Inscryption is not really a video game. No, it’s something more akin to a social experiment in D&D form. Say, something along the lines of what id Slay the Spire was loosely the starting point of a guided, wilderness-infused Dungeons & Dragons campaign where wolves and birds replace dragons and orcs. And a mysterious Dungeon Master who is naught but a set of creepy eyes and crawly hands plays out a number of unsettling characters and scenarios. Oh, and did I mention this whole experience situationally puts you in the shoes of a personalized character trapped on a floppy disk?

With that out of the way, Inscryption — created by indie-extraordinaire Daniel Mullens and published by Devolver Digital — is one of the most finely crafted experiences I’ve played recently.

Going into Inscryption, it’s best you experience things without knowing all that much about them. So much of this game is tied to mystery and the unsettling feelings that come with it. So for that purpose, I’m going to leave my definition in the introduction as most of what I will tell you. There have been so many occasions through this experience where I’ve found myself vocally asking, what is this game? What is this game? What is this game? And the charm to it is that it guides you through one hell of a wild ride in the form of a simple but satisfying card game. Art direction that’s familiar, if not so much so that it’s a little freaky and just enough side elements to keep a pace that will entice you to keep going. 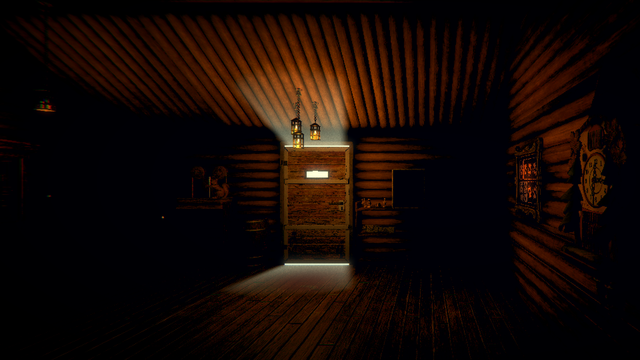 As of writing this, the most satisfactory answer I’ve come to is that Inscryption is a simple tabletop RPG that ties its progression to deck-builder mechanics. Its story is where the King of Games isn’t a spiky-haired pharaoh in need of a decent meal inhabiting the body of a whiny little child, but rather a kind and kind of creepy being seemingly trapped in a cabin. Who simply wishes to pass the time with a guest. And while I mentioned that the being is kind, it’s definitely not being so without the promise of reward. 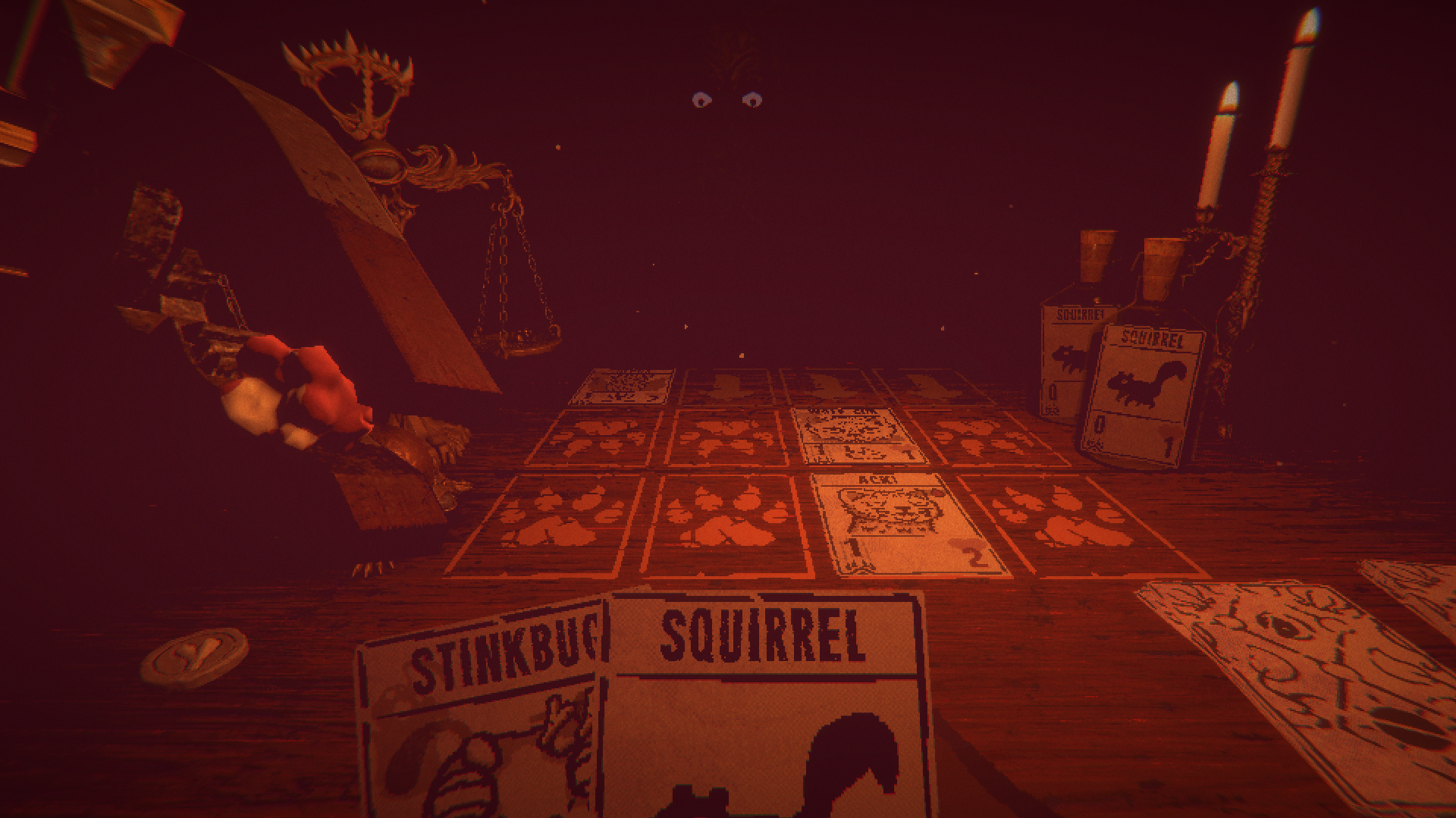 There’s a game mechanic tied to the title that I am not going to spoil for you because you really deserve to learn about it on your own. All I will say is that if you suck at card games as much as I do, you’ll quickly become familiar with this mechanic, and you’ll want to learn everything about it. While it isn’t one we’ve never seen before, the way that Mullens combines it with the simple strategies of the card game at hand makes it so that you aren’t likely to tire of the said mechanic.

Inscryption — Not another card game!

Even though it forms the base of gamification and progression in Inscryption, it refreshingly allows the story and atmosphere to breathe most of the life into what this experience is. When Bobby and I first talked about this game, we were both pretty burned out on card games being used as mini-games, or worse, as entire games! But with Inscryption, Mullens expertly crafts a competition that’s simple enough to grab hold of the right way, rewarding with its enticing progression and complementary enough to what’s going on with the game world around you that you never feel as if it’s a slog. 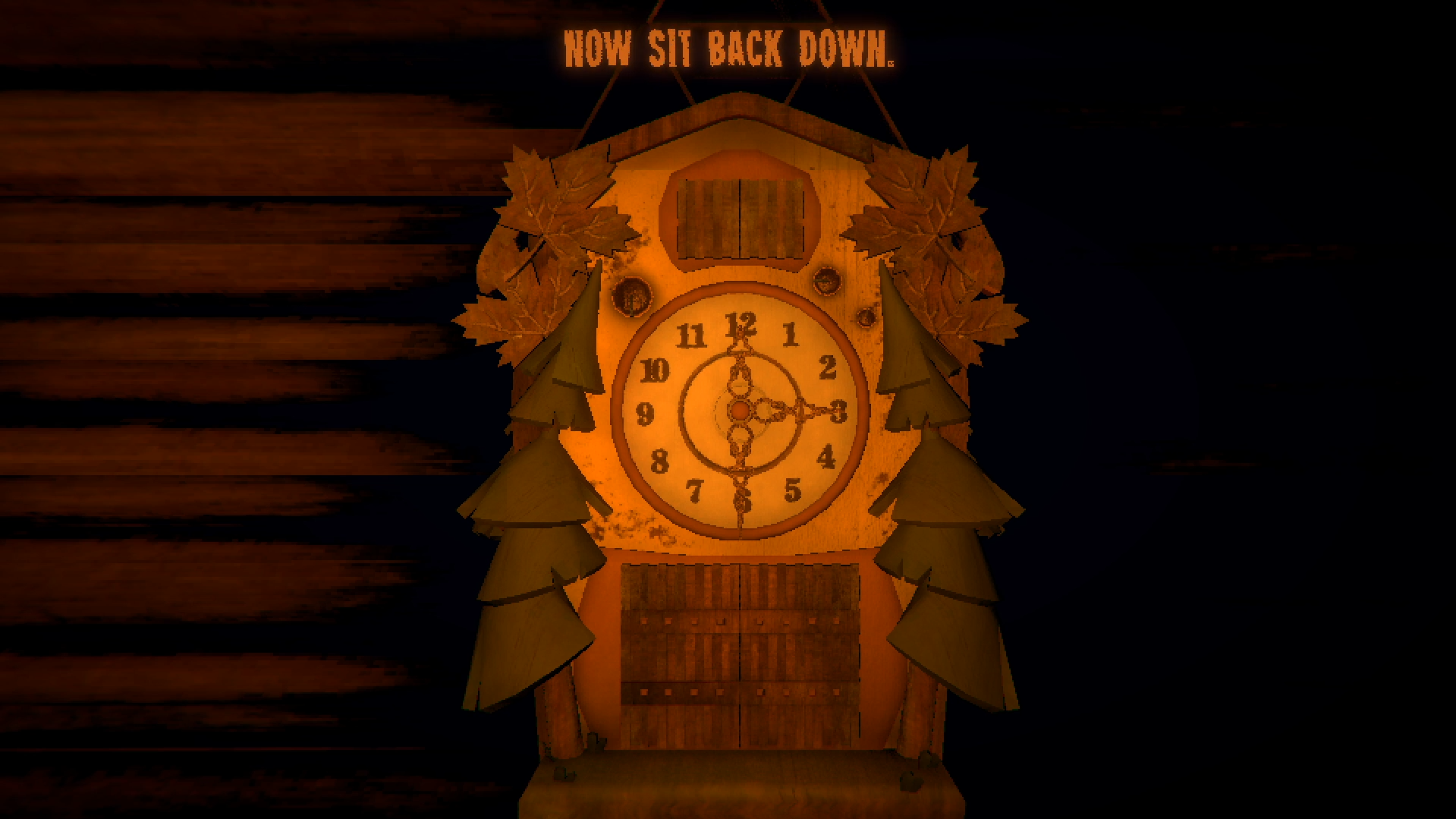 Each time you start a new run of the adventuring, the Dungeon Master will assign you a very basic deck. Battles also start off extremely easy to the point where they resemble a pinch of everything you’ve played in the past. Like Hearthstone, cards have a value for attack and a value for defence. However, they also have designated lanes they can attack or defend in unless they have the movement ability, which randomly moves them as a turn ends. Like Magic, they have a creature type they belong to, which in this case only becomes important as you collect totems [two-part statues used to provide abilities to creatures who don’t have them]. As you acquire more cards, you’ll start to collect abilities independent from totem abilities. These include things like the hypothetical ability of a bird to dive underwater, thus avoiding being attacked. Some cards have the ability to attack two targets on the diagonal axis’. There’s also a hilarious ability type that makes creatures so smelly that monsters will avoid attacking you. 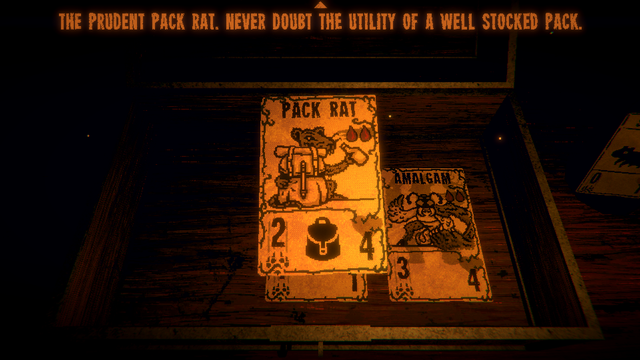 The scoring system is the most macabre part of this game, and I kind of love it! As the idea of self-sacrifice permeates Inscryption, the game’s life points are quite literally pointy parts of your life: teeth, blood and bones. Every time you summon a card, it requires that you pay a cost of blood through animal sacrifices of your cards in play or bone, which is accumulated as cards in play are destroyed. There is a pawn known as the Squirrel, which serves as a sacrificial token but can also be weaponized throughout the game if you are enterprising enough. When you attack the DM directly or they attack you, a tooth is put on a scale for each point of damage. The battle ends when one side of the scale has five teeth more than the other — unless it’s a boss battle, in which case, you’ll have to beat the DM by two sets of five teeth. Because teeth can balance out battles later in the game, become delicate games of walking the tightrope. It’s in those battles that Inscryption is at its best! 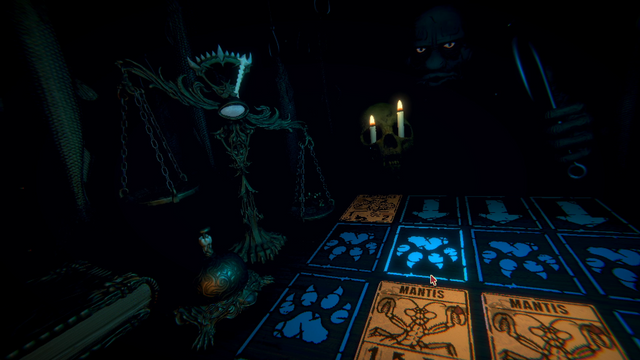 Another of my favourite elements of the game is the randomness of its game board and puzzles how they’ll force you to use your head. As I’ve already mentioned, the DM will let you get up and move around the cabin so long as you aren’t in battle. As you do so, you’ll come across a handful of puzzles that aren’t overly challenging. In fact, a couple of them practically solve themselves. But they’ll reward you with rare cards. Each time you sit down to start a new run, not one you are in the middle of, you will find that the tiles you can land on have changed. Tiles will seem overwhelming at first as they allow do things like allowing you to play Russian Roulette to either raise an animal’s attack or defence as many times as you are willing to bet your animal won’t be eaten by hungry travellers. a sacrificial stone allows you to add one animal’s ability to another for the low, low price of losing the card you sacrifice. There are also a number of tiles inhabited by NPCs portrayed by the DM in different masks. They’ll offer you rare cards, totems and other helpful items. The total randomness will help to keep you coming back because you’ll literally choose your tactical approach in the way you choose to move. 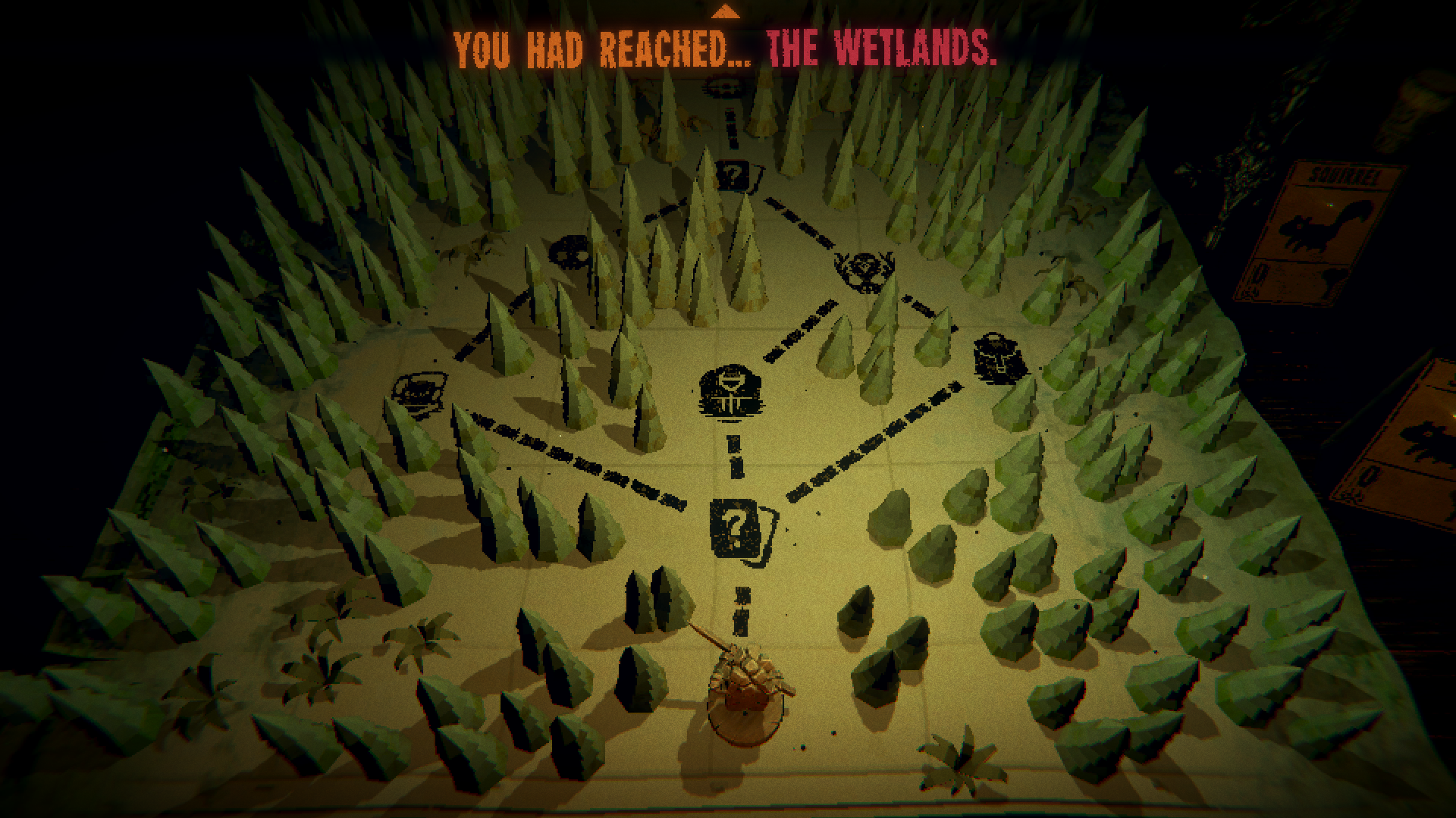 How this game appears has no business being such a part of how successful it is. But then again, part of the monotony of card games is that they often don’t have much atmosphere. So the fact that Inscryption has literally flashes of it throughout is likely part of its charm. True to being a game that lives on a floppy disk, the graphics come across as 90’s point-and-click adventure meets Saturday morning cartoon. Pixels float around the cabin as if they were grains of dust, giving a hauntingly dissonant feeling of helplessness. Animals tremble and seemingly switch facial expressions making you feel more than just a little shitty for the sacrifices you’ll make. If I have one gripe with this game at all, it’s that the sound design is overl simplistic and repetitive for such an otherwise fresh and undiluted atmosphere. 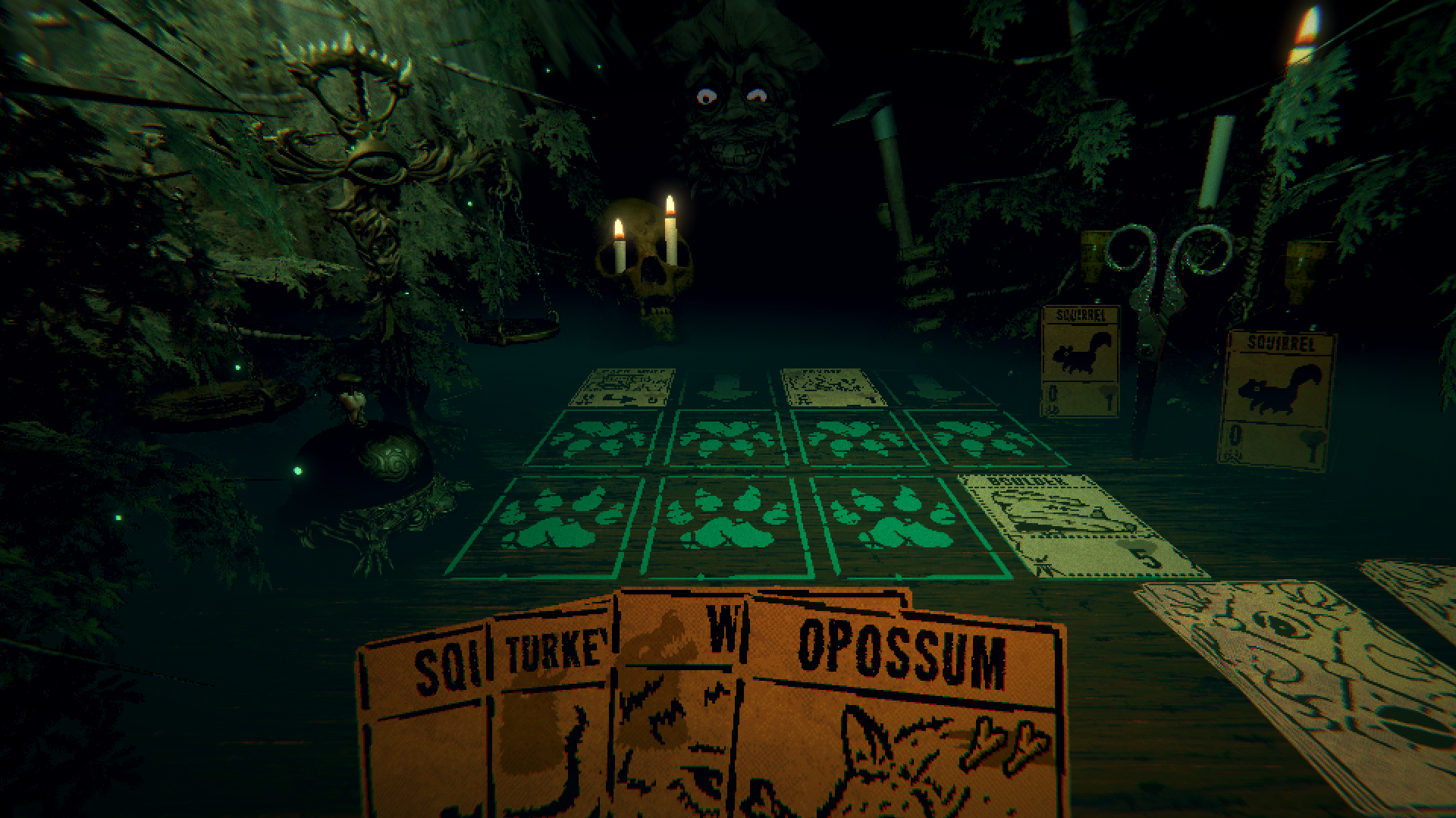 I’ll end this by giving every prop and kudo possible to Daniel Mullens. Inscryption is a game that nobody should skip. It successfully does such a delicate dance of being a simple card game that leads you through a truly randomized RPG tabletop adventure that also kindly allows for the player character’s own adventure to work with it in tandem. If you don’t find yourself utterly confused, un-nerved and excited by this game that exists in an often dull genre… well, I posset that you’re already dead!