After a year where we were all a little hard-pressed to find anything remotely light-hearted, it’s totally fair to want something that is. Recently, I’ve found a little bit of relief from the hard darkness in the super bright, super soft world of Peachy Keen Games and Whitehorn Digitals’ Calico.

But while the world of this bright slice-of-life sim is sweet and cute, there’s a lot here that’s more than a little rough around the edges. It appears that it may take a little time for the scruff surrounding this game to be smoothed out.

To be fair, this is a Kickstarter-backed game made by two people on a budget of just over $70,000, so it’s going to take time and a community to make this island home!

Calico takes its inspiration from the likes of Animal Crossing and Stardew Valley  — almost a little too closely at times!

You are a newcomer to a Japanese cherry blossom-soaked island where islanders live in harmony with animals to the point where most residents try to emulate animal appearance and behaviour in their everyday life. Seriously, there is a club of people who believe they are wise old owls and a young witch who makes a potion to turn herself into a cat. 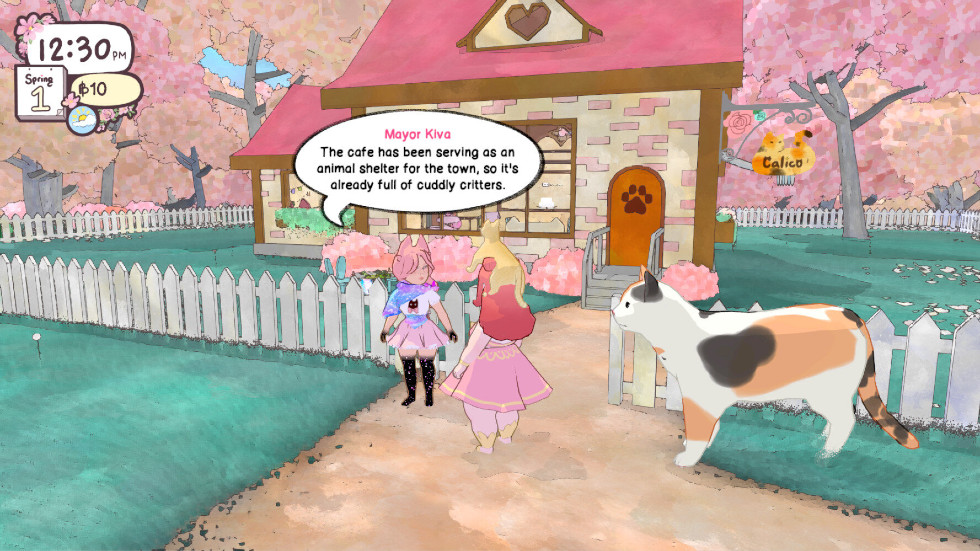 The locals are quick to embrace your arrival because your dear Aunt ran the island’s animal cafe, and now it’s your turn to do so. You must decorate, magically bake in and fill the cafe with animals to give it a personality that will appeal to those on the island.

Of all shapes, sizes and colours

It’s very clear through the aesthetic, mostly female demographic of islanders and the sales pitch of running a cat cafe on an island populated by witches and magical girls that this is intended for a female audience. However, Peachy Keen Games has done a lot to ensure there’s a strong message of inclusion and diversity present in Calico. It’s thanks to this inclusion this I see the game’s player base becoming a mosaic of sexes, creeds and cultures.

Many of the islanders will share with you that they have special relationships with members of the same sex. And the messages around love are almost all quite positive. There is a young female couple that very openly state they use their love as well as their shared talents of magic and botany in order to create the most beautiful of gardens.

There’s also a character who is non-binary. Their existence was one that I was delighted to see — especially because their character is given special care and attention. The fact of their identity is only hinted at in the text and then confirmed in a guide that provides you pronouns and personality reflections.

I was also excited to find a character in the city wearing a hijab as I can’t recall the last time I’ve seen one in gaming aside from the problematic appearances in Prince of Persia. 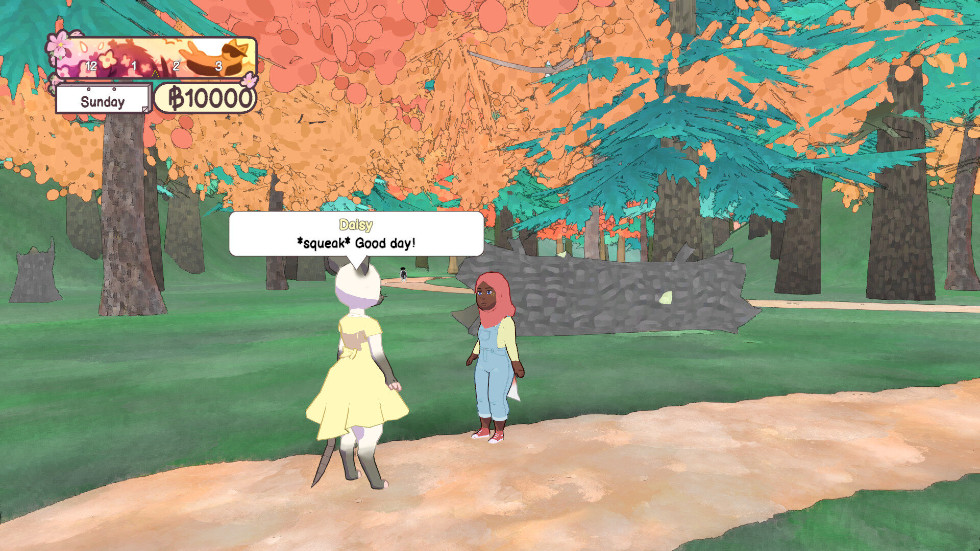 Skin colour and personal appearance also play a large part in Calico‘s creed as there is a myriad of both real and fantastical skin colours, clothes and accessories to choose from in a rather robust character creator that skews more to female and non-binary appearance but lets you express yourself more than enough.

Calico puts great caution into how it builds its islanders as well as the player character. The game very seldomly brings gender or culture into the mix. Personalities become the metric by with you form relationships. You’ll need to know the types of decor and animals that appeal to the crowd you want in the cafe. This is where the game is at its best. Sadly, it’s best doesn’t last very long at this point.

Being a game that is made by only two people using basic Unity development as more than just a foundation, Calico suffers from a mechanical temperament that rivals my old asshole of a cat Max. It’s currently more than a little rough around the edges when it comes to controls for things like running and jumping, which are incredibly finicky. The game recommends that you use a controller for the best playthrough experience, but going in with mouse and keyboard becomes a nightmare — mainly in that there is no ability to remap and limited ability to fine-tune.

Overall, physics becomes quite unstable as you go on playing. Characters’ pathings will often cause a lot of clipping and even a few pileups. I’ve had instances where a group of characters have tried to get into the cafe and have instead just become stuck in the doorway. Animals in your cafe or people’s homes will strangely forget boundaries and just end up on a table or a chair. But let’s be fair, don’t your own pets just have a habit of finding their way onto the furniture they’re not allowed on?

Another major current problem is that Calico will begin to task you with doing things in your cafe to attract a certain customer. For example, Non-binary witch Ash wanted me to add some spooky elements to my cafe so that they would feel more comfortable. I  put out a spooky table and couch for Ash and went to tell them the good news. They thanked me and said they’d be by the cafe the next morning. Fast forward a few hours, and Ash never showed up.

There also just isn’t really all that much to do as of yet.

When you are making a slice-of-life simulator, your greatest worry should be that you’ve provided enough of an alluring experience to keep players coming back to your game day after day. The need for a reason to boot Calico up once or twice a day just currently isn’t there for me. In short, there’s a lack of urgency to the game that ruins a lot of the experience for me.

In the first few hours, you’ll find yourself introducing yourself to residents and offering to do fetch quests in order to obtain their help in opening up the island’s many biomes. The fetch quests are often quite simple as they involve mostly running from point a to point b.

There is also very little that’s interesting in collecting animals. You are not required to do any sort of taming or befriending, simply walk up to an animal and tell it to follow you if it’s small, or pick it up and carry it back to the cafe — I suggest doing the later to save a lot of time!

Larger animals can be mounted and rode for laughs and faster travel times. When you arrive at the cafe, simply tell your animal to stay put and congrats, they are yours! This lack of any real struggle to make friends results in a pretty joyless experience.

Make no mistake; there is a dark, rigid underbelly to this bright and fluffy world!

The darkness is perhaps best summed up by being compared to the bright coastal in-game “Cutie City.” It’s a bustling metropolis full of black-furred business cats rushing around doing business things. And while this is in stark contrast to the much more relaxed villagers found in the mountains and the countryside, they also share an affinity for business. Almost every resident of the island wants to sell or trade you something, and that’s where Calico struggles a lot. There is no great urgency to the island’s capitalist culture because you are fine with simply getting by. 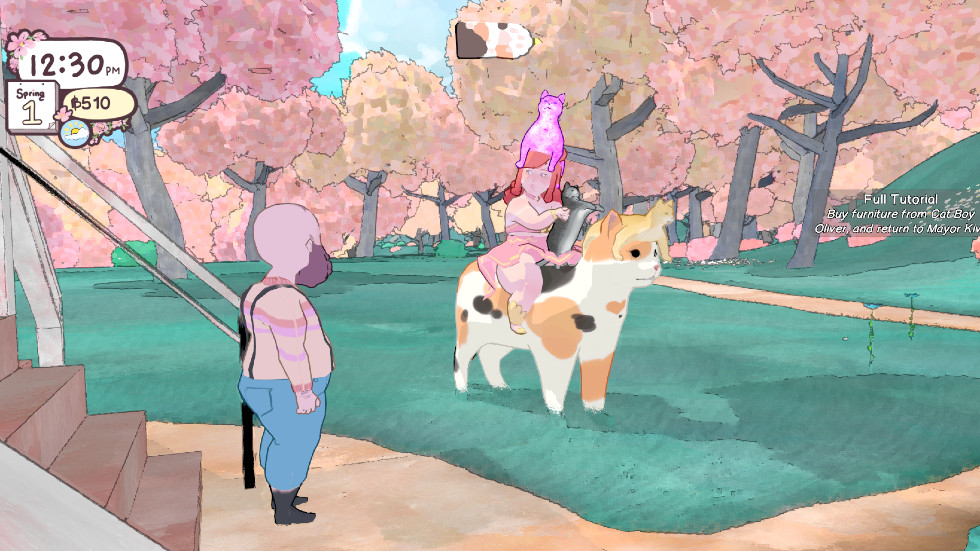 We aren’t talking about losing your Uncle’s farm if you fail to make a dollar a day here, nor are we talking about having to pay off a lavish house debt. Rather, Calico asks that you do nice things for people and shop from them in order to progress your adventure.

Residents will reward you with new cafe recipes, decors, clothes and at the very least money for the previously stated goods. As you put these rewards and purchases to use, you’ll start to make friendships and see the island come to life, but that life becomes everything, and there’s very little outside of that to Calico for the time being.

Calico has long been a Kickstarter community-based game and it shows. If you are asking me, this is one of those Early Access games that require you to get behind them for a while before they become what they are truly meant to be. And that’s totally fine! To be fair, this is a two-person team who fully understands that they are going to have to work with the strong community they’ve built in order to get this game to the finish line. From what I’ve seen, they are making a great effort with a Day One patch having already dropped and more patches on the way. As it stands, I can’t recommend this game just yet, but with more updates, things will likely shift into being recommended.

Reviewed on: Nintendo Switch, Xbox One