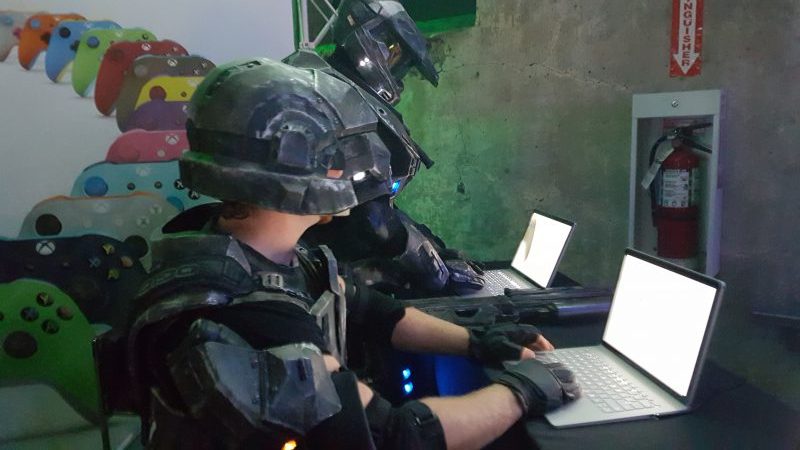 It’s that time again when Xbox Canada puts on their annual showcase that gives media and fans an opportunity to test out the top games hitting Xbox One in Fall and the New Year. X16 featured titles like Gears 4, Cuphead, Halo Wars 2 and Steep just to name a few. Despite the variety of games that the event showcased there were definitely ones that stood out from the rest. Although it wasn’t the first time Xbox showed off Cuphead the indie title still managed to turned heads a year after it showcased at X15. Usually I’d be disappointed to see a game return to a preview event but this game is the exception. Cuphead is a run and gun game that follows our hero, Cuphead, after he lost a bet with the devil and now must repay it. If you get a chance to play this game, do it! This game offers a refreshing take on side scrolling shooters that is long overdue in the industry. Not only is it challenging by throwing a slew of enemies at players but also continuous boss battles, that really test gamer’s abilities. The gameplay is definitely a winner but it’s its artwork that is the key to the game. Studio MDHR was inspired by 1930s cartoons produced by Disney and Grim Natwick and committed to staying true to that animation style. In Cuphead every animation in the game is hand drawn frame by frame. This pays off well as the game is art style often distracts you from playing; but unfortunately the time needed to produce this game has resulted to the studio being mute about its release date. Either way when this game comes out it will definitely be one to watch. The action-adventure shooter developed by Comcept and Armature Studio for Xbox One. The game attracted gamers with its female hero, Joule, and her robotic dog companion, Mack, kicking butt in the reveal trailer that made people want more. Recore takes place after Earth is infected by a disease called Dust Devil and the attempts to combat the disease have failed. In a last effort to save humanity Corbots, robot assistants, go to another planet, Far Eden, to make the planet habitable for humans. Meanwhile Joule and others travel to Far Eden in cry-sleep to live disease free. After Joule awakens she finds that Far Eden was not the Promised Land everyone wished, and the Corebots have gone rogue. Aside from shooting enemies you solve puzzles to move your way through different sections of the map. Another cool feature of the game is the weapon mechanics. Joule’s gun doubles as a grapple which allows her to unlock doors and carries four different colours of ammunition. The colours match corresponding enemies indicating their weakness to the respective colour ammo. This makes it more challenging when you’re confronted with boss battles that have enemies of various colours. The puzzles combined with well thought out combat makes this game definitely one to test out.

This one is probably the most anticipated game that will be hitting the Xbox One this Fall. Gears of War 4 takes place 25 years after the destruction of Imulsion, Locust and Lambent on Sera. Now after the war the number of humans is scarce; which forces the reformed Coalition to build a wall to protect humanity from the outside, and carry out martial law that restricting access to the outside world. However there are some humans, Outsiders, that disagree with the Coalition and that raid Coalition territories. The game focuses on Marcus Fenix’s son, J.D Fenix, and his friends that have not encountered war and must fight off a new threat. Although the gameplay is similar to previous titles in the series, there are gameplay mechanics that changed and enhanced the overall experience. Along with new weapons there is a new feature called Combat Knife that allows for new ways to perform melee executions. Further development of close quarters combat also includes shoulder charges that’s performed to knock enemies off-balance or to perform takedowns. The new features will allow gamers to refreshingly jump back into Gears and find out what happened after the previous one.

Stay tuned to our YouTube channel for our interviews with the developers of some of these titles and more coverage from X16.