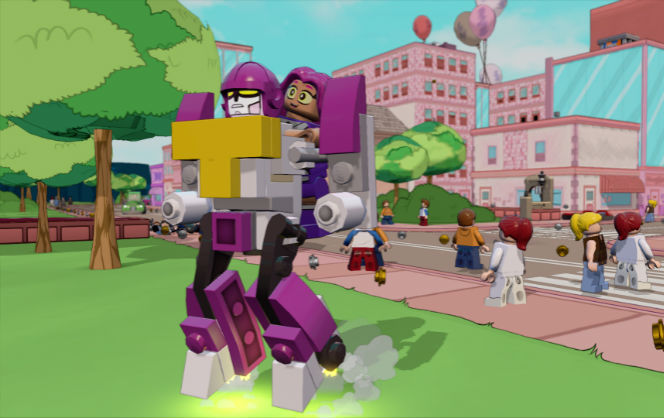 WB Interactive has announced that five collectable, expansion packs for LEGO Dimensions will be released September 12th, 2017 making up Wave 9 of the LEGO toy and video game hybrid. Team and Fun packs will be based off two very popular Cartoon Network licesnses, Teen Titans Go! and Powerpuff Girls. The wave will also include a Fun Pack based on the Tim Burton film, Beetlejuice.

The Teen Titans Go! packs will include an original episode of the show, exclusive to LEGO Dimensions. The episode details how the super team of teen super heroes discovered the LEGO multiverse.

The Teen Titans Go! Team pack includes LEGO minifigs of Raven and Beast Boy as well as the 3-in-1 T-Car which can also be rebuilt into a Forklift and T-Plane. As well, players can transform the Spellbook of Azarath into Raven Wings, and the Giant Hand.

The Teen Titans Go! Fun pack includes a LEGO minifig of Starfire with her special abilities to fight baddies and solve puzzles. Players can also build the 3-in-1 Titan Robot and then reconstruct it into the T-Rocket or Robot Retriever.

The Powerpuff Girls Team Pack includes LEGO minifigs of the super-powered sisters, Blossom and Bubbles as well as their 3-in-1 Octi that can rebuild into the Super Skunk and the Sonic Squid. The PPG Smartphone can transform into the PPG Hotline and the Powerpuff Mag-Net.

In the Powerpuff Girls Fun pack, players will find a Buttercup LEGO minifig as well as the 3-in-1 Mega Blast Bot that can be rebuilt into the Ka-Pow Canon and Slammin Guitar.

Blossom, Bubbles, and Buttercup each provide access to the Powerpuff Girls Adventure World where players can unlock iconic locations such as Pokey Oaks elementary, Rainbow Land, and Professor Utonium’s lab as well as a brand new, Battle Arena!

The Beetlejuice Fun pack comes with a LEGO minifig of the man himself, Beetlejuice as well as Saturn’s Sandworm that can be rebuilt into the Haunted Vacuum and the Spooky Spider. Beetlejuice also unlocks an exclusive adventure world and battle arena.