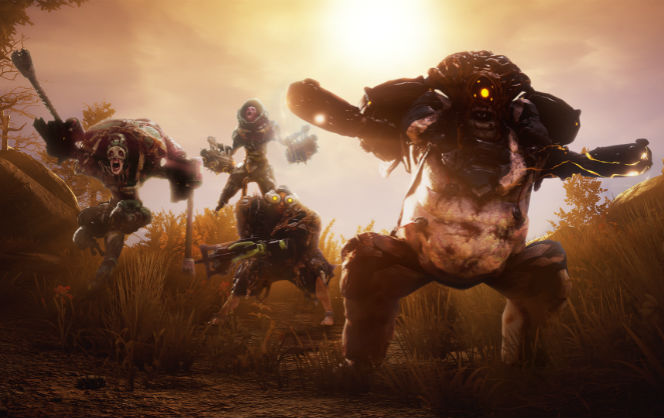 Warframe’s recently released expansion, Plains of Eidolon, is getting even stronger. Indie Canadian devs and publishers, Digital Extremes, have announced that the Ghoul Purge Bounties are coming to the expansion. Featuring a deadly four-pack of Grineer Ghouls born from sacks in the earth, each with extensive attack patterns and new weapons, and the separate ability for players to customize their Landing Craft with quality-of-life showcase options. This update is totally free and available now for PC.

The grounds of the Plains have erupted with vile beings of Grineer origin – repugnant Ghouls that overrun their victims in a gruesome mass of limbs, toxin and violence. Players will encounter them via a Ghoul Alert, or by stumbling across their graveyards (where they are “born” from the ground), through Incursions or Bounties.

Four in all, these disgusting new Grineer include the Rictus Ghoul, who wields a deadly, ridable buzz saw; the Auger Ghoul, armed with dual flame-thrower that double as drills for limbs, digs down into the earth in one spot, disappears, and surfaces in another for a surprise attack; the Devourer Ghoul, a hideous, fat, pustule-laden beast with a lengthy tongue, spiked fists, and a jet pack to thrust him forward to shred Tenno to bits; and the Expired Ghoul, who dons bomb-spiked gloves to beat and detonate enemies to pieces.

To counter this plague upon the Plains, Tenno can arm themselves with a handful of equally authoritative weapons. Prepare to wield the majestic Corinth, a double-barreled shotgun that’s commanding and explosive up-close; the sleek, deadly Gunsen, a steel-bladed, fan-like weapon that slices the throats of unsuspecting enemies in a mini-second; the satisfyingly brutal four-barreled Quartakk rifle; and the Grineer favorite, a compact, high fire-rate, automatic Uzi dubbed the Stubba.

The best is always last! Tenno can now personalize and decorate their own Personal Quarters with an assortment of cool items. Customize the Landing Craft with a mini-stage, then select from posable Warframe figures, companion toys and beds, wallpaper, a fish tank and more to create a mini diorama of one’s own making. Plus, players can now invite a friend inside to visit!