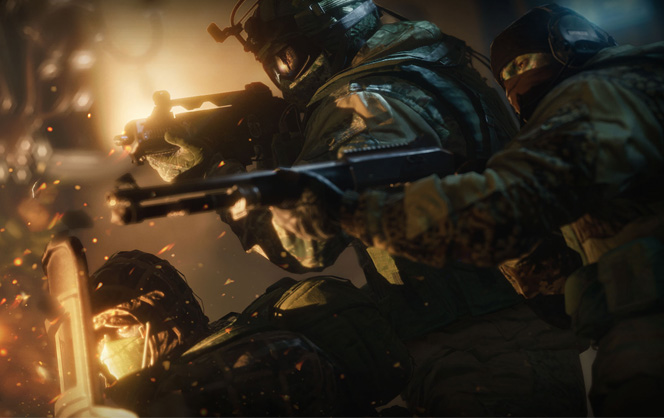 Today Ubisoft released an awesome new trailer, and gave attendees at Gamescom 2015, a peek into some new and exciting features in Tom Clancy’s Rainbow Six Siege.

First off is the new feature called Spectator Cam, a mode which allows an 11th player to take part in a 5 vs. 5 multiplayer match, as an observer. They will be able to watch other players, in real time, either from a first-person view or from the newly introduced, Tactical View. In Tactical View, observing players will be able to follow around individual players all over the map or observe all players, objectives and maps. An entertaining way to be a part of the game, without having to deal first hand with n00bs! A beta form of the cam will be available on the PC at launch on October 13th, and for the PlayStation 4 and Xbox One in early 2016.

Also announced today was the Kanal Map, a playable map based around an industrial area in Hamburg, Germany, with buildings, waterways and bridges that players will be able to utilize for unique vantage points and sight lines. Another new feature added is the addition of GSG 9 Operators.  The German GSG 9 counter-terrorism unit adds four types of operators:

The Bandit – basically the MacGyver of the bunch, they are very resourceful and can adapt to their environments. Bandits carry an electrical device made out of a car battery, that can electrify metal surfaces, even barbwire.

The Blitz – an expert on the front lines who carries a ballistic shield, with a row of eight flash bang grenades to take out surrounding enemies.

The I.Q. – acting as an engineer, she carries a sensor on her wrist that can detect electronic devices by scanning the electromagnetic spectrum, giving her audio and visual feedback.

The Jäger – equipped with a mountable ADS-MK IV “Magpie” that can take out incoming projectiles, this technician uses heavy machinery  to get the job done!

Tom Clancy’s Rainbow Six Siege will be available on October 13 for the PlayStation 4, Xbox One, and the PC.

Get Ready for Battlefield Hardline: Robbery, the Newest DLC for Hardline