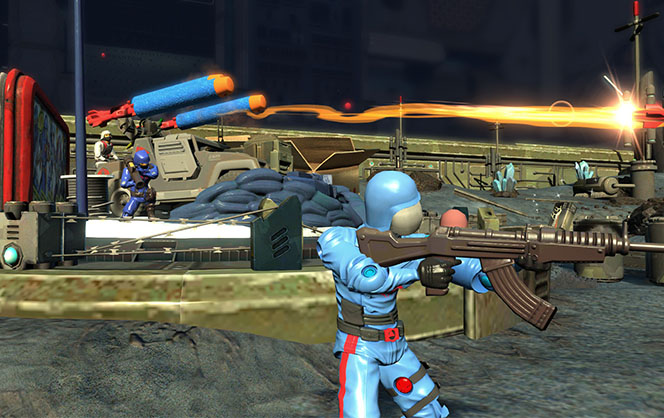 You can thank Ubisoft for helping to bring back our childhood memories, with the launch of Toy Soldiers: War Chest Hall of Fame Edition, available now for the PlayStation 4, Xbox One and the PC!

Toy Soldiers: War Chest Hall of Fame Edition is a super-charged, super fun strategic defense mixed with action game, that allows players to control toys and action figures. With the Hall of Fame edition, players will be able to take control of licensed armies, based on classic 80’s and 90’s iconic figures, including He-Man and the Masters of the Universe  and G.I. JOE featuring Duke and Cobra Commander. Together, they also join Ezio and the Brotherhood of Assassins from the Assassin’s Creed 2 series. Like the standard edition of the game, players will also be able to choose between four themed armies, Dark Lord, Kaiser, Phantom and Starbright, each with their own unique play styles and abilities. Those who own the standard edition will be able to download individual Hall of Fame armies or all four in the Legendary Heroes pack. Players will be able to choose from three gameplay modes; a 15-map campaign mode, split-screen co-op and 2 vs. 2 multiplayer, which allows up to four friends to separate into two teams and take turns defending their boxes, while building, defending and controlling turrets.

For those who like to test their strengths and see how long they can last against waves of enemies, Weekly War and Survival maps are also available gameplay modes, and offer more challenges than the campaign mode.

Toy Soldiers: War Chest Hall of Fame Edition is available to download now for $29.99, on the PlayStation 4, Xbox One and Windows PC.

8 Minutes Of the Solus Project