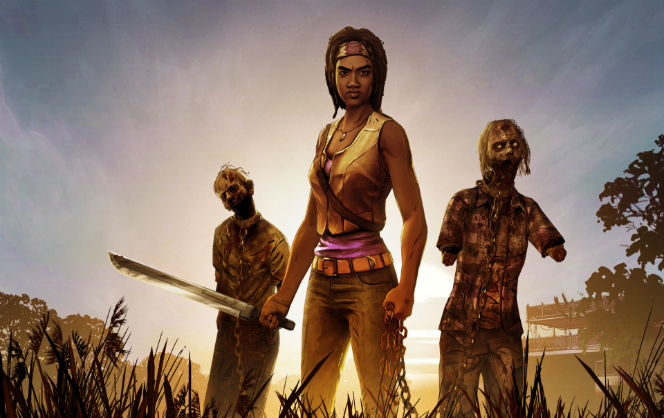 The second episode titled “Give No Shelter” of the Michonne stand-alone series from Telltale Games releases March 29th on PC, Xbox 360, Xbox One, PS3, PS4, Android, and iOS! The series will conclude with next month with episode 3, “What We Deserve.

The Walking Dead: Michonne – A Telltale Miniseries stars iconic, fan favorite badass Michonne from the best-selling comic series The Walking Dead, and the TV show of the same name. The miniseries deals with her disappearance in the comics between issues 126 and 139. The story explores Michonne and how she’s coping with her past full of loss and regret and what took her away from Rick and the group, and what led to her return.

In Episode 2, Give No Shelter, “a daring escape from the floating colony of Monroe sees Michonne, Pete, and Sam running for their lives. An all too brief is soon shattered; the leaders of Monroe don’t forgive and forget. With memories of her daughters bleeding ever further into Michonne’s blurred reality, her world is becoming increasingly fractured…just at the point where she’ll need all of her skills to survive.”

Here is a trailer highlighting some of the choices from Episode 1: