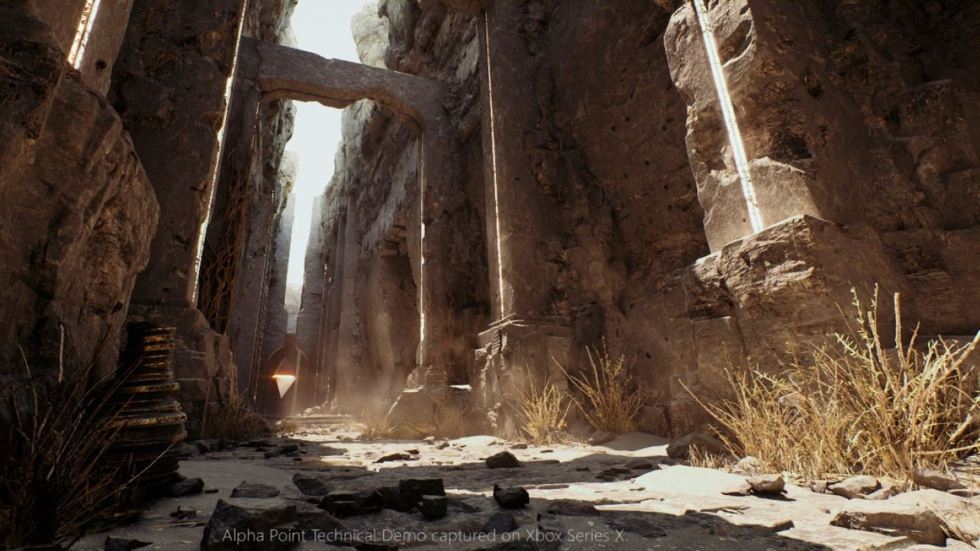 During GDC 2021, Gears of War developer The Coalition revealed a technical demo of what the studio is trying to do with the latest iteration of Unreal Engine 5. The demo is internally known as Alpha Point with the developer confirming that the pair of videos released to the public is in no shape or form “represent a game product.”

First look at the #AlphaPoint demo! An insight into what's possible with #UE5, from its next-gen features such as Nanite, which allows for unlimited triangle budget, and Lumen, which allows real-time lighting with none of the traditional overhead tasks. https://t.co/6lx76IbgCG

It does, however, give us an idea of what Epic’s engine is capable of in the right hands. The first video is a character rendering test featuring a test subject that showcases what the studio is created with Unreal Engine 5 – a highly detailed figure with intricate details on his face, his hair and beard, and his eyes.

Alpha Point was another showpiece from The Coalition featuring gorgeous real-time lighting and ray tracing, powered by Lumen. The other technology we see in the demo is Nanite, something we saw last year when Epic Games revealed an in-game demo running on PlayStation 5.

Here’s what Epic Games had to say about Lumen and Nanite last year:

Nanite virtualized micropolygon geometry frees artists to create as much geometric detail as the eye can see. Nanite virtualized geometry means that film-quality source art comprising hundreds of millions or billions of polygons can be imported directly into Unreal Engine—anything from ZBrush sculpts to photogrammetry scans to CAD data—and it just works. Nanite geometry is streamed and scaled in real time so there are no more polygon count budgets, polygon memory budgets, or draw count budgets; there is no need to bake details to normal maps or manually author LODs; and there is no loss in quality.

Lumen is a fully dynamic global Illumination solution that immediately reacts to scene and light changes. The system renders diffuse interreflection with infinite bounces and indirect specular reflections in huge, detailed environments, at scales ranging from kilometers to millimeters. Artists and designers can create more dynamic scenes using Lumen, for example, changing the sun angle for time of day, turning on a flashlight, or blowing a hole in the ceiling, and indirect lighting will adapt accordingly. Lumen erases the need to wait for lightmap bakes to finish and to author light map UVs—a huge time savings when an artist can move a light inside the Unreal Editor and lighting looks the same as when the game is run on console.

The Coalition has moved away from Gears 5 turning to a new project using Unreal Engine 5 and will be using UE5 for multiple projects in the future. If you want to see the entire GDC 2021 presentation from The Coalition, the hour-long presentation is on YouTube.