There’s always one thing that I can say pulls me into the world of any game I’m playing – a good art direction. I’ve been interested in the artbooks of various video games over the years and have purchased some really excellent pieces for my collection and with Ubisoft’s Assassin’s Creed Valhalla, I’m finding myself invested in the world post-game. 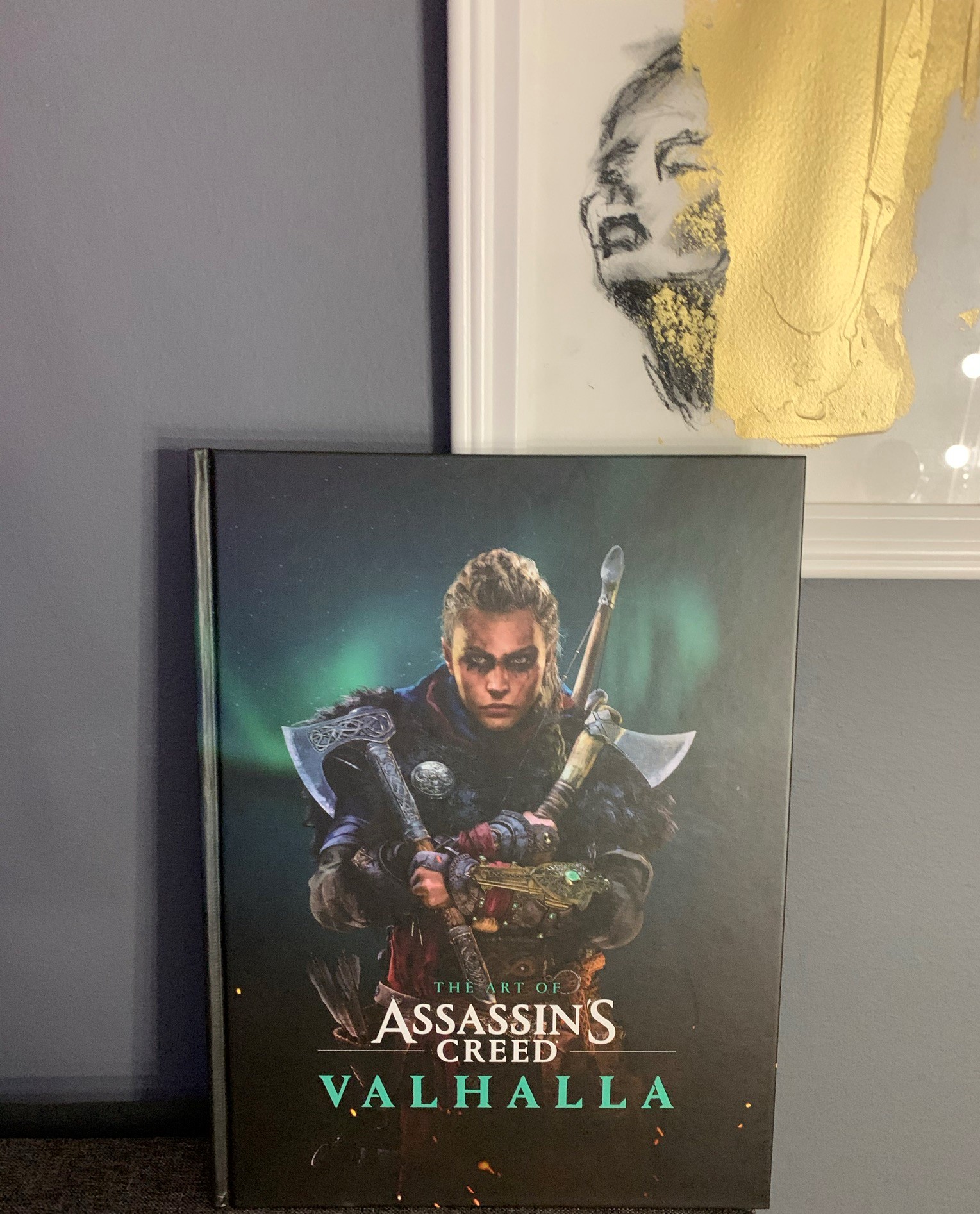 I’ve spent over 150 hours completing as much of the game as I could and the one thing that’s been a huge draw for me is how beautiful the world is and how exciting some of the character designs are. The older I get my interest in collecting things I can put on a shelf and display to the world – lately, it’s been coffee table books that showcase the immense talent each video game employs to bring to life these massive video games.

Dark Horse and Penguin Random House launched a comprehensive book that features a visual journey of Assassin’s Creed Valhalla. It’s a massive 192-page hardcover that features Viking life in such a fascinating way and covers a lot of the things you’ll encounter throughout England. I fell in love with the world presented to us in the game this past November and a lot of what made me enjoy my time with the game is how colourful the countryside of England is. Vast, rolling hills that stretch for miles, snowy peaks to the north and exploring the former defensive fortification Hadrian’s Wall – which stood at 135km in length. 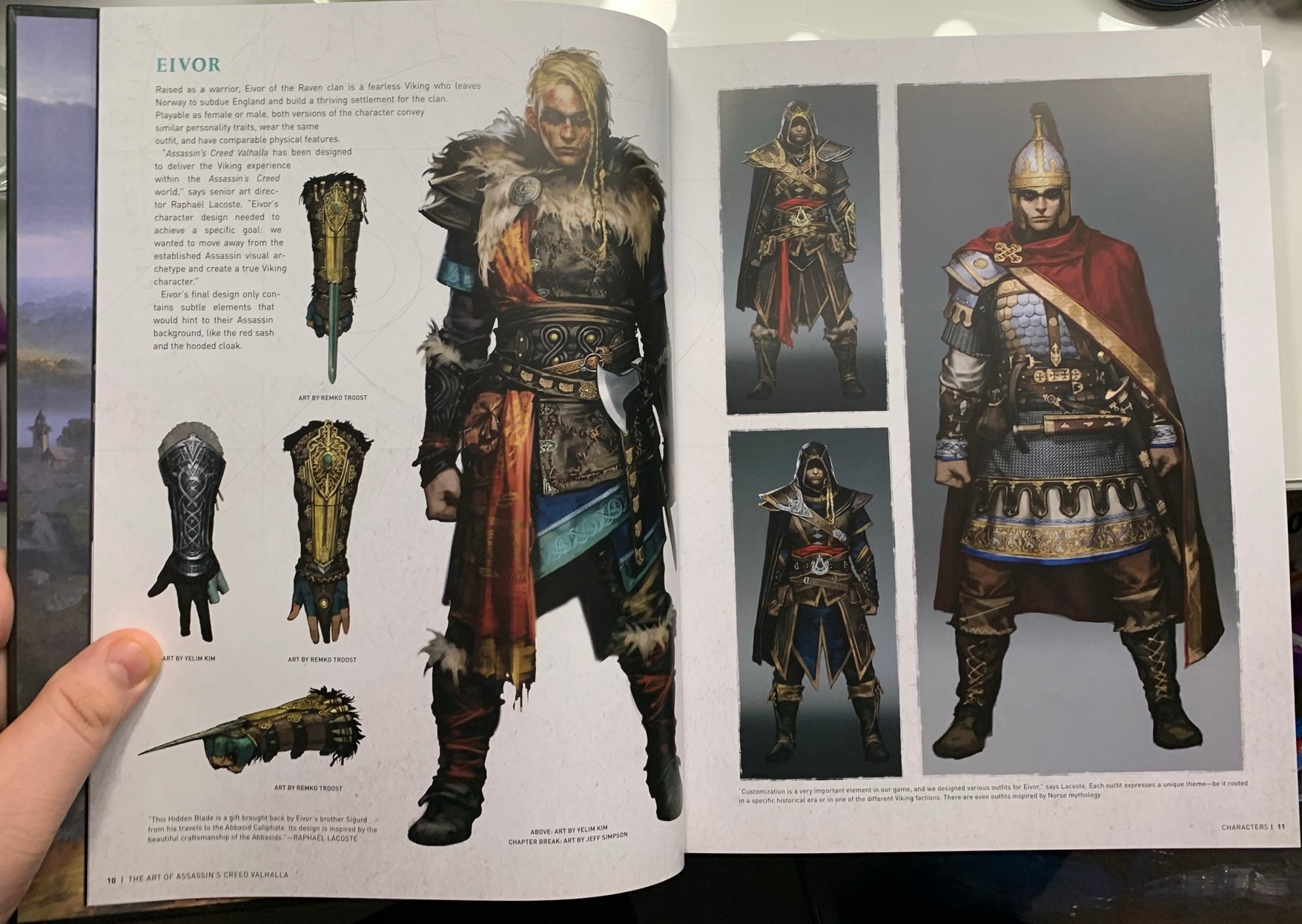 The Art of Assassin’s Creed Valhalla kicks off with a foreword from Raphael Lacoste, Art Director at Ubisoft working on the series. He explains that before the game went into production the team visited England, Denmark, and the Lofoten Islands in Norway. Crafting a game is never easy but by visiting the locations in real life, these trips help craft memorable moments in-game for players. The overall job an art director has is to instill and convey moments onto the player which is done through the locations available in-game.

Each chapter within the book ranges from the characters you’ll meet, to the locations you’ll visit and other places of importance when telling a story of this calibre. The first chapter focuses on the main cast and features Eivor, Sigurd, Basim, Hytham, we get a look at how these characters were created and brought into the world of Valhalla.

“Assassin’s Creed Valhalla has been designed to deliver a Viking experience within the world of Assassin’s Creed,” says Raphael Lacoste. “Eivor’s character design needed to achieve a specific goal: to move away from the established Assassin visual archetype and create a true Viking character.” However, these are still subtle hints that there is still an assassin hidden with the red sash and hooded cloak.

Concept artist Yelim Kim mention s that when designing Eivor, the team at Ubisoft looked at a ton of pop culture references and one that stuck out was the tank fight from Ghost in the Shell. 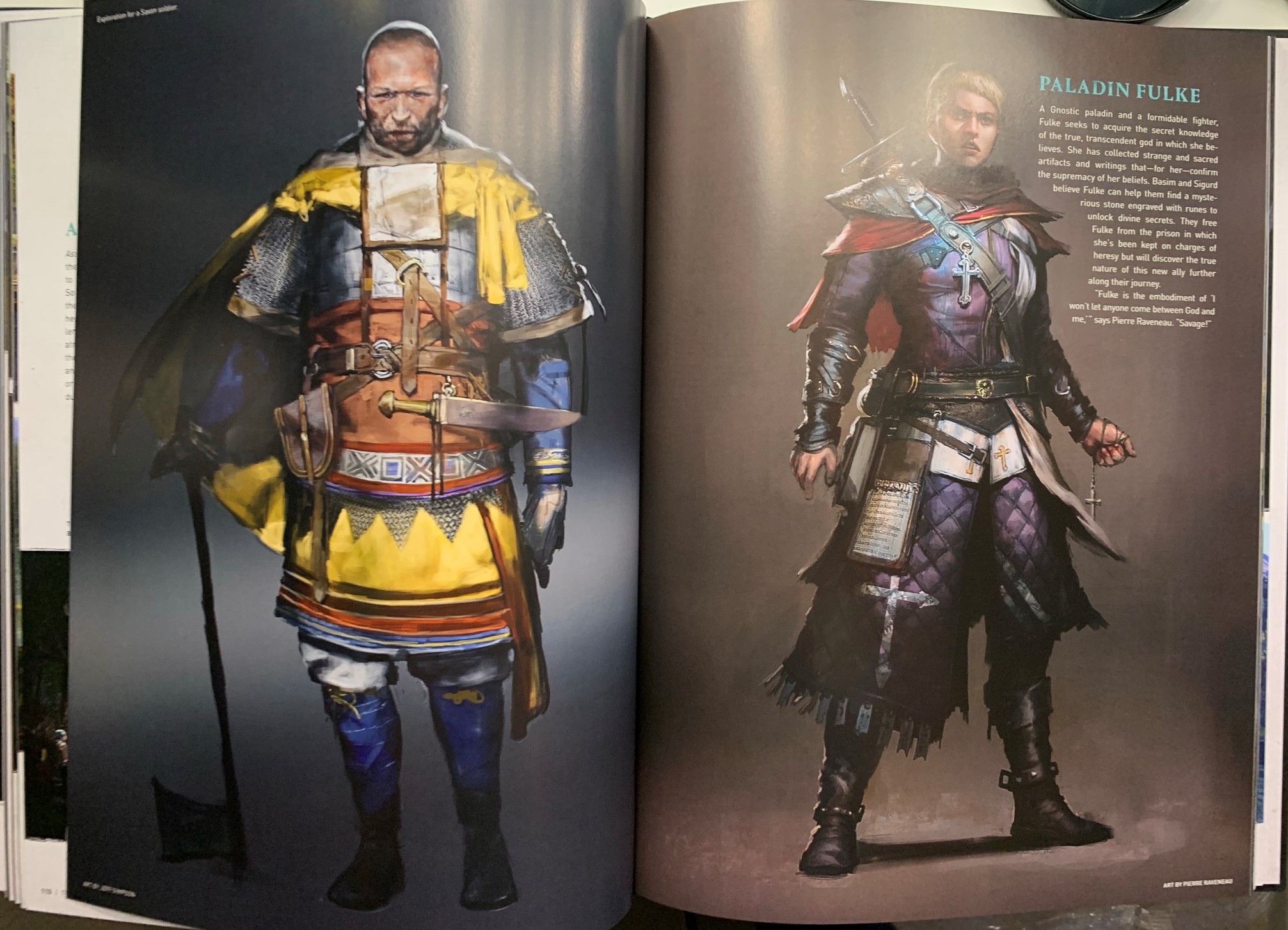 In chapter two, we look at the locations of Assassin’s Creed Valhalla. “After Egypt and ancient Greece, Norway offers a fresh setting for our players,” says Lacoste. “During our scouting trip, we took a lot of pictures, recorded sounds, went hiking in the Lofoten Islands.” Having recently revisited both Origins and Odyssey, I can attest to how different the world feels when compared to the sunny, warm climates of the previous two titles.

The Norse were known for their masterful shipbuilding. Their longships in particular helped them not only raid settlements but were used to travelling long-distances. In a testament to their sturdiness, the Norse travelled across the Atlantic Ocean to reach North American in 1000 A.D and settled in what is now known as Newfoundland. 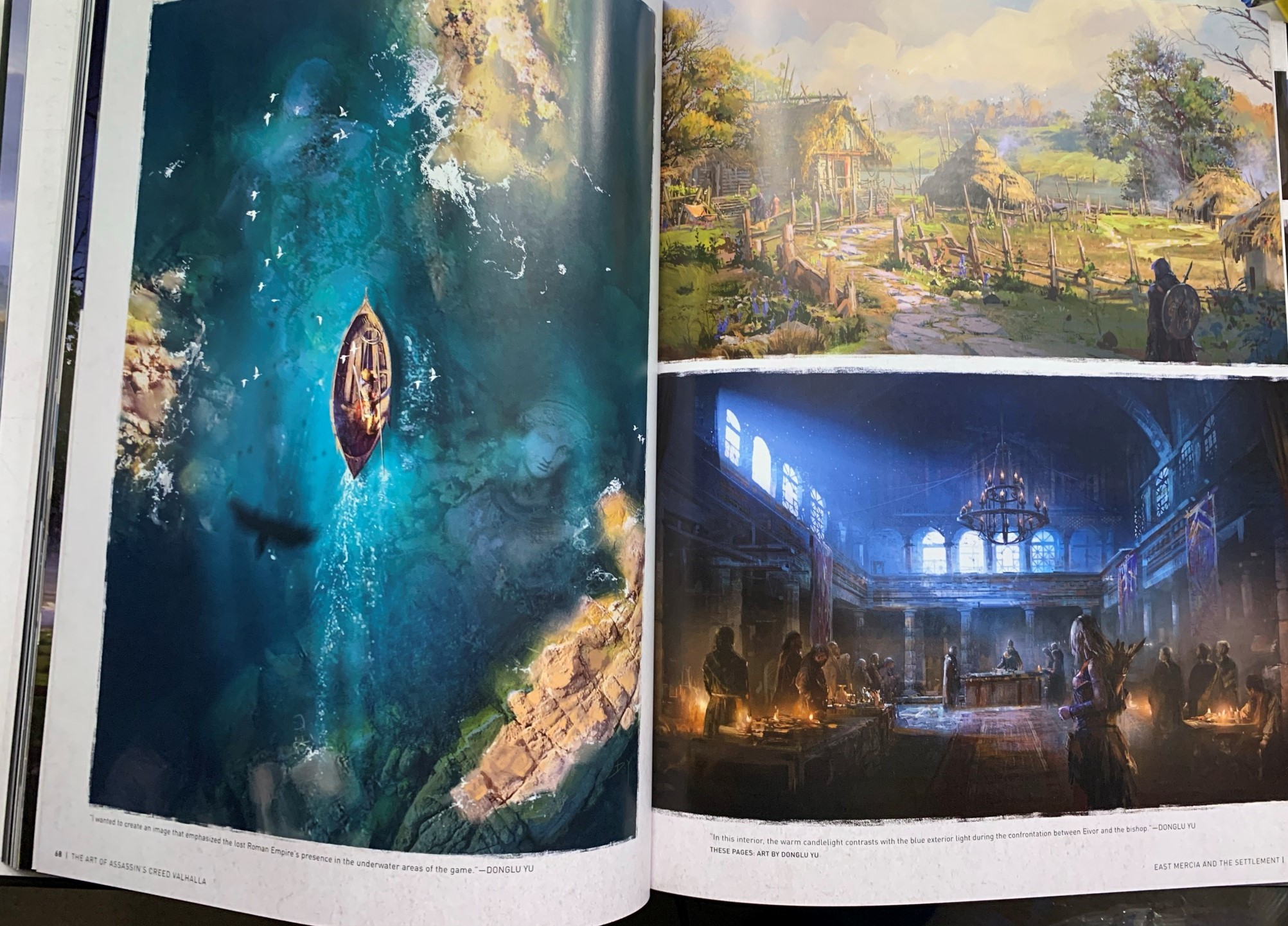 In Assassin’s Creed Valhalla, Sigurd, the adopted brother of Eivor returns from Constantinople after exploring the east over several years. As you begin your journey in Valhalla, you soon unlock the ability to customize your ship’s appearance as well. By changing the figurehead and the mast, you deliver a message to those settlements your clan is about to raid. 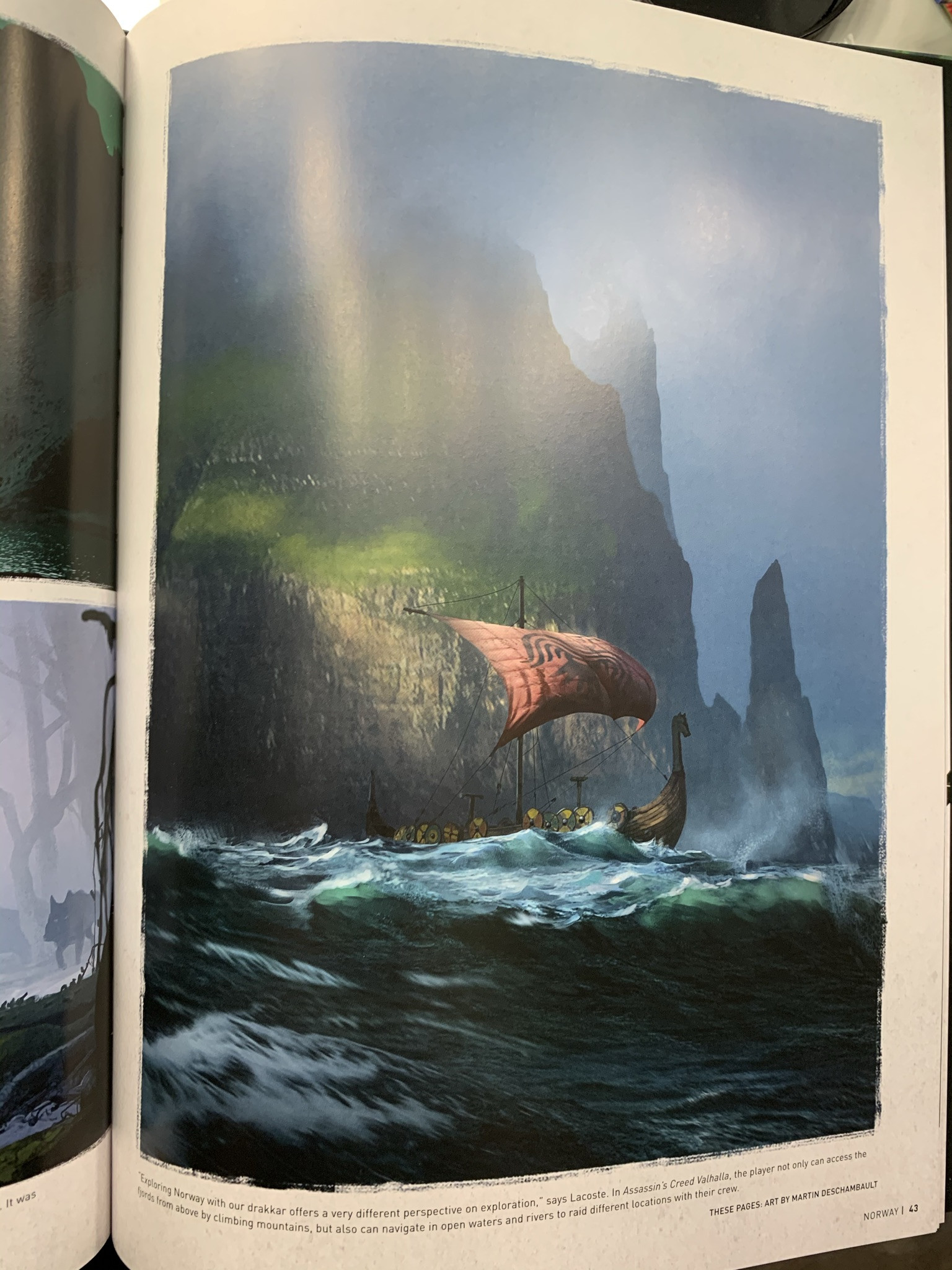 When the Raven clans finally arrive in England, they are quick to settle in the heart of a foreign land. In the case of Ravensthorpe, the team that focused on the historical aspects of the game realized that the real village was not far off from the fictional village. 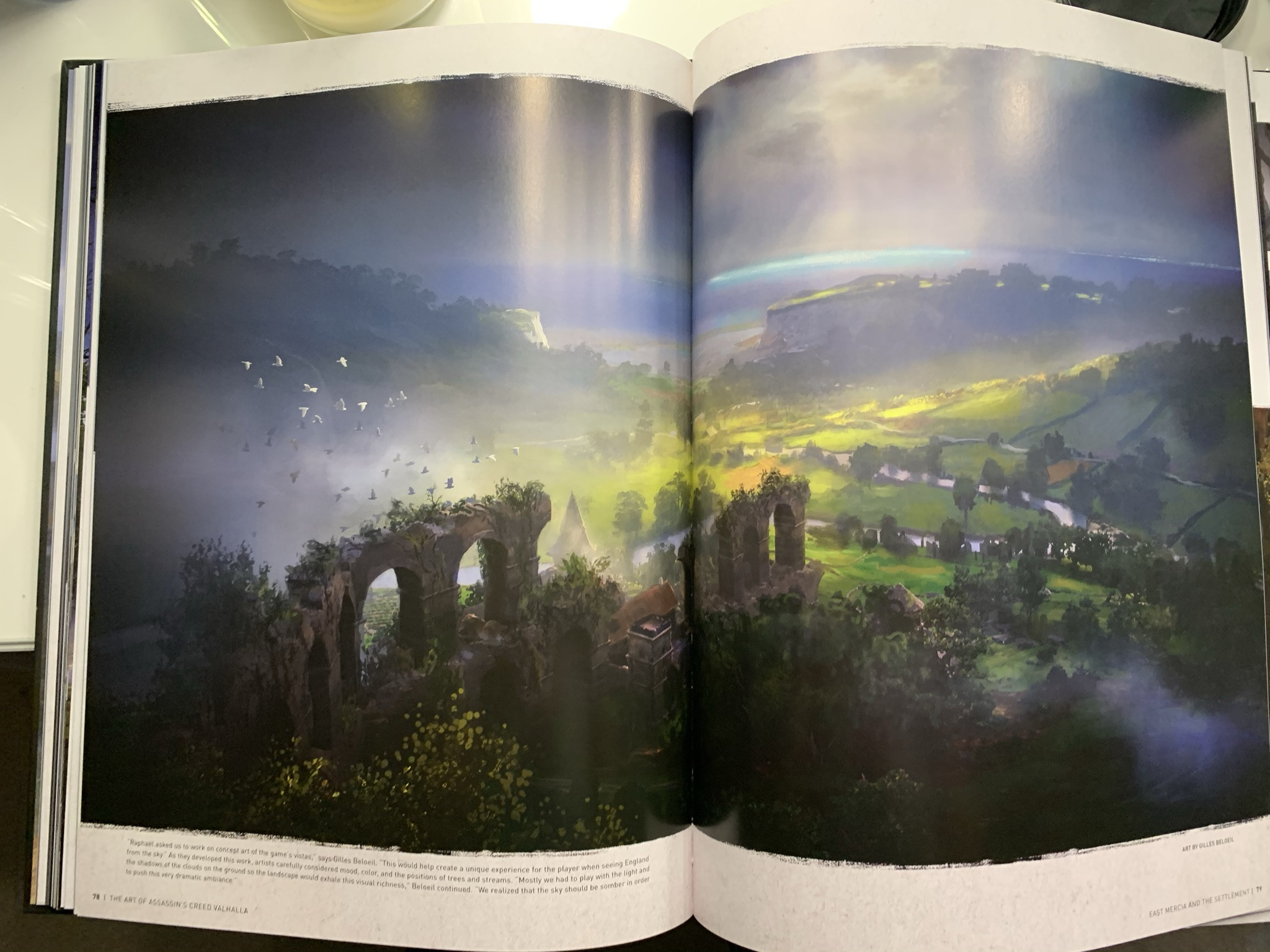 “The settlement is an important part of the game and a lot of work went into its design,” says senior concept artist Giles Beloeil. “Within the village, each house has a certain theme, and we needed them to be immediately recognizable to the player while maintaining their Viking identity with the rest of the settlement.”

Furthermore, the surrounding area of East Mercia is also distinctive at first glance with wild, and lush forests painting the landscape. Besides, the Roman structures of a culture long gone remain and their secrets are there for the player to discover, giving the region a unique feeling. 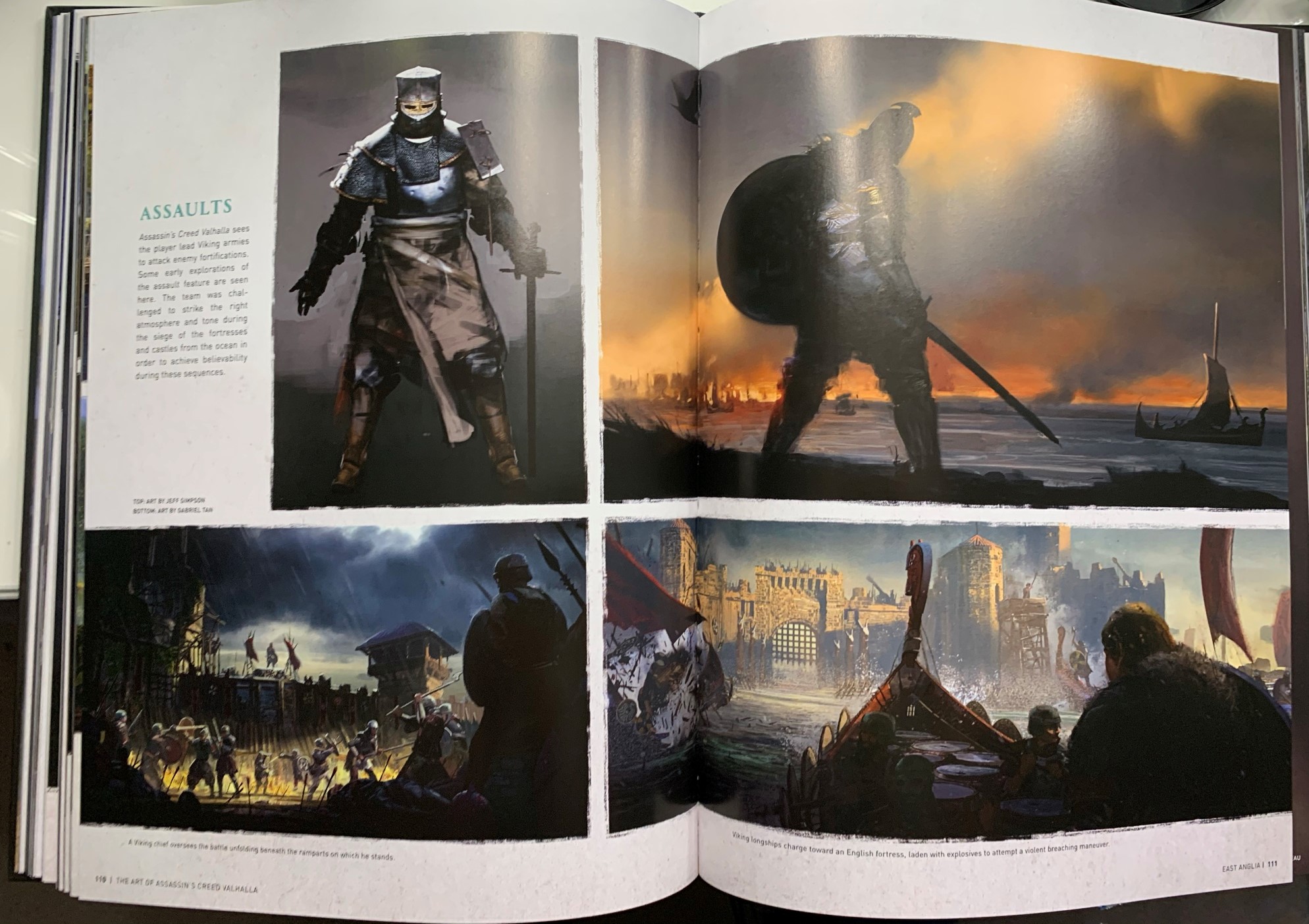 When the team begin to craft this luscious world, they used references to cities when the Romans occupied the land. A map of Lincoln during the Roman era served as a reference to the tea while recreating the Anglo-Saxon version.

Each region of England is unlike the other and the teams working on crafting each region paid particular attention to the territory. Also, with guidance from Raphael Lacoste, many of the artists were advised to focus on breathtaking vistas.

One of the biggest challenges the team faced was designing the Saxons. To distinguish them from the Vikings, they had to explore variations of their helmets, shields, and armour – the Vikings and Saxons were historically similar lookin. Retooling their outfits, helped the team “create a separate, distinct style while still having vibrant archetypes,” says Even Mehl Amunden. 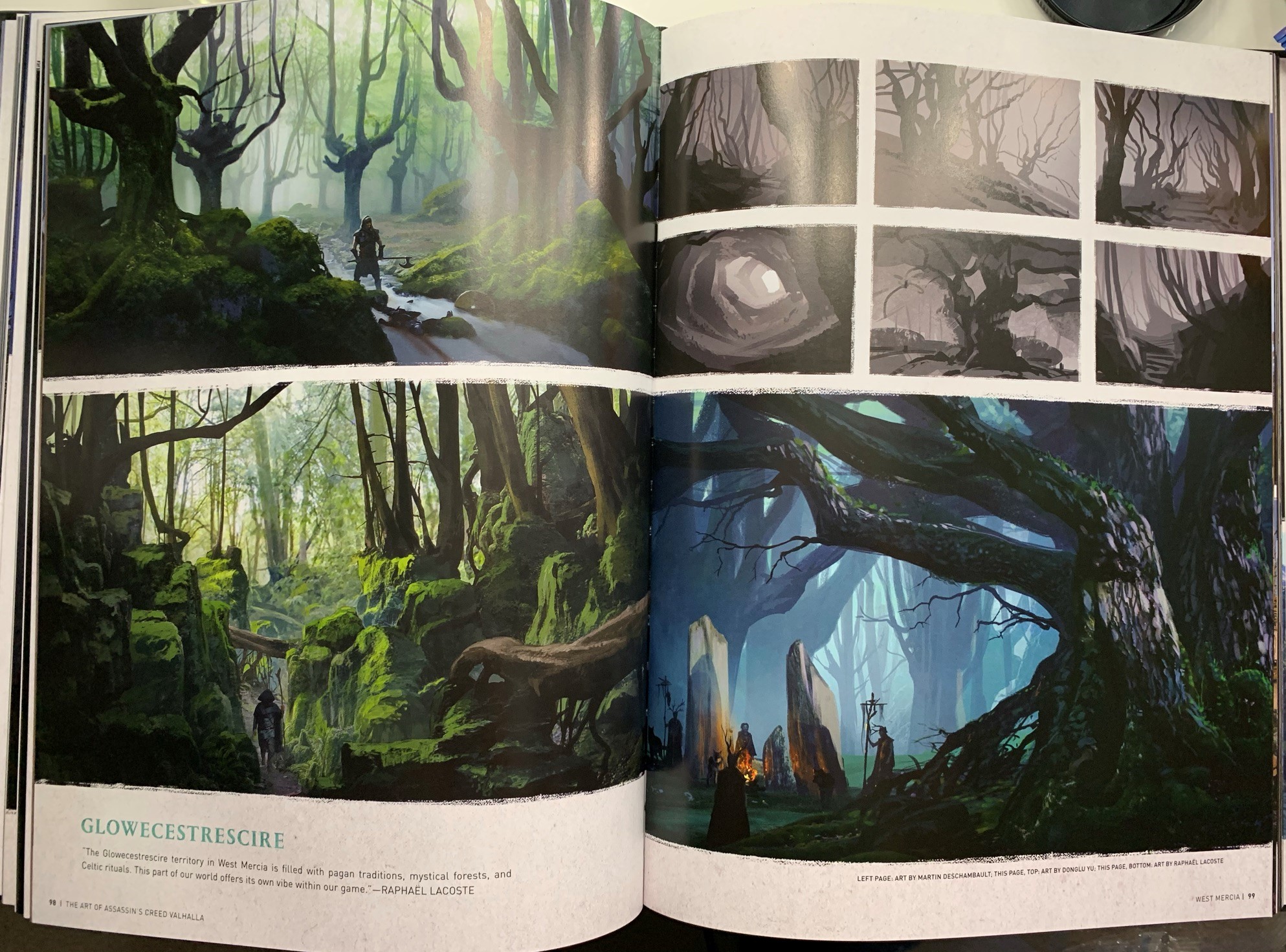 With each region having a distinct personality, The Art of Assassin’s Creed Valhalla offers insight into various regions. Glowecestrescire for example is steeped in pagan traditions, mystical forests, and Celtic rituals. This is the region where Eivor is introduced to the Samhain celebration and the burning of the wicker man. Even after being finished with the game, I’m left in awe of how off-putting some of the things the Pagans did to celebrate Samhain.

Continuing further into England, exploring the Wessex region showcases the wealth of the kingdom. Ruled by King Aelfred, this is the last Anglo-Saxon stronghold that is pushing back against the Viking invasion of England. “It is a territory where serene summer fields, mystical forests, and pretty villages contrast with the cruelty of the war,” says concert artist Eddie Bennun. 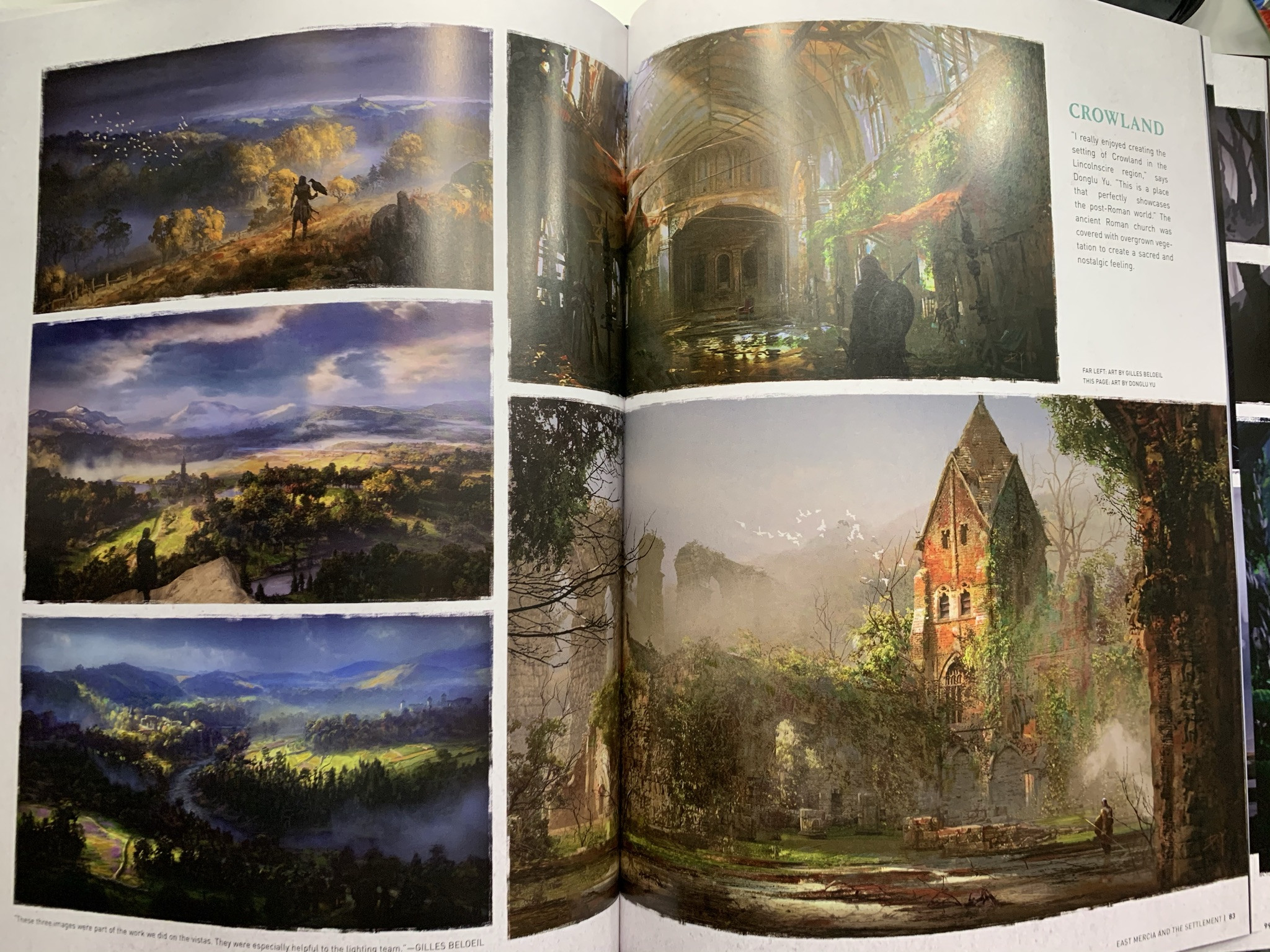 Wessex was known to celebrate the past and present cultures in a symbiotic way. An example is the Chichester Monastery, build on the ruins of an ancient Roman aqueduct. This place hides secret caves, sunken treasure and more.

The Art of Assassin’s Creed Valhalla is an excellent look at the art direction of one of Ubisoft’s biggest games to date. With nearly 200 pages of visual treats, each page, each concept, is a beautiful piece of work. Ubisoft knows how to create stunning environments and the teams working on these massive games are talented. Each page is filled with renditions of Vikings, their weapons, the beautiful churches, abbeys, and the artist’s insight used to develop these stunning pieces. If you want to continue your time as a Viking, consider purchasing a copy of this beautiful art book – it’s a colourful, high-quality art book packed with details.

You can purchase The Art of Assassin’s Creed Valhalla at Indigo or Amazon.