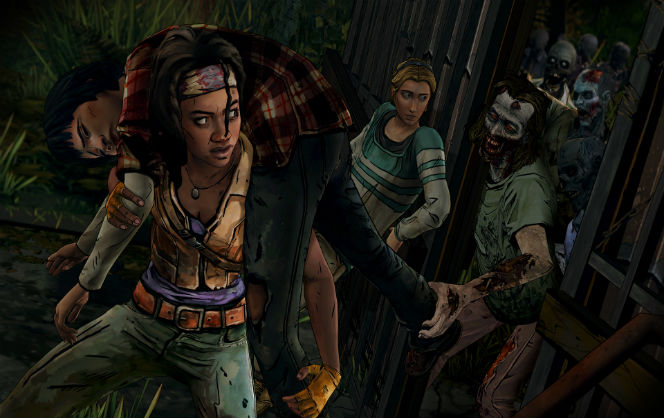 A new trailer for The Walking Dead: Michonne – A Telltale Miniseries Episode 2 ‘Give No Shelter’ has been released along with some new screenshots.

The second episode of the miniseries that stars the fan-favorite, katana-wielding character from the best-selling comic books will be released this upcoming Tuesday March 29th.

Explore more of Michonne’s past and how she copes with unfathomable loss and regret. The three episode miniseries serves to answer players’ questions about why Michonne left Rick, Carl and the rest of her group and more importantly, why she came.

Episode 2 see’s Michonne, Pete, and Sam post Monroe escape, and running for their lives. The leaders of the floating colony won’t soon forget or forgive and are out for blood. Michonne must deal with remembering her daughters, as the memories blur into everything else. Her world is becoming increasingly broken, forcing her to use all her skills to survive.

The Walking Dead: Michonne – A Telltale Miniseries Episode 2 ‘Give No Shelter’ comes out Tuesday March 29th 2016 for PlayStation 4, PlayStation 3, Xbox One, Xbox 360, iOS, and Android. The series will conclude with the third episode coming in April.

Check out the the trailer here: