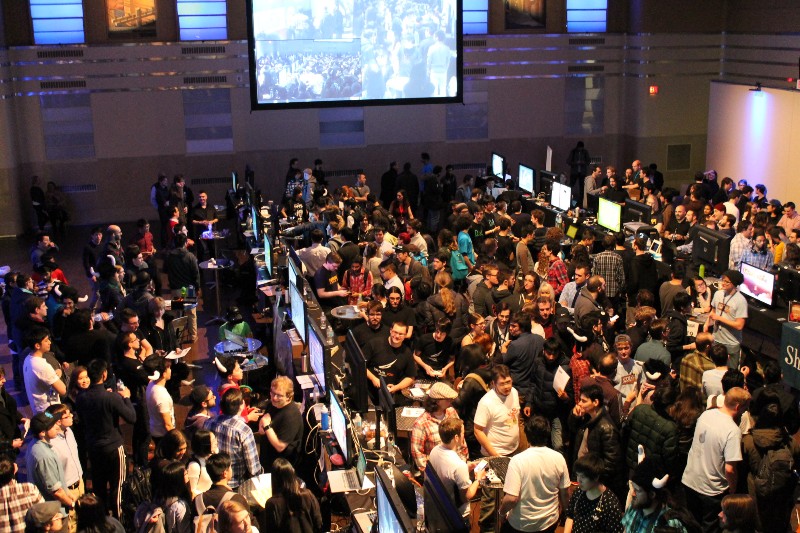 Often in an industry dominated by AAA titles and global studios, student created games get overlooked; but Level Up Student Showcase puts the next generation of game developers at the forefront.

Level Up held its 6th annual event yesterday in Toronto at the Design Exchange. Every year the event celebrates Ontario’s top post-secondary school talent. The showcase has already spawned success stories like 2014’s Runbow, which released on the Nintendo Wii U; and last year’s Pitfall Planet that is expected to release this year on Steam. Both titles won the showcase’s top prize and continue to celebrate huge successes. Having Runbow and Pitfall Planet’s success stories under Level Up’s belt, has this year’s students yearning for the top prize. For students it’s not only about fun and games, students look to Level Up as an opportunity to get scouted, or even get their games supported and published. With such high stakes the pressure towers over students.

“The days leading up to Level up is nerve racking because you’re always doing bug fixes, but once you’re up and running it gets better” says Emma Burkeitt, a developer of Pitfall Planet. Burkiett relives her team’s experience at last year’s Level Up, pointing out that her team worked hard long hours that paid off in the end.

She speaks about what Level Up meant to her and her team, “it gave us the support and drive to move forward with this project that we love.” Her advice for this year’s students was, “make something that you love because the love that you put into a project really shows.” This year Level Up had gaming’s top studios in attendance looking for passionate students that brought the best of the best. Scott Lee, World Director at Ubisoft Toronto, spoke about inspiring passion that students have showcased this year, through their work. “Students have put a lot of hard work into this and are taking it very seriously”, he said. “Some of this stuff I’d pay money for”.

Canada has the third largest video game industry in the world and it includes over 20,000 employees. Studio’s like Ubisoft are constantly looking to add talent to their team and use events like Level Up to recruit. Lee said, “Ubisoft is always on the hunt for talent and we know the talent’s going to come locally.” He added, “we get involved with the schools and help students gear up their talent to get work, hopefully with Ubisoft but other companies too.

Lee was also one of the judges for last night’s event, looking to crown one of the student teams as ‘Best in Show’. “I’m looking at it from a person that plays a lot of games. I ask am I going to love this and could I spend hours of my time on it?”  He pointed out, “although it’s initial appeal, the look sound and feeling must also be great.” In the end it was the Sheridan College team that won the top prize. Arrowheads is a fast paced local multiplayer archery game that was inspired by Towerfall and Smash Bros. The second year student team developed the game in 5 months, aside from their regular course load. Although the game was successful at the showcase, during development the project had many hardships.

Cody a developer of Arrowheads admits, “the team originally had another take on the game’s flow, but it didn’t play well and we had to rework our concept into something that gave a better experience.” The team learned from that hurdle and created a game that captured many people’s attention. When asked about the future of the game Cody said, “we wanted to aim as high as we could to put everything into and if it works well take to publishing”