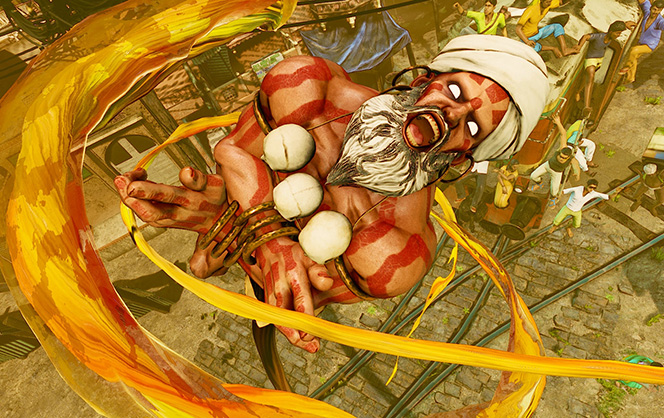 Paris Games Week gives us confirmation on when Street Fighter V will be available: February 16th!

Also Dhalsim is back! Older and greyer, the yoga master returns for another tournament.

There is a ton of new information released over on the PS Blog so head on over and read the rest.

The return of Dhalsim in Street Fighter V marks the addition of the first true zoning character to join the initial roster. Using his long-range limbs and slow projectiles to frustrate overly offensive opponents, Dhalsim’s style has historically been keep-away since his inception in Street Fighter II.

Although he’s a pacifist, Dhalsim steps into battle when it comes to saving others. From raising money for the poor to destroying dams that are forcefully keeping water from his village, Dhalsim takes up arms if the good outweighs the harm he can cause.

In Street Fighter V, Dhalsim once again joins the fray to help those in need. Not one to slack on his Yoga training, Dhalsim has mastered a few new Yoga skills for this upcoming battle, those being his V-Skill — Yoga Float and his V-Trigger — Yoga Burner.