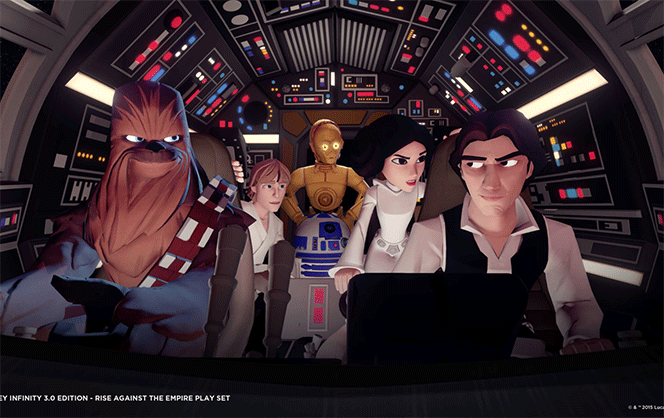 Today marks the release of the Rise Against the Empire toys for Disney Infinity 3.0. These figures help retell the story of the original trilogy of movies featuing a key moments of Episodes IV-VI. The stylized characters are some of the niftier designs I’ve seen for the franchise and really showcase creativity. Check our some images below and check out the trailer. Disney Interactive and Lucasfilm today launched Star Wars Rise Against the Empire for Disney Infinity 3.0 Edition, a new Play Set that takes place during the original Star Wars trilogy. Developed by Studio Gobo, in partnership with Avalanche Software, the Play Set takes players through the iconic moments and adventures from Episodes IV-VI, including the characters, vehicles and locations.

In the Star Wars Rise Against the Empire Play Set, players will embark on galaxy-spanning missions with legendary Jedi Luke Skywalker, Rebel leader Princess Leia Organa, heroic smuggler Han Solo and his trusty co-pilot Chewbacca to help defeat Darth Vader and overthrow the evil Galactic Empire. With non-stop action, players can explore open world planets like Tatooine on foot or on a Bantha, take down AT-AT walkers on snowspeeders on Hoth, out-maneuver stormtroopers on speeder bikes on Endor, and partake in epic space battles in an X-wing in attempt to destroy the Death Star.