A Star Wars: Battlefront III Copy Has Made Its Way Online

A redditor by the name of MissFeepit shared on the platform what appears to be a fascinating discovery.

A Reddit user has shared what appears to be a test version of the game Star Wars: Battlefront III which was dedicated to the PlayStation Portable before the cancellation by LucasArts.

Lucasarts was a client of a relative of my fiancé. During the day, he was able to play test versions of many games, one of which was Star Wars: Battlefront III. Once it was cancelled, and all assets were gathered up to the Skywalker Ranch in Sentez, one of the game test cartridges for the PSP version was left behind. Being young, he didn’t think much about it and took it home and tested it. Combat AI, CTF and Conquest worked well. – MissFeepit

Years later, while reviewing his old games, he found the cartridge, and as far as we know, this appears to be the one and only copy of the cancelled Star Wars game.

I am, like the Redditor, very curious to know what this little gem could be worth, knowing that it still works very well, has no scratches, no physical damage or even to the game itself. 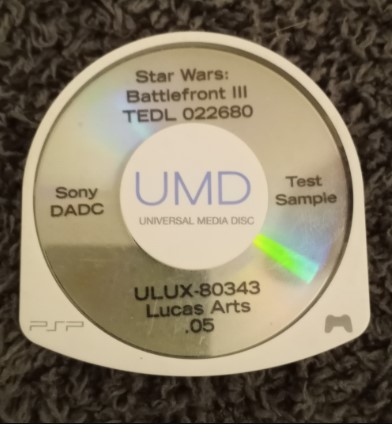