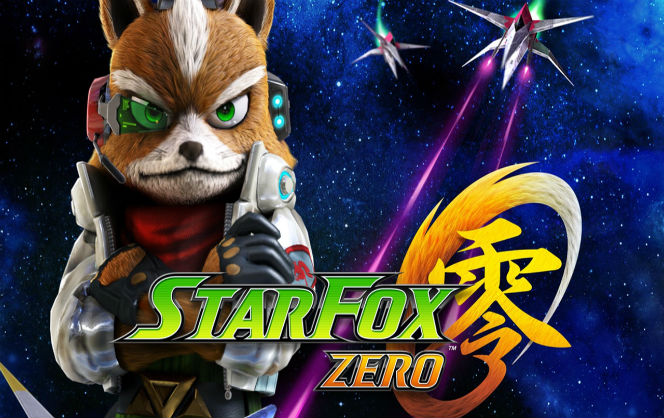 ALERT! ALERT! This is not a drill! The galaxy as we know it is in jeopardy! The evil Andross has taken over the Lylat System and only you and the Star Fox crew can stop them! The Star Fox Zero game is now available exclusively for Wii U consoles, so pin on your pilot wings and dry clean your flight suit – it’s time to report for duty in this action-packed interplanetary adventure.

The Star Fox franchise is finally making its debut on WiiU with Star Fox Zero. Fox McCloud returns with his memorable team composed of Falco Lombardi, Peppy Hare, and Slippy Toad. Pilot a vast array of transforming vehicles using a unique control scheme. Star Fox Zero is the first game in the series implement independent controls for flying and aiming. Using the TV to select a target and the gamepad’s motion controls to aim and shoot makes you feel like you’re really in the pilots seat, especially while utilizing the game’s ‘3D Voice’ feature to hear you’re squad-mates’ audio from the gamepad!

The levels in Star Fox Zero aren’t just about going from point A to point B. Many of the game’s gorgeous levels offer high replay-ability due to various collectibles and secrets. Putting your piloting skill to the test, you can destroy as many enemy ships as possible to try to get the highest score. You can even have a friend sync up a separate WiiU Pro controller or Wii Remote and Nunchuk and assist by flying the Awing while you use the gamepads motion controls to aim and shoot.

Players who also own the Fox and/or Falco amiibos are in for a surprise. Tapping the Fox amiibo replaces the Awing with a low-polygonal retro Awing from the Super Nintendo days, while tapping the Falco amiibo unlocks a special Black Awing.

Star Fox Zero is available now for WiiU for $74.99 for physical copies (comes with Star Fox Guard, a full fledged Star Fox experience on its own!) Digital copies are available for both Star Fox Zero and Star Fox Guard on the Nintendo eShop for $64.99 and $19.99 respectively. If you purchase both games digitally you will receive an automatic discount of $9.99 upon purchase of the second game.