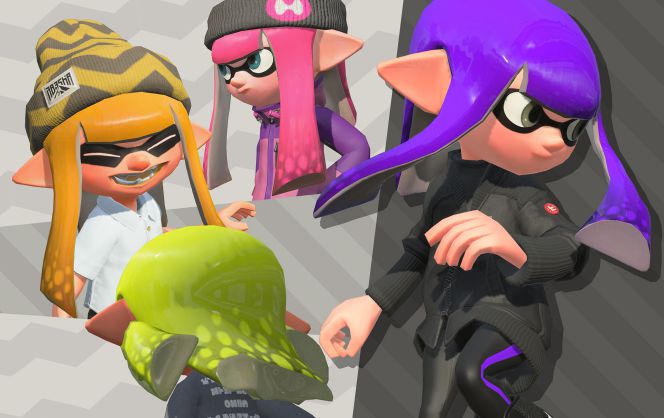 The content will be free. There will be four new battle stages but they will not be all available at launch and will instead, roll out over the following weeks. The first level, MakoMart, will be available on Friday, November 24, with Shellendorf Institute, Walleye Warehouse and Arowana Mall “coming soon.” MakoMart is a massive WalMart inspired level, while Shellendorf is a new stage and Walleye Warehouse and Arowana Mall return from the original Splatoon.

A new Salmon Run is coming and a new stage is being added to the rotation! After downloading the update, Salmonid Smokeyard will be available, and the level features a “wide gap on the beach divides two upper platforms, with fan lifts being the quickest way to traverse the two platforms. Teamwork is required to use the fan lifts effectively.”

New gear, including 140 pieces of unique equipment is being added, including shoes, headgear, and clothes.

New hairstyles to customize your Inkling, two for females and two for males.

Higher Level Caps – as of right now, players cap at Level 50, after the update, the maximum cap will be Level 99. After hitting the new level cap, speaking to Judd allows players to Prestige and continue ranking up.

Lastly for this month, gear swapping, instead of having to leave a lobby to swap gear, you can do it without leaving the room.

Clam Blitz: In Clam Blitz, competing Inklings are tasked with collecting clams scattered around the stage. After one is picked up, the clam follows the player. The objective is to throw the clam into the basket near the opponent’s base. The first team to score 100 points wins! But, of course, this being the fiercely competitive world of Splatoon 2, things are not as easy as they seem. The baskets are protected by a barrier, which much be destroyed first. After collecting 10 clams, the player will earn a Power Clam. These super-powered clams are the key to breaking the barrier, so strategy will definitely be involved in which clams are used to destroy the barrier and which are used to earn points. Not to mention the extra-satisfying opportunity to steal opponents’ clams by splatting them…