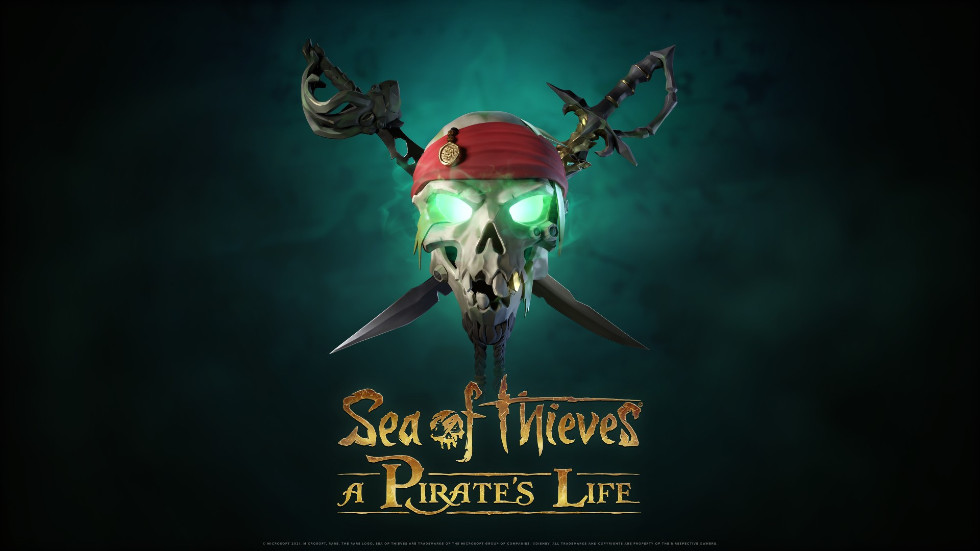 Rare Introduces Pirates of the Caribbean into Sea of Thieves: A Pirate’s Life

Xbox and Rare Studios invited us to check out the upcoming Sea of Thieves: A Pirate’s Life expansion, a new crossover featuring Sea of Thieves and Disney’s Pirates of the Caribbean. If you were watching the Xbox and Bethesda Showcase last week, the big reveal went off for Rare studios without a hitch, something that Executive Producer Joe Neate was worried would leak beforehand.

Luckily that wasn’t the case and the reveal took many of us by surprise, I know I was stunned and equally as excited to see how the two worlds could work in tandem but after hearing how much love and care went into this deal between Microsoft and Disney, everything about the two franchises coming together makes sense.

So, how did it all begin? According to Creative Director Mike Chapman, Pirates of the Caribbean was one of the properties that inspired Sea of Thieves. Not long after E3 2019, Rare approached Disney with the idea of crossing the two properties over. Vice president of Disney and Pixar Games Luigi Priore met with the two and was immediately on board with the idea. It also helps that Chapman was a huge fan of the film series, so he tapped into his knowledge to push the idea.

Speaking to Variety, both Neate and Chapman walked out of the meeting with Disney with a wealth of confidence. And the rest, as they say, is history.

A Pirate’s Life for Me

Mike Chapman kicked off our time together by saying the experience of working with Disney is surreal and after having worked for so long in secret on this project, how great it is to have it out in the open. “Everyone has a connection to Disney,” says Chapman. “Whether is through a movie you loved growing up or a movie you rediscovered through your family.”

“Disney elicits an emotional response from people and sticks with you.” And the same ideology was brought when working on this latest expansion. The team at Rare wanted to bring the two together in a meaningful way. To do that, the team had to understand a Pirate’s Life is within the Sea of Thieves world and what it means to be a pirate within the Sea of Thieves World.

For this to work, that tenant had to be interwoven into the fabric of the world. Rare didn’t’ want to just create a series of sidequests and move on, they wanted to integrate the worlds. Sea of Thieves is a fantastical world full of supernatural elements, full of adventures and nautical legends brought to life.

Part of the lore of Sea of Thieves is that it is the world beyond the horizon. If you had a map, you could go chart a route through the Devil’s Shroud, untouched by time and where pirates live forever. This hidden world is shrouded by sight and governed by The Ferryman, who ferries you back to the land of the living.

The idea that no one ever really dies in Sea of Thieves because they always come back to tell their story and have more adventure. In our game, A Pirate’s Life is eternal because of the role of the Ferryman. We saw this parallel in the role of Davy Jones, who governs the lives of pirates in the films. He rescues the souls of pirates lost at sea, and it can be connected. 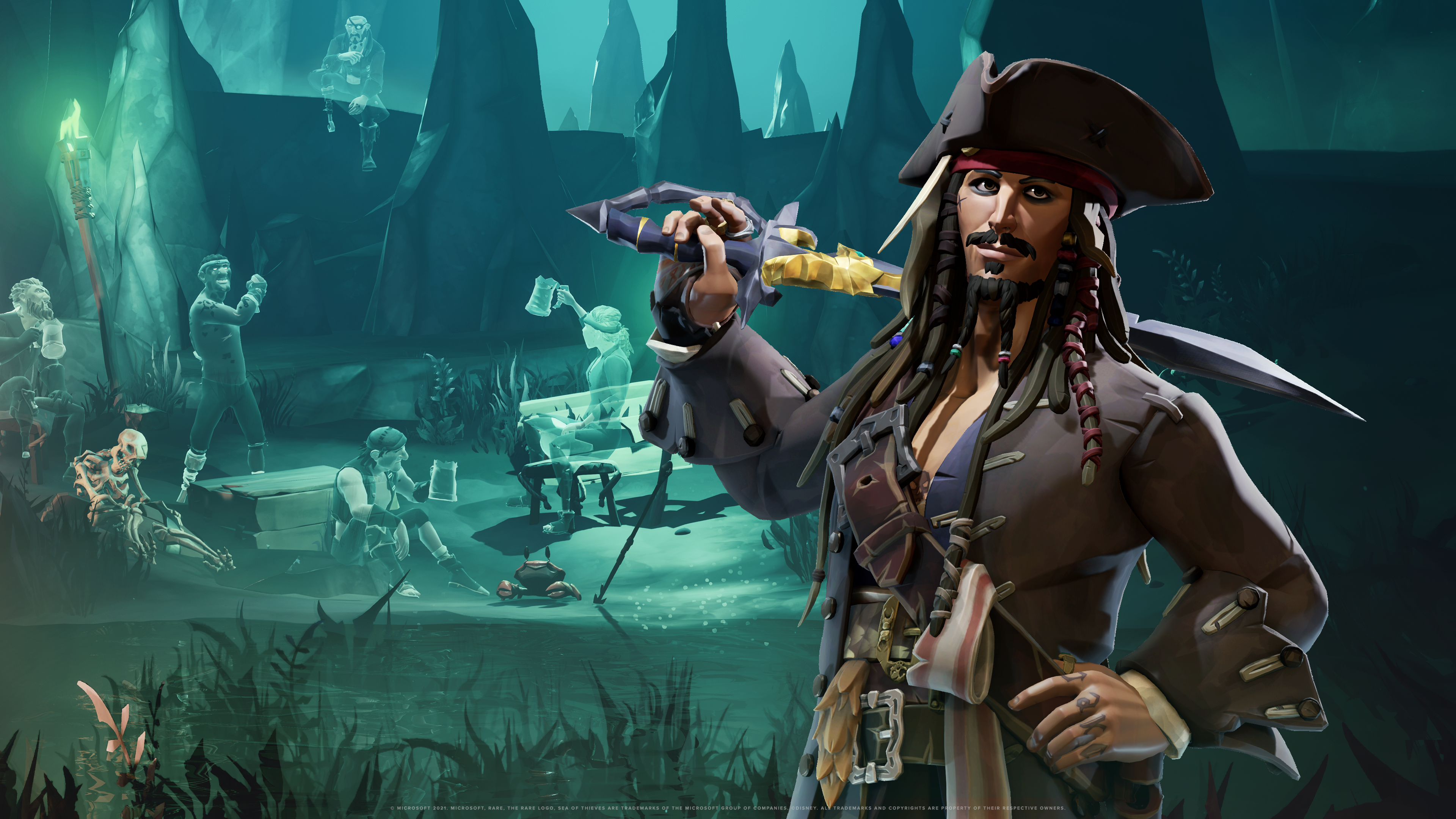 Bring me that Horizon

When Sea of Thieves: A Pirate’s Life launches, five new Tall Tales will allow you the opportunity to crew up with Captain Jack Sparrow. Together, you’ll go on an adventure to save the Pirate’s Life in Sea of Thieves. It begins with Jack stealing one of the greatest pirate treasures of all time: a golden key to other lands. This golden key is how Jack crosses the horizon, bringing him into the world of Sea of Thieves and is also how Davy Jones crosses over. 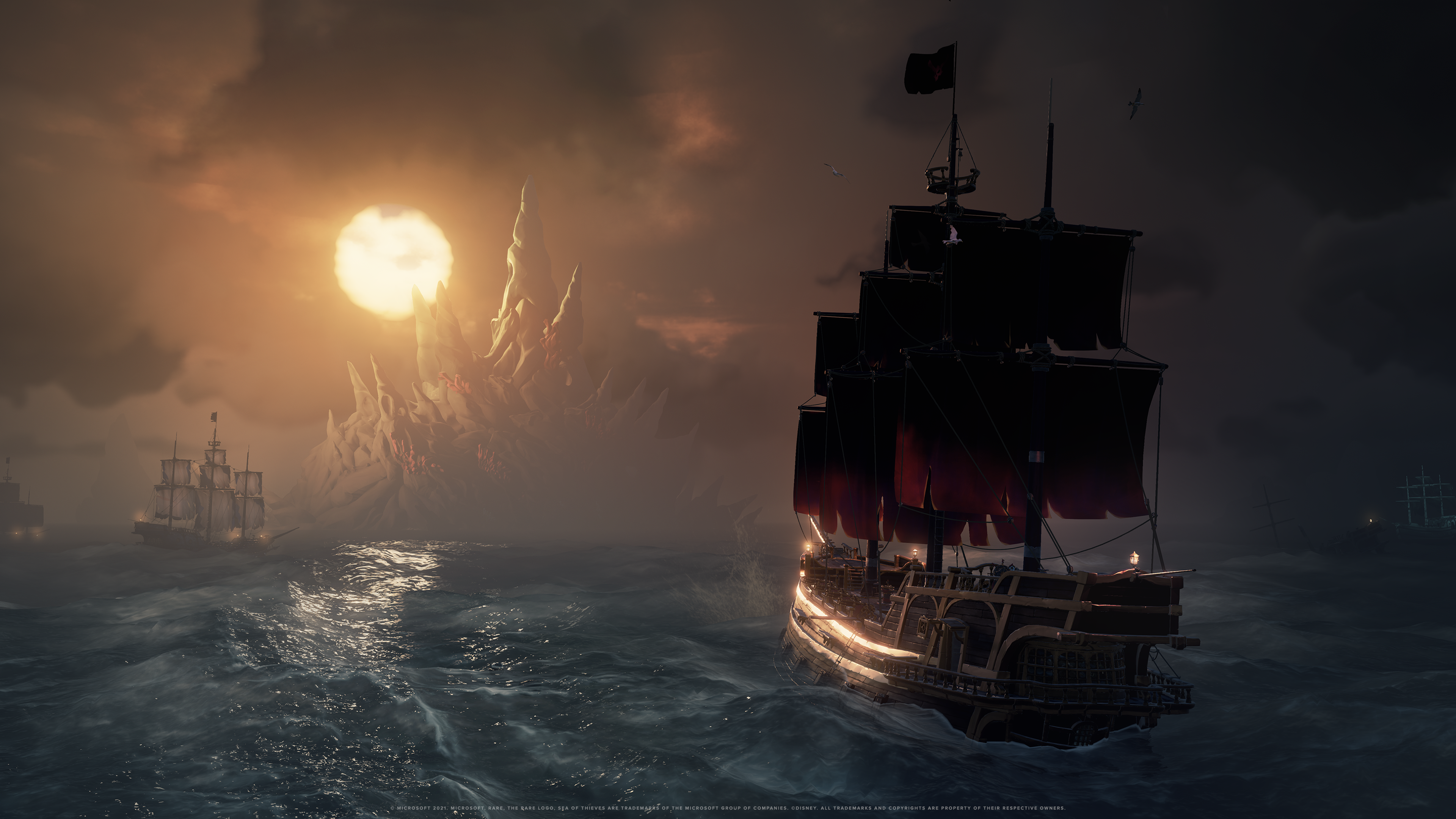 You’ll work with Captain Jack and prevent Davy Jones from taking control of A Pirate’s Life. Players will visit brand new locations, exploring the supernatural Sea of the Damned and the world of the Sunken Kingdom.

These worlds lead you to encounter new creatures like Sirens, Phantom Pirates who have been abandoned in the Sea of the Damned, Ocean Crawlers who work together as a crew. You’ll also take advantage of new mechanics like the Trident of Dark Tides where you can wield it in the Tall Tales but also use it to engage with existing content like the Skeleton Forts or other ships.

Each Tall Tale brings rewards and themed Pirates of the Caribbean content, allowing you the chance to dress up as your favourite characters from the film, accessible from the Pirate Emporium. You can deck out your ship to make it feel like something straight from the movies.

The team from Rare visited the Pirates of the Caribbean ride at Disneyland for inspiration. You’ll see familiar locations from both the attraction and the films in the expansion. Partly this is due to the audio, Rare was granted access to original audio files and used them in-game.

Rare has done their homework on what it means to be a pirate and the studio believes they’ve nailed it. “Nothing can undersell how cool this update will be,” says Joe Neate. 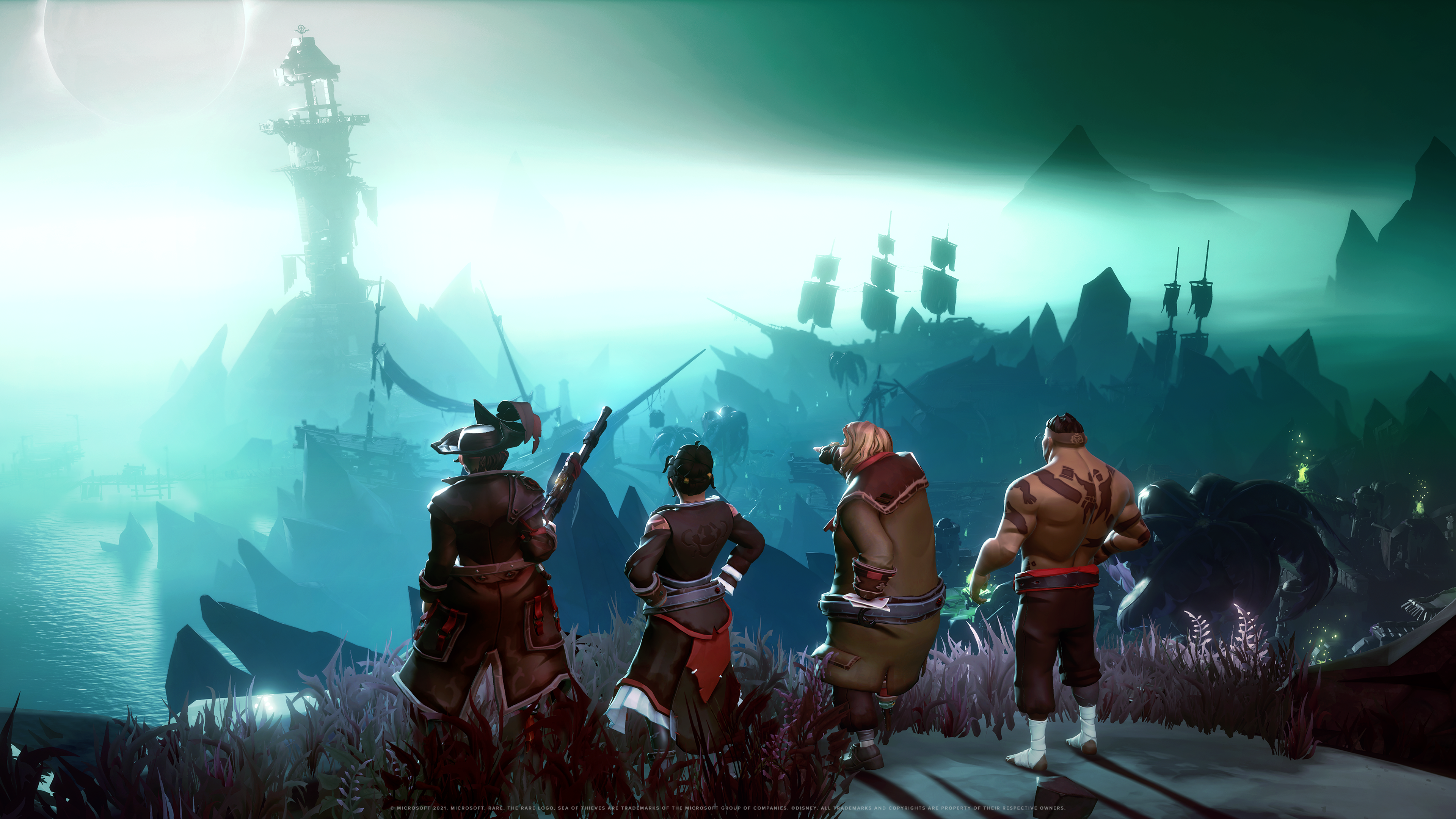 And that’s exactly what they’ve done. By finding the right balance between offering an engaging challenge to returning players, but also introducing new players to the world of Sea of Thieves. While Sea of Thieves is a social game, some players prefer to go out into the deep blue sea alone. With the inclusion of Captain Jack Sparrow, he’ll be right there with you.

To make this as authentic as possible one of the stunt doubles for Johnny Depp came to the studio dressed as Captain Jack Sparrow. He joined the team and acted our scenes from the game to help nail the tone, the mannerisms and how he carries himself Getting Jack Sparrow right was one of the most critical parts of developing this expansion.

The team created new tools to give you a new, cinematic experience. You get contrasting colours, exciting points all over the map, a lot of the decisions to use assets as leading lines, help the player find new things to do.

And if you get lost, the quest log will be your best friend. It will always guide you and always hint at what to do next. In total, there are five quest books and you can revisit each Tall Tale through the quest books.

The first Tale in A Pirate’s Life thrusts you straight into the thick of things. You begin adventuring into the Sea of the Damned, where dreams and nightmares take on physical reality. It is similar to Davy Jones’ locker and is equally as creepy seeing it in Sea of Thieves. 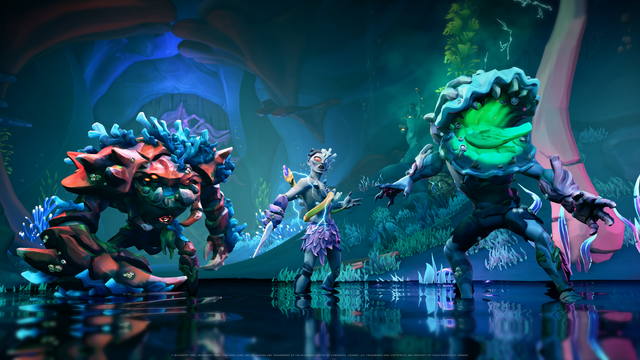 Adventuring in the realm, you’ll shipwrecks, haunted grottos and the haunted town of Sailor’s Grave. Your goal is to find Captain Jack Sparrow. You begin by meeting the new character, the Castaway, who is a mysterious figure who will bridge the two realms. This realm features several sound bites from the Disneyland attraction here, and explore the caves, hearing remnants of the past.

Once you emerge in the Sailor’s Grave, this fully-realized location has tons to do, including a gambling den, a tavern, and lots of lore to uncover. There are even secrets for you to uncover and solve, so players can take some time and explore the location. There’s even an easter egg hidden for players to find that will put a smile on their faces.

Your main goal is to reignite this massive stone lighthouse. By doing this, you summon the Ferry of the Damned and as part of this journey, you’ll inevitably find Captain Jack Sparrow. 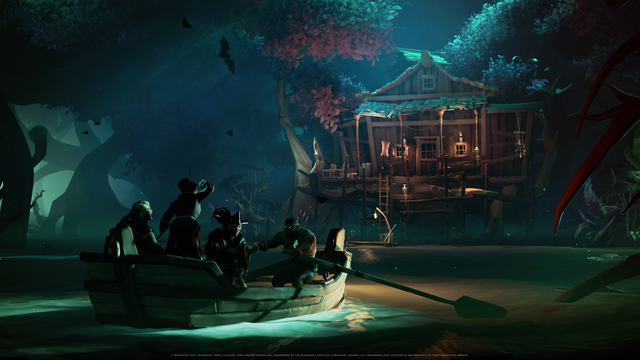 And Jack isn’t the only cursed pirate you’ll meet in Sailor’s Grave. Rare has a new cursed captain, a talking skeletal head who offers hints, talks to you, and also helps you on your quest to reach Jack. He will sing shanties with you, comment on your actions.

Players will dive into the Sunken Kingdom and look for Jack’s infamous compass. This unusual instrument is stuck on the Black Pearl and it is up to you to recover it to save the Sea of Thieves. Players will dive into the hold of the Sirens, and the citadel of the Sirens. Players will venture into these structures and discover Siren statues, each one harnessing the Siren’s song. These are used to change the environment to complete puzzles and push the narrative forward. 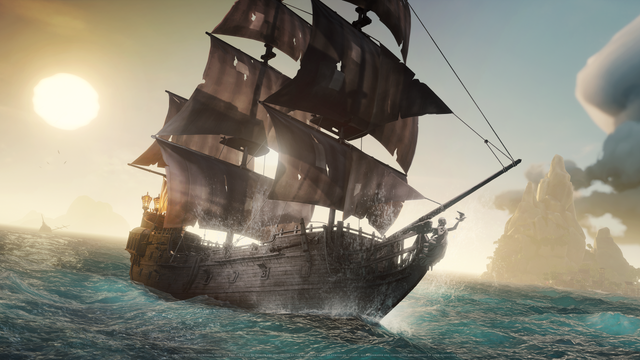 To keep players on track, the developers smartly laid out debris on the seafloor to give players a path to follow. This eventually leads to seeing the infamous Black Pearl chained and locked away at the bottom of the sea. Seeing the ship chained and ready to be dragged away is surreal for fans of the film.

Sirens are intimidating, beautiful creatures and you’ll see how scary they are when the game launches. By using the power of song, Sirens will challenge you but will smartly move away from you when you’re on the offence. Not only that, but the gem in each Siren’s chest helps them heal from any incoming damage. In short, you will need to be wary of these creatures. 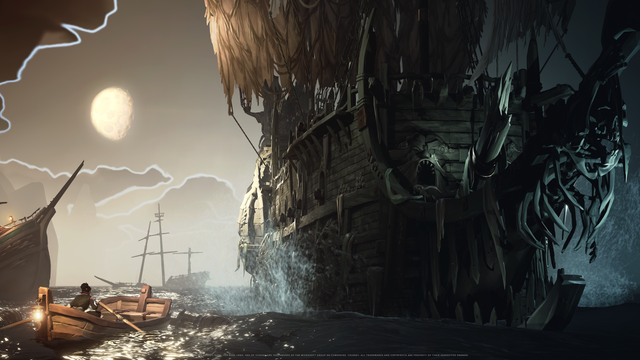 That’s not all though, several new enemy types will make your life harder than necessary. The Ocean Crawlers will devastate you if you let them, one is a brutish monster who pummels anything in front of you, another will shield any allies and also shoot electricity at you, and the last Ocean Crawler, the Hermit will poison you with spores in the air.

Who is voicing Jack Sparrow?

This is one of the most asked things the team has been asked since revealing A Pirate’s Life. His name is Jared Butler and he is the same guy who voiced Captain Jack Sparrow in Kingdom Hearts III. Rare worked with the Disney character voices team to fine-tune the script and work together to find the talent.

Why not use the Pirates of the Caribbean branding?

It is a Sea of Thieves update ultimately, that tells the story of Pirates of the Caribbean coming to Sea of Thieves world. This expansion is meant to represent both worlds. The subtitle, A Pirate’s Life is meant to be compared and what it means in each world.

The team at Rare seems very excited about the collaboration with Disney – is there a possibility for future inclusion of other Pirate-themed Disney properties, such as Peter Pan, Treasure Planet?

It needs to be the right story; it needs to be an authentic cross-over. To do that, you need to treat it with care and it needs to weave the world together. It is critical to us and it can always be done, but the story comes first.

When does this take place in the story of Pirates of the Caribbean?

To us, the events of A Pirate’s Life take place after the fifth movie.

Are you planning to use other characters from the Pirates of the Caribbean saga, such as Captain Barbosa, William Turner or Elizabeth Swan?

You will see other characters from Pirates of the Caribbean show up. Without diving into spoilers, Captain Barbosa is in the attraction at Disney, so you will see him show up and some crew of the Black Pearl.