Sony Interactive Entertainment will officially refund all players who purchased Cyberpunk 2077 digitally on the PlayStation Store on PlayStation 4 (or via backward compatibility on PlayStation 5). This decision comes after developer CD Projekt RED apologized for the state of their game. 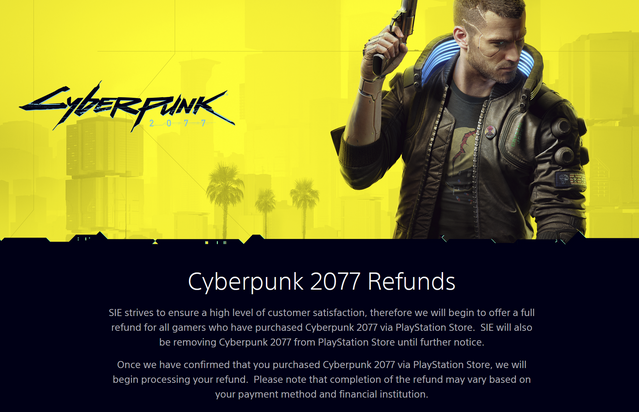 A new page has appeared and confirmed that until further notice, the game will be taken offline from the storefront and full refunds will be offered. The page’s messaging is simple and after the confusion from earlier this week, that began with CD Projekt RED announcing refunds would be made available to anyone who asked, and that you would need to reach out to the platform you purchased on to do so. Microsoft’s refund policy is a bit more lenient, but Sony eventually began turning away customers citing they would need to wait for the game to be patched.

For those on PlayStation 4 and Xbox One, the game is riddled with bugs, major pop-in, frame rates in the teens, and playing on Xbox Series X or PlayStation 5 isn’t much better. Performance may be improved but frequent crashes have left many soured on continuing the game and the recent patches haven’t done enough to make the game enjoyable.

Before launching on December 10, a handful of outlets were provided with a PC review code with an NDA asking each outlet to use approved, pre-recorded footage for coverage. Those requesting Xbox or PlayStation copies were rejected by the PR company, and only being offered the opportunity to re-apply for the chance to cover Cyberpunk 2077. I wholly recommend not touching the game on Xbox One or PlayStation, but if you can’t wait to play the game, it is available on Stadia and plays much better than consoles currently do.