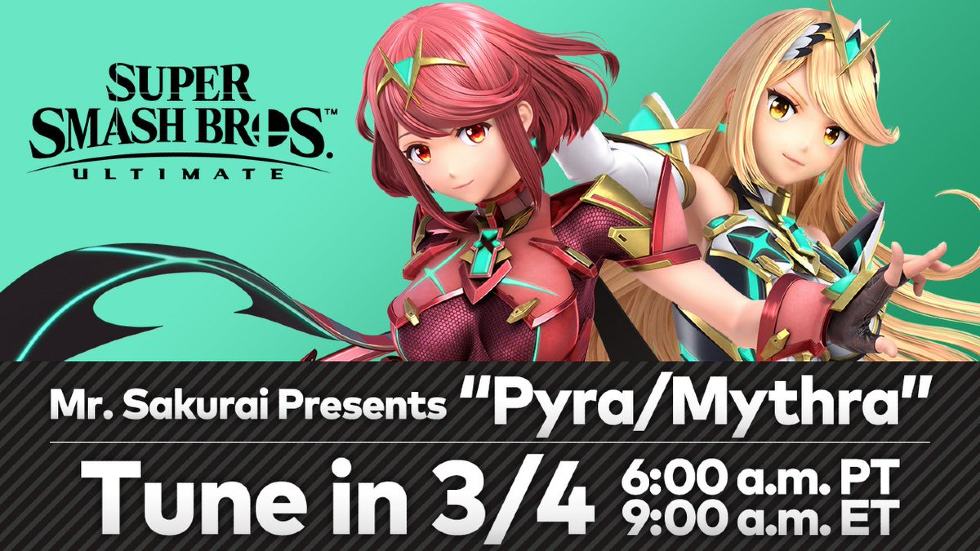 Nintendo has announced on March 4, it will be holding a 35-minute live stream for its upcoming Super Smash Bros. Ultimate’s upcoming DLC fighter, Pyra/Mythra.

The presentation will be hosted by the fighting game’s director, Masahiro Sakurai and will offer an in-depth look into dual characters. Nintendo has confirmed that the stream won’t feature any new fighter announcements but will feature a specific release date for the Xenoblade Chronicles 2 duo.

Tune-in on 3/4 at 6am PT for an in-depth look at the new Super #SmashBrosUltimate DLC fighter, Pyra/Mythra, with Director Masahiro Sakurai. He will also reveal the fighter’s release date! pic.twitter.com/eSjrrgGqAk

Pyra/Mythra’s character announcement was revealed during the beginning of last week’s Nintendo Direct, the first Nintendo Direct in about 530 days. The fourth character in Super Smash Bros. Ultimate‘s second fighter pass was initially announced for March.

During a Famitsu column last summer, Sakurai said that following the completion of the second fighter pass that “continuous Smash development from Smash for 3DS/Wii U will finally come to an end.”

He feels if the series were to continue in a new game that there would be “no way” that the game would represent as many fighters as there are in the series’ Ultimate entry.