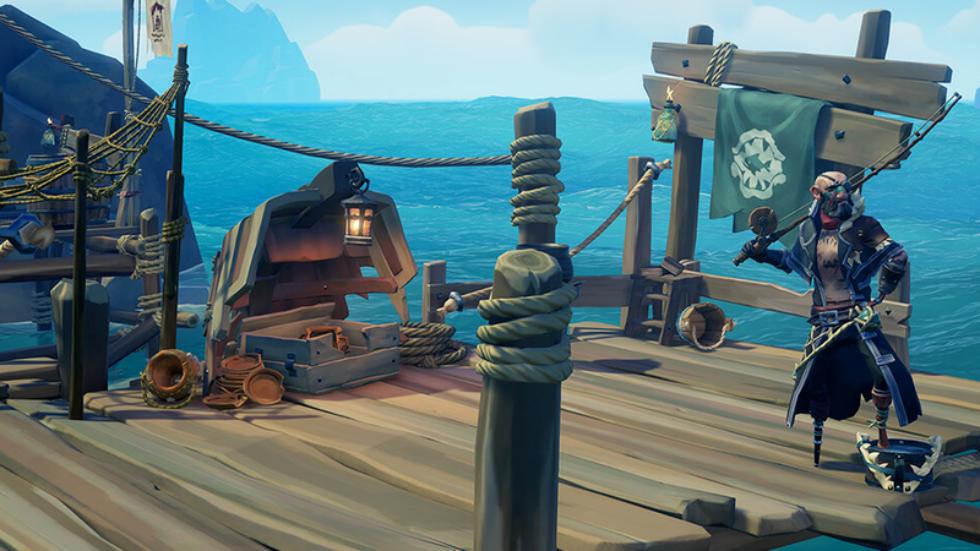 Sea of Thieves April Update Is Called Ships Of Fortune

During today’s Inside Xbox presentation, Rare was on hand to introduce this month’s new update that’s coming in a few weeks. Joe Neate, an Executive Producer at Rare introduced us to Ships of Fortune.

This month’s update is called Ships of Fortune, and we all prefer a certain Trading Company within the game. The original Gold Hoarders, Merchant Alliance, Order of Souls and Athena’s Fortune each appeal to different players and now you can become an Emissary for them.Taking on this special duty allows pirates to earn boosted rewards from their usual Voyages, plus special cosmetic rewards for those who perform best!

To become an Emissary for an Outpost, you’ll need to talk to representatives at the Outposts and inspect the nearby table. Emissary roles are highly prized, so you’ll need to make a significant donation to prove you appreciate the privilege!

Then, you’ll hoist the Emissary Flag and advance through five grades by exemplifying your Company, by finding and unearthing chests as a Gold Hoarder. The higher your Grade, the bigger the multiplier you’ll get when cashing in your haul! Beware, as other pirates will know that an Emissary’s ship is likely to be laden with loot.

Also, adorn your character in the colours of your Company, serving as a true ambassador to earn rewards while competing in the Emissary Ledger.

A new and mysterious Company known as The Reaper’s Bones has emerged and in order to join them, you’ll need to attack others and take their Emissary Flags as a trophy. The new Company can be found at The Reaper’s Hideout, where they seem to encourage their ideals of ‘true piracy’ without the need for honour among thieves.

Arena Mode also got an overhaul with old treasure maps replaced by a single chest marked by a Sea Dog Beacon, with just one cash-in location to ensure a furious battle for victory! Contest times have also been slashed to 15 minutes, guaranteeing a frantic pace in each match. Players can also briefly revive fallen crewmates before their soul drifts to the Ferry of the Damned.

Lastly, the Pirate Emporium will now have three breeds of feline friend for your pirate: the scruffy Wildcat, fluffy Ragamuffin and slinky Mau. Each breed comes in a variety of colour options, so you can hand-pick the kitty that best suits your pirate and ship.