There are many gaps in my knowledge of video game history; until Terry Bogard was announced as a DLC fighter for Super Smash Bros Ultimate, I had never heard of the NeoGeo, and only knew of SNK in passing, having never actually played any of their games. But now, with the release of Samurai Shodown NeoGeo Collection on the Nintendo Switch, some of those gaps have finally been filled in.

Samurai Shodown NeoGeo Collection contains seven games in the classic weapon-based fighter franchise, including Samurai Shodown V Perfect, a version of the fifth game that until now, has never before been released. Every game contains the option to play through their original arcade modes and versus mode, which for the first time can be played online in ranked leaderboards.

Alongside this, the collection contains a robust museum, featuring developer interviews, design documents, an in-depth history of the franchise, a music-player with over 200 tracks, and even examples of high-level tournament play with detailed explanations of the matches. That’s a lot in one package, but does it deliver on everything it promises?

The museum is where Samurai Shodown NeoGeo Collection finds the most success. It is here where you can see the amount of love and dedication that has been put into this franchise over the years, and it is fascinating to learn about the development history of each of the games in the collection.

Pages and pages of design documents are present here, offering looks at unused character designs, early development sketches, character movesets and so much more. The notes are of course in Japanese, so I can’t read them, but it’s still pretty cool that I’m able to compare the sketches to actual gameplay.

A few of the developers behind the series got together to discuss what it was like working on Samurai Shodown 20-30 years ago and share some insights into how they found their success. One of the interviews gives us a look at an abandoned concept for a Samurai Shodown game that featured mechanized versions of the characters. Everybody present for the interview is laughing about it and the game director himself calls it a stupid idea. But the fact that they kept those designs and are willing to show them off all these years later is frankly amazing. This look behind the curtain will interest anyone with a passion for Samurai Shodown, or even a passion for game design as a whole. 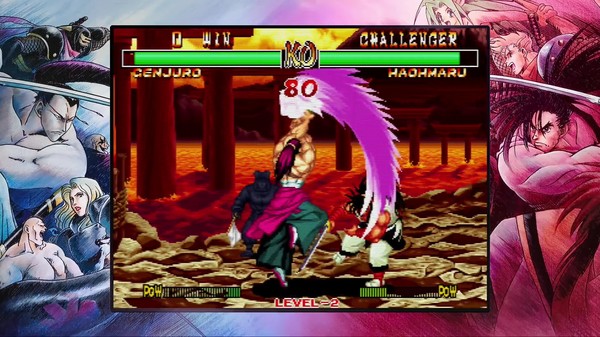 The pro matches are a much-appreciated addition as well. While I lack the skills to come even close to emulating their high-level of play, it was still helpful to watch and pick up some tips for improving my game.

If I had one complaint about the museum, it would be that the history section doesn’t offer more than a slideshow of game art and screenshots for the games outside of the collection. Each of the seven games in the collection features detailed notes about the story, development history, tips and tricks etc. I’m not suggesting that every single entry in this timeline needed to have as much detail like that, but a quick blurb about each one would’ve been appreciated. That being said, that is a minor nitpick, and everything else here is a great addition. Unfortunately, the museum is where most of my praise of Samurai Shodown NeoGeo Collection ends.

I will get this statement out of the way first: the games themselves are presented well, and they play well too in both docked and handheld mode. I found no issues with the actual gameplay outside of my lack of skill. The weapons-based combat is generally quite fun, and the systems at play in each entry are interesting. I can see why this series is so popular; there is a depth to it that I didn’t even begin to scratch, combat can be extremely tense, and the tide of battle can turn at any moment.

As someone who is brand new to this series and not too well-versed in other fighting games of the same period, this game is a terrible starting point. There are no training modes to speak of, and the games generally do a poor job of explaining how everything works.

For example, if I wanted to know how to execute a Fatal Flash (or even learn what that was in the first place), I have to exit out into the museum and read the tips and tricks section of Samurai Shodown IV (even though I need to know how to do it in Samurai Shodown V). And even then, that doesn’t give me enough information to pull it off, because it requires the knowledge of other systems in the game. And this is important because fully completing the arcade mode in Samurai Shodown V Perfect requires the use of a Fatal Flash or another move that isn’t explained anywhere in the game. 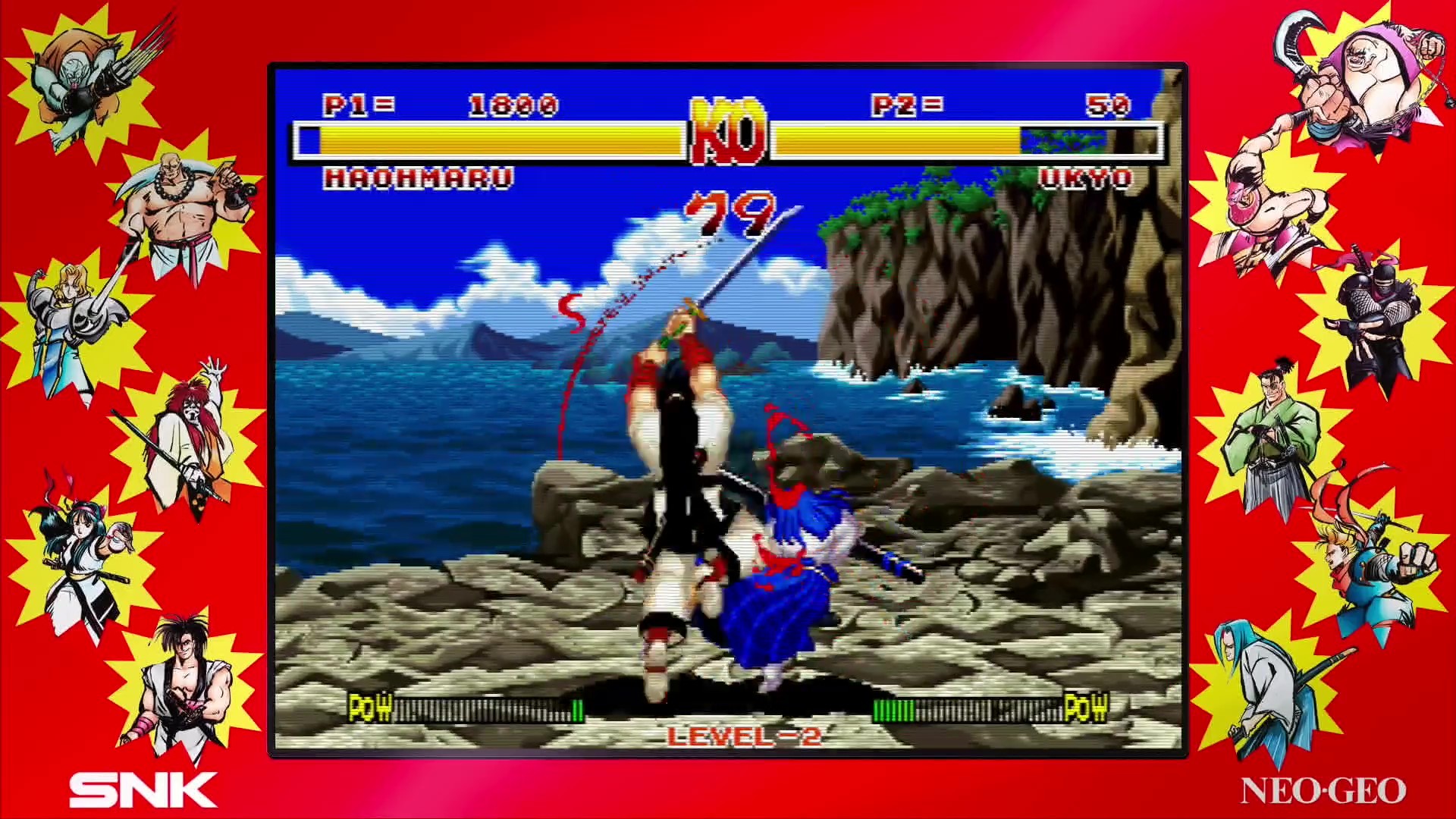 In the special moves section of the pause menu, there are a bunch of symbols next to the button combinations required to execute the move. Most of these are explained in a legend on the right of the screen, but there are a few that are not present. There were so many moves that I had no idea how to pull off because there was a yellow symbol with arrows pointing down that kept showing up. And even after a google search, I still don’t know what it means.

This made my experience more frustrating than fun. I got the most enjoyment out of Samurai Shodown V Perfect, which fixes gameplay bugs from the previous entry and adds expanded story for each character in the arcade mode. In this game, I was able to pick one character and try to figure out how to make them work for me. I was pretty sure I understood what my inputs were doing, and was pulling off moves intentionally with some consistency. But I was still left frustrated because there was so much that I didn’t know how to do, and there was no in-game way to learn it.

That’s just the experience of a newcomer; if you’re already familiar with the franchise, you will not have these issues, and you’ll be able to have a great time in the arcade mode. But what if you want to take your skills online and see how you compare to players around the world? Well, if my experience is anything to go by, that will be nearly impossible.

There’s no kind way to say this: my online experience with Samurai Shodown NeoGeo Collection was awful. Right from the character select screen, there were problems. The frame rate was cut in half (and that might even be generous), the music was chopped up, only playing every other note, and there was a ton of input lag. And all of this was if I even found a match. I was only able to play two. 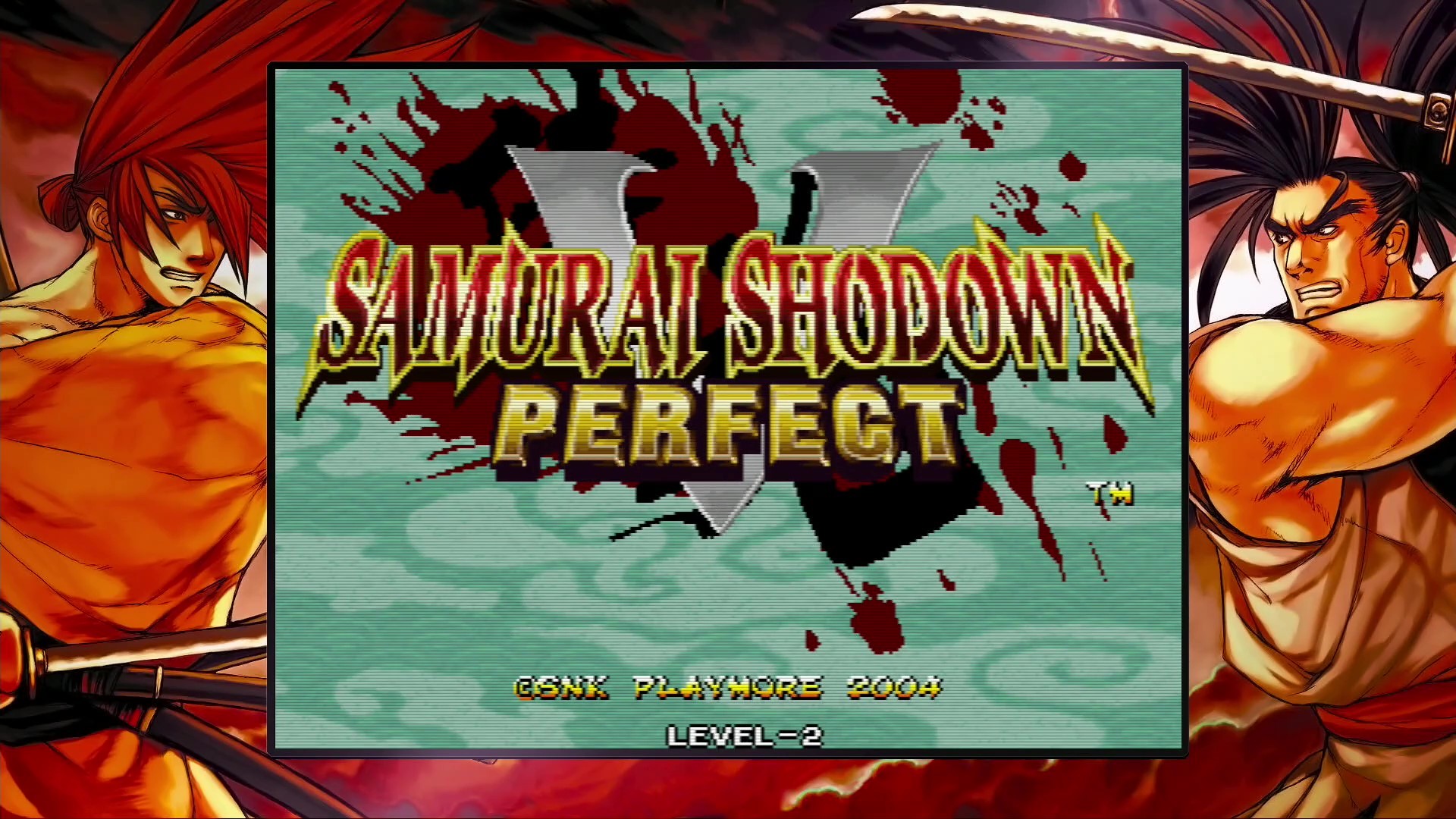 In Samurai Shodown V Perfect, it took me close to 20 minutes to find a match, and this was after maybe the tenth time trying. Of course, that match ran poorly, with all of the issues I mentioned. And as soon as it was done, I got a software error and was kicked back to the Switch home screen. I tried again to connect and immediately got the same error message.

In Samurai Shodown II, I let the game search for well over 30 minutes before giving up on it. And while I was writing this review, I let it search again, only finding my second online match ever after about 25 minutes, where I encountered the same issues. I checked my internet connection, but everything was fine there.

Based on my experience, I do not recommend Samurai Shodown NeoGeo Collection. While the museum features a ton of great content and behind the scenes looks, the games are unkind to newcomers, and the online is barely functioning. Unless you’re a veteran player content with purchasing the game for its offline arcade and versus modes, it might be better to save your dollars for another game.