Hack and slash games used to be the norm in the mid-90s, but what they usually lacked was a solid story and interesting world. 20+ years later what Young Souls bring to the genre is a fresh, exciting look, challenging gameplay, and a world ripe for engaging storytelling and characters.

And by old, I mean ancient civilizations and history on the brink of war, fleshing out this incredibly fun and interesting story.

That’s where we find orphans Jenn and Tristan; twins who live with The Professor in his old house that looks like it was stripped right out of Beetlejuice. After running a few errands and meeting a handful of fun characters, you are thrust into the secret world of warp gates, Gobbons (or goblins if you will), and underground dungeons. Playing as the twins, you try not only to save the world but of course rescue the aforementioned Professor who has been kidnapped.

In the first hour of Young Souls, a lot of information and exposition is thrown your way, normally not my cup of goblin tea, but here it’s easy to be engaged in the story and those around you because the writing is excellent. It’s witty, fast, smart, and most importantly, makes the dozens of conversations your having, fun! Often I found myself chuckling at what I was reading whether it came from the twins or the Gobbon enemies. 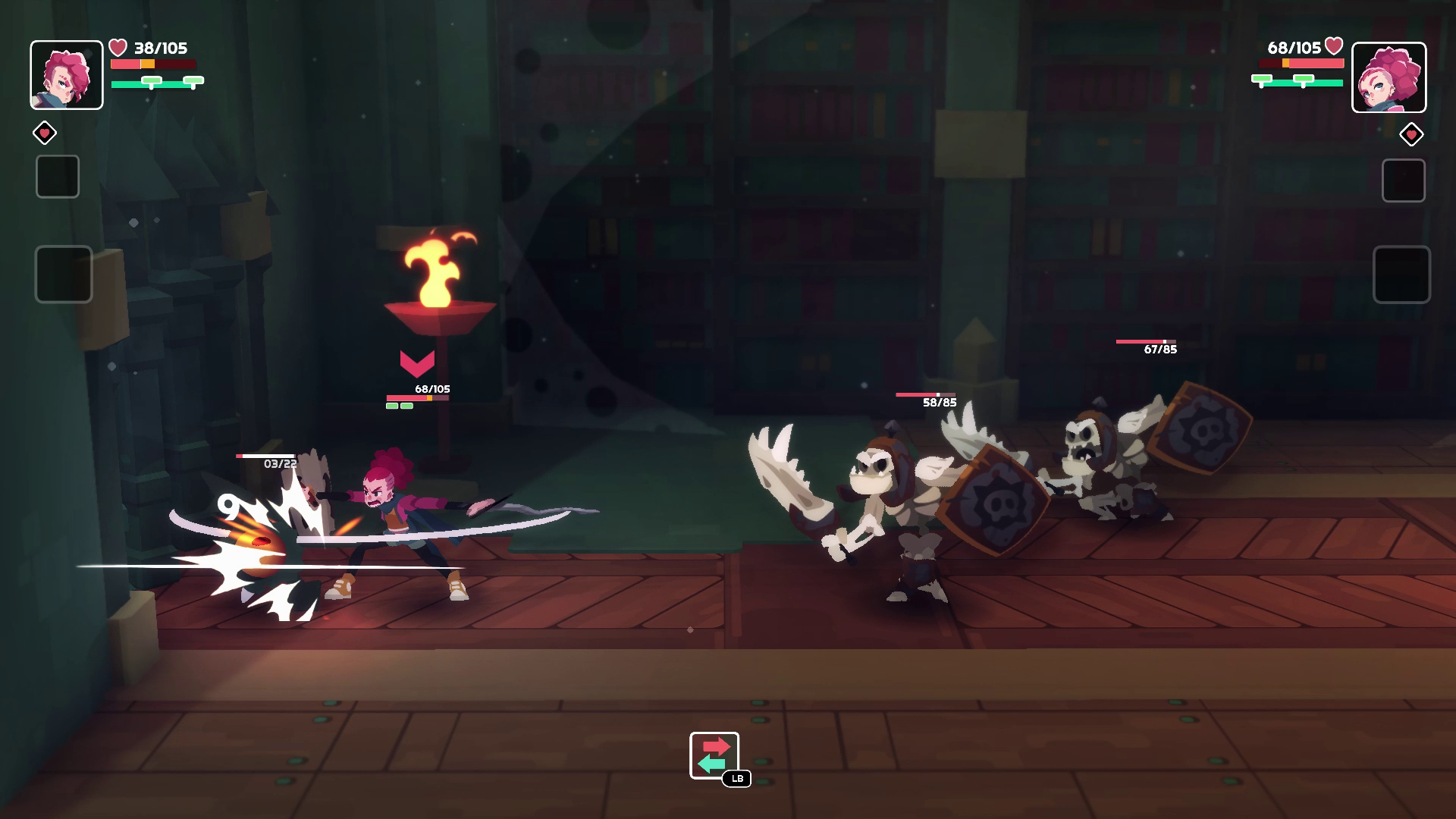 All of it allows you to be invested in the adventure you hack and slash your way through as Jenn and Tristan. They discover something new about themselves, their past, the world around them, and then of course the crazy one just below their feet.

Twin Blades (or axes, or knives…)

Young Souls has a lot going on, not only in its story but also in its gameplay and dungeon crawling mechanics. 1P2P Studio has melded a number of genres and styles together to create an RPG-like experience with classic hack and slash fights. 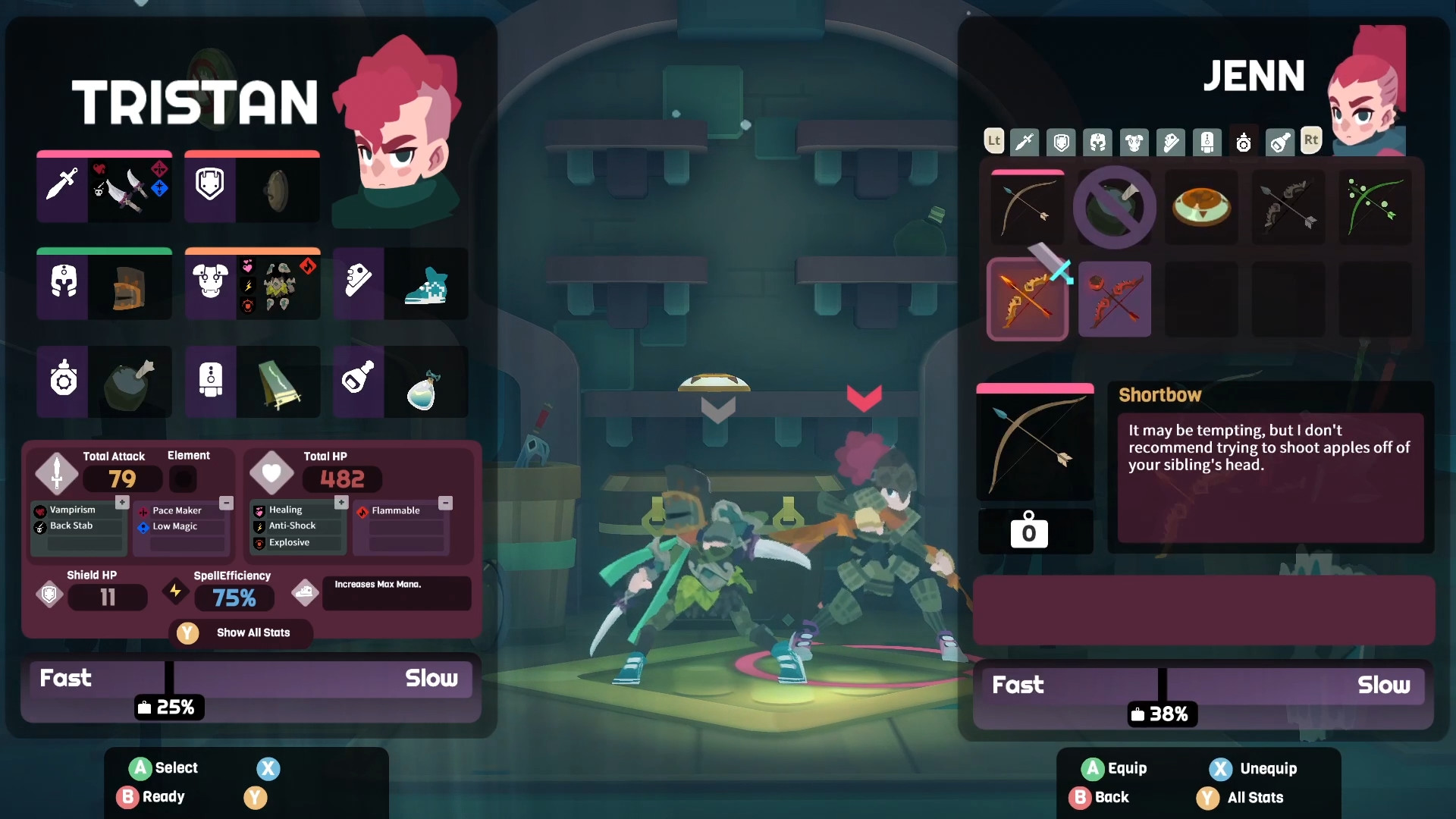 As the twins, you jump through the magical underground gates to face enemies one area at a time. Each level has a series of doors to be unlocked, with an end goal of defeating a series of mini and final bosses. This is where the gameplay brings new ideas to the table with a challenge for a range of players.

In a single-player playthrough, you can swap between Jenn and Tristan on the fly with a simple button press. This is a great way to use two different styles and loadouts, without feeling like you’re doomed the second the enemies take their first swing. It also allows for some creative combos and fun with various weapon abilities. Feeling underpowered? No problem, just knock down the difficulty setting one notch and continue the dungeon crawling adventure at your leisure. The challenge will still be there and you can always bump it back up at any time. A welcomed touch not seen in enough games nowadays. 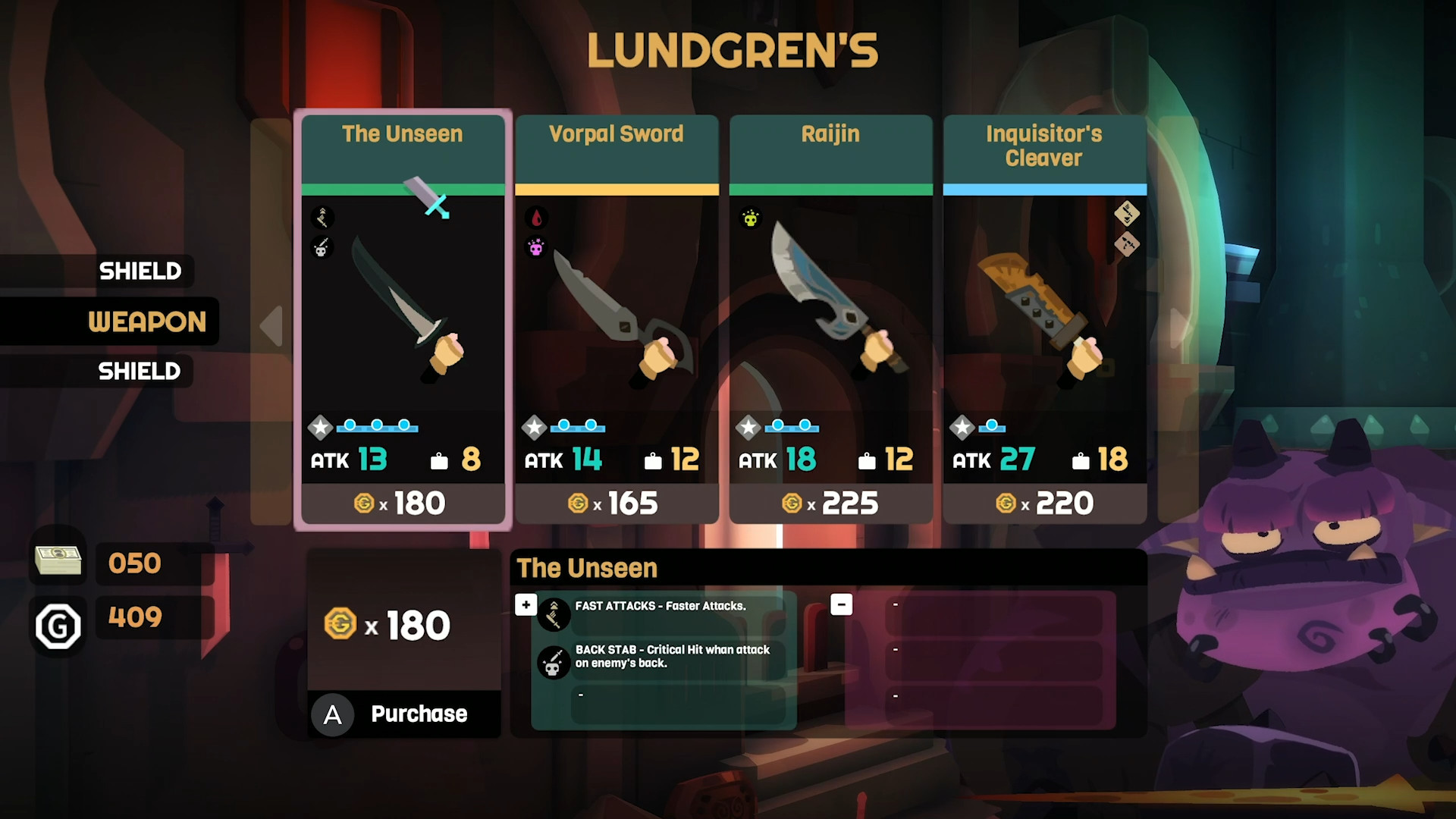 Each mini arena has a 2.5D layout, similar to classic games like Streets of Rage or Double Dragon. Just like those classic games, Young Souls requires you to defeat minions and larger boss-like enemies with precise timing. Perform the perfect block, and strike in time to chip away at their health bar. I had to repeat several fights but in the end, I felt rewarded not only because of the challenge, but also the satisfying loot that pops out when I was victorious.

Along the way, you collect items and money to upgrade weapons and equipment. There are a ton of options here; new sneakers might increase item drops, while a shield will allow you to block more attacks. Each piece has its place and each one looks and feels different. There’s more depth than meets the eye in Young Souls, weapons and armour also have weight to them. Sometimes the stronger your axe is, the slower you’ll swing and run; likewise, for anything, the twins are wearing. At times, this can feel like an artificial difficulty spike as most enemies move quite fast. It also forces you to change up your loadout and try something new. For me, this is a positive as I tend to get a little too comfy with early-game loadouts and use that as a crutch.

One of the best things Young Souls has going for it is the option to play co-operatively. While I personally didn’t have a chance to try this out, it’s easy to see how it’d add some more fun to the more difficult Gobbon dungeons. 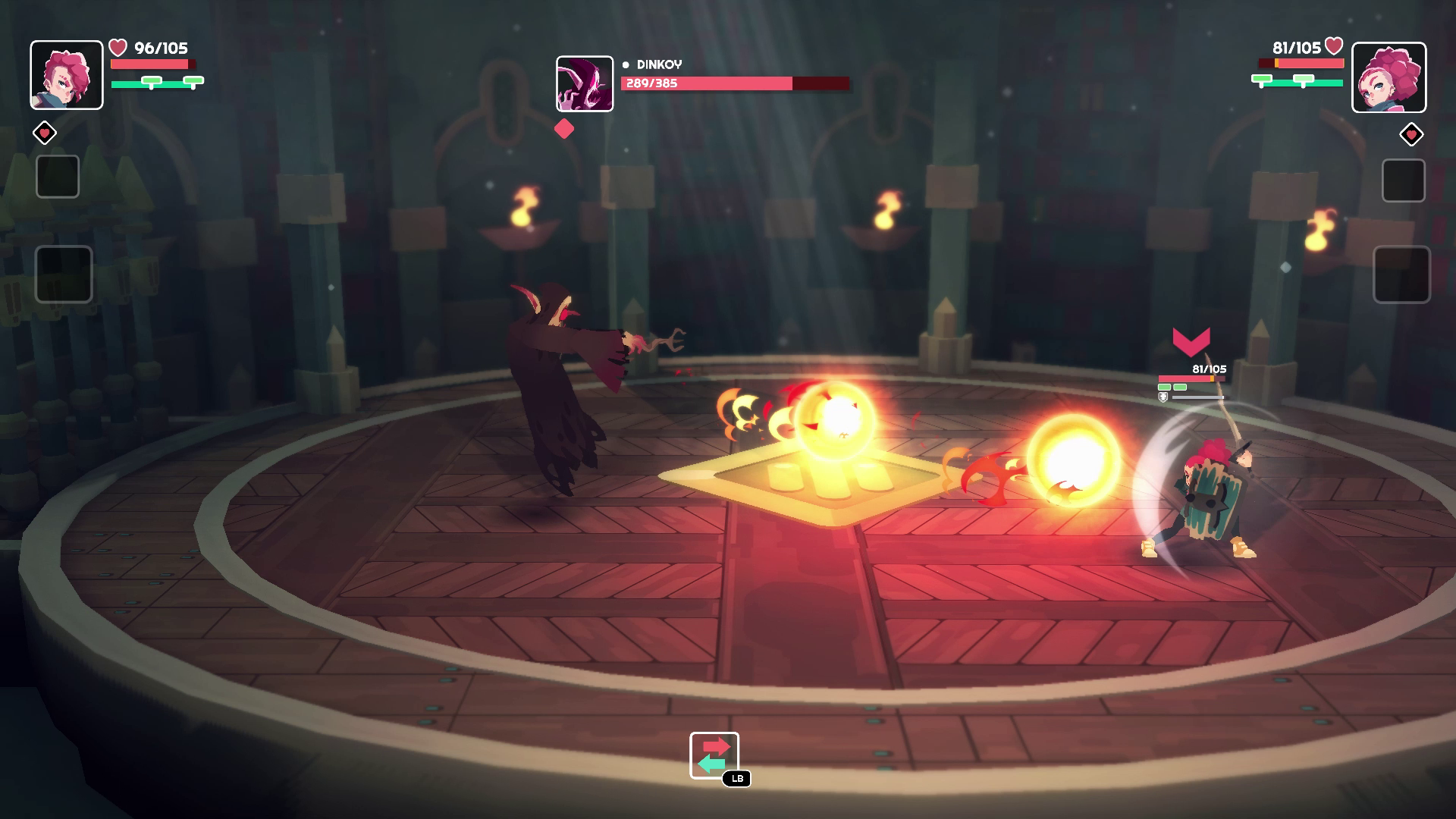 I want to see this game come to life as a TV series. It’s not something I’ve often thought of while playing video games, but then I made my way through Young Souls. Arcane blew me away last year with its adaptation. Young Souls has a perfect cast of characters, awesome adventure, and an amazing look that’s just perfect for TV. Time and time again while I played this game I thought to myself, “Wow, this pops as a game and could be really fun if a streaming service picked it up.” 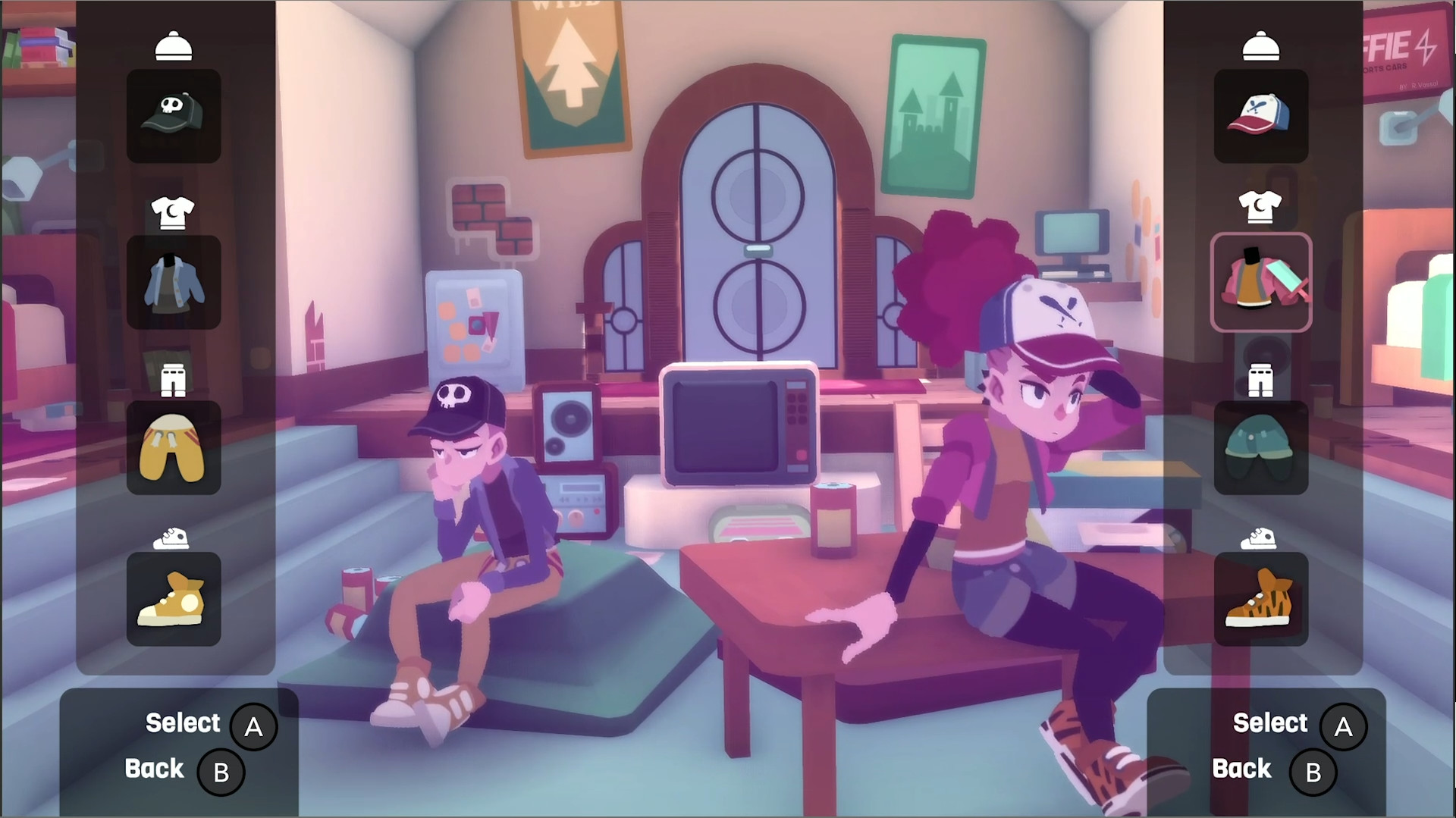 While the writing is definitely not family-friendly due to its profanity from time to time, nearly everything else about the game is. The art style is unique and moves flawlessly through the varied dungeons. Even above ground, as you make your way through the real world and discover more about the people around you. Each character has a personality and they quip their way through conversations and look great whether they’re sitting at a desk or fighting hordes of goblin-like baddies.

Young Souls is another indie title that’s easy to recommend. The fights are quick and fun and provide seasoned gamers with a challenge. The writing is excellent no matter how the story and character moments are being delivered. The art style and design pop with every scene whether it be fast-paced or simply a conversation between a magical goblin and a couple of orphan twins with swords.