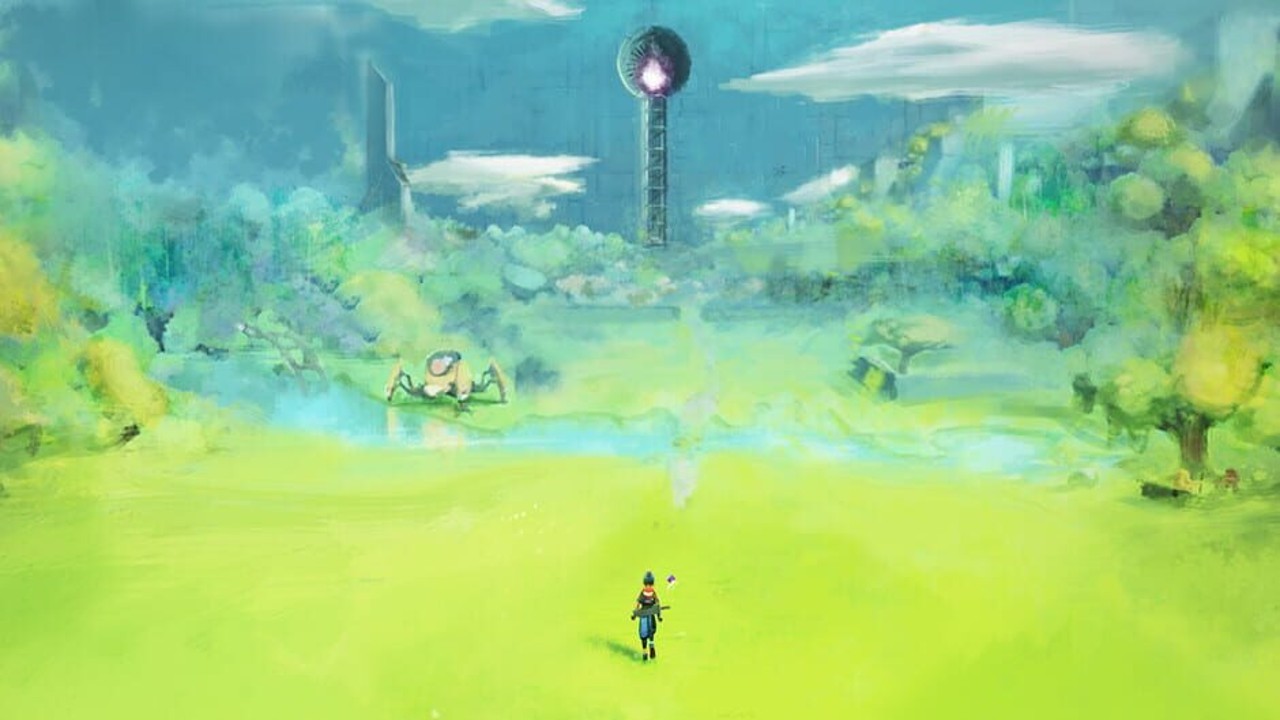 XEL [Zel, excel or x-ul, depending on who you go by in the game’s voice acting] is the indie Zelda clone I’ve been waiting for… and sadly, I think it’s one I’m going to have to continue waiting for… because it’s currently very broken.

Coming to us from the aptly-named smaller team at Tiny Roar, XEL is a simple to pick up, top-down adventure title that is now available on PC and Switch, with Xbox and PlayStation ports coming soon. However, it’s a game that needs a lot more polish and quality of life updates before it’s playable on any platform.

Combat that will steal your heart… quite literally

Let’s start out with the good in this not-so-good experience.

Xel‘s combat is pretty simplistic in its attack, dodge and occasionally block antics. It’s something I actually like because it’s a nice reprieve from what AAAs are offering these days with overly complicated combat systems.

Puzzles also play an important part in the overall experience. They start off a bit on the easy side. The main solution is pushing a block to assist a jump to a further distance in order to grab a key from a chest. The game’s time-travelling mechanic and various physical tools improve this greatly.

That’s where the good ends for now because there are some serious problems with XEL’s combat and puzzling.

Let’s start with combat. Although it is quite simple, it feels clunky at times, especially during boss battles. Hit boxes won’t register properly at times, and inputs such as rolls or attacks can stick. However, even if they don’t, you’ll often find that the health and stamina you have at any given point aren’t quite balanced enough for you to handle the challenge presented to you.

For example, the game’s first boss [quite literally ripped from Breath of the Wild] has a tracking beam attack that will devastate you the second you run out of health. That is unless you spend at least a few death working out the perfect dodge window. Even then, the battle almost definitely becomes mitigating when you take damage because there are hardly any invincibility frames present, and a single hit will drain half your life. I got through the first battle after the game suggested I take a break and sent me back to the title menu after more deaths than I could count. While these issues don’t ruin the game for me, I’ll admit that they haven’t helped me enjoy it.

Tell me more by telling me less

I do want to keep this review constructive, so I’m going to take some time now to praise XEL. What I’ve seen so far in the environment has taken my interest.

The story follows the genre basis of the silent protagonist has no memory and must find out who they are. The writers have subverted the norm here by eventually giving player character Reid a voice and waking her up to the story’s rising action.

Reid isn’t going to be everyone’s cup of tea. Her personality is sharp and cutting in an awkward kind of way. She starts off rather curt and is slightly shoe-horned into a story that preaches acceptance, humanity and more than a healthy dose of overcoming fear. It’s all well and good, but it’s almost too much at times. 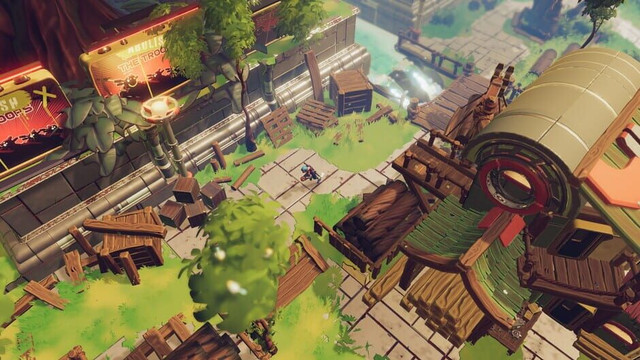 The story here has a lot of potential. It explores Reid’s ability to manipulate time and reincarnate, which comes from the stone lodged in her head, and the fact that it’s causing her amnesia. Reid’s adventure explains a lot of that, but it’s a lot… Plus, a lot of the story’s exposition you’ve experienced before has been told in a better package.

I’m going to bring Breath of the Wild back into the conversation here because I know that it also isn’t for everyone, but it’s certainly for me.

Much like the aforementioned game, XEL is on the larger and emptier side, with a significant amount of its exploration hidden behind a barrier of “you’ll need to come back with another item or perhaps the game’s time mechanic?” And while that’s all well and good… it’s all that’s really been there so far.

My personal enjoyment with Breath of the Wild’s story is that it takes place simultaneously in two places spread 100 years between one another; the game offers a story that has already happened in the form of mostly optional cutscenes that offer a new ending but don’t hamper the overall experience. And secondly, it tells you one that is present and evolving at your own speed. It’s completed with stories told through progress, interaction with people, diaries and even subtle remains in the environment. Mainly, I like that we don’t need to hear from Link because we learn of him from Zelda and various storytellers and their songs and spoken words.

XEL tells its story of a doomed planet and equally doomed colony ship in a way that seemingly holds your hand and guides you through it all while prepping you for a rug-pull that you’re sure is coming. It works well enough, and there’s intrigue even if there’s trepidation. Though, it’s a little out of place in a game that mechanically doesn’t even have a full tutorial. Unlike Hyrule, the titular spaceship here feels somewhat removed from the story it’s trying to tell. I’d love to go back to it at some point and see it through, rug-pull and all, but the game’s performance currently renders that to be not worth it at this stage in the game.

A bug in the system… or ten

There’s no easy way to put this. XEL is a technical mess. I rarely add a video to my reviews, but I had to here.

There’s also a fair amount of disappearing assets, assets popping into frame late and even characters who just float or stop moving entirely in the case of this video.

From the video above, you’ll also notice another quality of life issue: item descriptions will show up again every time you die. This is one that even Zelda‘s developers have struggled with over the years, but it’s one that gets very tiresome quickly.

Speaking of tiresome, if your game has backtracking or loss of progression on death like XEL has, then you have to be certain that a bug or an unregistered input isn’t going to break the game. Both occurred so many times in my experiences with XEL that I turned it off to yell at and be frustrated with Madden 22 instead — my wife will tell you how upset that game makes me, and how XEL does so in a way that is far worse. You shouldn’t feel like you are walking on a minefield where one wrong step can have you floating in the air, especially when the last time you’ve saved is 15 minutes ago.

Being positive again, I rather like the Jak & Daxter character models and biomes that looked lived in. The colour palette is bright and fresh but also industrial and aged, and the music and full voice acting are pretty great for what it is. But there’s little to no quality of life here right now. The map is hard to navigate and doesn’t give you nearly enough information. At one point, I had a mission that told me to “go to The Bog,” — but it wasn’t labelled on the map, and I admittedly couldn’t remember how to get back to the square where I was sure I’d seen the text description calling the area “The Bog” pop up.

Another problem I’ve had is that top-down games with larger assets in the frame need to have some transparency for when they block your vision. That doesn’t happen here, and it causes a great deal of stress when I’m trying to solve a puzzle or fight a boss.

I guess where I’m going with this is that for a sub-50-person team with a Bomberman clone, a Leisure Suit Larry phone app and a BBC Nature quiz under their belt, XEL is a grand ambition. It seems the goal here was to go from being a team with a single F2P PC title to a sophomore something originally pitched as a cross-platform experience that you’d be compelled to own on all consoles and PC. The problem is that it’s an experience that would be much more enjoyable if the team focused on just one or two gaming systems because it feels like this is a game the developers love but aren’t quite accustomed to making and haven’t tightly focused on enough.

I’m going to say a lot with very little to finish this review. XEL is currently a game to avoid. There’s a world of indie and AAA Zelda-like games out there right now that aren’t completely broken. The game is already on sale on PC and Switch, and it’s coming soon to Xbox and PlayStation. However, before you pick it up on any of these systems, check back to see if the quality of life catches up to the quality of ambition.

Not recommended
Story has some grip
Music and art is nice
Combat is not balanced well at all
So many bugs!
It's not finished!