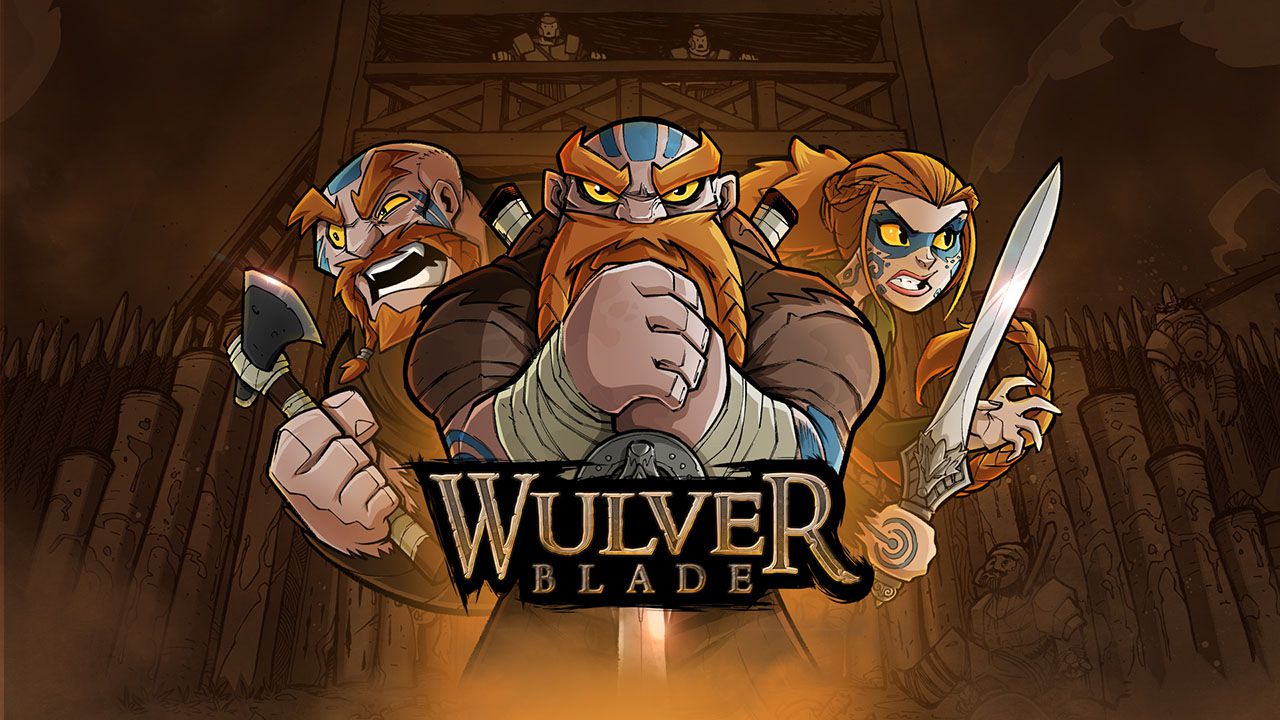 Many great titles start with a single idea, which is then brought to life by a team of hundreds over the span of several years. Developer Fully Illustrated is run by one man, Michael Heald, and he has spent ten years in the video game industry helping other developers create 2D game art, illustrations, websites, and brand logos. However, the time finally arrived for other developers to help him. The undertaking of bringing his idea to life lead to the help from talented individuals such as Darkwind Media to make his dream a reality. This dream resulted in the creation of Wulverblade.

Wulverblade tells the story of Rome’s invasion of Britannia in 120 AD by the 9th Legion. An initial defeat against Queen Boadica angered Rome’s ego, and so they return to finish their conquest. The tribes are no match for Rome on their own, and so it falls to three Caledonian warriors to unite and defend the tribes against the impending war machine. Everything will be put on the line to defend their home and family. You can select between three playable warriors: Caradoc, Brennus, and Guinevere. Each offer their own advantages and disadvantages in combat, and this adds to the overall replay value as each character offers a different experience. Caradoc’s playstyle is the most balanced, Brennus is slow but powerful, while Guinevere favours increased agility and attack speed, making her more difficult for enemies to catch. 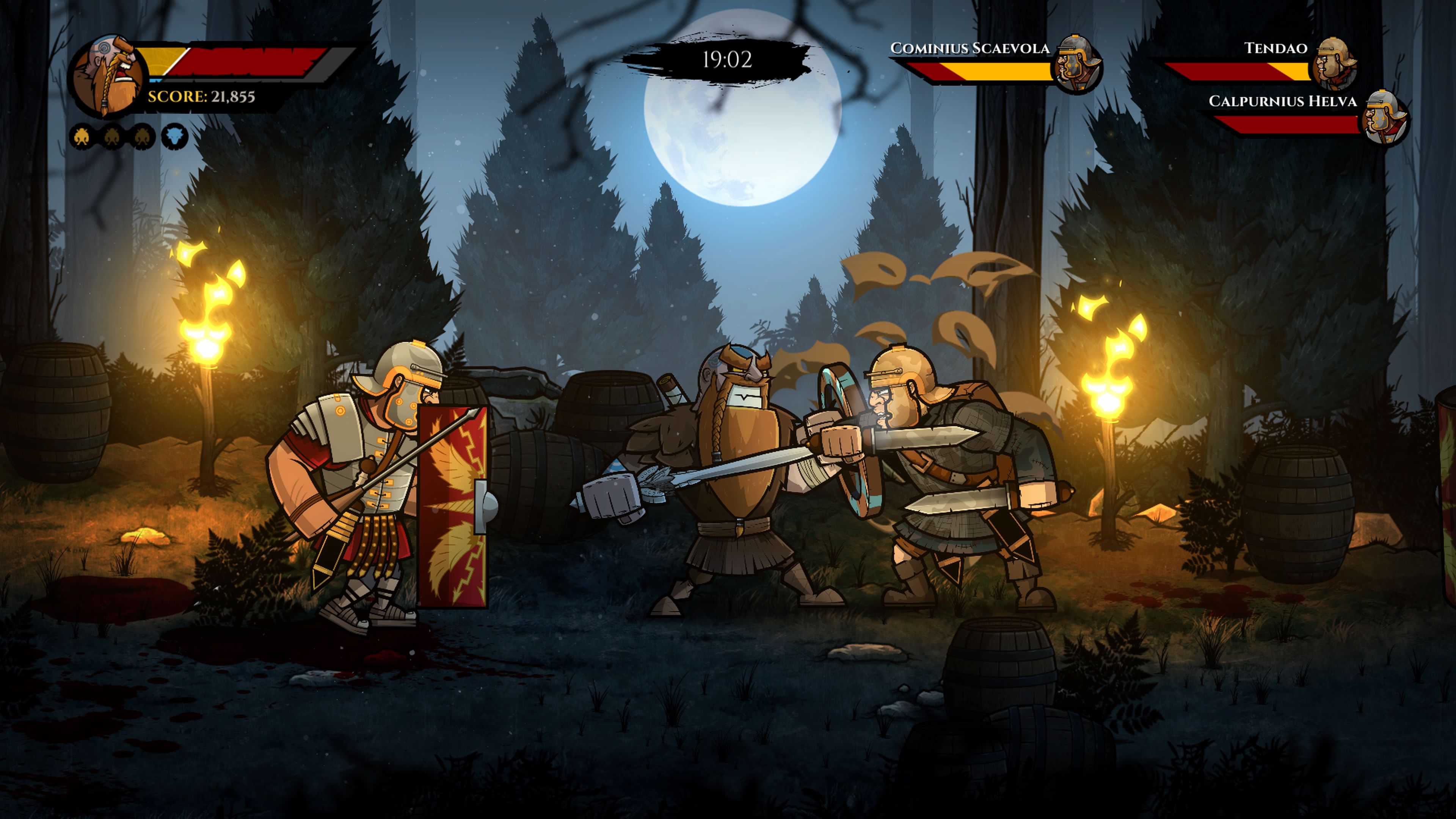 Game modes fall under two categories: campaign and arenas. The main campaign mode can be played in standard mode with checkpoints and saving, while arcade mode will limit you to only three lives and three continues. Arcade mode is definitely for those seeking out a challenge. Arenas will have you fighting for survival against countless waves of enemies across seven different maps. Each new wave will pit you against stronger opponents while increasing enemy count. Arenas can be used practice your skills on the battlefield and improve your tactics against the more powerful Roman forces.

Wulverblade offers two difficulty levels to choose from. The initial selection of a normal difficulty is most common, but here it might deter some players as they will meet an untimely death at the hands of the enemy. However, this would only occur due to the improper use of skills and not utilizing the defensive controls at your disposal. You will need to dodge, block, counter, and charge opponents to gain the upper hand. Anyone looking for an engaging experience should select the normal difficulty level and look forward to what hazards lay before them. 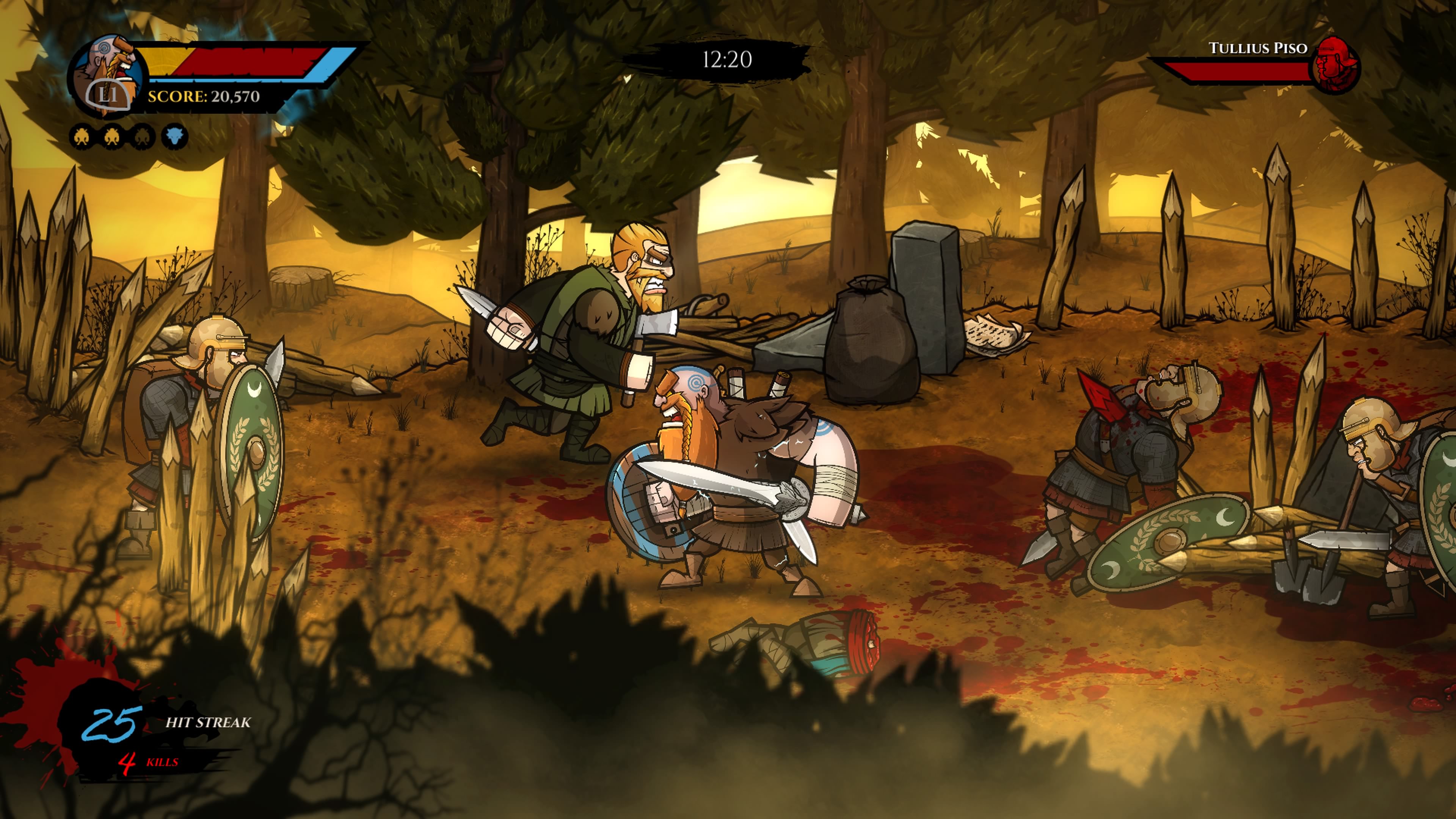 Wulverblade’s visual artistic presentation is stunning and immediately warrants attention. The design takes a brutally blood-frenzy experience and turns it into a beautified canvas, your sword being the brush. Many aspects are combined to create environments that breathe life into every step. The inclusion of foreground and background elements intensifies the immersive experience as not only do they show animated objects throughout, but characters also traverse environments in the distance and at times interact with your progression. The only concern with this is that objects located at the bottom of the screen are sometimes difficult to notice. The amount of detail present in both environments and characters is exquisite. So much so, that you will notice yourself progressing slower at times just to take in the views that surround you. Another noteworthy visual element occurs during a segmented stretch of combat that occurs as a silhouette. Upon completing the first level, you are presented with an ancient map of Britannia. Here you are able to progress throughout the game, replay previous levels, and attain historical knowledge of the time period.

There is no doubt that the development process of any game undergoes significant research in many different areas. Most research is held behind closed doors and used to create a polished title that millions will enjoy. However, Wulverblade opens their doors and showcases some of their research through historical notes, pictures, and videos. This information details a significant stage in the development process as it illustrates the influence these historical locations and information played on the overall creative direction. It is clear that Michael Heald, the creative director, and his team care deeply about this time period and set out to educate players and increase the overall immersive experience. It is easy to miss that Wulverblade succeeds at the retelling of not just one story, but two. From beginning to end, we walk alongside Caradoc and the developers until we reach its conclusion, excited to have been part of the experience. 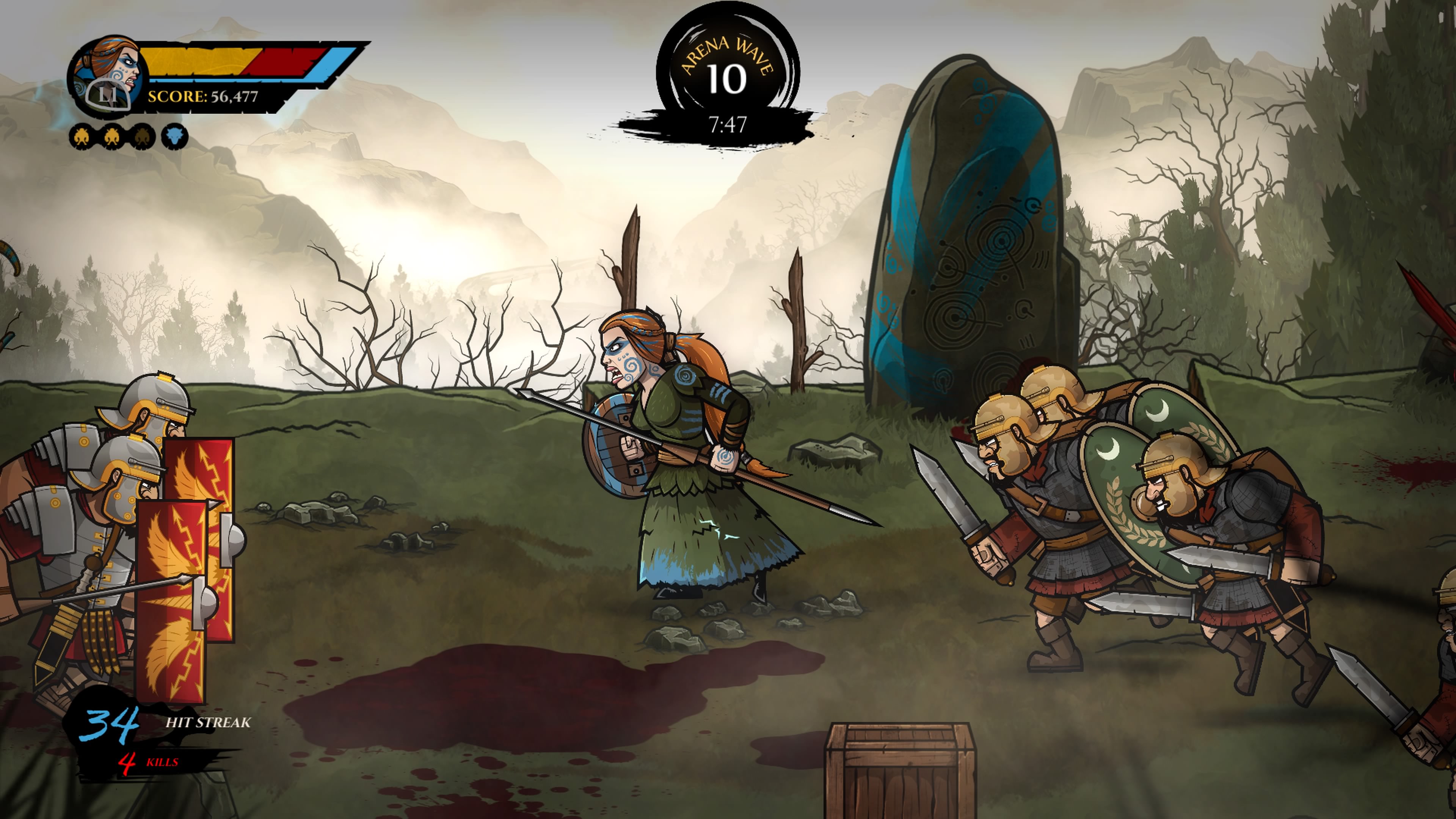 Roman influence was abundant and it extended far past the borders of the Roman Empire. It is in the early levels of Wulverblade that this influence plagues the minds of local tribes with the hope of a better life which turns brothers and countrymen against one another. The early enemies include melee units who wield swords, axes, and spears while the ranged units impede your progress by attacking with throwing daggers and bow and arrows.

Once encountering Roman soldiers, you are pitted against a much stronger and more versatile fighting force. Roman auxiliaries, formed of non-citizens, formed the light infantry of a legion while the legionary was considered a heavy infantrymen and was formed strictly with Roman citizens. An auxiliary’s arsenal consisted of swords, also known as a gladius, bow and arrows and spears. Legionaries were easily recognizable with their tower shields, also known as a scutum, javelin, also known as pilum, and a sword at their side. The onset of Roman enemies increased the level of difficulty resulting in a new and adaptable strategic outlook on how to deal with the threat.

At first glance, Wulverblade resembles an old-school button-mashing experience. While true, it takes the genre to a more in-depth combat experience that gives the player several options on how to approach each sequence. Button-mashing would simply lead to frustration as continual death and restarts will ruin the experience. Controls are quick to learn as your offense includes a light and heavy attack, an uppercut, a powerful energy area of attack that will deplete life when used, and a signature charging attack to break through an enemy’s defense, which is unique for each character. Heavy attacks are only available upon picking up one of many dropped heavy weapons scattered throughout levels. Items such as daggers, swords, stones, and barrels can be picked up and hurled at your opponents, impeding their advancement. Defensive controls include blocking, dodging, grappling, and countering enemy attacks. 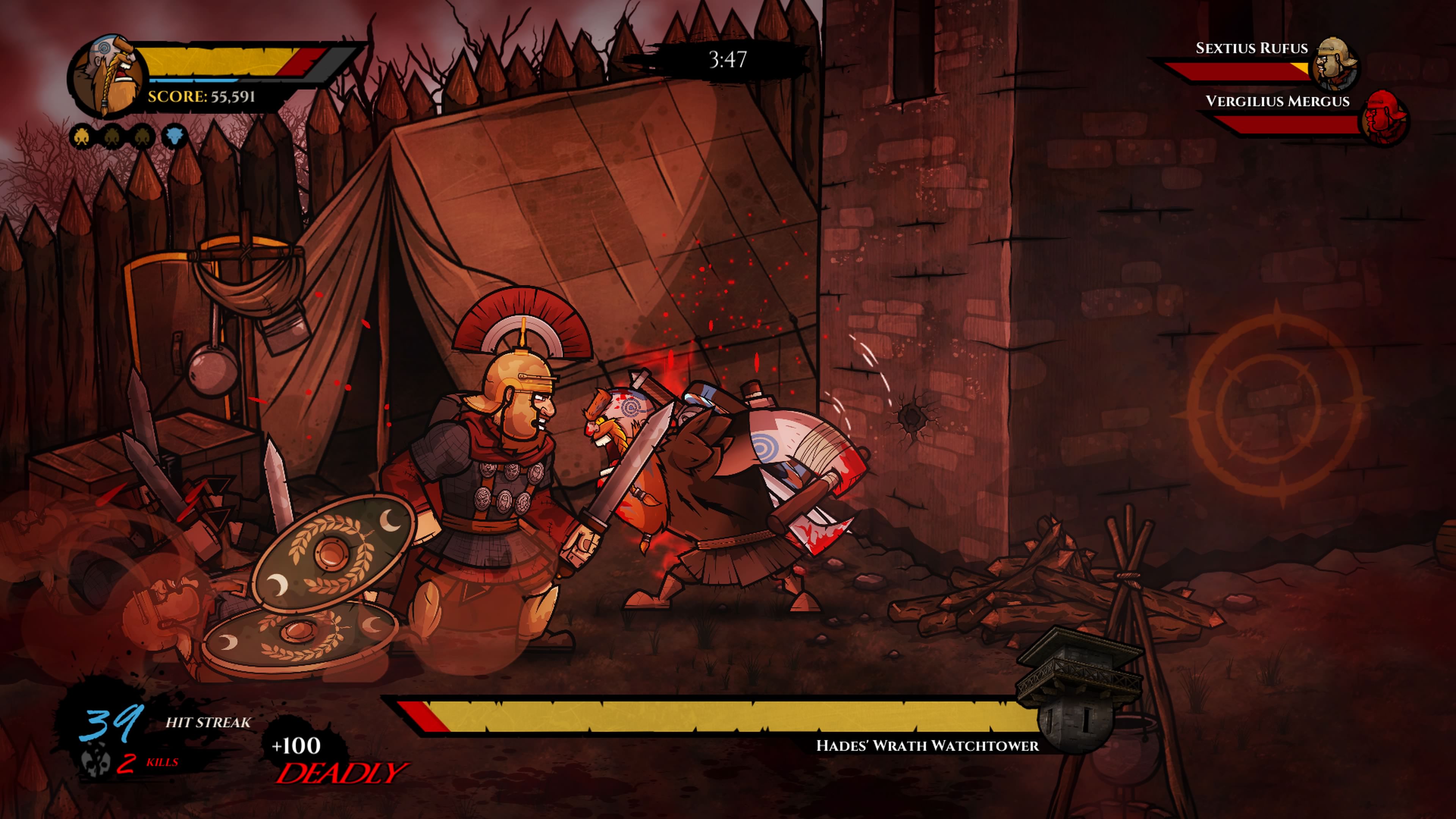 Progression throughout will see a transition to more strategic gameplay as enemies become more difficult. However, every opponent can more easily be overcome once learning their weaknesses. Enemies will continually flank your position as they appear from both sides and offer up melee and ranged threats. A strategic approach requires a balanced effort of offensive and defensive mechanics. My only grievance occurs with being caught off-guard as enemies attack off-screen, but that is a more genre specific fault. Another opportunity to lessen the curve of difficulty is to invite a friend to join in on the quest of Roman expulsion. The two player couch co-op is refreshing and can make for some quality entertainment as you and your friend take their frustration out on one another. The brutal nature of combat is best defined by the ability to dismember and decapitate enemies. These fallen limbs can also be thrown at enemies, showcasing the barbaric nature that the local tribes possessed. This barbarity was fueled by the rage each individual possessed within them.

The inner rage takes hold upon filling the gauge by means of successful attacks, transforming the brave Caledonian warriors into frenzied killing machines. This transformation also alters their weapons to either dual-wielding axes, brass knuckles, or claws, depending on which character is currently selected. Players become immune to damage, acquire increased attack speed, and each hit replenishes lost life. Once per level, players can also summon wolves to come to their rescue to devour enemies when overwhelmed. These skills, once learned when to be properly utilized, offers a significant strategic advantage and will postpone becoming another victim of Rome’s glory. 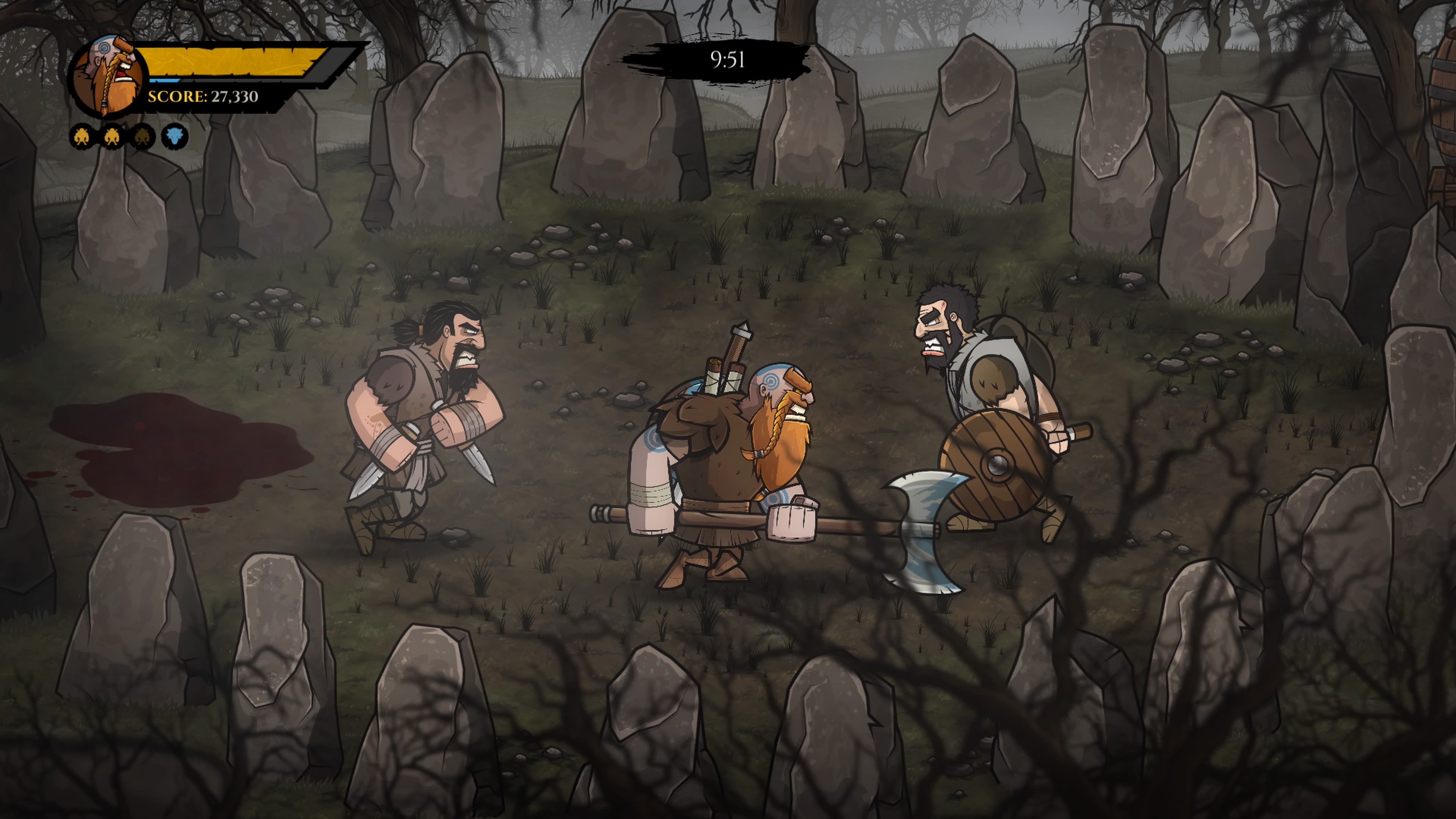 An exciting feature of Wulverblade is that each level concludes with a boss encounter that tests strategic might to see if you can compete against a more worthy opponent. These various unique bosses offer up difficult, but extremely rewarding experiences. Falling victim to their might will most likely occur early on and the importance of checkpoints throughout each level will contain the onset of any potential frustration. These engagements maintain a higher success rate if you reframe from head-on confrontation and instead take the necessary time required to learn their patterns and weaknesses. It is at this point you utilize the strategic advantage that each character possesses and flank their position when an opening appears. Attaining the necessary information to defeat these enemies decreases their difficulty only slightly as they continually call reinforcements to fight by their side.

The music encompasses the overall atmosphere throughout the game’s entirety and perfectly complements the brutality and dark environments of each location that you explore. For an indie production, the voice acting is solid. More in-depth dialogue and conversations take place with story narration and boss encounters, while normal enemies will continually call out for help upon confrontation and then utter a death cry as they become one with the earth. Much care was also put into the sound design, but hearing the impact of weapons crashing down upon shields is rather satisfying. There is also a sequence where you encounter Roman soldiers around a fire talking and one utters, “People should know when they are conquered,” which might indeed be a salute to the film Gladiator. 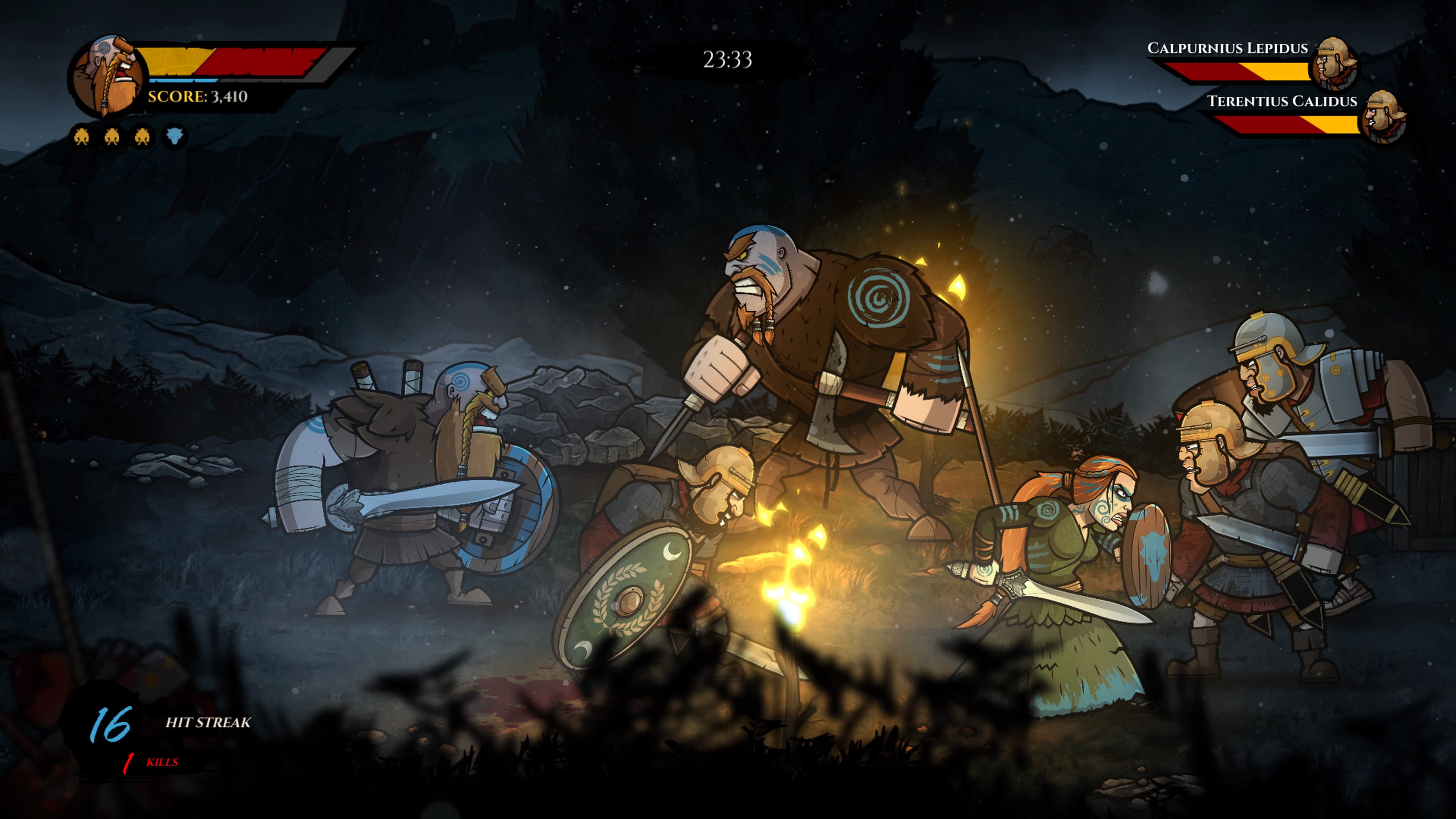 Repetitive gameplay may be an initial concern to certain on-lookers, but rest assured that this is not the case with Wulverblade. The variety of characters, visually stunning artistic design, and an in-depth combat system creates a unique and engaging experience that makes it stand apart from games of the same genre. The success of Wulverblade’s creation is defined by the developer’s vision. Fully Illustrated started with a plan, gained help and guidance from other developers, and executed the goals they sought out to achieve. The result: an immersive gameplay experience that is fun, rewarding, and educational. Wulverblade may be an indie title, but it sure offers up a Triple-A experience.