Review: Will You Snail?

Every once in a while, should you be so lucky, you’ll come across a game that inspires you simply because it reminds you of what has come before it, but it does something you’ve never seen before.

Will You Snail is one of those games. A one-person passion project of Jonas Tyroller, where a snarky AI entity known as Squid runs you through an increasingly tough battery of tests to determine your intelligence and level of determination… but mostly just to amuse itself.

And if that sounds like GLaDOS from Portal, it should because I’m entirely convinced Squid is just GLaDOS reincarnated as an angrier pink smile from one of those once-a-year fundraising cookies from Tim Hortons.

The value added to Will You Snail? Is that Squid is a seemingly self-thinking AI that has the power to increase and lower game difficulty as well as the ability to predict your next move and find ways to counter it… like through deadly spikes and falling roof tiles.

Jump, Jump, Will You Snail?!

Controls here are pretty typical to the platformer genre. Of course, you’ve got your standard directions as well as a jump that goes higher the longer you hold and becomes a double jump if you push again.

Along the way, you’ll find other tasks like firing projectiles tied to your jump, but the controls are all pretty basic and tightly engineered. 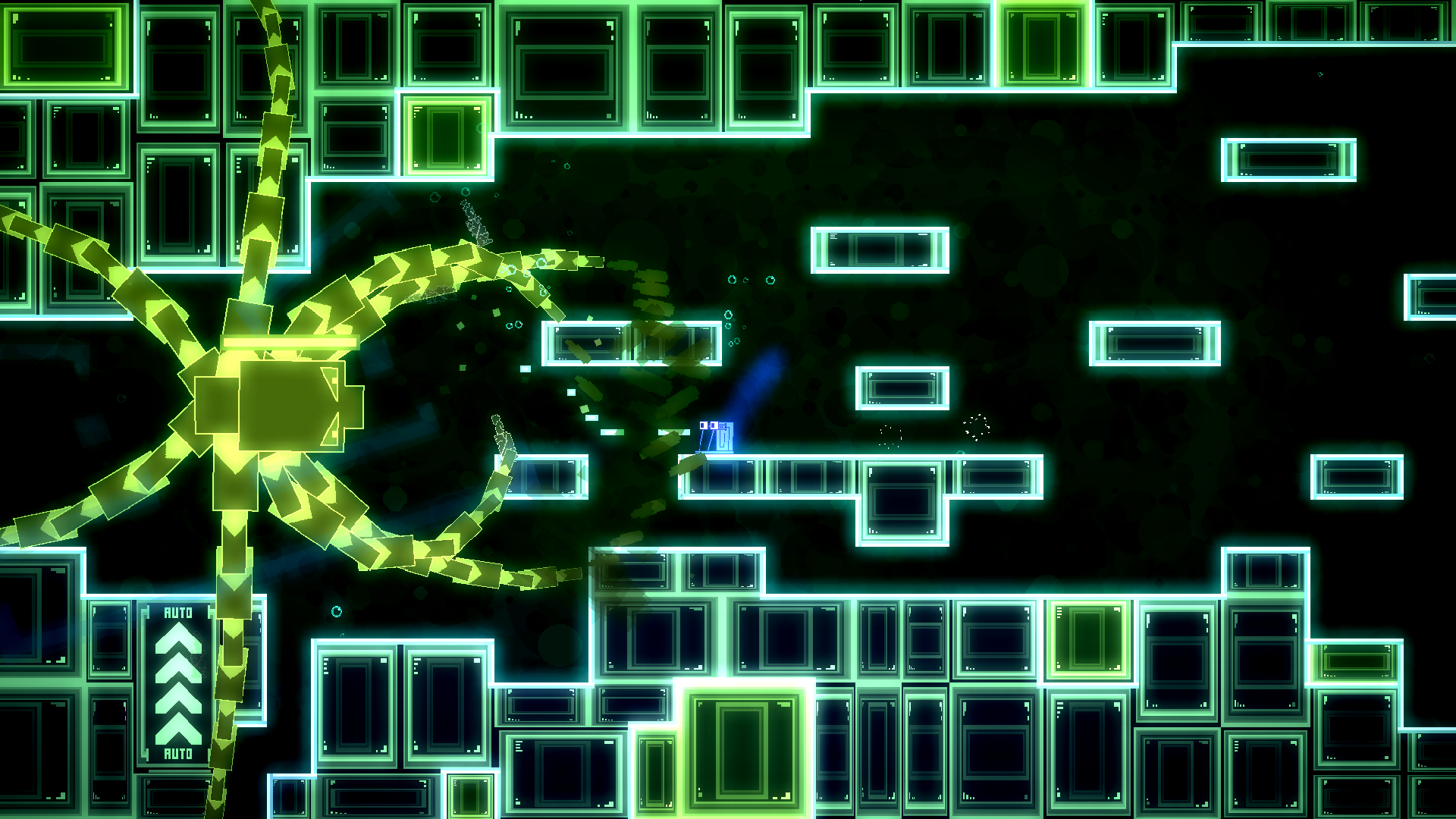 The beauty of the physical experience is that the game is quite welcoming in terms of the ways it adapts its stages to suit your strengths and weaknesses. However, unlike Resident Evil 4’s stealth difficulty manipulation, Squid is sort of a dick about how the game is making changes.

Visually, Will You Snail? Is a sort of underwhelming DOS-menu-meets-neon platformer that takes your focus off bells and whistles and lets you focus on the task at hand.

There are instances where it uses its visual content as a way of moving the story along or giving you a moment to take a breath, but that’s it. Frankly, that’s all it needs to be.

I appreciate the way that visual will react to you. For example, spikes and other hazards give you a few frames worth of warning before they inevitably lead to your death. And highlights will appear of walls, platforms and other obstacles to help guide you. I very much appreciate what that does for overall accessibility. Which is my next point.

Platforming at a snail’s pace

One thing that I want to commend Tyroller on is the accessibility of Will You Snail?

I’ve seen a lot of people refer to the game as being accessible because of the adaptive difficulty, but I want to caution that difficulty does not equal accessibility.

Easy modes do more to impact adaptation on the part of the game AI and approachability on behalf of the human player.

But an approachable game also needs accessibility options to make it work. Just because a mode is titled “easy” does not mean it is easy for everybody.

I do want to hazard against the message that pops up when you access the features, warning that this is not part of the intended experience. This is certainly not the first time I’ve seen such a “yellow label” in front of such menus, but it always confuses me as people should just be allowed to tailor the experience to their needs. They already know what you expect of them through playing the game. And if they are using these features, it’s most likely because they can’t meet those expectations. There’s no need to remind them that you don’t intend for them to use these features.

For what it’s worth, Will You Snail? Is a sadistic science experiment under the guise of a game. It works quite well because of its simplicity in terms of controls and its ability to adapt to individual players.