West of Dead is a roguelike cover-based twin-stick shooter, featuring the voice talents of Ron Perlman. For those that aren’t already convinced to try this game based on that description, I guess I’ll continue the review.

William Mason is a gunslinger with a flaming skull who is trapped in purgatory. The only way out is to fight your way through other lost souls and track down a preacher with dark motives and a connection to your previous life. Perlman’s voice is perfect for this game; his dulcet tones and subtle cowboy twang give life to some great writing, and he was a big part of why I was invested from the beginning.

Story progression comes in the form of chapter breaks when you reach certain areas for the first time and unlockable memories that are scattered randomly throughout the game. The memories help flesh out the world and characters, and the hints towards the sinister story behind them further motivated me to keep going.

Heart-pounding intensity seems to be a staple of the roguelike genre. There is a constant risk of losing all of the progress you’ve made, and it can lead to some stressful moments, especially in the later areas where enemies become more aggressive and plentiful. Even from the outset, there is a pretty significant challenge. It took me a couple of runs to fully understand the interplay of all of the mechanics and get a feel for things. But once I did, the game only got more enjoyable.

The pairing of a cover-based shooter with the top-down perspective typical of twin-stick shooters is great; you can easily see everything that is going on around you, and react to it accordingly. That’s not always the case, and that’s due to the mechanic that I enjoyed most. Often, rooms are dark when you enter them, except for a few dim lights. Igniting them will light up a portion of the room, stunning all enemies around you and giving you time to understand what you’re up against. Strategizing when to ignite the rest of the lights is all part of the fun.

Above all, West of Dead’s gameplay feels great. Tight and responsive controls give you the flexibility to go into combat guns ablazing or take a slightly more reserved approach, hiding behind cover and planning out your attacks (though you can’t spend too much time hiding, as cover will eventually break). Bullets connect with a satisfying crunch and flash of light, enhancing the impact of every shot you take. Dodging enemy fire, sliding between cover and picking off enemies one by one made me feel powerful and confident that I could survive another fight. Often, I became too cocky, and I made mistakes. But I knew I was at fault, and not the game.

The wide array of weapons feeds into the idea of flexibility as well, giving you the tools to take out your foes in whatever way works for you. If you prefer to hide and let foes come to you, the Defender is a shotgun that awards critical hits from behind cover. Or if you want to deal damage over time, the Razorshot can afflict your enemy with a bleeding status effect. Those two examples only scratch the surface of what will become available, but unlocking the best option for you might take some time.

Killing enemies in an area will randomly reward you with Iron and/or Sin, West of Dead’s two forms of currency. Iron is how you purchase guns, charms and abilities from the Trader who appears somewhere in every level. If you manage to survive the level, you’ll enter the Witch’s domain and be forced to unburden yourself of Sin before being allowed to continue. Sin is used to unlock permanent upgrades (like a health flask and improved selection of weapons at the beginning of each run) and new weapons/abilities/charms that can appear in the game. This system works well in incentivizing you to keep playing, but it takes a long time to accumulate enough Sin to unlock anything. I wouldn’t say this is necessarily a problem, it just requires a lot of patience and dedication if there’s an expensive gun that you want. 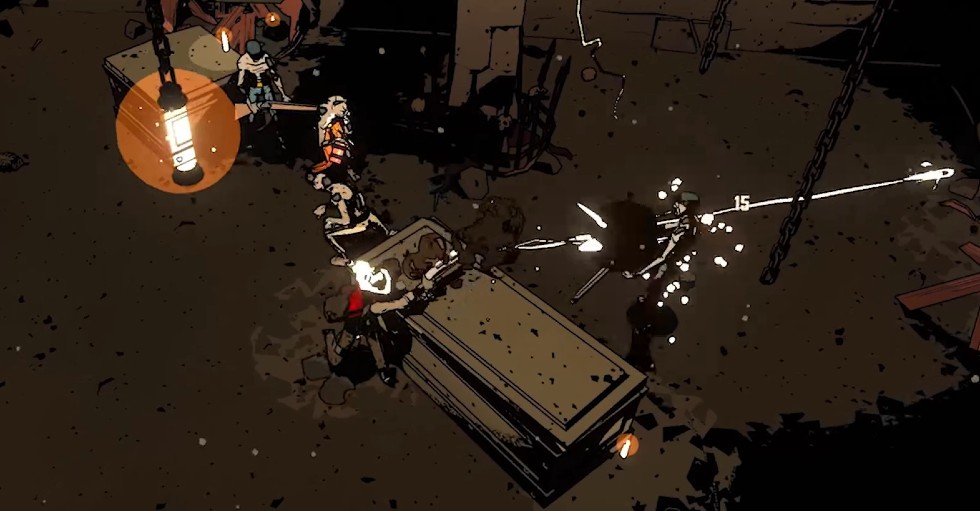 The Iron/Sin system felt very familiar to me, and I quickly realized that it was exactly like the Gold/Cells system found in Dead Cells, one of the only other roguelike games that I have played. And as soon as I noticed this, I couldn’t help but notice other comparisons between the two. Both feature runes (permanent upgrades to your character that give you abilities to access new areas), they share a similar type of inventory (two weapons, two traps/sub-weapons/abilities with cooldown timers), level to level progression is handled the same way, and they both feature protagonists with flaming heads.

West of Dead does enough to make itself unique, through the core gameplay, setting and story, so I wouldn’t say it ripped off Dead Cells. But many of the underlying mechanics are almost the same, and it was very hard for me to ignore. Of course, I’m fully aware that games take inspiration those that came before them, as is the case with all media, be it film, literature or music. The hope is that the new iterates on the old though, and I feel that West of Dead could have done a little more to make its non-combat mechanics different from its contemporary’s.

I played the game mostly in handheld mode, and it performed well, bar the rare graphical hiccup where walls would flicker for a second or two. However, I did encounter a glitch that I have not been able to resolve: one of my runes stopped working. One of the abilities you get powers up your melee attack so that it does more damage to enemies and punches through metal barriers. Somehow, I lost the ability to punch through those barriers. I know I still have the rune, because it changes the sound effect of your punch (a sound effect which is a pretty irritating stand-out in otherwise solid sound design). I thought it might have just been a one-time thing, so after I died, I found my way back to another barrier, and sure enough, I couldn’t knock it down. This path isn’t strictly necessary for progression; you can still make it to the end of the game without that ability. But it is frustrating because I was barred from content that I hadn’t had the chance to fully experience, with no way to fix it. Maybe eventually it will sort itself out, but as of this writing, it has not.

There are a few nit-picks I have, like the slow and disorganized menu of upgrades when you are unburdening your sin or the lack of progress tracking with regards to runes or memories that you’ve obtained. But these are minor blemishes, and while they could be annoying, they didn’t affect my enjoyment of the game.

I had a fun time with West of Dead; the controls felt great, and even though I compared it to another game quite a bit, I do think all of its ideas were implemented effectively. And if that isn’t enough to get you on board, then there’s its compelling story narrated by Ron Perlman. Who could say no to that?