Review: We Should Talk

We Should Talk is what I would expect to play if Netflix Originals ever got into the video game making business.

For the sake of letting you experience the game for yourself should you choose to do so, I am going to keep this review light on actual plot details or character descriptions. While this may seem a little jarring, I think it also fits quite well with my thoughts on this rather short narrative-driven experience.

We Should Talk is a game only in the sense that it gamifies social interaction and relationship building. Aside from getting to each of the conclusions, there’s no challenge or test of skill. There’s no difficulty setting present because the difficulty hinges upon choosing the right outcomes.

Unity is the engine driving this experience, but there’s very little of its resources at play here. Lending further credibility to it being like a Netflix Original, We Should Talk is made light and easily-digestible so that you keep binging episodes to explore the full experience. This is likely one of those games that you play on a lazy or rainy weekend afternoon and then discuss with a friend or loved one before uninstalling and never revisiting — unless you are into social experiment video games that challenge you to feel things you could otherwise experience during a night on the town.

The night is young

We Should Talk revolves around an unidentified female protagonist and puts you right into the action. We learn early off that you’re a regular at a hip New York City bar. And while you are normally there to cut loose, it’s an entirely new experience tonight because you are there without your girlfriend, and things aren’t exactly going great.

There’s a total of nine different endings for you to explore across four separate character progressions. Who you spend the evening in company with, And what you tell them, dictates where the night goes.

My main commentary regarding We Should Talk has to do with the spin-to-win, Mad-Libs-like dialogue mechanic. It’s smart and deeply personal in the ways it challenges you to manage what’s going on both in the bar around you and back home. However, I found through my playthroughs that it felt at times static and robotic.

I did one playthrough where I felt more concerned with what was going on back at home, so when a character in the bar demanded my full attention, I shut him down quickly, and that was that for him during this playthrough. The game plays out in 15-minute episodes, so there isn’t enough time to explore characters wholly other than to say, here’s so-and-so. Do you like them? You do?! Great, let’s get you two started on a great chat then! 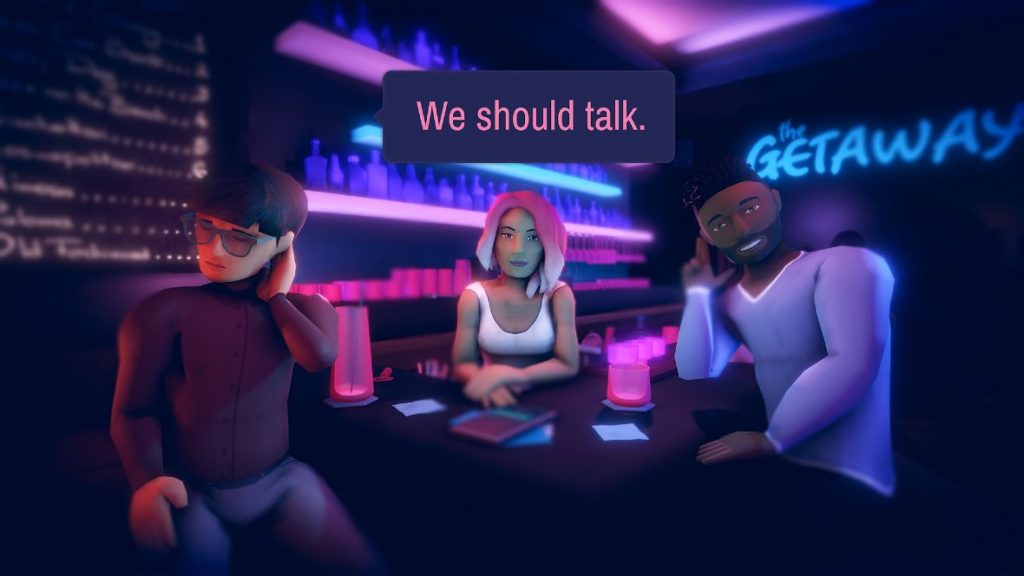 To be fair, I’ve found the game does make an effort to combat feelings of robotic by adding emotion as a part of the human equation. As you progress through conversations with bar patrons and your girlfriend back home, you’ll find that each will begin to adjust their responses, or lack thereof, to you as if to simulate anger or interest.

While the changing moods of characters attempt to screw with your thoughts and feelings, it’s tough to feel affected by this when there’s no voice acting or physical change to denote such a difference. You’re left to infer how your relationships stand by the text given to you from though bubbles associated with static character models.

I’m able to read contexts and pick up how I’m doing in each of my relationships. Yet, I often felt that I am merely pouring all my thoughts and feelings into making sure I game an algorithm with precision. Not unlike the way a robotic arm would ensure that it stuck a part in the right place during an assembly process. 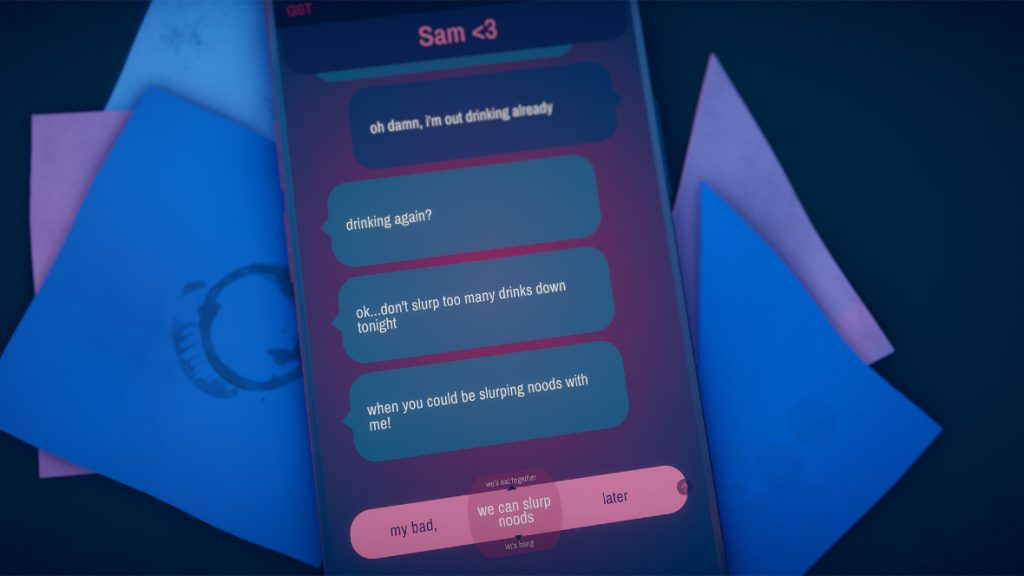 All of what I express above is not to say that We Should Talk doesn’t have moments where it achieves genuine emotion and though. While I’m not a fan of the way ending conversations made me feel, I ran through one particularly interesting playthrough where I focused the narrative upon myself and found I had less and less to say to everybody. When I reached the ending, I learn that I’d left things off in a pretty nasty state, but that I had focused on my life and opened myself up to the future. I enjoy how this ending has stuck with me because it feels horrible, but it’s also quite freeing.

The atmosphere is key here

Let’s talk about something I enjoy: the atmosphere. While I mentioned that the Unity-devised “The Getaway” bar is stark, it does work as a sort of character itself. Through its muddy nightcore soundtrack and indiscernible chatter from a seemingly hip and happening crowd, it moves the overall experience forward.

I’ve spent more time in New York bars and clubs than I ever cared to — which is a condescending way to say that I’ve seen the types of tropes that feed Netflix Originals and cities that never sleep. What you’ll encounter in We Should Talk can drink with the best of them. Characters are the types you’ll find in a Chelsea nightclub, or amongst the students in Greenwich Village. 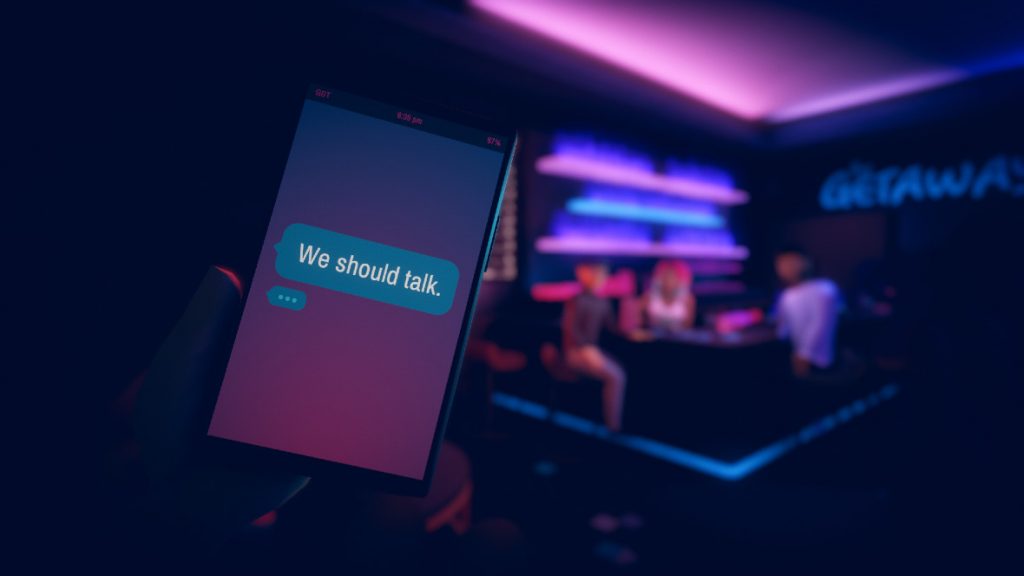 “The Getaway” is undoubtedly a moniker intended to elicit the feeling that you a person in need of an escape from life. Everything from people you meet, the music in the background and even the text fool around with the idea that you’re in a New York bar to deal with where you are in life.

We Should Talk’s minimalist setting and vague characters are precisely what locks down the experience you have here.  It’s a point where this small developer team really shines in an experience where I have to say that things currently fall flat at times.

Complementary to the times

We Should Talk takes place in an environment that is missing during the COVID-19 pandemic. Bars and nightclubs have only recently reopened here in Toronto — many are still closed. And what the closures during the epidemic have done is bring the lights up on who we are in the darkness.

It’s evident in every corner of this game that our protagonist is an avid patron. Without “The Getaway,” I’m willing to bet that this protagonist’s story would play out extremely different.  Over this past year, I think we’ve seen how people deal without having coping mechanisms like a nightlife. 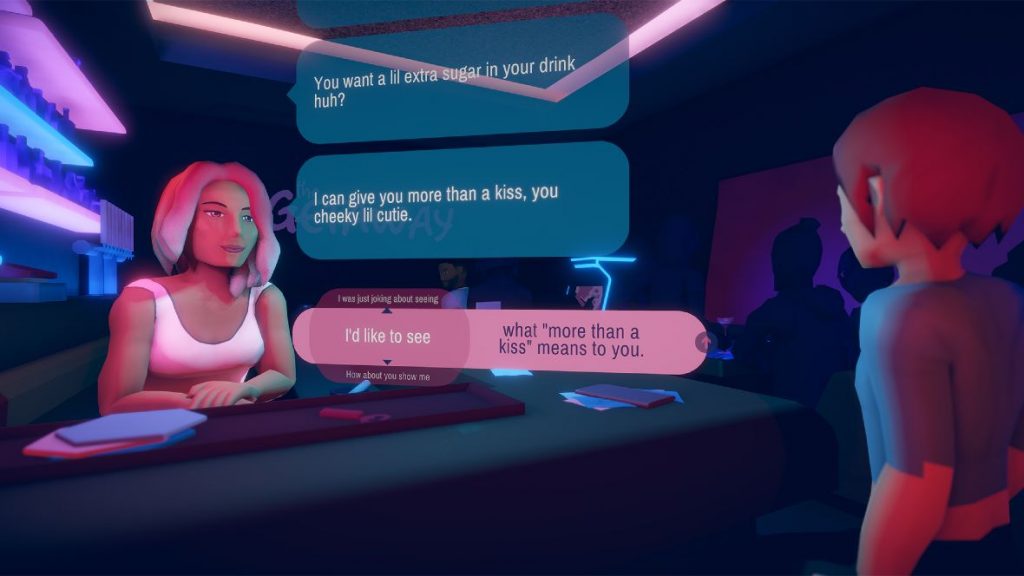 Perhaps I’m not meshing with We Should Talk because a club life is not something I’ve ever cared much to have. I find escape and relaxation in meetups with my friends and acquaintances in the gaming community. COVID has shown me that I haven’t always been so good at participating in them and in making the most of them. And that’s something that I plan on getting much better at as life continues to move forward.

I’m sure I am not alone in feeling alone this year. It’s been a horrible feeling missing genuine connection and communication with people. I want to make every attempt and take every opportunity going forward to make sure I never feel so isolated again.

I believe this is where the takeaway in We Should Talk is. The game’s title is a line that will show up in every playthrough you take regardless of what you do. It’s a theme that perhaps resonates clearer this year than it ever has or ever may again.

It’s hard to review this as being a game seeing as it’s more a social experiment based upon a game mechanic. So simply take this as commentary from someone who has spent the better part of a morning coffee session binging the subject matter.

We Should Talk is not a Netflix Original, but it’s as close as a game can come to a binge-able social commentary, the likes of which the company would produce. This isn’t likely going to be an experience for everyone, but it offers one that straddles pop culture and real-life enough to provide a strong commentary inviting us to do what its name suggests.

We Should Talk is available on all major consoles as well as PC.