I’ll hand it to Funktronic Labs. Wave Break is a Miami Vice-soaked, synthwave-soaked and just plain Unity-engine-water-physics-soaked skateBOTING game I had no clue I needed!

And while I wasn’t sure I was a fan of its frankly creatively unmatched brand of out-there arcadey, it’s managed to stay with me over this week in a way that’s proved it worthy of hanging around.

Wave Break takes the central portion of its inspiration from the early arcade stylings of Tony Hawk’s Pro Skater — you know, just in an 80’s-themed speedboat. 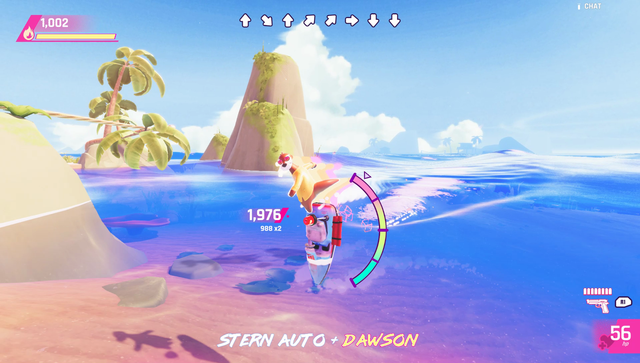 There’s a campaign mode that will see you tasked with completing a laundry list of objectives like scoring a set amount of points, executing specific tricks over certain park fixtures and performing tricks requested by other playable characters. Sothose who have played arcade skaters will be right at home!

I’m gunning for ya

Wave Break gives you four cutely deviant playable characters who, similar to its inspiration material, come with differing stats and specializations. But also come with the ability to be upgraded to suit your style both visually and performance-wise as you progress through runs.

There’s a very brief yet overly violent and nefarious story that helps to build out the game’s five main parks. Rather wildly, it involves a Scarface-meets-skateboarding narrative that is about drug running and gunning for your fellow cuddly creature. It’s wild, but it honestly takes up very little of the overall experience as the arcade skateboarding is really the focus here. 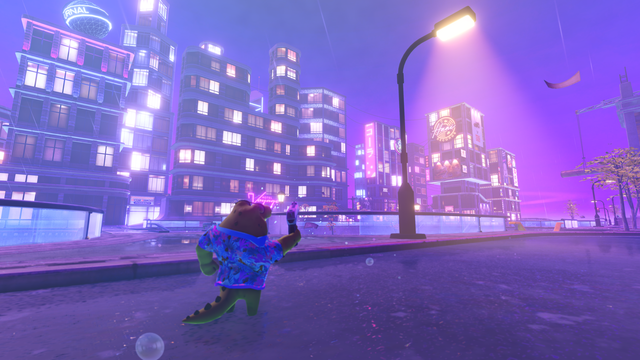 I was quite concerned that having a game be both arcade skater and the third-person shooter would be horribly unbalanced. However, Funktronic makes it work with the sort of attention to detail a professional skater like Tony Hawk or a professional — and not real — shooter like Max Payne would have.

The second you toggle the aiming mode for shooting, you are greeted with bullet time. This ability to slow time is useful not only for shooting but also for keeping up your trick lines.

There’s a glaring problem to be found in the fact that Wave Break demands precision of you, which is fine! But in order to do so, a game has to have tight controls and intuitive gameplay. And it’s here where Wave Break begins to… well, it begins to break down. 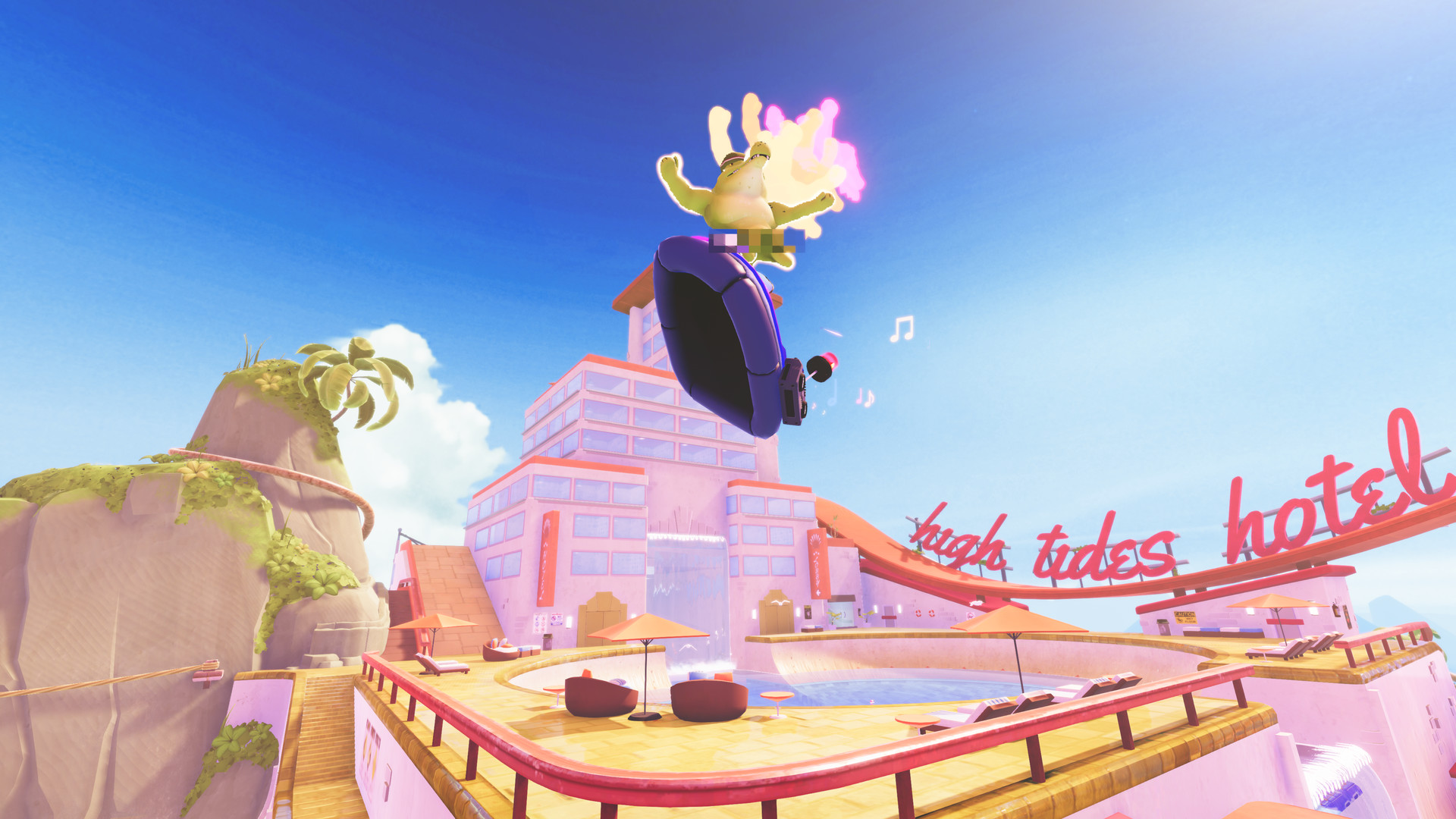 You’ll often find that your boat collides frequently with things like ramps and walls, causing you to lose a lot of your trick lines and combos.

There are also large portions of levels that take you out of the water and onto city streets or ice. During these sections, control begins to feel like something you had once and lust to have once more.

Lack of control becomes even more apparent and taxing as you grind it out and update your stats because your character will begin to become imbalanced as you hit the gym to improve your character’s stats. 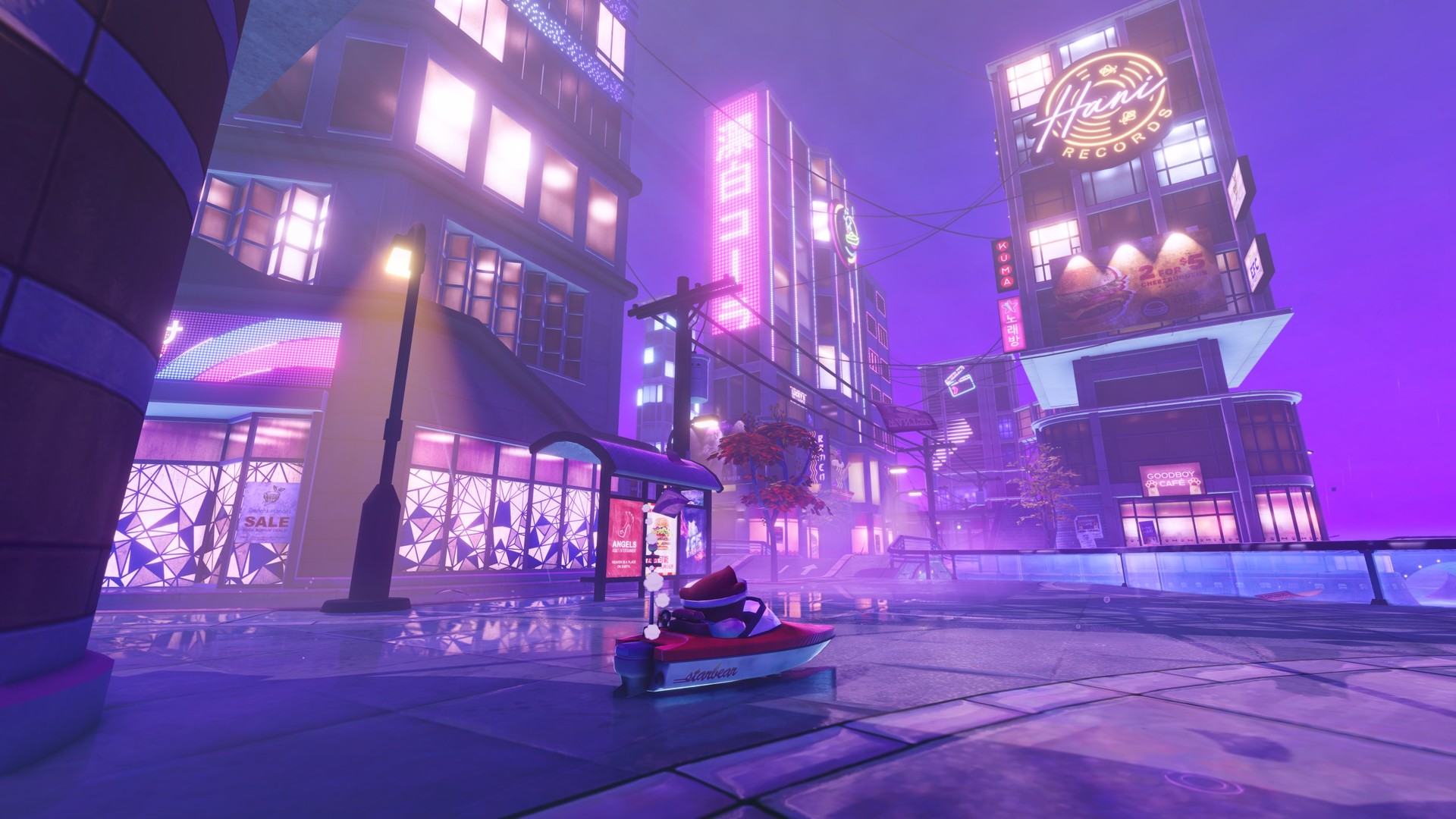 I have a glaring issue with the fact that there isn’t the ability to purchase skills, test them out and then re-skill yourself because I feel as though that would be a great benefit to completing tasks on the list and eliminating some of the need for grind after grind — especially when the campaign locks you into using a specific character!

Now, I am willing to accept the criticism that I should be mindful of how I am spending my money on skills in a way that sees me become effective, but it doesn’t need to be this way! The ability to reroll my skill point would be greatly appreciated in a future patch.

Now let’s get to what Wave Break does oh so well.

The first thing that I demand when I hear that a game, show or movie takes inspiration from Miami Vice stylings, expect it to have a killer synthwave album that instantly hits hard. Wave Break’s OST does not disappoint with original tracks by Kalax, Timecop1983, Droid Bishop, Morgan Willis and Lost Years. It’s a soundtrack that you can fully customize to suit your shredding. It’s full of bass-thumping lows, and crisp highs that I can guarantee were created to be songs you’d traditionally skate to, but they each work for doing so in their own ways. 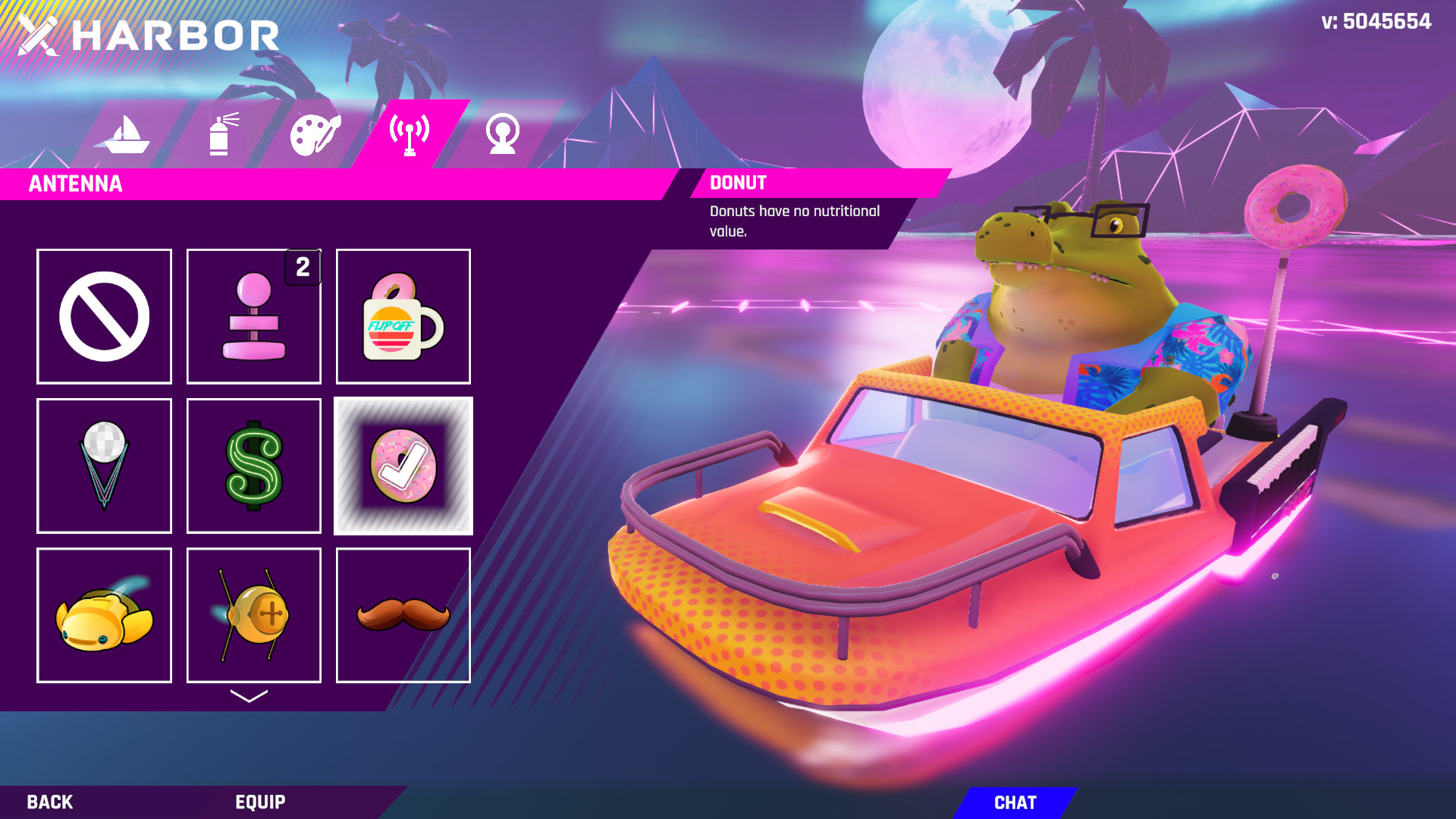 I found myself needing to fall into a loop to avoid getting upset with how many times I was falling off of my lines. So I threw “Crystal Waves” by Kalax — which does not need to go this hard — on repeat and found myself suitably looped into the overall experience.

To its credit, Wave Break excels at providing a fantastic custom course designer that allows you to keep yourself tricking, challenge friends and even try to sink people you’ve never met via the worldwide wave [web]! 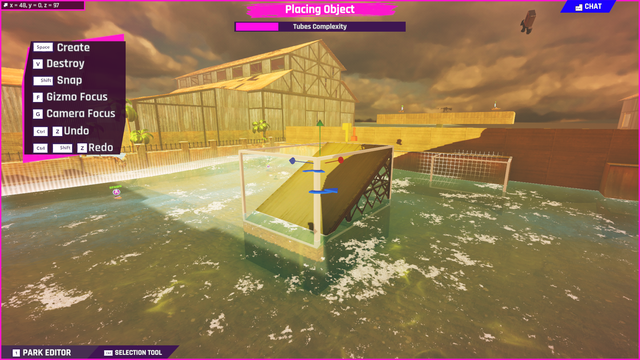 This personally is where I see the most value in the $30 you’ll be throwing overboard for this game.

While I’m still not super stoked on the overly demanding controls or low tolerance for imperfection, having the ability to just motor into someone’s personal park and throw down some lines is thrilling.

There’s also a battle mode of sorts that puts you in an arena with four other players and provides endless challenge and entertainment as you attempt to land the highest score. I imagine both modes add some serious replay value.

Funktronic Labs has hooked me for a while longer with the uniquely lovable little passion project. I really wish there were a way to re-skill my riders, and I feel like the physics of skateBOATing can be harshly unforgiving at times, but it’s moved me.

Perhaps this experience is meant to be more of a slow crawl to keep me interested and less of a wave to rush right over me?

Wave Break is available on Steam and on Switch.