We’ve hit a point where if you’re looking for something new to play and want a retro aesthetic, it’s a simple Google search away. These days indie developers are filling the void, one which larger developers have moved away from, but one that many still wish to be available. It shouldn’t come as a surprise that the indie scene is where a lot of exciting games are being produced, giving you the freedom to pick and choose what you want when you want it.

If a robot samurai fighting a totalitarian state is something you’ve been craving then look no further, as Vengeful Guardian: Moonrider, the new platform action game from Joymasher, brings the best elements of classics like Shinobi and Mega Man. Even the title feels like something from a bygone era, providing tough-as-bricks gameplay.

The story begins when the generals of Penrai decide to turn on the Moonrider, a robotic warrior created to help maintain order and the state’s oppression of its citizens. Fortunately, this plan goes wrong as the protagonist decides to rebel against his creators to bring peace and justice. 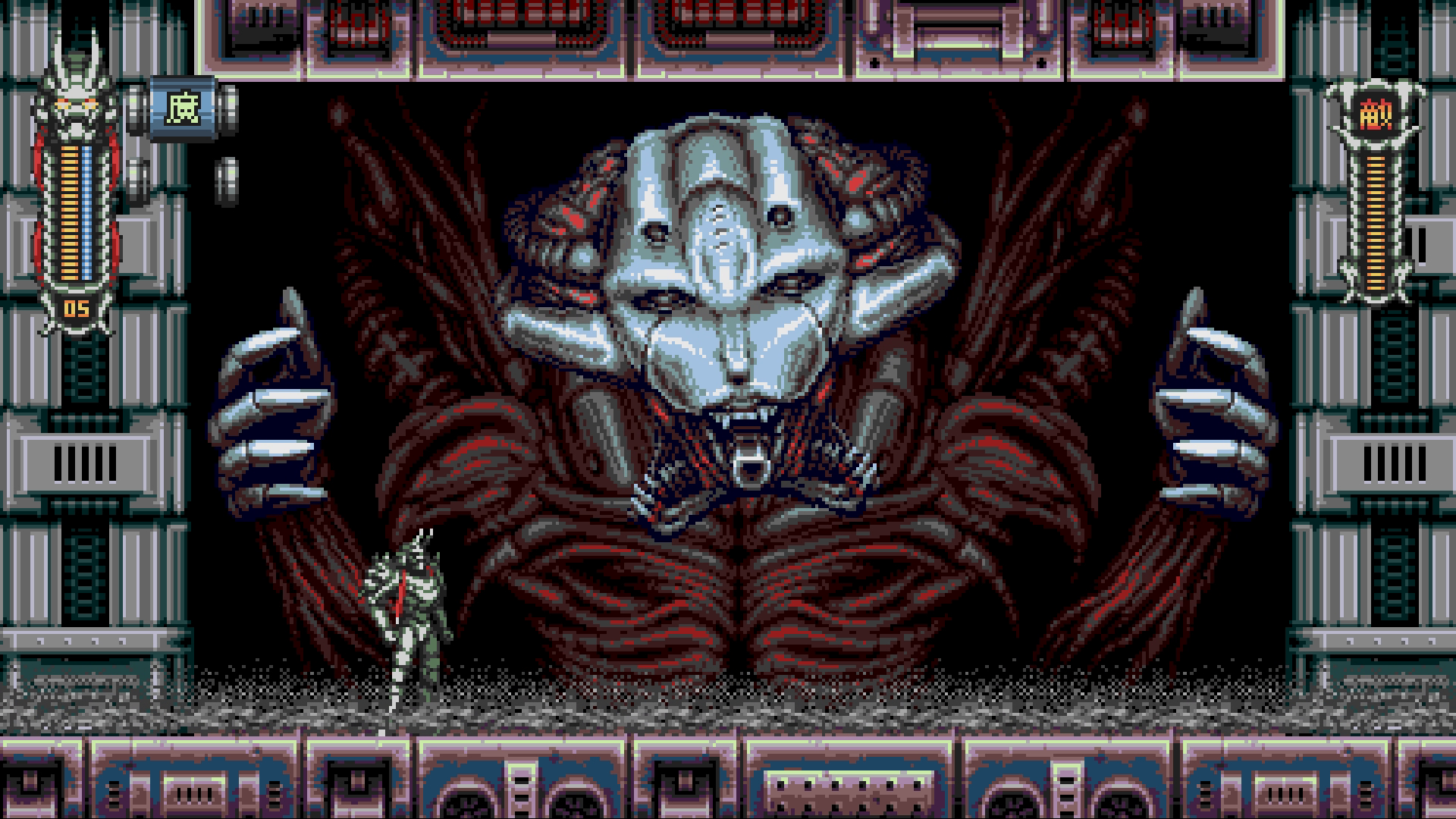 Vengeful Guardian: Moonrider shares similarities with the studio’s previous game, Blazing Chrome, starting with its simple 90’s scenario in which it’s still about humanity in danger and machines. After an attack, or at least that’s how it’s presented to us, a totalitarian state builds mechanical super-soldiers looking like ninjas. A seemingly well-oiled plan that turns into a fiasco for the authoritarian regime. One of the sentinels, the Moonrider, realizes upon awakening the true nature of its creators and sets out to decimate them all. All of them, including the other bipedal weapons of war created, will be killed.

Apart from the first level, which is not easy but is more of an introduction, the following levels can be played in any order you like. All of them usually consist of horizontal and vertical platforming sections in which you encounter traps and enemies. 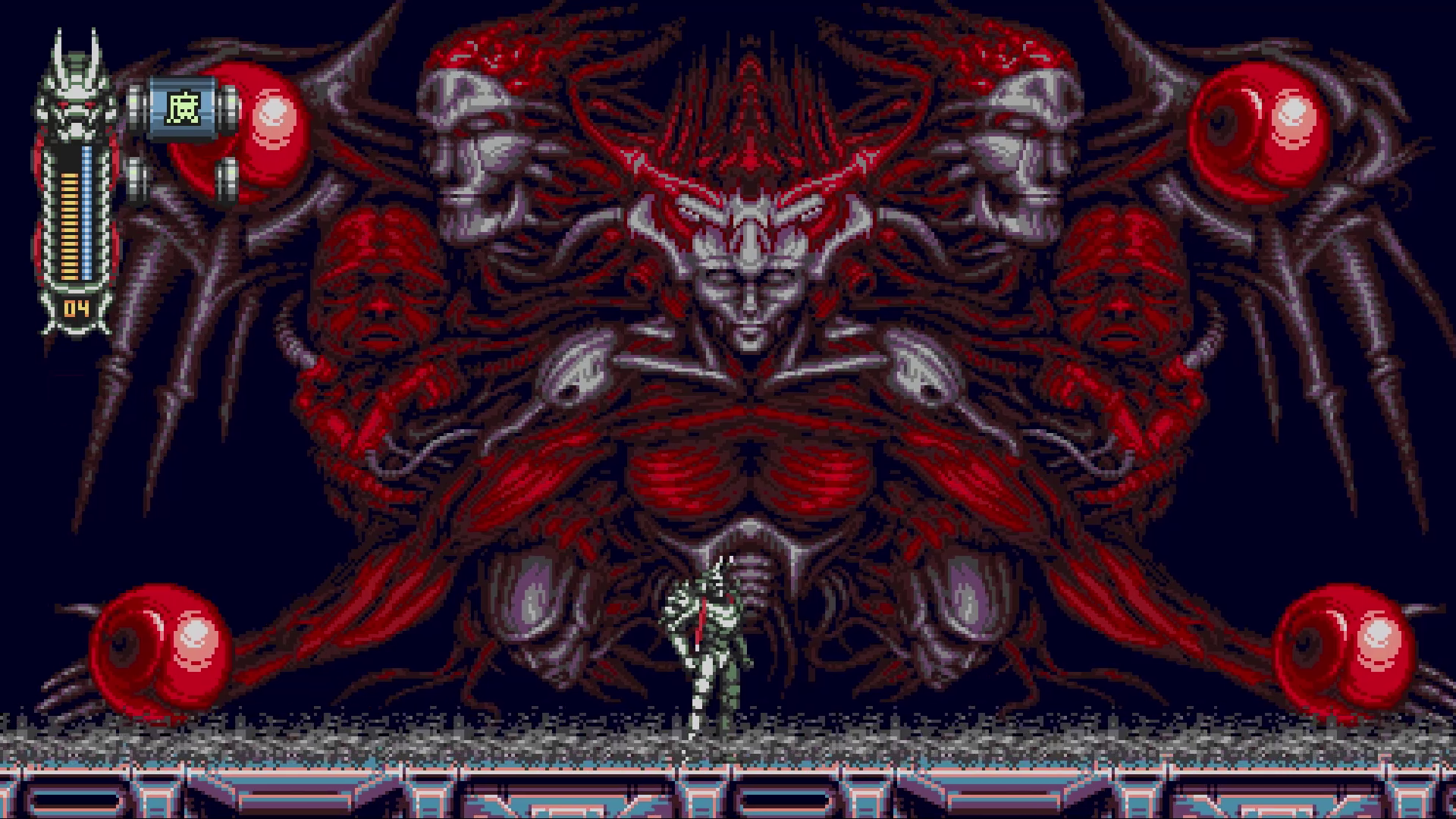 Moonrider can jump, throw a normal sword and an attack from the air, as well as a special blow that consumes a portion of a blue energy bar. While this is by default a more powerful version of the normal lunge, it can be changed to other attacks if you get the corresponding upgrades by defeating bosses. So, you might opt for a less damaging tornado that attacks from a distance, or for shuriken that spins around us until you throw them, for example. These attacks are often hot-swappable, meaning you can switch things up wherever you are.

Vengeful Guardian: Moonrider is a difficult but fair experience

I was not expecting to be challenged from the start but I was impressed that Vengeful Guardian: Moonrider offers a good challenge for those worried about coating through to the end. Many in-game sections call for you to be precise, especially when attempting to complete the platforming sections and the action areas require you to be precise and patient in waiting for the right moment to strike. 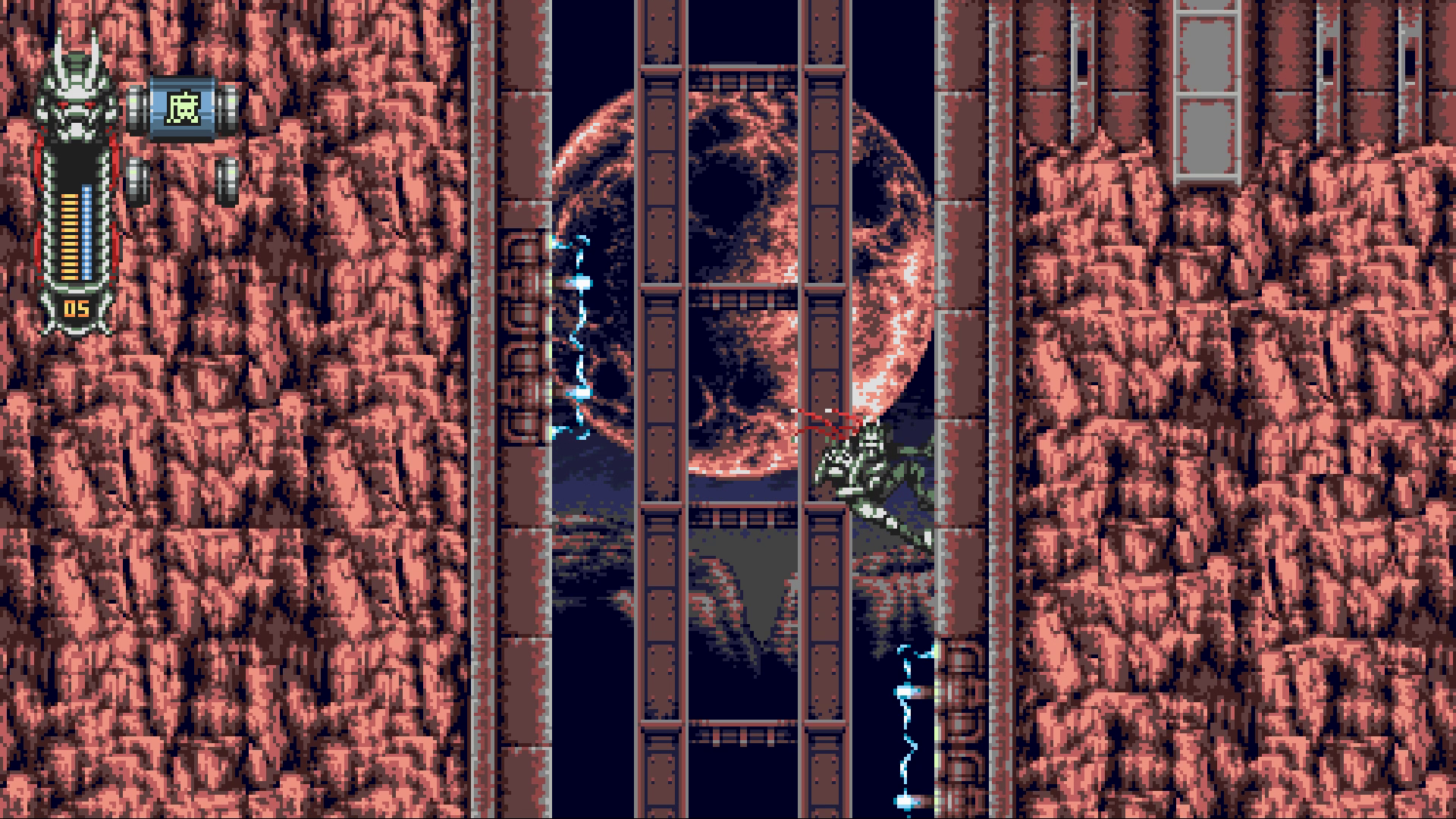 Many times, you’ll have to memorize and assimilate patterns to act effectively or you’ll lose some of your lives. Still, the game feels challenging, but not unfair. On the contrary, it tends to spur us on to keep trying.

Vengeful Guardian: Moonrider wants you to always be running and encourages you to do this in several ways. Enemy attacks are slow and even when you encounter a new enemy it’s not hard to dodge. Your dash attack is much stronger than the combo performed when you are standing still, killing most enemies with one hit.

Also, most of the projectiles can be destroyed or knocked back with sword attacks. All of this allows a player with good reactions to get through the stages easily and quickly, with almost no need to release the run button. 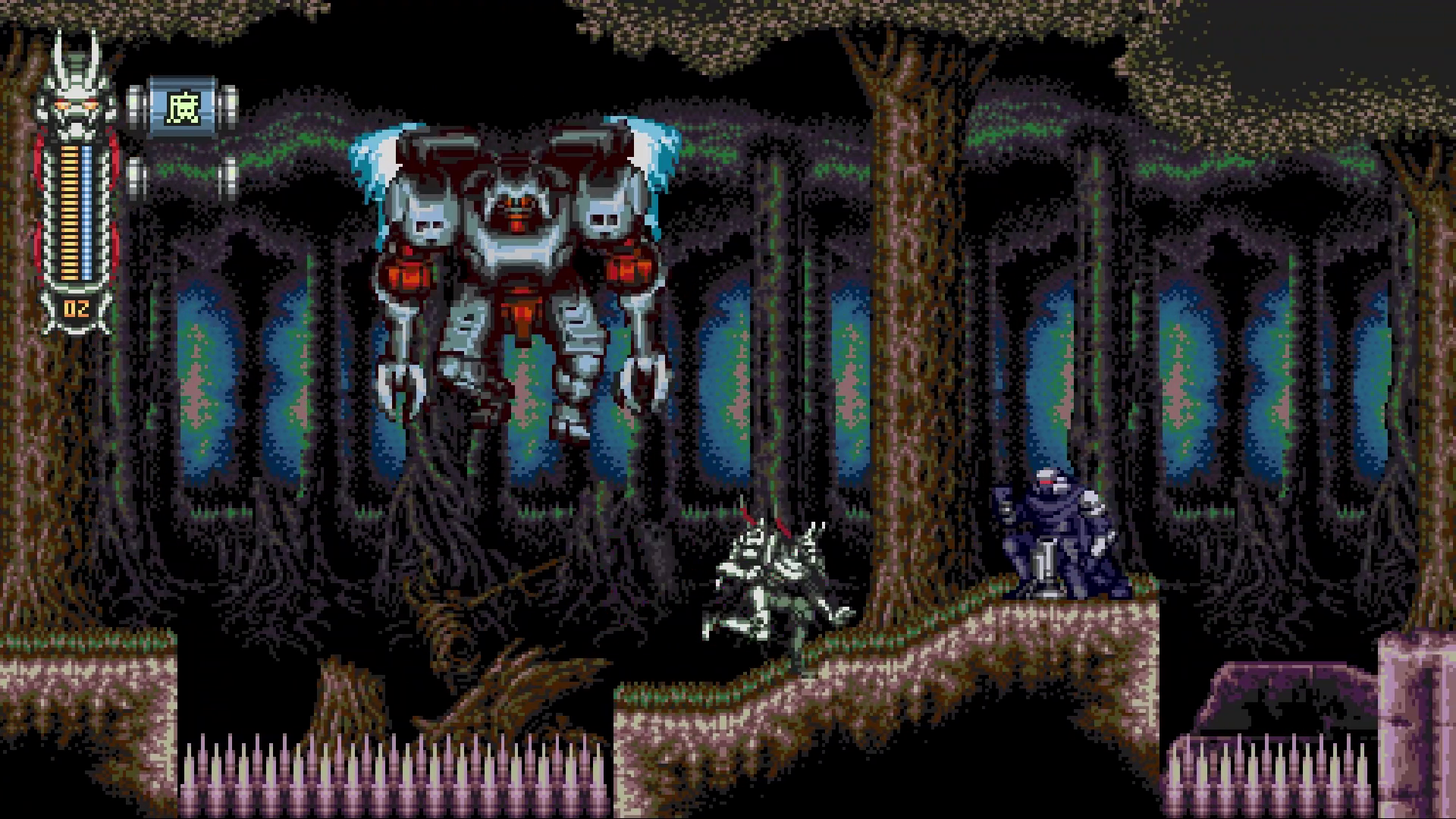 Apart from the first level, which serves as a tutorial more or less, the following levels can be played in any order you like. All of them usually consist of horizontal and vertical platforming sections and are pretty great displays of precision and patience.

The level design, in general, is very linear, precisely to allow the player to maintain a certain pacing level. However, each stage has a mechanic that matches the elemental power of the area’s Guardian, and some introduce variety with timed platform challenges, water mazes and vehicle stages.

One point that can be divisive is the difficulty. The game starts each stage with three lives and infinite continues, and each area of the stage completed marks a checkpoint. However, even when you run out of all your lives you still start over from the last checkpoint, which makes hitting game over practically negligible. The positioning of the chips is also pretty obvious, it’s not necessarily easy to get to them, but the paths that designate them are easy to figure out. And since it places a lot of value on reaction, the game can become extremely easy for players who are familiar with the style. 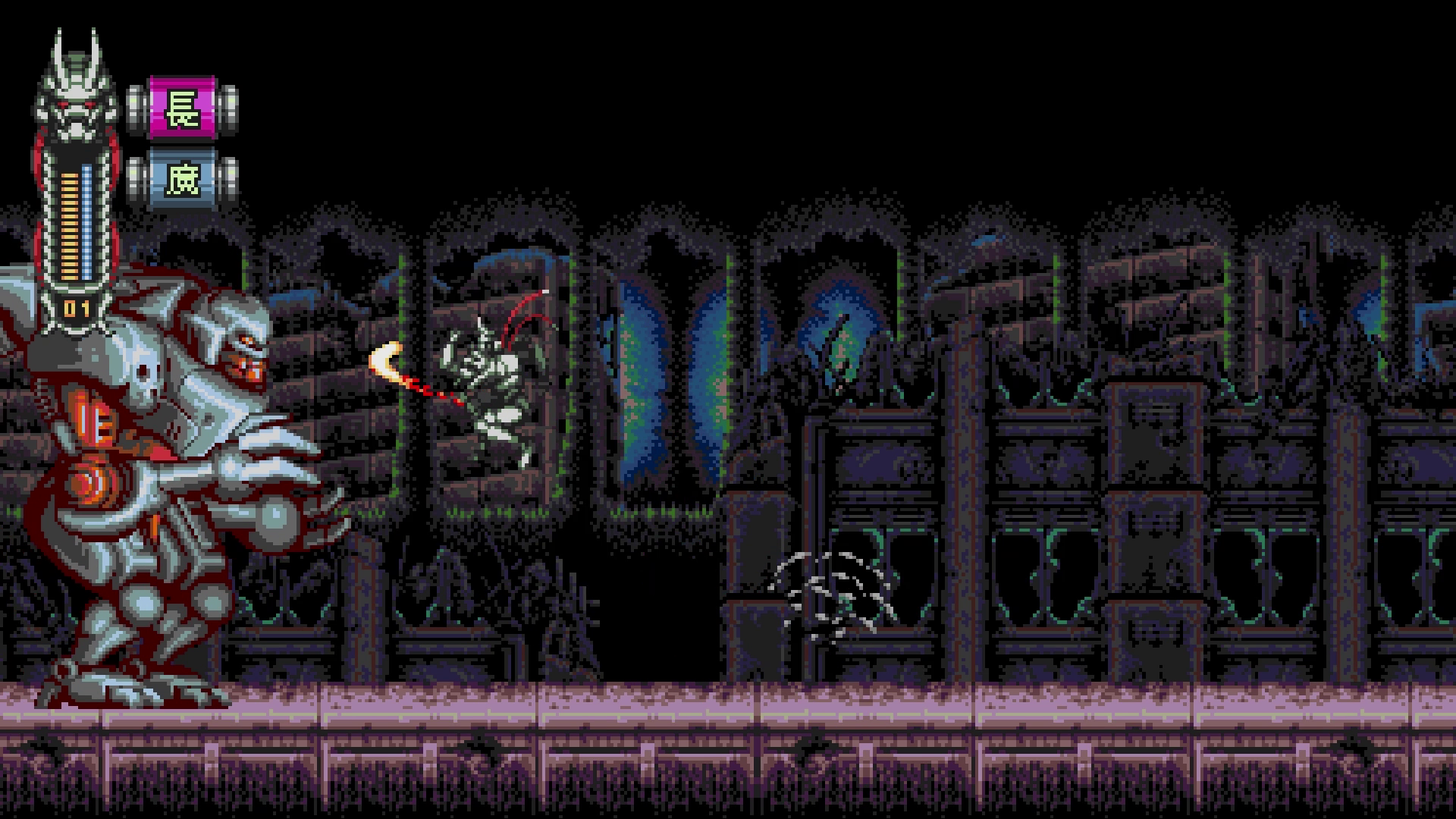 This is a point that in itself is not good or bad; more purist fans may be disappointed with these mechanics that make the game easier, even when compared to the other games from the developer but this can greatly improve the experience of new players. Remember that as one of the focuses of the game is speedrunning, it may be easy to pass the stages but it is not easy to get the best ranks and best times.

In addition, there are enhancement chips hidden in the stages, which grant passive buffs such as energy regeneration, increased range in attacks and lower damage from enemies’ attacks. Moonrider can equip up to two chips at a time, which introduces some strategy with regard to which combination is best for each stage. 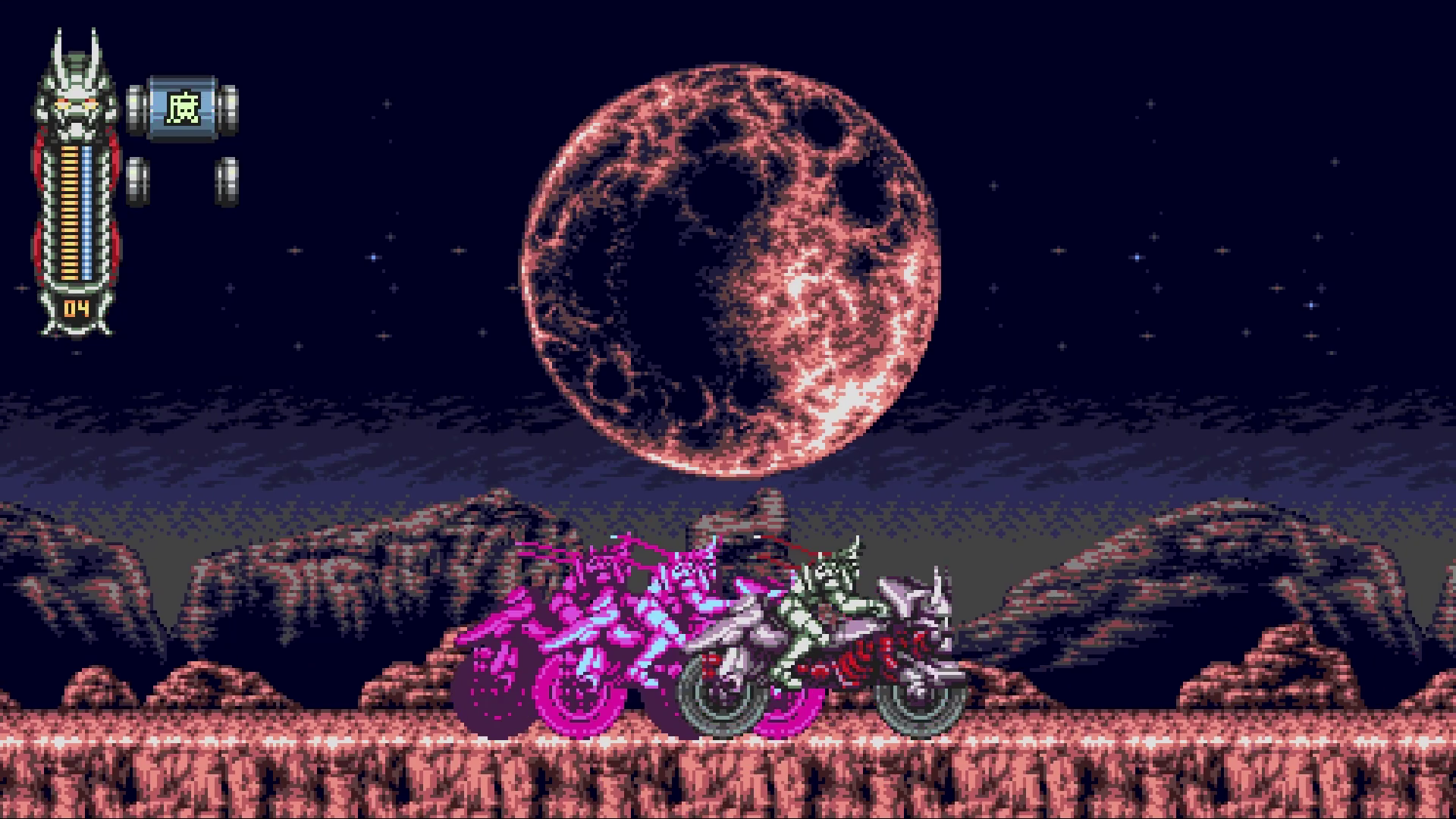 Vengeful Guardian: Moonrider feels like a blast from the past and kicks off the year with a challenging and rewarding experience. Between the combat, enemy choices, and level design, I feel like I’m revisiting the same games I played in my childhood. Sure, there’s not much else once you finish but JoyMasher is excellent at what they do and this trend continues with Vengeful Guardian: Moonrider‘s tight controls and excellent action.

Recommended
Liked
Excellent and exciting gameplay and traversal mechanics
A blast from the past in the present with some great visuals and audio choices
Didn't Like
A bit on the short side, finished in about three hours
No extra content post-game
Related