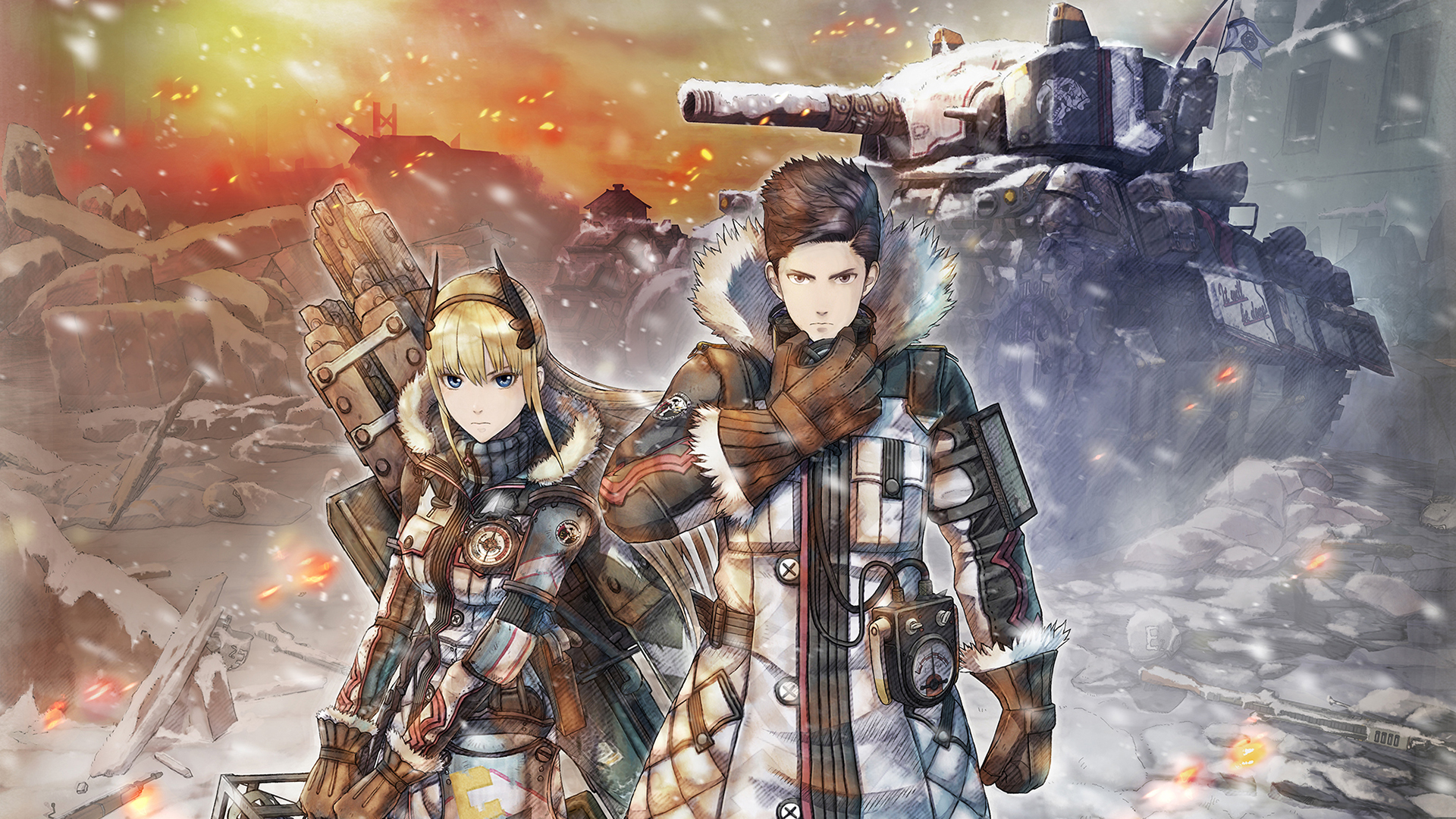 It has been ten years since the original release of Valkyria Chronicles on PlayStation 3, which was widely received, and only a year since the experimental spin-off Valkyria Revolution that was not favoured by most critics. Preparation for the development of Valkyria Chronicles 4 started with the remaster of the original release on PlayStation 4 to let players relive cherished moments and to ignite a spark of excitement across the community for its upcoming release. Let us take a look to see if this excitement holds true, or whether the spark loses intensity.

Valkyria Chronicles 4 takes place in the same time frame as the original title where the Atlantic Federation forces are fighting against the Eastern Imperial Alliance in the Second Europan War. However, this iteration focuses on the exploits of Claude Wallace, who is eager to prove himself as a capable leader on the battlefield alongside his trusted combatants of Squad E. His squad is composed of several childhood friends who joined the army together with the eventual hope of creating peaceful world. With success uncertain, the Atlantic Federation conceives Operation Northern Cross, a last effort to push through enemies lines and capture the Imperial capital. It is through a tightly knit bond of camaraderie that Squad E is able to persevere through overwhelming odds, freezing temperatures, and the likelihood of never returning home. The entirety of Valkyria Chronicles 4 falls into either Book Mode, where the retelling of events leading up to engagements takes place, and Command Mode, where the player is put in control of Squad E to maneuver them through the complexities of combat and seek out objectives to attain victory in battle. Once unlocked, visiting your Headquarters will give you the ability to upgrade weapons, classes, and to select character loadouts and a roster from the squad to be deployed in battle. This is done with in-game currency and experience points that are awarded for every victory. Players are also able to take part in Skirmishes to acquire additional experience and currency when they are having difficulty completing a certain mission.

The widely received hand-drawn visual style returns in Valkyria Chronicles 4 with an intensity that contrasts the colour palette from beginning to end. Your journey will take you across various locations such as picturesque countryside landscapes, war-torn fields, and snow covered mountainous terrain. These locations perfectly illustrate the watercolour compositions which creates a charming representation for a tragic event such as a world war. Every unit’s movement and attack leaves your own personal mark on an ever changing canvas placed before you by the creative minds at Sega. The artistic presentation coupled with the soundtrack by the original composer of the Valkyria Chronicles series offers a great experience.

Your time spent on a battlefield revolves around the careful utilization of Command Points (CP) and Action Points (AP). You have a limited amount of CP per round and each point refers to a single action that can be taken on the battlefield, but units can also be selected more than once per turn. Any CP that is not utilized will carry forward to the next round, so it can be beneficial to save CP points when planning an all-out offensive. Once a unit is selected, the camera will shift from overlooking the entire map to a third-person view of the character or vehicle. A bar represents the current AP available for every unit which varies in amount by each specific class. There are also Commands you can issue on the battlefield that use CP and offer healing, increased defense, radar, and even an artillery bombardment. Specific leaders can also use a Team-Up Command that lets them have followers move alongside them. This is a great feature that lets you move slower units over great distance while expending minimal CP.

The classes within Valkyria Chronicles 4 are the Scout, Shocktrooper, Sniper, Engineer, Lancer, and Grenadier. Each class has their own advantages and disadvantages in combat, so maintaining a diverse roster when deploying will aid in tackling any threat that awaits. However, the Lancer was rarely deployed during my experience as a heavy reliance on the Hafen tank was able to eliminate opposing heavy armour. Engineers and Grenadiers are the most essential units to deploy as they can quickly alter the tides of war in your favour. Having an Engineer cycle between units replenishing ammunition, repairing sandbags for cover, and repairing vehicles when suffering direct hits while Grenadiers can remove threats from a safe distance, paving a path for your force to move forward and complete the mission. Every mission within Valkyria Chronicles 4 presents you with victory conditions that vary from capturing enemy camps, arriving at a desired location, or removing the enemy threat, within the desired time frame. There are also numerous memorable moments that occurred during each mission that heightened the excitement of the overall experience. One such moment occurred within Chapter 4 when an enemy battalion of tanks appeared on the battlefield and my only thought was of the impending defeat. However, the next turn granted you an allied tank reinforcement squad of your own to combat the new threat. Combat difficulty increased as the story progressed, but enemy units would lose common sense at times as they rush with determination towards your tank to quickly be defeated by interception fire.

These locations perfectly illustrate the watercolour compositions which creates a charming representation for a tragic event such as a world war.

The strategic turn-based experience that Valkyria Chronicles 4 offers shares many similarities with a game as chess as you constantly need to outsmart your opponent by thinking three moves ahead at any given time to avoid being outmaneuvered. Players will also have to factor in elemental conditions as certain maps are either fought at night or during blizzards that offer minimal visibility. Traversing snow covered mountainous regions also pose the risk of avalanches, so it is best to steer clear once being notified of the impending threat. Utilize the advantage of occupying higher grounds to identify the environment and provide a vantage point over the opposing force. Maintaining and avoiding line of sight plays a pivotal role in combat as you are never safe in the open on the battlefield. Snipers can be perched in towers or crawling in tall grass while pillboxes, Grenadiers, and tanks can quickly ruin a strategic approach if you come within their targeted line of sight. It is best to maximize your tactical advantage by flanking enemy positions. Another great aspect I experienced was recognizing and learning from my own failures as scripted events led to enemy reinforcements arriving in undefended areas that wreaked havoc on my entire force. Such events also presented a significantly more rewarding experience as each victory was earned through the toils of war. Valkyria Chronicles 4 succeeds at building upon the strengths of the original release. The turn-based strategic combat, impressive visuals, captivating story, and addictive gameplay are the main aspects that perfect this gameplay experience. A future release in the franchise may wish to explore the ideas of incorporating an online element where players will be able to create and customize squad members to their liking before taking them into combat against opponents from around the world. Valkyria Chronicles 4 comes highly recommended as it offers a memorable experience that should not be missed.