Until Dawn has been my surprise of the summer. The barren wasteland of releases during this time period can be a massive downer for gamers. Luckily, Supermassive Games has closed off the month of August with their highly ambitious and refreshing take on survival horror games.

“When eight friends become trapped on a remote mountain getaway, it falls on you, the player, to make snap decisions that will determine who survives Until Dawn. Every choice you make in your terrifying search for answers – even the seemingly trivial ones – will carve out your own unique story. And remember, there is only one save file for each playthrough so you can’t go back and change your decisions!” The description provided sums out the experience exactly as described and boy, what a thrill the experience really was. Until Dawn is definitely one of the most innovative, interesting, deep and frightening survival horror experiences I’ve had the pleasure of playing.

To get this comparison out of the way, yes there are similar elements found in Heavy Rain with the QTE prompts and way to the player interacts with the environment, that being said, this design decision makes sense in regards to the story being told. This works and the comparison is just that, a comparison. Until Dawn is vastly different in most regards. I haven’t followed the trail of promotion this title was being given (nor has it been heavily marketed from Sony, like, at all) aside from what I would end up posting on Console Creatures.  I’m glad I kept my distance and allowing myself to not know too much about it going in to be honest because this level or knowledge about Until Dawn made me enjoy it that much more.

My initial playthrough clocked in at 8 and half hours with a ton of exploring trying to collect all I could. My second playthrough has been at a steady six hours and yet I want more of this world, I need to learn everything I can because I feel so drawn to what’s hidden here.

Until Dawn runs on a modified version of Umbra 3 which also powered launch title Killzone: Shadow Fall in 2013. This modified engine is beautiful and oozes detail though the scenery, atmosphere and character models. Everyone in the group looks and feels real, the cabin and surrounding area are creepy as can be and just about everything else has a high level of polish to it. Speaking of the characters, each one of these people really come into their own and shine, starting out a cliché from a horror movie and completely surpassing any expectation I had in regards to their development.

The main cast is great all around and Peter Storemare plays a secondary role as Dr. Hill, a psychiatrist who breaks up the pacing between chapters. While he questions your fears and your thinking patterns, add little to the story aside from the beginning chapters.

Supermassive’s Butterfly Effect system is crazy, and it works, this is a game where the choices I pick have a serious repercussion that I can’t go back on because I didn’t like the outcome. The decisions made will echo right until the end, be it small or big, the decisions are yours to make your life easier in the game.

Until Dawn succeeds as a horror game, time and time again I found myself jumping scared from my seat. The story itself is far more ambitious than what I thought it was going to be and really took a turn upwards after the full picture came into play. The scare tactic in each chapter really did a number on me late at night with my headphones plugged in and no one around. The death sequences encountered are detailed and vomit-inducing, and I wouldn’t want them any other way. The urgency of the events that lead to these sequences makes the deaths that much worse when you know you could have prevented the death had you gone left instead of right or followed the footsteps instead of the sounds. The chilling world you inhabit has no room for mistakes and you’ll learn that quickly or perish like your friends.

If you’re like me or just about anyone else who has seen a horror movie at one point or another and have reacted like madman screaming advice at the TV, then Until Dawn is right up your alley. Only this time, you’re actively controlling their actions. You can act out the scenario of a psycho chasing you with a level head and proper tools with a touch of a button. Jason Graves helms the soundtrack for Until Dawn, and his experience with franchises like Dead Space, The Order: 1886, Fear and Tomb Raider make his style of composing fit like a glove. The man knows how to work an atmosphere and make the hairs on anyone’s neck chill with a sense of being uncomfortable.

The tense and pulsating soundtrack work in tandem with the atmosphere set by Supermassive Games to offer a stunning setting. The use of camera angles is some of the best I’ve seen, adding a seemingly creepy level to otherwise normal rooms.

Until Dawn adds layer upon layer as the episode count goes up and does a surprisingly excellent job of keeping the momentum going until the end. The ending works, but I felt so much tension and build up to those final moments for the game to just end. I don’t necessarily hate it, but I felt some more closure was needed after everything I had witnessed. Until Dawn is one of the best gems of this generation thus far. Coming off my first playthrough I knew Supermassive Games had a winner on their hands. Initially a PlayStation3 Move game and numerous design changes and delays leading to a longer development cycle I think worked in favour of everything. There isn’t anything out there right now in the entertainment world like Until Dawn. The world and atmosphere will pull you in and keep you on the edge of your seat until the credits roll, jump scares be damned, this title is the perfect way to end the summer. 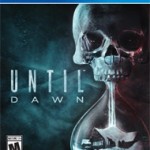