One of the most tedious, time-consuming, and exhausting things we all have to do at least a few times in our lives, is moving. The boxes, the tape, the loading and unloading, the list goes on. What Unpacking does is not only make one aspect of that calming, it also brings you into an unexpectedly sweet story without speaking a single word or displaying dialogue on screen.

I’m now in my mid-30’s. Us “Millenial” kids born between 1981 and 1995 may not always be everyone’s cup of tea, but the vast majority of us are now adults with partners, families, and life-long friends. I say all this to preface who I feel Unpacking and developers Witch Beam are speaking to. 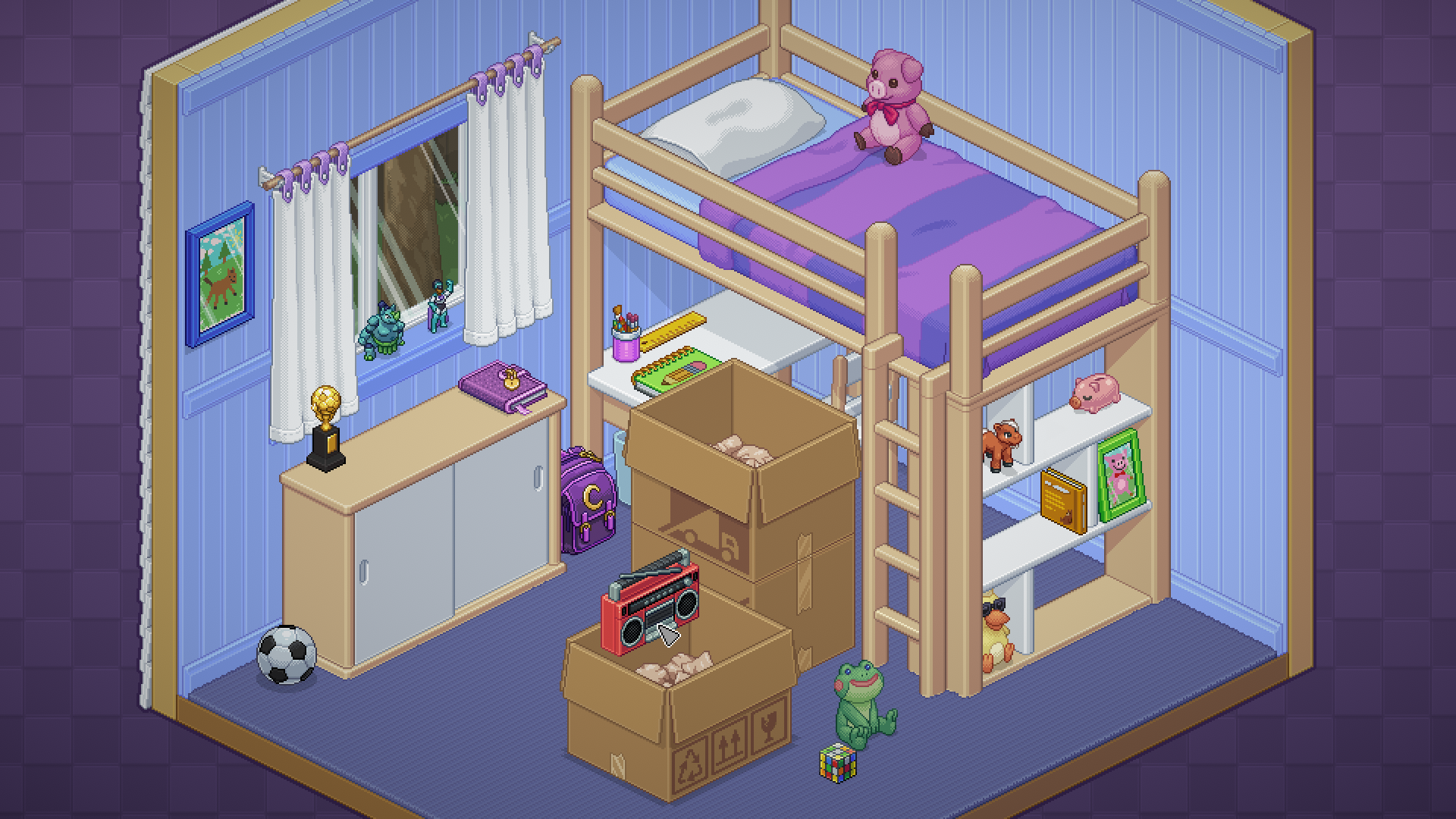 You begin at home in the mid-2000s, setting up your childhood room. Unpacking progresses as you move from home to home. The stages range anywhere from a small rental apartment to a shared basement walkout with a roommate, a fancier high-rise condo, to… well I don’t want to spoil it but the last few stages tugged at my heartstrings.

On top of that, you’ll move from year to year, taking old items with you just like you would in real life. A favourite mug, a picture of your dog and family, or even an old Gameboy-inspired handheld and D and D 12-sided dice. It’s a subtle, unique and interesting way of building a narrative.

Unpacking One Box At A Time

The game doesn’t waste any time letting you tear open cardboard boxes and place things where you want them to go. To start, you’re in one room. There are stuffed animals, pens and paper, notepads, an off-white computer tower with a matching monitor, and more.

Each item in Unpacking has 2-4 sides to it. You can turn them how you’d like so things look more organized, or spin them around to fit on the right shelf or in the correct cabinet. The isometric view allows you to scope out the rooms you’re in and essentially decorate how you see fit. 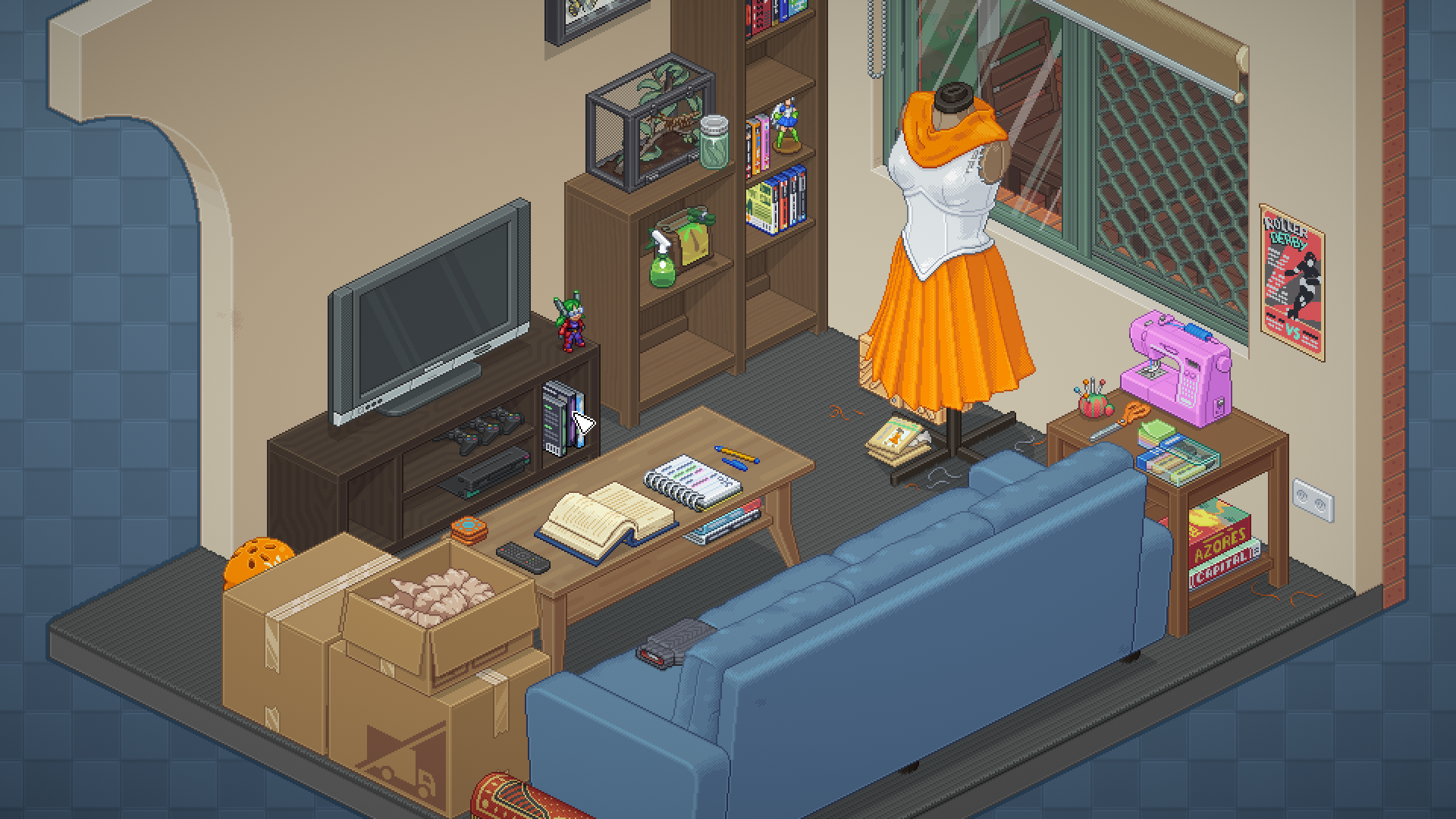 But, this isn’t necessarily a sandbox-style game, there’s also a minor puzzle element as well. As you progress, you’ll be tasked with unboxing and… unpacking, numerous rooms in each stage of life. If an item like a bottle of soy sauce is left in your bedroom closet, well before you move on, that little guy needs to be placed in a cupboard or on a shelf in the kitchen.

The gameplay sounds simplistic, and it is, but I felt from the start that’s exactly why this game needs to be experienced by anyone who needs a few chill hours to themselves. If possible, I do recommend playing Unpacking on your PC. While it is available on a variety of platforms, the mouse is far more intuitive and much faster when clicking and dragging your character’s belongings in place.

You know when you tear off the perfect piece of tape, fold the perfect sheet of paper, pour the perfect glass of wine, beer, or water? That satisfying but brief moment of accomplishment is what it felt like to place the hundreds of items in the game. Unpacking plays tens of thousands of sounds that you’ll hear as you place items on different surfaces. For example, I’d place a cup on a carpet in the living room, then in the bathtub, just to hear what it sounded like. Plus, as I write this I’m listening to the soundtrack, it’s excellent.

Unpacking’s visual style is no slouch either. It’s eye-popping and colourful, while also being simplistic. Not only that, the devs have found a great way of making objects like DVDs, art books, and gaming consoles and accessories that you’ll recognize from a distance (Jaws, Hitchcock movies, a Wii). It’s a ton of fun to discover these when you take them out of the box.

For me, one of the most memorable moments in gaming this year will likely be from Unpacking. Without spoiling it, I’d like to take you on a small journey. I unboxed an item, placed it in the room I thought it belonged. Then, 10 minutes later I found 5 more of that very item. Once I stacked them all together and in the correct room, Unpacking became a narrative game I didn’t know I needed and made me gasp and say “aww no way” out loud at my PC.

Unpacking doesn’t hide its gameplay too close to its chest. You’ll be opening boxes and unpacking your life one move at a time. But it’s in the subtle storytelling moments you discover book by book, towel by a towel, and mug by mug that really make this a near-perfect relaxing, fun, and also emotional experience. I nearly teared up at least twice playing this game. That might say something about me, but I believe it says more about how special Unpacking truly is.

Unpacking is one of the biggest surprises of the year and yet another indie title that I’m happy to recommend. All the praise goes to a team that had a vision for storytelling, and quietly smashed it out of the park. If you have a few hours and even half of what I’ve written sounds appealing to you, go play this game and let us know what you think.