Naughty Dog released a statement today as I’m finishing up my playthrough of UNCHARTED: The Nathan Drake Collection. What made me feel the need to rewrite the opening to my review of said game? The fact that 80% of PlayStation 4 owners have never played an Uncharted game. Talking to website MCV, Naughty Dog community strategist Eric Monacelli was interviewed about the remastered collection.

“It’s pretty massive,” he admits. “We did a lot of research and discovered that about 80 percent of the people that own a PS4 have never played Uncharted, period. That was one of the reasons why we thought remastering it would be a good idea. Luckily that percentile will be able to finally see what the fuss was about.

Back in 2007 the first in the series, Uncharted: Drake’s Fortune was released by Crash Bandicoot developer, Naughty Dog. A wildly different game from their former releases, the first game in the Uncharted series was a critical and commercial darling, spawning a franchise and the go-to game for PlayStation 3 owners.

The games boast and epic and grand adventure visiting and unlocking the world’s hidden secrets from the past. Playing as Nathan Drake, a charismatic treasure hunter with a heart of gold, this man is our generation’s Indiana Jones.

Bluepoint Games has lovingly remastered all three Uncharted titles and hit a most welcome 1080p hitting 60 frames per second making each location that more beautiful.

While being eight years old, Drake’s Fortune still plays wonderfully. The animations and gunplay hold up well albeit if a little outdated. The original game has been given a few minor gameplay tweaks, such as adding the baseball grenade throw from the sequels into the mix. The visuals have been tweaked and appear much cleaner, better draw distance, and removal of screen tearing. There is much more under the hood than described and is noticeable. The second title improves everything that wasn’t up to par in the first game, noticeably the climbing and aiming to name a few. My personal favourite in the series, I smiled from start to finish from that superb train sequence at the beginning to the closing credits. The closing title in the PlayStation 3 trilogy was the biggest title of the three and had the biggest stakes for our hero, Nathan. Narratively, we have a much more personal story where the stakes feel higher. The Photo Mode returns and gives gamers a tool to create gorgeous and artistic shots of all three titles in the series. A fan favourite from The Last of Us.

This collection of three excellent games comes as a welcome addition to the PlayStation 4 library. The unfortunate omission of the PlayStation Vita title, Uncharted: The Golden Abyss, is a letdown, I did enjoy it. There isn’t much in the way of extras, the package is bare in that aspect.

All the work put in under the hood give this series a welcome tune up and refresh for another generation of gamers. With a cast full of interesting and loveable characters, UNCHARTED: The Nathan Drake Collection is a must. 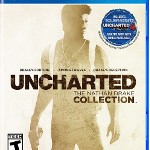