In what feels like forever, developer Andrew Shouldice and his team have been hard at work on Tunic a game that was originally revealed back in 2017. Five years later, we’re finally able to see the rewards of Shouldice’s labour — a game we’ve seen hit the circuits of several major game shows and award ceremonies over the last few years. I’ve spent a lot of time digging into the available demos and while it was always a charming teaser, the full game has alluded me. The closest thing I’ve had to alleviate the wait is last year’s Death’s Door from Acid Nerve, a game that feels like a direct tie-in.

With inspiration from The Legend of Zelda, you set out as one of the most adorable fox protagonists in recent memory. From the earliest moments to the closing moments, the game is rife with charm and a gorgeous, colourful aesthetic that will put a smile on your face. However, that’s about all you’ll be smiling about as the game will test your merit throughout the nearly 15-hour campaign — in a good way of course. This isn’t a game made for children and quite frankly, it’ll leave kids more than frustrated because of how intricate the puzzles can be or how punishing engaging enemies can be.

Tunic is unabashedly one of those video games where you’ll be able to scream from the hilltops how wonderful it is. There’s a love for old-school video game design with an air of secrecy pushing the player forward. For starters, Tunic uses fictional, indecipherable language to tell its story and you never know where to go next. Don’t let the lack of markers keep you from this gem, though because the satisfaction of finding where you need to go and through your in-game manual is so, so rewarding.

As a child, my favourite part of being gifted a new video game was reading the manuals included. Being a thing of the past, the manuals of my childhood were like tomes from the developers, full of information, secrets, and colourful pages filled with notes. Low and behold, that same feeling being able to on a whim pick up and read the manual in Tunic in a similar way — only with the in-game language filling the pages. Your task is to decipher clues through the images and tidbits found with the text with the satisfaction of finding the one hint to overcome a boss sprinkled within.

I went in expecting a rather straightforward experience, something I could knockout rather quickly. What I ended up getting was a game that circumvented all my expectations. Tunic is both a homage to The Legend of Zelda series and also the Souls games. After sitting down and writing this review, I don’t see it as a knock against the developers to compare the franchises as you can see where inspiration is drawn from while you play as a cutesy fox on a journey.

What does the Fox Say?

Combat is a highlight and will test you with every encounter. Enemies are formidable and rarely fodder to mow through as you move to the next bit of your journey. One of the best games of last year was Death’s Door a game that was far meaner than it looked. Similarly, you’ll be watching your stamina while dodging and attacking enemies. With the meter determining how much you can do before running out of gas, it’s good practice to be mindful or risk being open to counterattacks. If your meter runs out, incoming damage is more than doubled and you’ll need to make sure the meter is filled before pressing on.

With several enemy types available to tackle, each one with a unique attack pattern and defensive capabilities, you’ll have to learn how to engage each one. Simply moving in and attacking might work for a lesser game but Tunic is not that — use your Souls knowledge to guide you. Learning how each enemy moves, when they attack, when you need to dodge, when you need to block — it’s like learning to dance and is necessary if you want to survive.

Along the way, shrines litter the environment with these places filling health and any healing items on-hand. There is, of course, the fact that resting at these shrines restores any defeated enemies and any time you fall in battle, you are returned to the last shrine, just like in Dark Souls.

Tunic is more than a love letter, it is an exemplary video game filled with creativity and respect for the medium

A remarkable achievement is how excellent the level design is in Tunic. Pulling from a few genres, Tunic is laid out in a way where you need to have the right tools to access bits of the map. Progress is doled out in a way where discoverability is critical to the experience. With hidden entrances, passages, and treasures masterfully embedded into the flow of the world, you never go long without wanting to go in every direction. Shortcuts woven throughout the interconnected map are beautifully laid out isometrically, using the familiar view to keep the world’s secrets just out of reach until it is ready to show them to you. 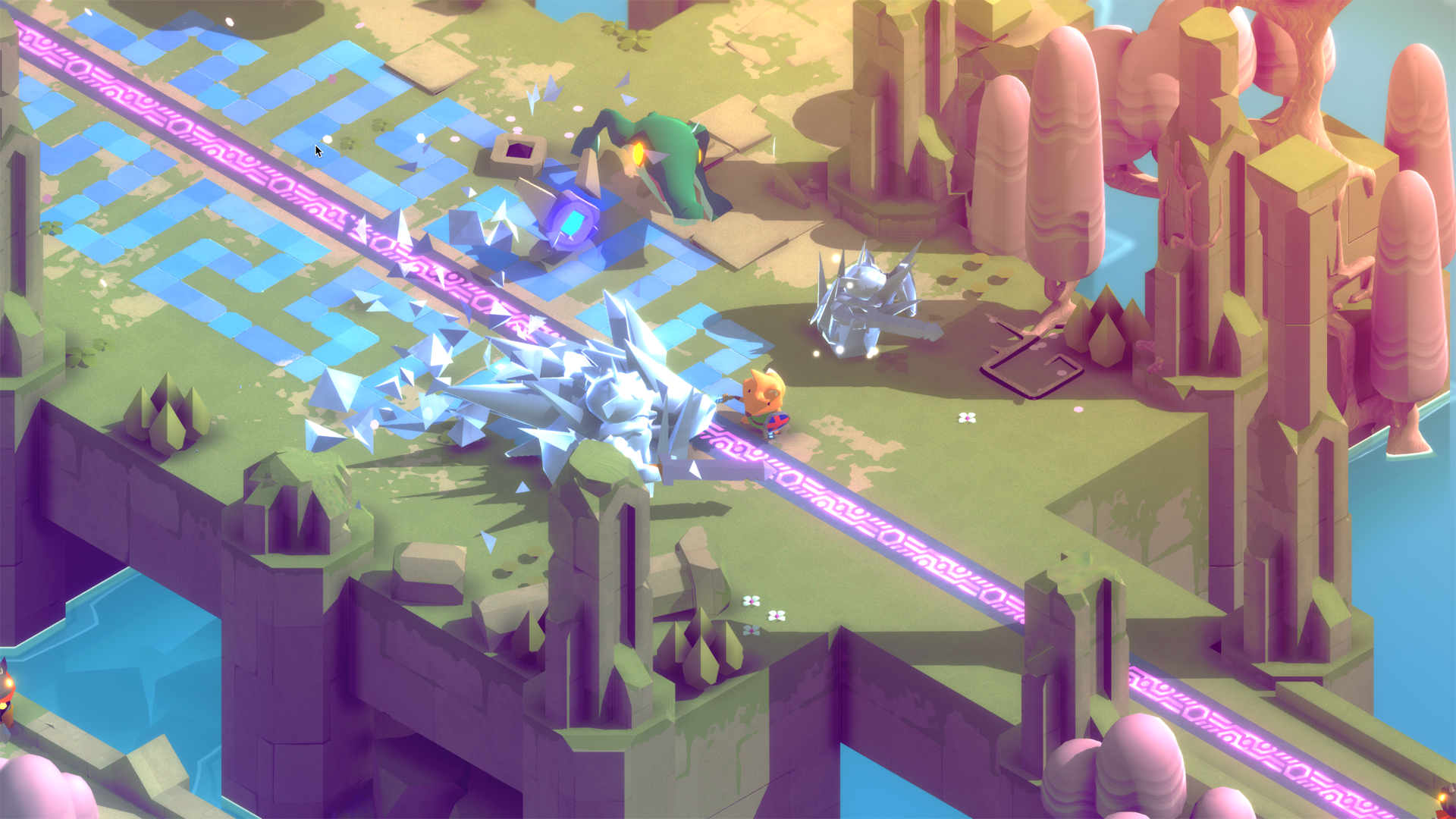 By now, the game sounds like something you will love or hate depending on whether or not Tunic is accessible. The developers have added some features to make the game available to everyone including a way to remove the stamina meter or bypass damage completely and be able to simply play the game without worry. Removing barriers is something more and more developers are working towards and seeing these options available when bigger games have yet to make the change means more players will be able to join in on the fun.

I realize as I write this I am trying to be as spoiler-free as possible and not because I was held down by an embargo. I’m being this way intentionally because much of the excitement I had was tied to unlocking new pieces of the in-game manual, a tome filled with illustrations, notes, and how-to guides against the several bosses you’ll very likely have trouble with defeating. Like most of the reviewers covering Tunic, I struggled with the boss encounters and it was only after I decided to look into the manual that I found what I needed to overcome the obstacle in front of me.

With Tunic’s stealth drop onto Game Pass, you have absolutely no reason to what is one of the most exciting games so far this year. From start to finish, Tunic is delightful, charming, and masterfully iterates on its influences into a unique experience. While some may not join how opaque Tunic can be at times, I found it to be one of the game’s biggest strengths — you don’t need a marker to push you in the right direction, just a manual and some patience.