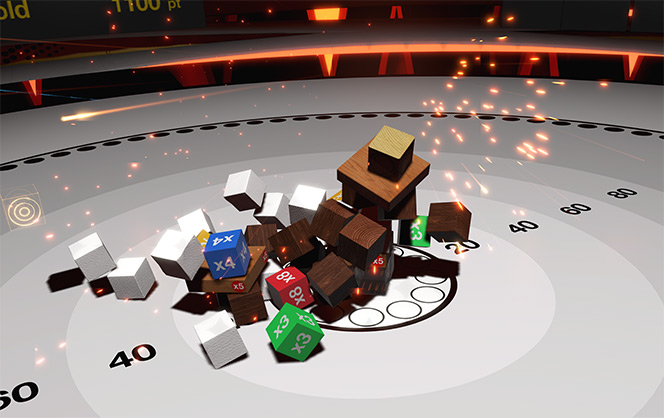 I missed out on the Move phase on PlayStation 3. I missed out on the original Tumble which used the Move controllers in a new way at the time. Six years later and Tumble has gone into virtual reality. It’s good and it’s one of the titles I come back to after blazing through the library I have.

In Tumble VR, you’re tasked with manipulating blocks and going up, and up and up! The higher you can stack the blocks without having them come crashing down, the better. It’s not as easy as you might think, either. There are three tiers to complete between bronze, silver, and gold. There are different size blocks and shapes and you need to make sure they stack without losing your height.

The Move controllers have been hit and miss with the VR so far, but, Tumble has been consistently the best game to utilize both wands for their purpose. I haven’t experienced such precise and accurate movements during my time with PlayStation VR. Just be sure to not shake too much, one bad move and it all comes tumbling down. You can also use the DualShock 4, but it’s not as fun as the wands. There’s also a multiplayer mode that includes player 1 building while player 2 tries to sabotage the progress being made by booby trapping towers.

Tumblr VR is an interesting and fun game. The thoughtfulness of the gameplay puts it leaps and bounds ahead of a big portion of the launch library. The controls, the depth of the VR and the simplicity of the gameplay put this into the must-try category for anyone who wants to purchase PlayStation VR.