I don’t know who decides the names for each video game being developed over at Square Enix, but I can get behind the randomness Octopath Traveler and now Triangle Strategy bring when you first hear their names. For the last few weeks, curious fans have been working their way through the free demo that’s available of the strategy RPG. Originally being revealed during the February 2021 Nintendo Direct livestream, the game formerly known as Project Triangle Strategy left many excited. It’s been a long time since we’ve seen Final Fantasy Tactics. Fans of Square’s strategic spin-off series have clamoured for a follow-up for years and many looked to this latest project for consolation.

Triangle Strategy puts you in the role of Serenoa Wolffort, heir to the House Wolffort. Our protagonist resides in Norzelia, one of three major countries on the continent — the others being Glenbrook, Aesfrost and Hyzante. These established realms are in the midst of a truce, following the Saltiron War from decades past. To ensure each country’s survival, a delicate peace has lingered and now events transpiring seek to ignite another conflict.

From the Salt, We Rise

One of the biggest things that set this apart from Octopath Traveler is the story structure. Gone is the disjointed, confusing structure. Instead, the way things unfold in Triangle Strategy is much more defined but at the expense of pacing. From the earliest chapters, the dialogue-heavy moments pushing the narrative forward demand your attention — there is a lot of lore and alliances to remember. Even during the demo period, I found this exposition to be overwhelming but it was also necessary to instill the player with the knowledge needed to understand the history. I don’t want to delve too far into the world-building but there are several elements that players will find familiar if you’ve ever played a JRPG before. Not long into my playthrough, Frederica Aesfront, the chosen bride for Serenoa is chastised by her peers. To keep the review light because I don’t think it’s the place to discuss marginalism, Frederica’s of Rosellan lineage and with that means her hair and pale skin are often a rule of contention. Regardless, the writing does a decent job at making you understand many of the underlying motives of the characters (even if they don’t make a lot of sense).

Regarding combat, I’ve been away from any SRPGs (Three Houses was my last dip into the pool) for some time. Diving into the familiar mechanics is like a good stretch — necessary and beneficial to the main exercise. You control Serenoa and those who are sympathetic to his cause. However, to even gain any traction and support for your cause, House Wolffort operates with nobility — each place you need to visit can be visited if the required number of votes from your council is met. 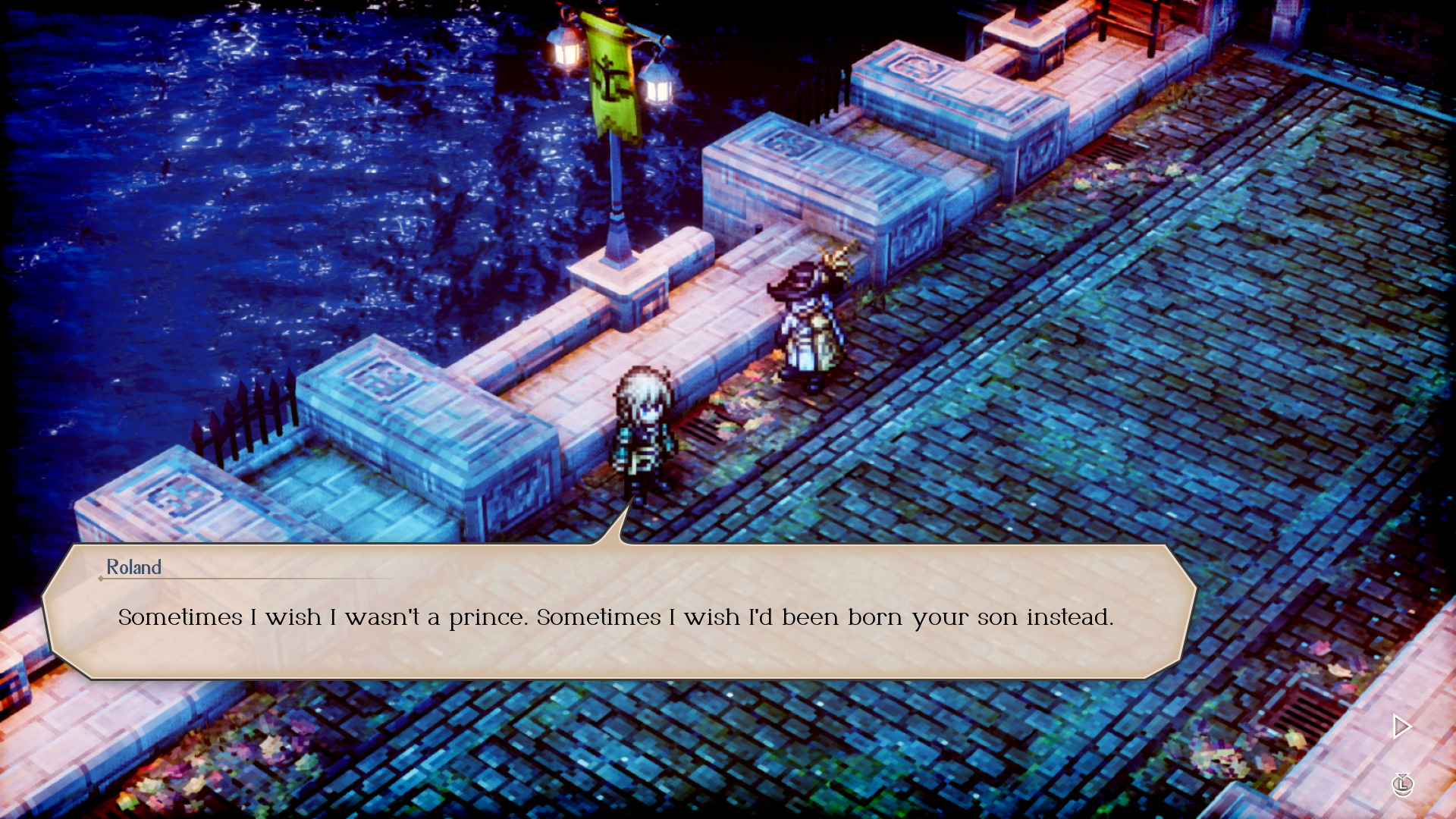 Scales of Conviction decide your story path and which allies will join your plight. Much of this ride on what choices Serenoa makes and the stronger his conviction is, the more likely it is to get what he wants. For example, Norzelia focuses on Utility, Morality, and Liberty. These aspects of the game come into play well into the opening chapters and help set the stage for how your journey will unfold in the hours that follow.

All of this is told by a rather muddling English dubbing that never takes off. I learned to adore Serenoa and his love for his kingdom. Roland’s a standout character who feels realized through his dialogue but the moment we hear him speak. Tertiary characters fare no better and even Frederica isn’t given a worthwhile voiceover — I’m not sure what happened behind the scenes but it really is off-putting after coming off impressive performances throughout the month of February. While the cast doesn’t resonate with me as much as the cast of Final Fantasy Tactics, they are well-written and as an adult, I appreciate the new perspective the writers went with over the previous series Octopath Traveler. Don’t jump into Triangle Strategy and expect random encounters — this isn’t that type of JRPG. Much of the encounters you’ll face are usually prefaced with story exposition before having the story’s battle unfold. These contained sequences will be familiar to anyone who’s played Final Fantasy Tactics and you’ll be given the opportunity to prepare your party before facing your enemy. If you so desire, you can even insure your success by upgrading weapons and promoting party members — I would recommend doing this because some of the encounters (especially later in the story) will test your patience and even keep you on the edge of your seat.

The only real complaint I can offer here is the pacing — you tend to be hit with a lot story before seeing another battle.

Battles occur on a grid as you proceed in turn-based fashion. Your highlighted members are given the chance to make a move and complete an action — whether that means moving toward danger or away from it — and you can even corner enemies for a bonus to make quick work of the encroaching forces. Given how I am often unsure of the move I want to use, the added Simulation Mode is crucial to my strategy. This essentially allows the player to see any moves they do and the results of said action without any penalty.

How you place each party member is also key to winning an encounter. Placing the right party member from the high ground will grant additional damage. Considering where to place each unit and confirming they have the backup to strike hard against an enemy will decide the outcome of many battles. You can even chain attacks if you line up enemies when the entire party works together. Finding the right combination to create these moments is worthwhile but will sometimes lead to frustration if things go awry — there were several battles that I had to replay because of the overconfidence that I paid dearly for. Each member also comes with innate skills that will temper your brevity in battle. Serenoa is a cut and dry swordsman, his skills excel at physical damage. Anna serves as a spy and while doesn’t have the innate strength of a Knight, she will usually have the first move. Her passive skill will even allow you two turns in a row. Her offensive stats may not save her but her evasiveness will. Geela is a healer and she’s crucial to surviving most encounters. Frederica isn’t strong but her magical abilities make her formidable. Similarly, Rudolph excels at ranged combat and his traps will disrupt an enemy with ease.

Salt of the Earth

I’m only scratching the surface here on what a player can do with a stacked party. Being able to create a team capable of tackling any situation and the ability to bring down the enemy is always rewarding. This reminds me of how powerful I felt in Final Fantasy Tactics years ago. However, to get to that point the earliest moments and for much of my journey, I found myself consistently hanging by a thread. With Triangle Strategy offering 20 story chapters across dozens of hours, it wasn’t until the later sections that I felt comfortable enough in battle as I would always be forced to the edge of my seat for fear of losing my party.

I do plan on returning to the fray as Triangle Strategy offers branching story paths and multiple endings. I’m ecstatic to see the HD-2D style introduced by Octopath Traveler has been given another series (or two) to showcase how stunning voxels can be. We’ve seen how this new presentation style has resonated with fans and Square Enix is actively looking at incorporating the style with more games in the future. So, it pains me to see how horrific the English dub is when the game looks so damn impressive on Switch. This isn’t a knock on the voice actors as they show up and do the work but the sound engineers and editors have some explaining to do.

I can only compare the dub to playing a game on PlayStation 2 — there’s very little sound mixing added to the experience and it brings the entire story down because of how disappointing everyone sounds. Paired with a soundtrack from Akira Senju that stands out on its own merit and you can see why I’m disappointed as the lack of editing creates a divide between everything else. For fans of classical SRPGs in the vein of Final Fantasy Tactics, you’ll find the closest follow-up in over two decades. With a cast brimming with memorable characters, punishing but rewarding gameplay, and a story worth its weight in salt, Triangle Strategy is a satisfying new series that has some strong legs to stand and bolsters the Switch’s lineup as one of the must-have exclusives.