I think that by the end of 2022 and well into 2023, we’ll see dozens of video games using the term Metroidvania. I’m not opposed to indie developers tackling the genre because there is clearly a lot to work with but it all comes down to the formula and whether or not the developers are using it to their full potential. Enter The Witch Knight, a title that successfully mixes genres and is one of the better Metroidvanias out this year.

Developer Super Mega Team returns after working on Rise & Shine with Team17 as the publisher. Moreover, Team17 has been very active this year with titles such as Bravery & Greed, The Unliving or Ship of Fools.

Anyway, back to The Knight Witch! I mentioned above that it was a Metroidvania but we could classify it as an adventure game, a twin-stick shooter or a shoot ‘em up. One day, Emperor Erebus of the Daigadai ignored the warnings of scientists and decided to gamble everything to enrich themselves, which then led to the loss of the planet as a result of climate change. With the Daigadai now at fault for ruining the world, they label the Knight Witches as the enemy, leading to the world heading underground to rebuild society. 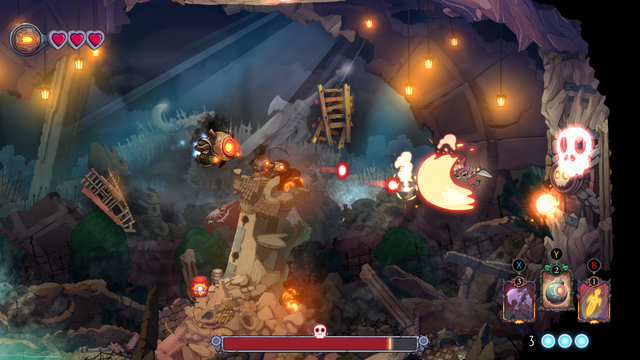 Personally, the story doesn’t bring anything new to the table and you’ve likely seen something similar in books or films. With that said, I found the dialogue to be commendable and a highlight as it tends to work because of the humour. 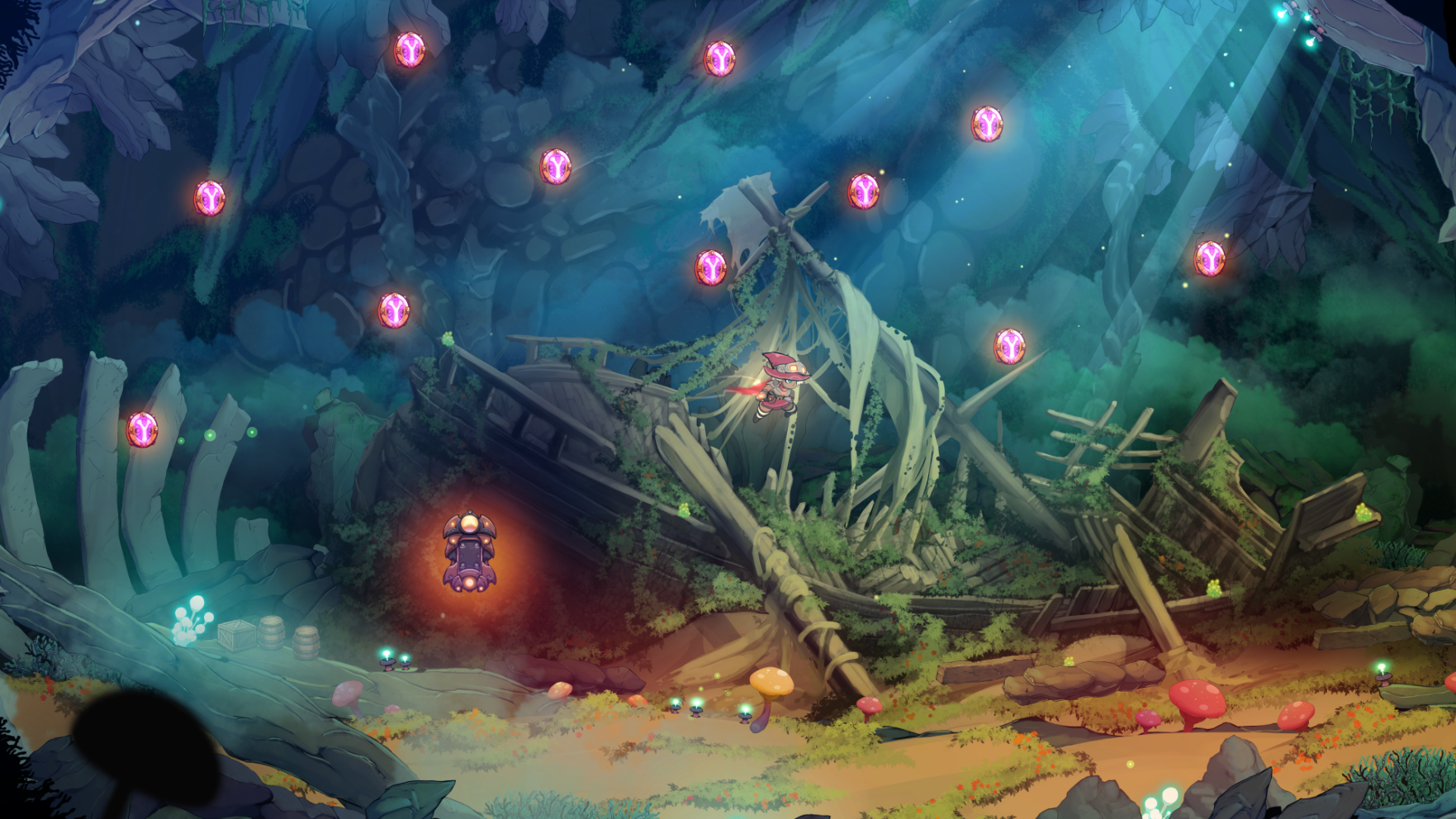 In Knight Witch, you control Rayne, a character with the ability to float around the entire screen in both open spaces and close-quarter areas As a Witch Knight, you use the controller’s triggers to cast spells and shoot down the many enemies in your path with your fireballs. The shoot ‘em up aspect comes into its own here, as does the twin-stick shooter aspect as, to control your fireballs, you’ll have to use the joysticks. The good thing here is you can either manually target enemies or automatically set your spells to attack, giving you a level of precision or focus on surviving when things become inevitably hectic. 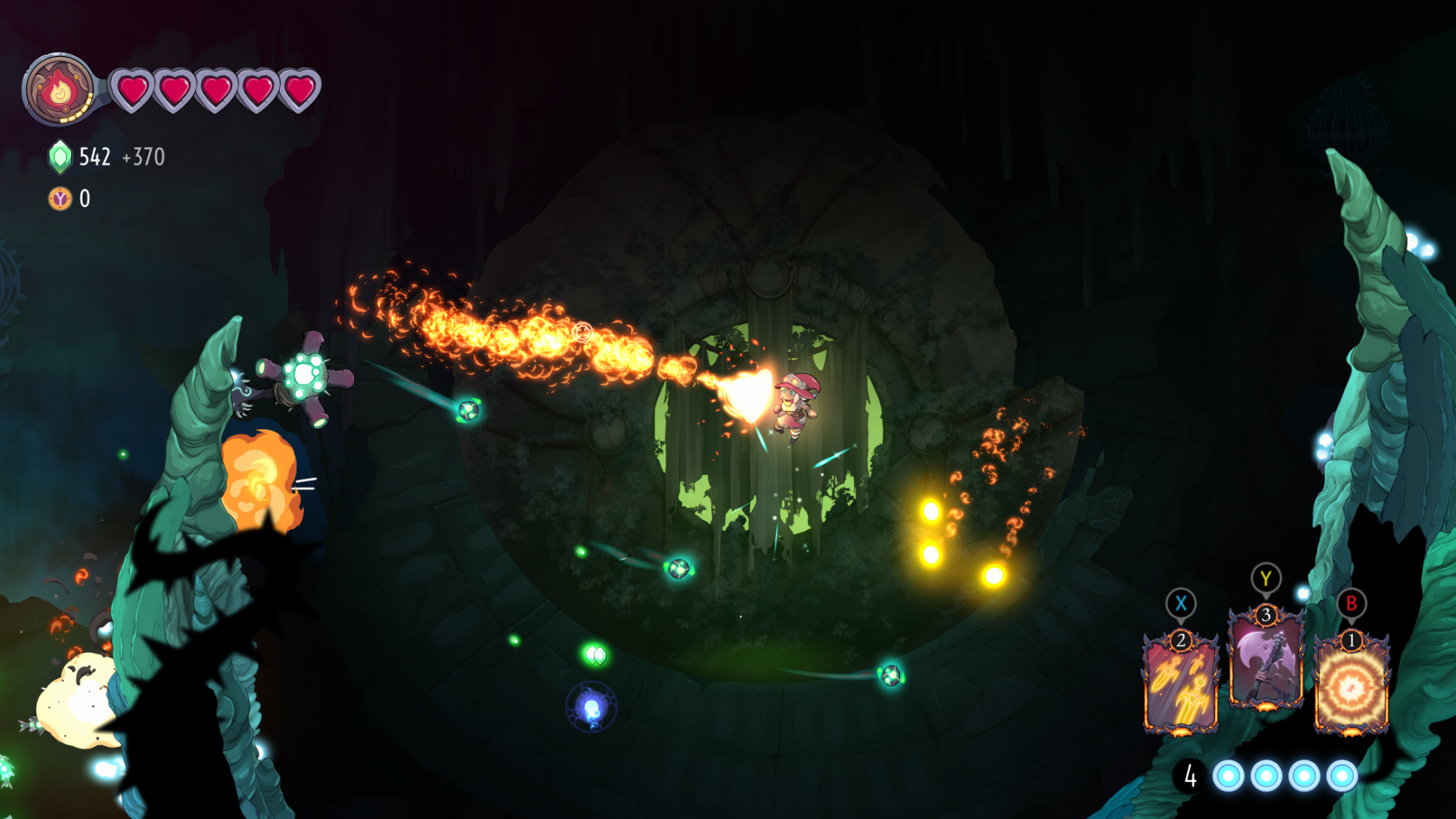 Pick A Card, Any Card

For your spells, you’ll have to manage them with spell cards. You can have six cards at a time and they will appear on the screen in pairs of three. Their appearance on the screen is purely random so you can have the same three cards twice in a row. Each time you use a card, it will be crossed out to use a brand new one. Be aware that each card will require mana and this will be displayed on the screen by means of small white balls. This consumption depends on the card chosen when attacking the creatures. You start with six standard cards, but you will be able to find them in chests hidden in the levels and even find them on bosses. Small red coins will be available throughout your adventure. They will allow you to get some cards too but in a random way. It is also possible to put the same card in your deck several times thanks to a cloning system in the shop, which can be found in your starting hub between your missions. 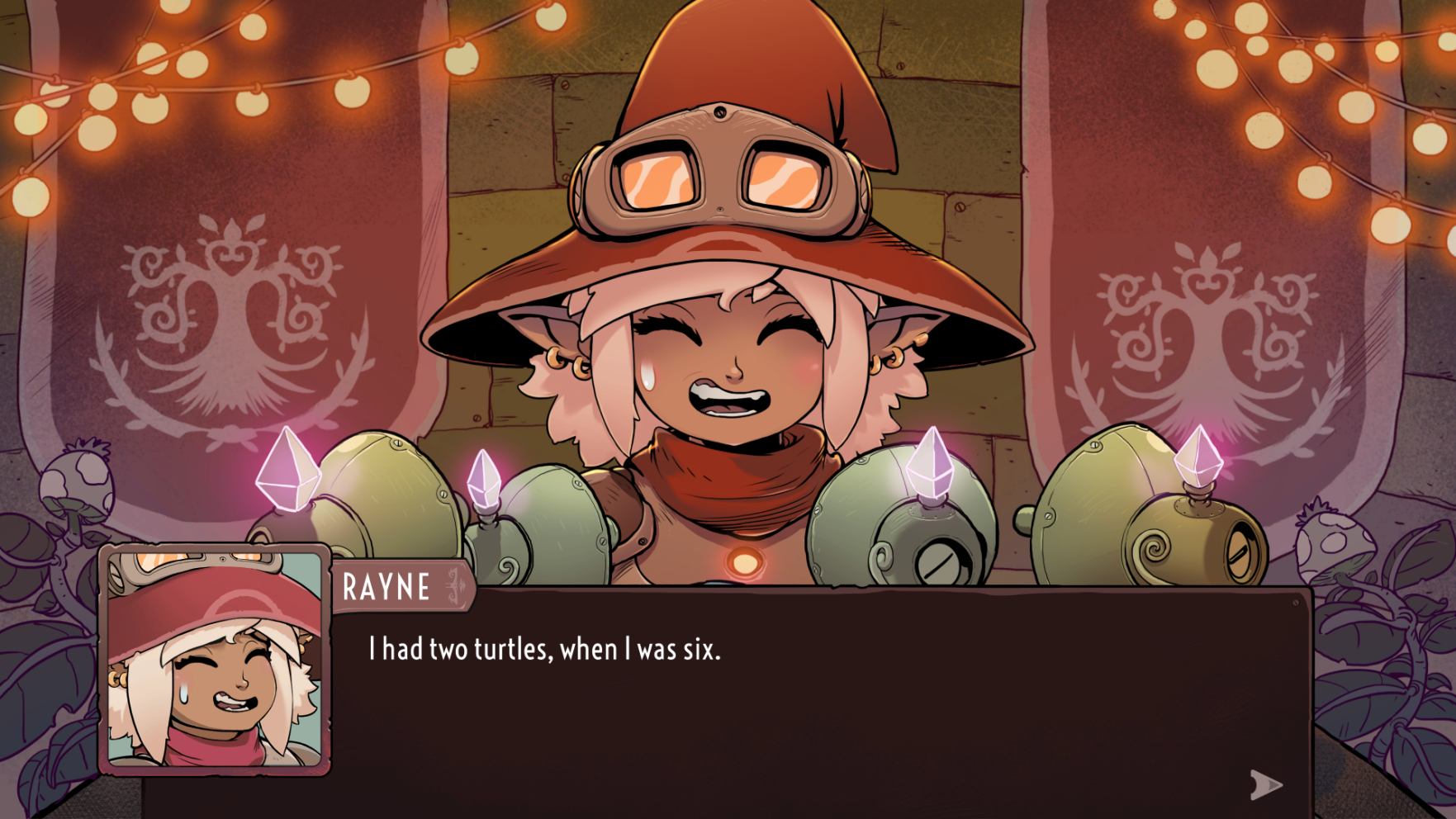 Earlier, I spoke to you about the link between the inhabitants and your Knight Witch. You will have to maintain this link by answering the residents between each mission. You will be able to choose between lying or telling the truth to the people. Each line you choose will give you experience on your personal level. You will also be able to pay with small green crystals, which you get by killing creatures, to maintain this bond. You can even rescue the residents of Dungeonidas to become stronger but you’ll need to complete side quests to make the most of the experience. 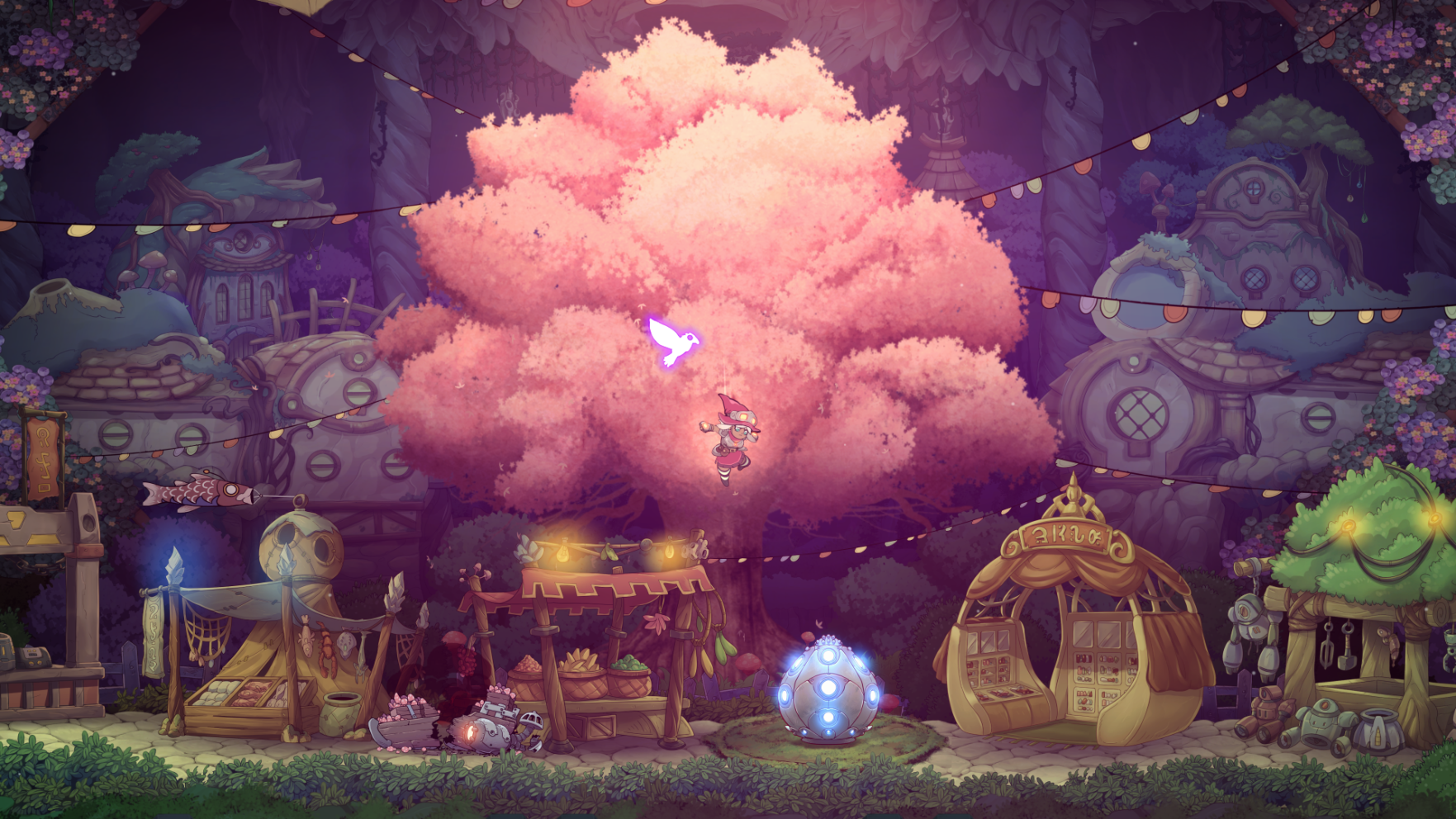 Your Knight Witch has a level, represented by a rank, which will only increase as you complete missions. Being a fairly linear game, your character will gradually increase as you play. Once you have gained a level, you will be able to choose a new attribute such as attack or magic. These attributes will give you an advantage in the chosen section. For example, if you choose magic, well it will give you an extra mana ball to be able to possess more magic. 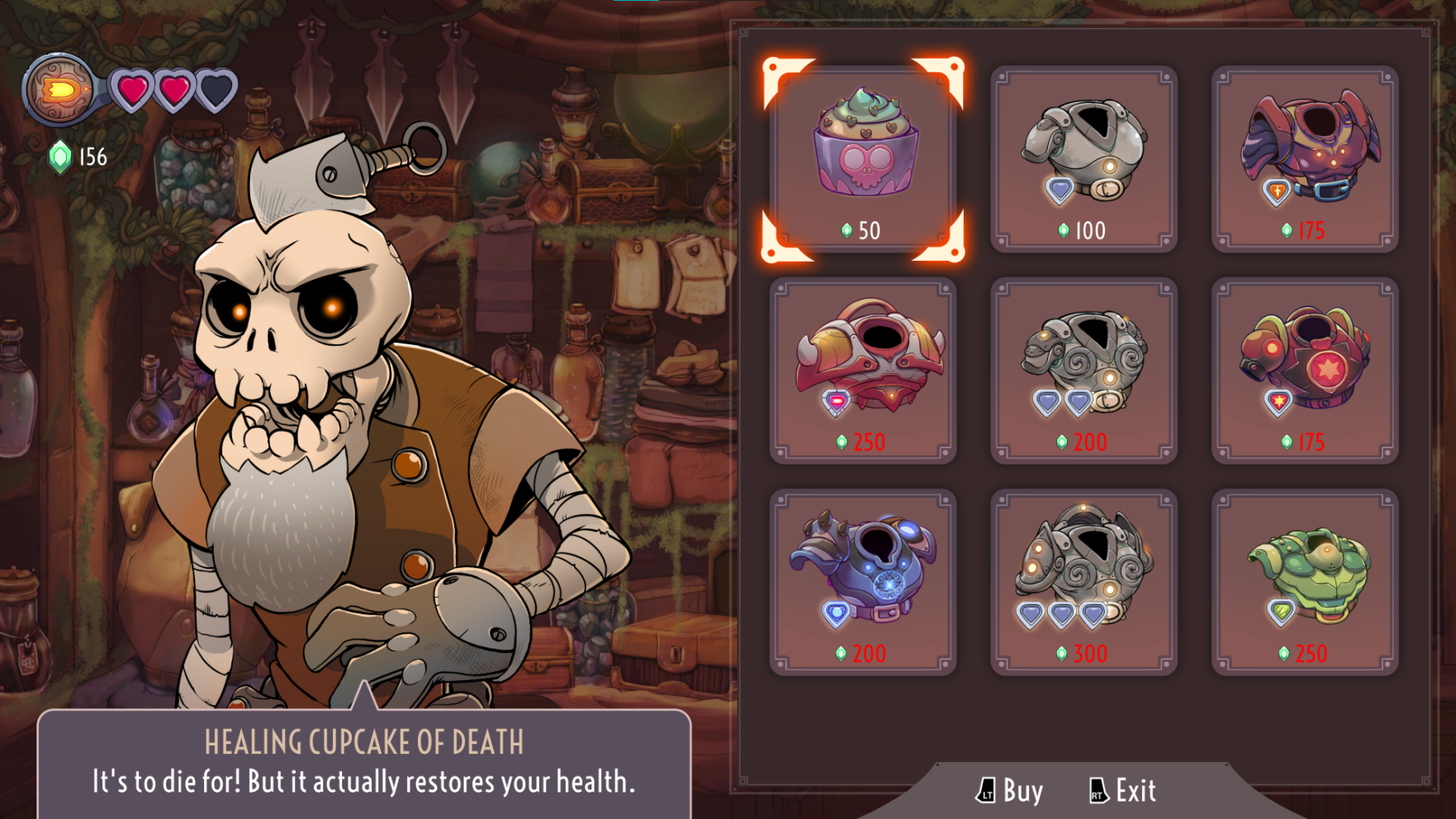 The gameplay of Knight Witch is unique and worth discovering but, on the other hand, it is not perfect. I found the difficulty to be very poorly balanced. At times you will find yourself in a twelve-by-twelve room and an alarm will start to sound. You will be told that you have been ambushed. Keep in mind that this is a shoot ‘em up and you are in a twelve-by-twelve room. You will start over many times and realize that there are not enough savings points, which may make you give up at times. 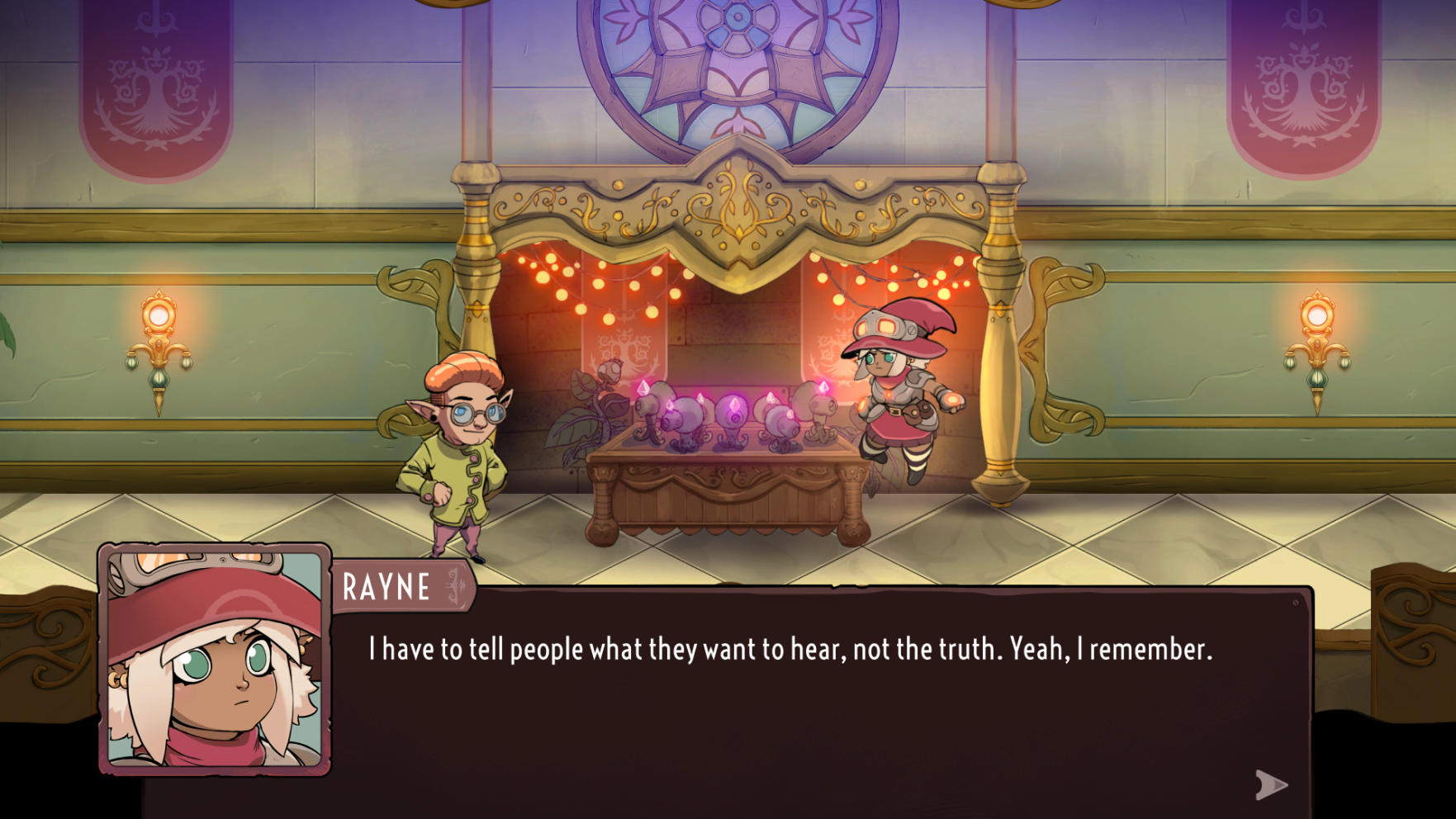 As for the creatures, there are a lot of duplicates which have, in fact, only their colours changing according to the level, which I found quite a shame considering the graphics. All in all, each level is detailed and filled with colour. The forest level is very detailed and the aquatic sequences are breathtaking.

The Knight Witch is an exciting take on the Metroidvania genre and one that is elevated because it takes some risks with its gameplay that pays off. It is also filled with humour and wit and is one of the better-looking games out this year while it may not be for everyone those looking for something light and friendly should look no further.