Back in July 2020 during the Xbox Games Showcase was when SteamWorld developer, Image & Form showed off third-person adventure platformer, The Gunk.  I was completely enamoured by the trailer, giving me a reason to keep my eye on it. I love 3D platformers and the ‘Ratchet & Clank‘ energy I was feeling from its initial trailer was hard for me to ignore.

It left me excited and I knew I had to review the game but what I was left with after playing it didn’t live up to my excitement. It’s not a bad game by any stretch, at the end of the day I still enjoyed my time with the game. The Gunk is pretty good while being a generic 3D platformer that’s limited by its approach to gameplay that features a captivating story that fits perfectly as a day and date Xbox Game Pass title. As far as length, The Gunk is a pretty short game which I beat in five and a half hours in two play sessions. If you’re looking for a short game to play then The Gunk might be one to check out.

The Gunk kicks off with a spaceship, named The Bunny, scoping out a planet that looked untouched. The spacecraft is being piloted by a pair of space scavengers, Rani and Beck. You land on the planet and you control Rani – voiced by G4’s Fiona Nova – who is a self-proclaimed adventurer looking to explore the planet as the player unravels its secret history. The first thing that Rani discovers is a substance that is corrupting the planet that the duo calls ‘Gunk’ which feels slightly like a commentary on climate change especially when The Gunk disappears. 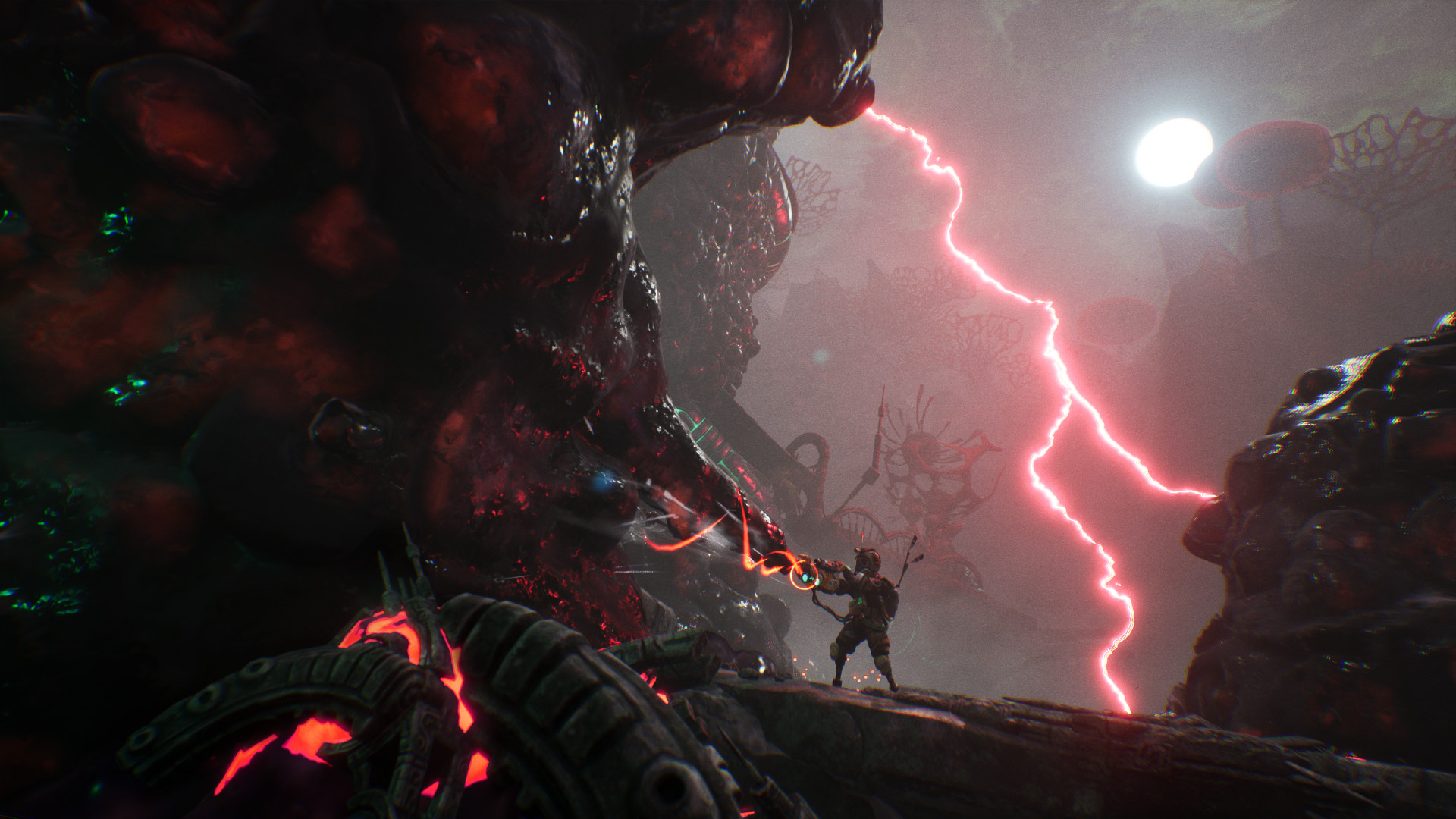 To get rid of the titular substance, Rani sucks it into her power glove which is a prosthetic to replace the arm she lost a while back. How she lost it is allelaborated in dialogue with Becks but players get no visuals of what actually happened visually as the dev chose not to focus on it too much. After getting rid of The Gunk in an area nature immediately returns to the area. Rani is extremely motivated to explore the planet while Becky is more of a realist and wants to leave the more Rani discovers more about the planet and its dormant secrets of a shattered civilization.

Honestly the more I dived into the game’s story, the more that previously mentioned ‘Ratchet & Clank‘ energy I felt in the story between Rani and Beck’s relationship. There is a point in the game where both Rani and Beck comes to a point they get mad at each other and refuse to talk to each other, which is very reminiscent of Insomniac’s first game in that series that laters evolve in the game. While a short story, The Gunk does end in a satisfying conclusion to the game in an open-ended way that leaves room for a possible sequel. 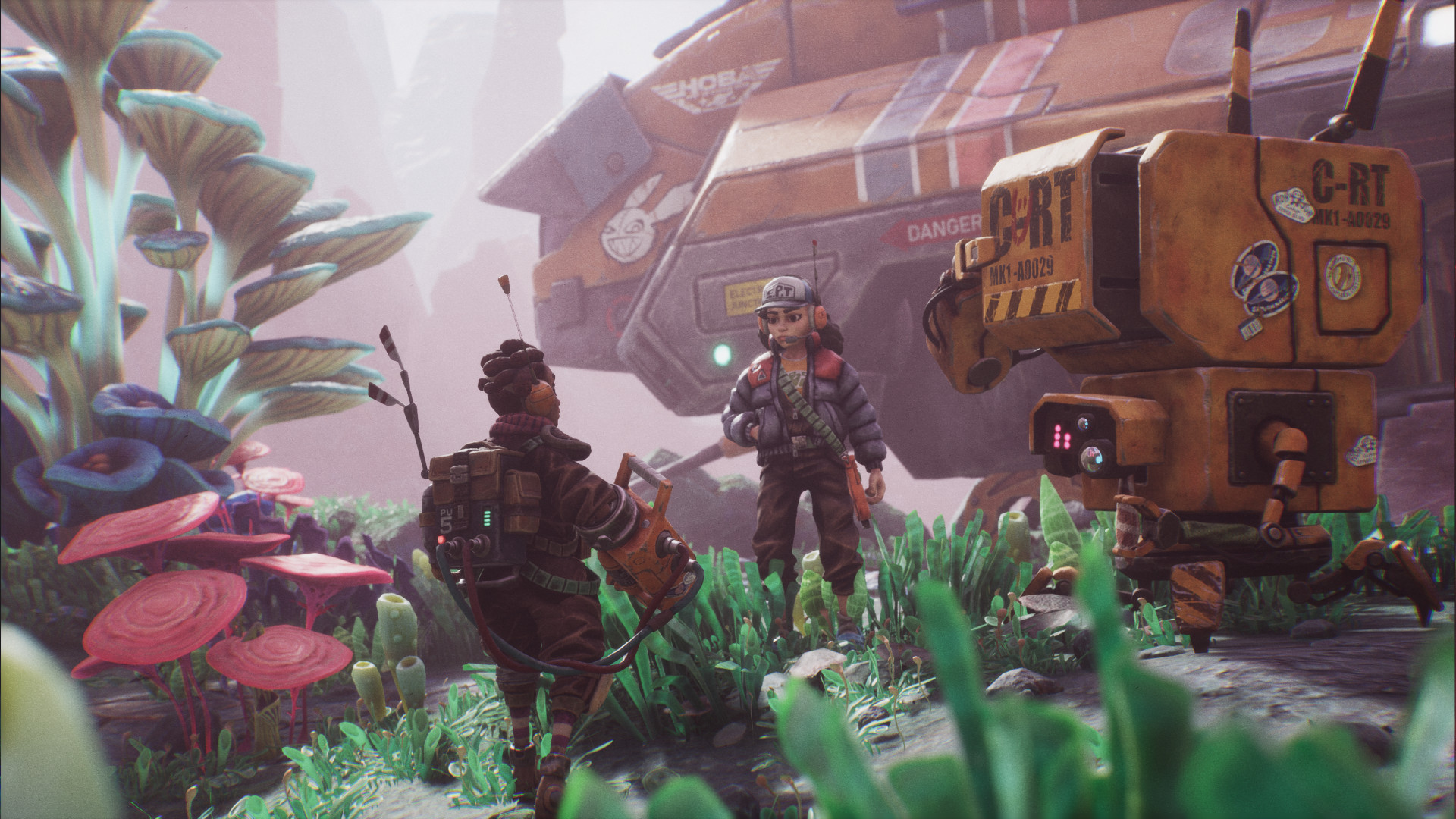 Getting into gameplay, as Rani you explore a lush jungle planet in a linear game that you can fast travel around seven points in the game. At the start of the game, after landing on the planet, players are introduced to the game’s two themes of corruption and growth. As previously mentioned Rani uses her glove to suck up The Gunk to bring nature back to the planet’s ecosystem.

The power glove’s sucks into a seemingly infinite void – reminded me a bit of Kirby or the Suck Cannon from the original Ratchet & Clank, to be honest – is the main gameplay loop of the game as cleaning up The Gunk is how you progress, that gets repetitive real quick. You’re not just dealing with The Gunk but also enemies too, who are creatures corrupted by The Gunk as that’s the only way to defeat them is to suck them up, which can be tiring on your trigger fingers after a couple of hours. Enemies range from smaller creatures to rhino-like creatures that you can defeat by sucking the substance from the back of their after dodging them. It can get annoying with long-ranged enemies that shoot energy projectiles at you which you can suck up and send it right back. 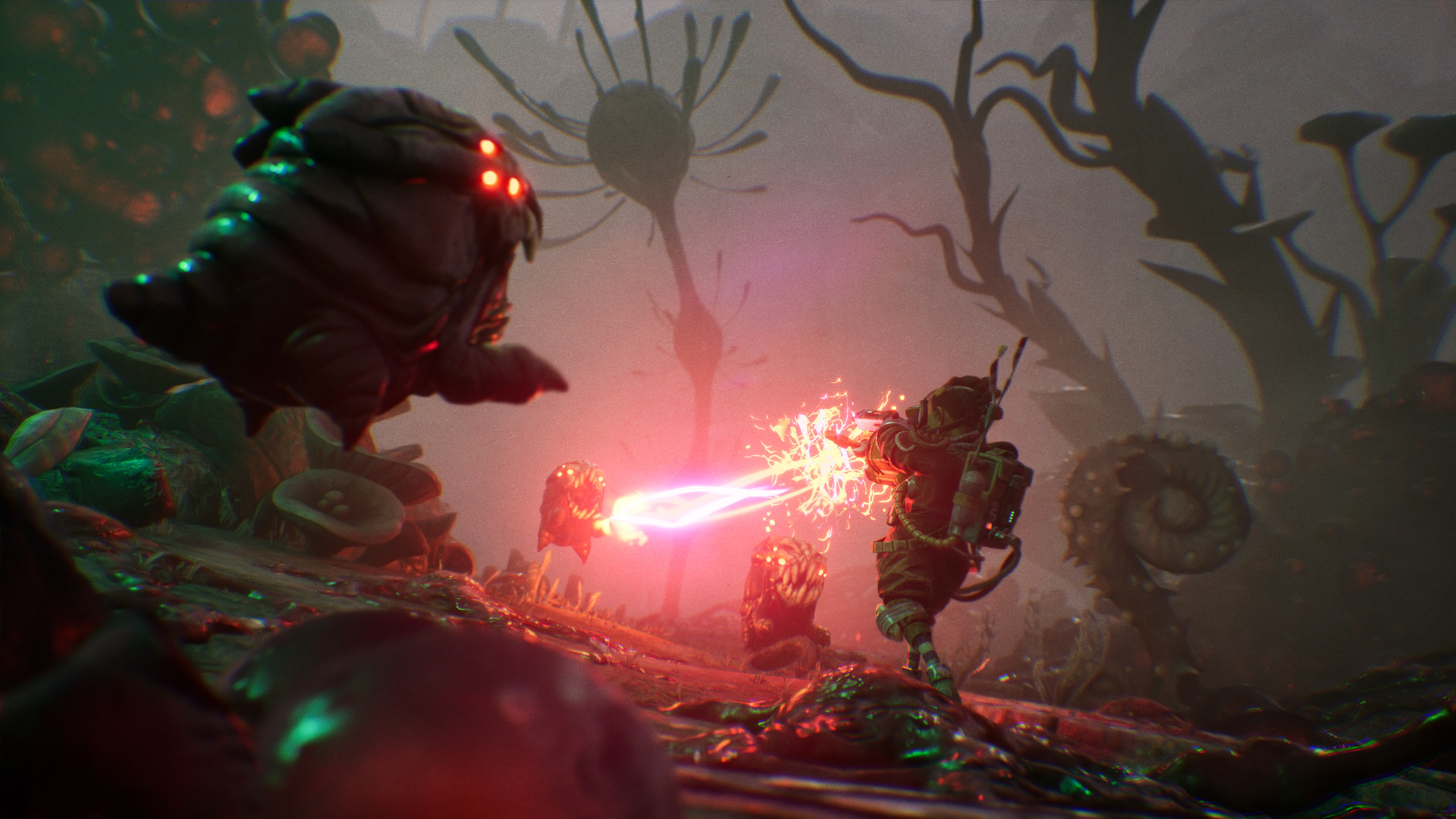 Thankfully The Gunk does a good job of giving players more things for players to focus on, as there is a resource system in The Gunk. Throughout the game, Rani can suck up materials like plants, metal, alien substances and so much more that you can use to upgrade your gear. In order for upgrades to pop up, the players is scanning the plant life and minerals of the planet which incentivizes players to scan everything they come into contact with in areas like the jungle, caves and the unknown. A couple of those upgrades include unlocking a blaster that’s used is aiming at buttons to unlock doors.

Jump through Hoops to Upgrade

One knock I have against the act of upgrading is that you can’t do it through the game menu. In order to upgrade you have to go all the way back to the beginning of the game where your ship, The Bunny is located. It’s not that big of a deal as The Gunk has multiple fast travel points which the first one is right next to the ship so not that much of a slog but still, I’d prefer it if I could upgrade Rani’s gear in the menu instead of only being able to look at them from the menu. 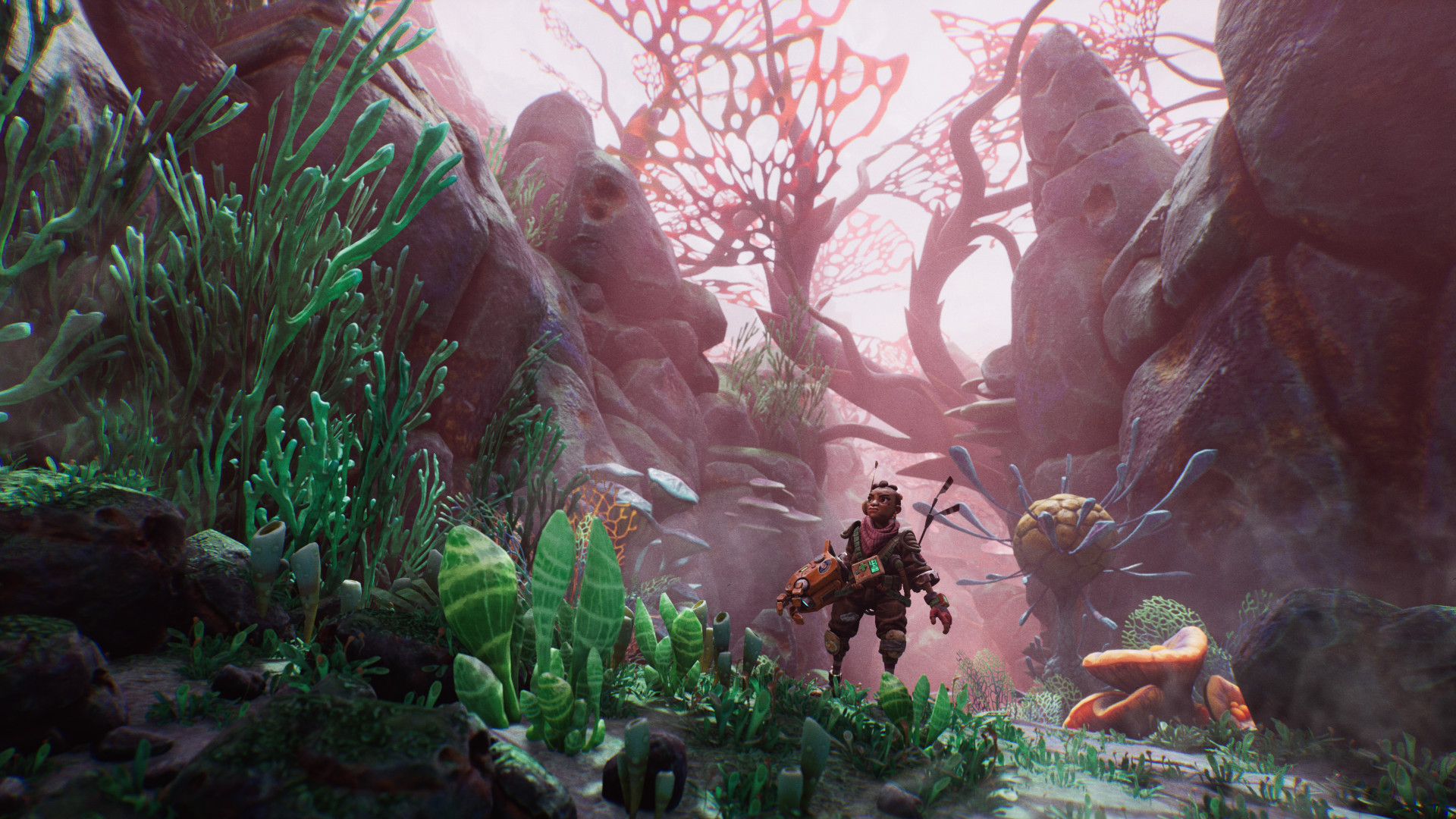 Visually the game isn’t that impressive to look at which it still is a pretty game look at, for me, it has nothing to do with the game’s graphics but the art style choice for The Gunk had a negative impact on me. I’m aware this game is realized on Xbox One but it looks gritty in comparison to the three award-nominated platformers. It looks as visually appealing as a really good-looking Xbox 360 title with lots of shine to it for me. It doesn’t take away from the game too much but don’t expect a visually appealing game.

The Gunk delivers a short enjoyable experience with an intriguing yet unoriginal story similar to games in its genre with a repetitive gameplay loop. Even with its flaws, the characters are what kept the game interesting in an ending that’s open-ended yet satisfying.

Being an Xbox Game Pass day and date title is a perfect platform for the game, as it is hard to recommend as a full-price game on launch day. I’d advise Game Pass subscribers who like the 3D platformer genre to at least try out the game as it does feel like it might appeal to anyone who enjoyed these types of games on the PS2, Xbox and Gamecube. Check out The Gunk on PC, Xbox One and Xbox Series X|S through Xbox Game Pass.