One of the most satisfying things to happen is solving a puzzle without having to look up the solution online. In an age where the answers are readily available, I’ve tried (and continue to try) to complete a puzzle without any outside influence. As I’ve gotten older my time has been limited to how much gaming I consume each day. With The Entropy Centre, I’ve found a balance of being able to solve each section and also do so at a pace that fits my needs as an adult.

You’ll play as puzzle agent Aria Adams, who has no idea how she ended up in a deserted and rather devastated research facility in the middle of space, where everything seems to revolve around solving puzzles and the imminent destruction of Earth.

Time to Save Earth

But fortunately, we quickly find a rather strange weapon what I’d call a massive but unfortunately monotonous-looking research facility. When you hold it in your hands for the first time, it turns out to be a cheerfully chattering AI assistant called Astra, with whom we can rewind objects in time. It might remind you of Portal and I don’t blame you for that comparison but this also means that few games can match the writing of Valve’s series. The Entropy Centre almost hits those levels but sometimes the hit-or-miss writing falters. 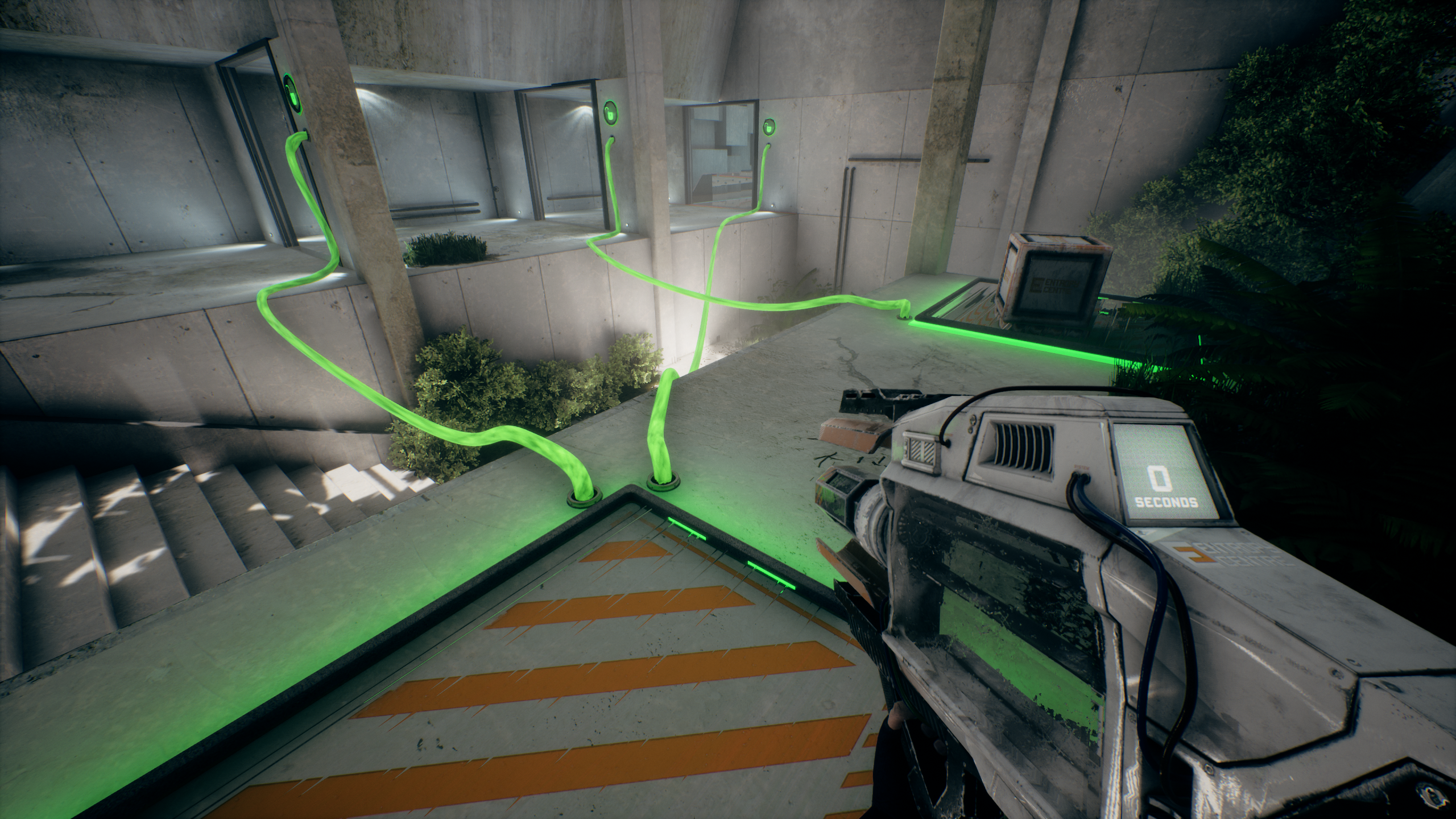 And with Astra, the fun doesn’t just start with the gameplay. The conversations between Aria and her new AI companion were fun, and I liked the interactions. While our freshly minted puzzle agent is understandably in a frenzy due to the approaching catastrophe, Astra makes flippant comments about Aria’s age, calmly explains the technical details of the system to her or holds a monologue about cats.

In general, The Entropy Centre does not take itself seriously and its witty dialogues reminded me of The Stanley Parable in several ways. With its humour, The Entropy Centre even managed to make us search all the rooms for switched-on PCs – even though we are absolutely no fans of quest logs. Here, the mail folder is always open, in which not only interesting background information about the research facility and a newsletter about cat facts slumber but also funny conversations between the disappeared employees. By the way, the humorous dialogues and texts are clearly the star of the narrative, while we perceive the story and its interesting premise of the end of the world more as background noise. But one that keeps us curious right up to the end. 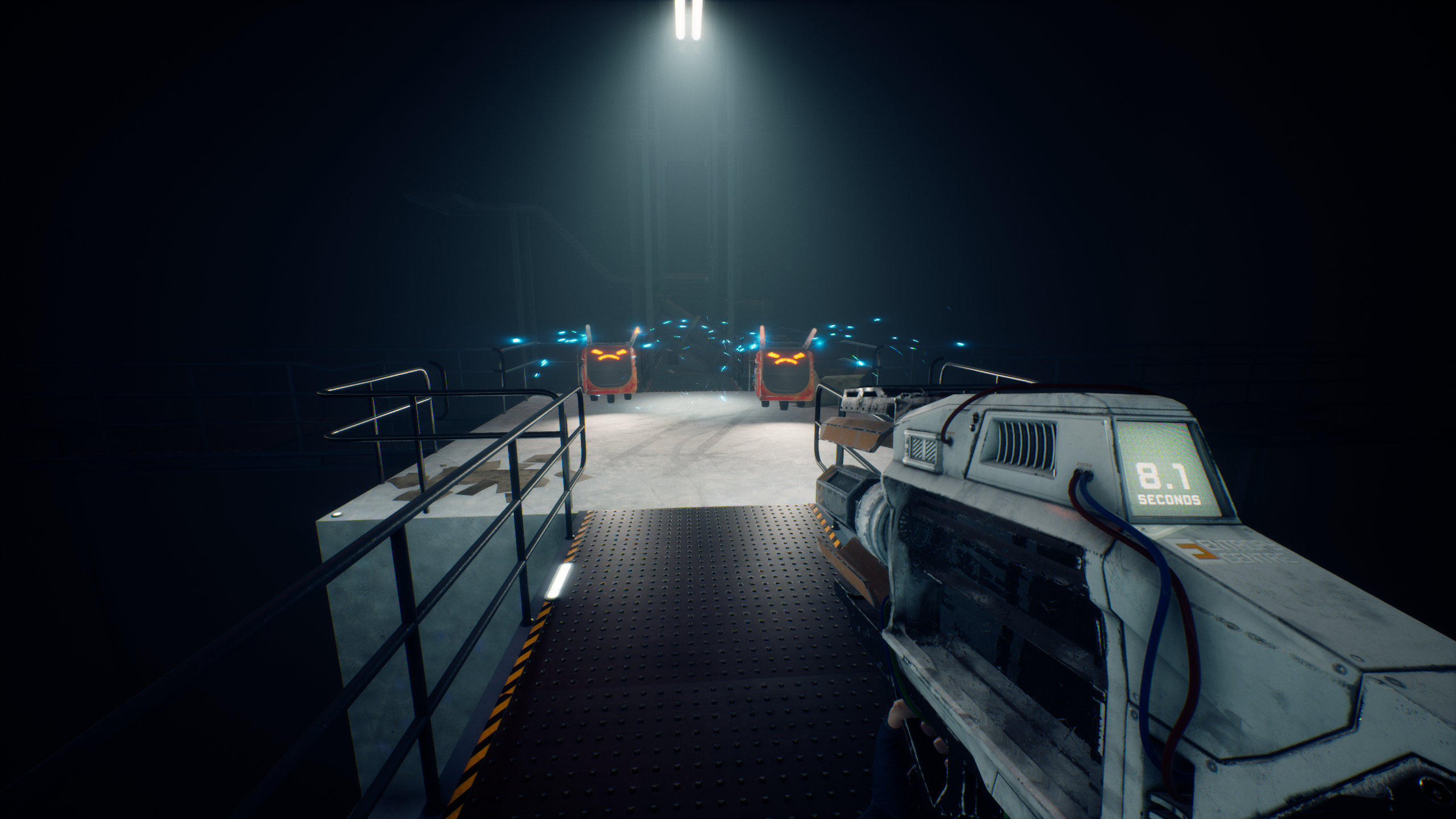 But there is a much bigger highlight in The Entropy Centre: the fantastic puzzles, which come with a highly motivating learning curve and, thanks to the gradual introduction of new puzzle elements, kept us motivated and having fun throughout all 15 acts. The linchpin of the puzzles is the temporal and spatial manipulation of objects such as boxes, jump pads, or treadmills. In theory, this sounds complicated, but it simply means that we are made to think backward to solve puzzles.

For example — To cross a puzzle room, we not only have to reach a higher door but also open it with a push button. However, there is only one jump pad in the room so you’ll hop up to the door, but how are we supposed to press the switch? To solve the puzzle, solve it in reverse and rewind the object in time. So, first, place the pad on the switch, then under the hill, jump up and then fire Astra at the pad, which moves backwards in time, floats back to its starting point and hits the switch.

Despite the fact that everything around you is falling apart and it looks like you’re humanity’s only hope of saving the planet, you venture into the test rooms first. Perhaps the local systems are hoping you’ll go through them and save everything. Maybe they just don’t know what they’re doing and keep repeating it over and over again, but you won’t find out unless you go for it. So you take the time weapon and head forward. 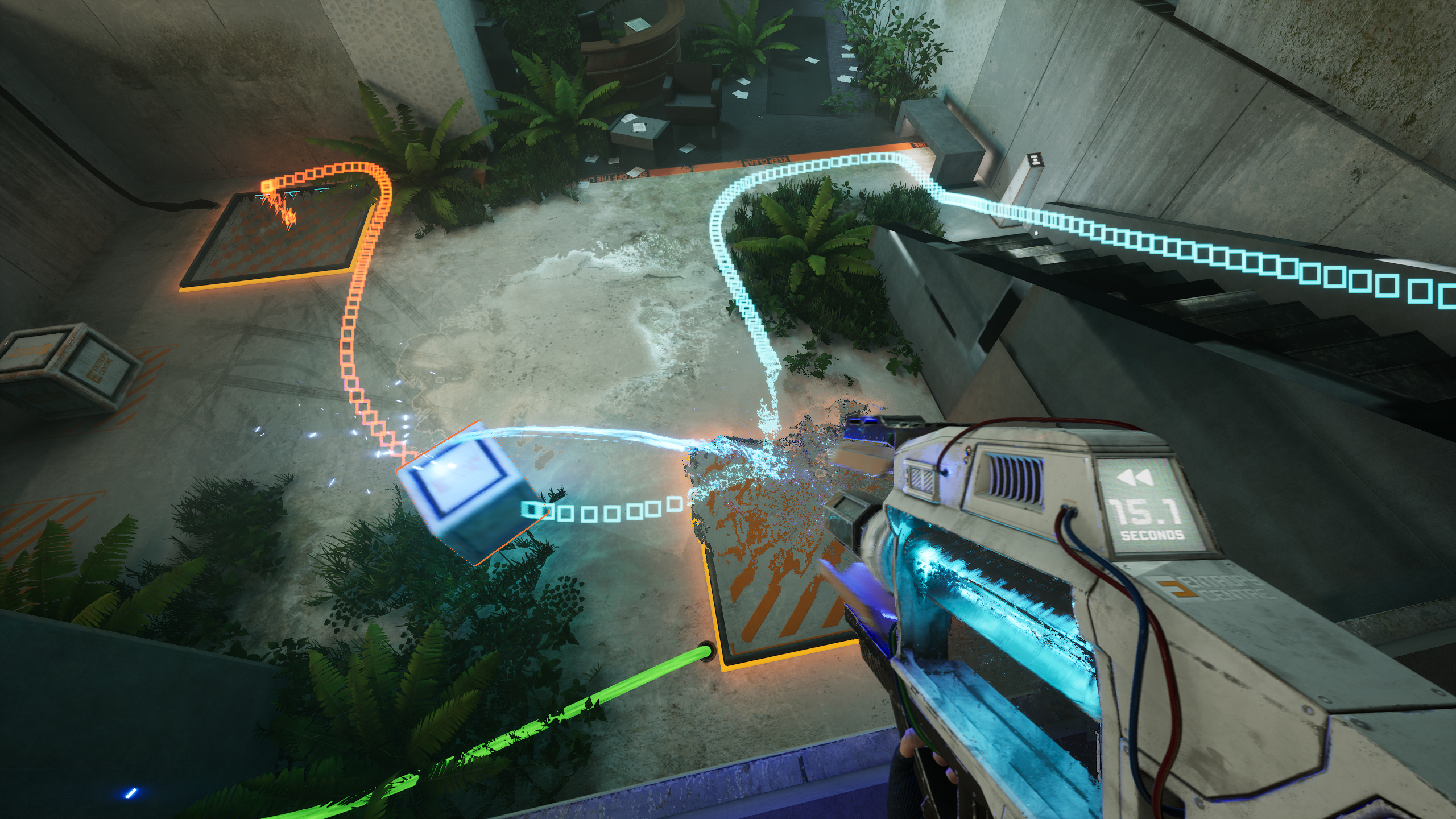 You head into rooms where you basically have to combine buttons and dice to get across the room to the other door. The problem is going to be that, for example, you have four buttons that open each door and only one cube to load it with. But you have a time weapon, so you have to think about how to move the cube in time so that the buttons get pressed and the doors open in turn. Because the time weapon turns back time. you always have to plan everything backwards. You have to manually take it from the last button to the first, place it everywhere and move it. Then, when you think everything fits, you point the time gun at the cube and you can gradually move it back in time. Each time it hits a button, you walk through the door, all the way to the exit of the room. This is just the simple basics, and of course, it gets progressively more complicated as you go along.

Gradually you get more elements and portable bouncing platforms, cubes with light bridges, cubes with lasers or even magnifying cubes are added, and sometimes you’ll encounter small annoying little robots that you have to avoid so they don’t kill you. You’ll have to combine everything tactically. The whole thing will be made more difficult by force fields, after passing which the time memory will be lost or the cube will change, and you’ll have to keep that in mind when figuring out your course of action as well.

At the same time, alongside the rooms, you’ll also get to different parts of the complex, where the story is partially told and you’ll have to figure out how to get ahead in them as well. Some of the structures are broken down and you have to reassemble them with your time weapon. Sometimes not completely, and you have to leave a platform stuck at a certain point in time so that you can pass through it. 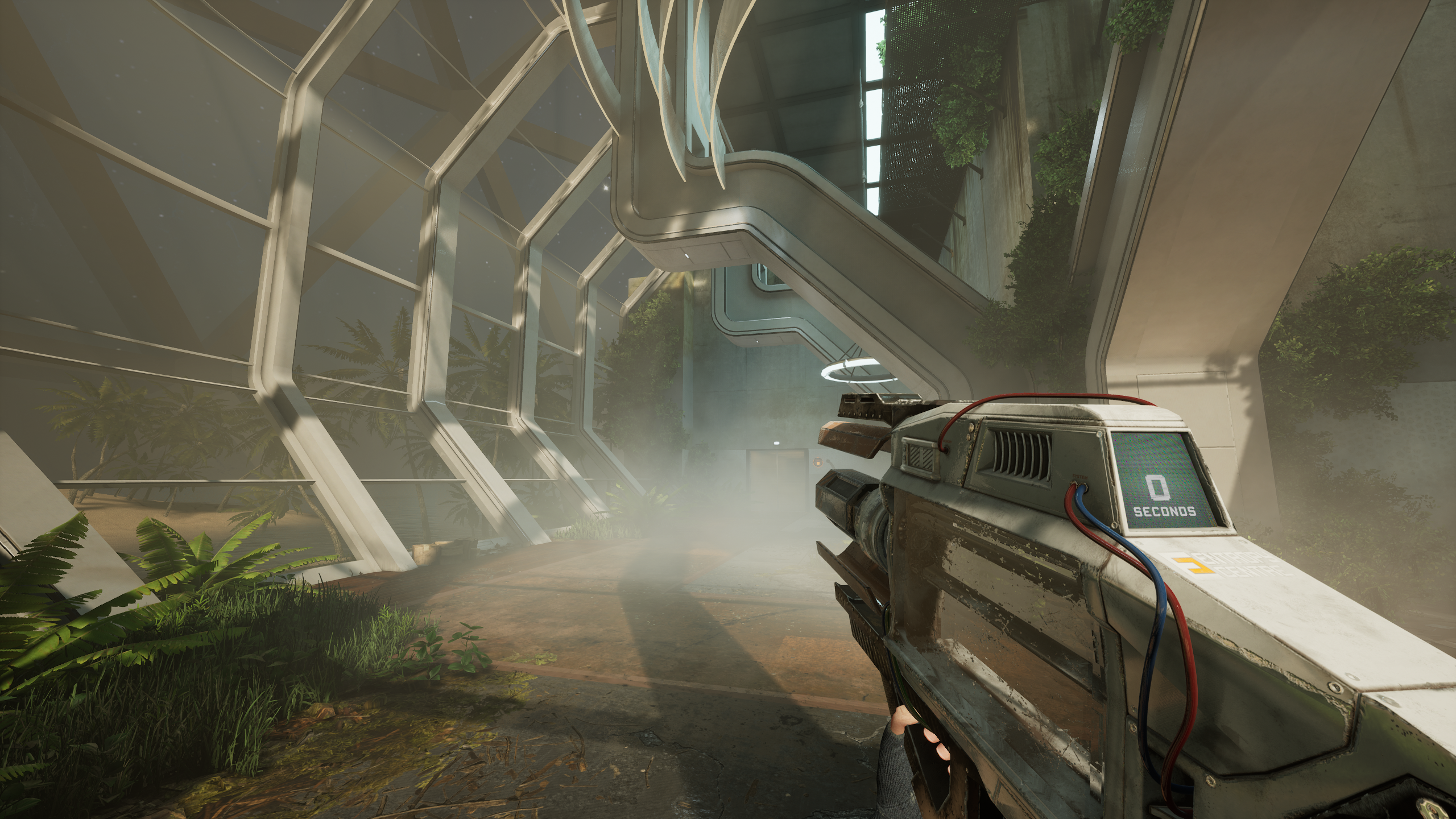 It’s all well-designed, interesting, and challenging in places, not just on logic but also on your nerves, especially when you plan a few jumps with a bouncing platform. You painstakingly fumble all over the place to create a path, and finally, once you’ve implemented it, you miss it on the last jump. At that point, you have no choice but to carry it all and plan it all over again. At the same time, it’s a bit of a shame about the story, which, while it starts off well, stalls very soon and leaves everything up to the room itself. Sometimes even the rooms have a pause in adding new elements. It creates such dead spots. But it also always depends on how well the puzzle elements go and how fast you go through them. Depending on your skill, it can take you 5 to 10 hours to complete the whole game. 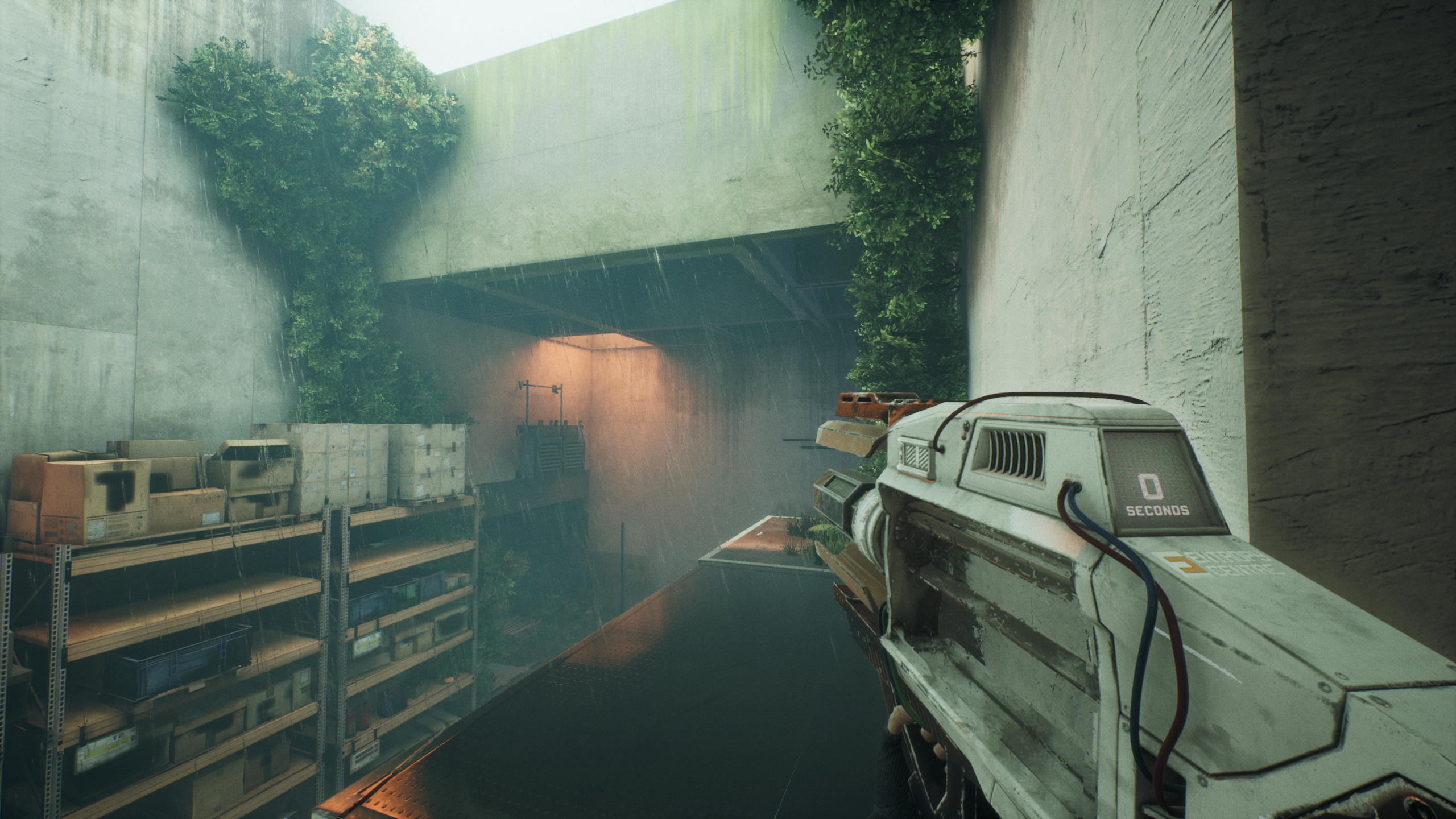 You can see how the developers have played around with the design of the complex though the inspirations are obviously pulled from Portal. The design of the concrete research center building in particular is very similar. However, the developers focused nicely on the quality of the materials, the destruction and overgrowth of the research center with vegetation, and you can see the ravages of time everywhere. Although personally I was bothered by the haze that was in the environments and the graphics, along with the post-processing, are not as clean as they could be. At the same time, it’s a shame they didn’t apply ray tracing and because they have plenty of reflections and nice lighting too, only screen space reflection is applied and thus the reflections are lost if you don’t look at the object being reflected. 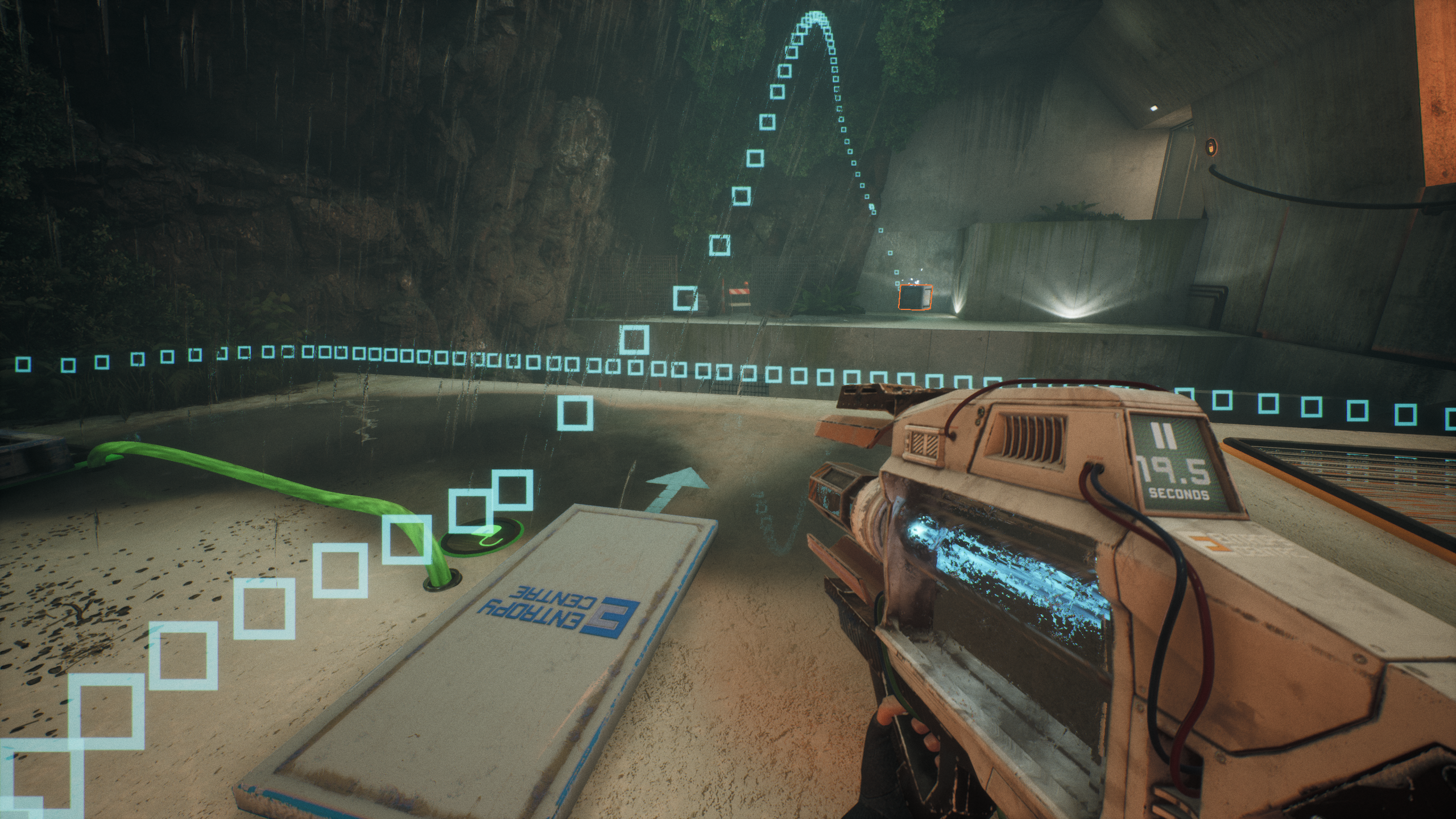 Overall, The Entropy Centre is a great puzzle experience and one that is filled with rewarding gameplay. Filled with well-designed puzzle elements, each puzzle is satisfying to solve on your own terms. The plot could perhaps have been tightened up more, both in its foundation and in the storytelling gradient. Though the fallout of the whole game, of course, depends on how you manage to navigate the rooms. If you liked Portal or The Turing Test, don’t skip this one.