The Divison 2 Warlords of New York is at home as being one of the best parts of the body of the modern work of Ubisoft. That sentence is written in the way I imagine fancy New York business-types would discuss the game over a fancy lunch at some old establishment on Pearl Street. Translated, it means the latest DLC/this-could-have-been a full-game is exactly what you’d expect from the massive gaming conglomerate. Yet, at the same time, it improves the formula just enough to make The Divison worth the investment again.

I think stock traders around the NYSE would be telling you this game is somehow both bullish and bearish. By that, I mean, Ubisoft Massive hasn’t taken things by the horns here and run the rodeo. The Division 2: Warlords of New York still follows the same format of pitting you against waves of enemies who have taken “insert local landmark here” from the fine people of New York or DC, and you must take it back. This time around, the formula is applied to everyone’s favourite baddies from The Division; only they’ve been studying your playbook.

Yet — much like a bear just out of hibernation — Ubisoft Massive has made a defiant roar as to what the future of the franchise can look like. The Divison 2 was very much a means to an endgame. But The Division 2: Warlords of New York feels like it could be a launching point for the inevitable third main entry.

This new installation does solve one of the biggest problems I had with The Division 2 — it tightens a story that flows worse than the Hudson. While The Division 2 did improve upon its predecessor’s technical shortcomings, the story was a convoluted mess that served no other purpose than delivering you to the endgame with the idea that you were doing something useful with your time.

I’m not going to spoil things in this review, but the story is often an area where The Divison franchise is a hit or a miss. Most of the happenings up until now have been told through a few opening and closing scenes, a myriad of optional collectibles and the radio chatter you get while running around. The game’s massive multiplayer RPG nature makes it harder to tell a story, but the developer has also done itself a disservice with the cliche and confusing handling so far.

The Divison 2: Warlords of New York does a fantastic job of telling its story by keeping it tight and focused. The first entry in the series built Aaron Keener up to be a perfect villain and then stole him away from the show — he hardly even showed up in the follow-ups. This game very much ties up the story of Keener and the first wave of agents. But I am a little worried about where we go from here. Ubisoft Massive has locked up the series’s story in a way where it could very well go through the same motions all over again. So here’s hoping that the restaurant showed here continues.

By now, you’ve seen the memes and fanboy post lamenting the lack of blinding snowstorms in The Divison 2: Warlords of New York. And while the lack of snow does make aiming much more straightforward, it’s quite disorienting to see the Christmas decorations still lighting up in some cases. I particularly enjoyed how unnerved I was when the soundtrack to my hostile takeover of a checkpoint inside of a hotel was an absolute bop of a Christmas tune playing over the hotel’s public address system. Mind you, DC was in quite a similar state of decoration in The Divison 2, but we can recall what New York looked like just after the spread of the infection, so it’s a queasy feeling looking at it all these months later.

The game also very quickly informs you that New York was subject to a catastrophic hurricane, which has left much of the already flipped over districts of Lower Manhattan muddy and muddled. I’ve found myself funning aimlessly through the many winding streets taking guesses at what’s manmade destruction and what’s natural.

The Divison 2: Warlords of New York further improves what UbiMassive has already done so well in creating highly-detailed cities, but the developers also enjoy an immense amount of freedom to imagine how the devastation and natural destruction have impacted the environments. The Division 2: Warlords of New York shows this above and beyond with its estimation of how time — and a storm — has blemished Lower Manhattan.

Division 2: Warlords of New York also improves upon passing outside missions. One of my greatest upsets with The Division is how it makes fetch quests and gear grinds and affair that’s all over the place. The Divison 2’s campaign felt like it was a disjointed jaunt of doing things to improve life for those in the settlements until you were strong enough to take on the baddies in their homes and take back the capital. The Division 2: Warlords of New York passes out a handful of exciting side missions that have you putting a halt on Keener’s progression on making the second virus he secured in The Divison. Instead of feeling like they are there to get you ready for the endgame, these side missions feel like they are an aside to keep you going between killing off the rouge agents.

One of the biggest early disappointments in The Division 2: Warlords of New York is its gear revamps. Your high ends and exotics from Washington are likely going right back into the stash the moment you step into Manhattan again. This can be a little dastardly at first. But bear with the game because the new loot system is a vast improvement.

The new UI layout for weapons and armour makes it very clear what new additions to your arsenal will do in terms of improving your outputs. There also new stats called god rolls that will come on weapons you’ve hunted and farmed for. While these god-tier stats won’t always appear on the best of weapons, you can simply break the weapon or armour down, store the stat and then apply it to gear of the same type that you’ll pick up on your travels. It’s a new skill that is sure to have you flexing your thinking muscles to find the right amount of show-stopping muscles.

The Division 2: Warlords of New York is the perfect balance of being the same but different. In many ways, it has corrected the Ubisoft formula for games. Do not get me wrong, like the prototypical investor on Wall Street,  it does not play things far from its chest. Ubimissive continues to have the series jump through the same hoops. But they’ve tightened the performance up to make it feel less contrived. 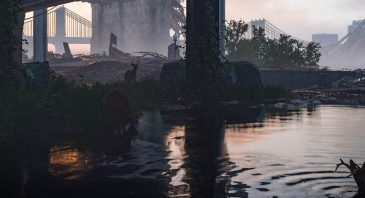