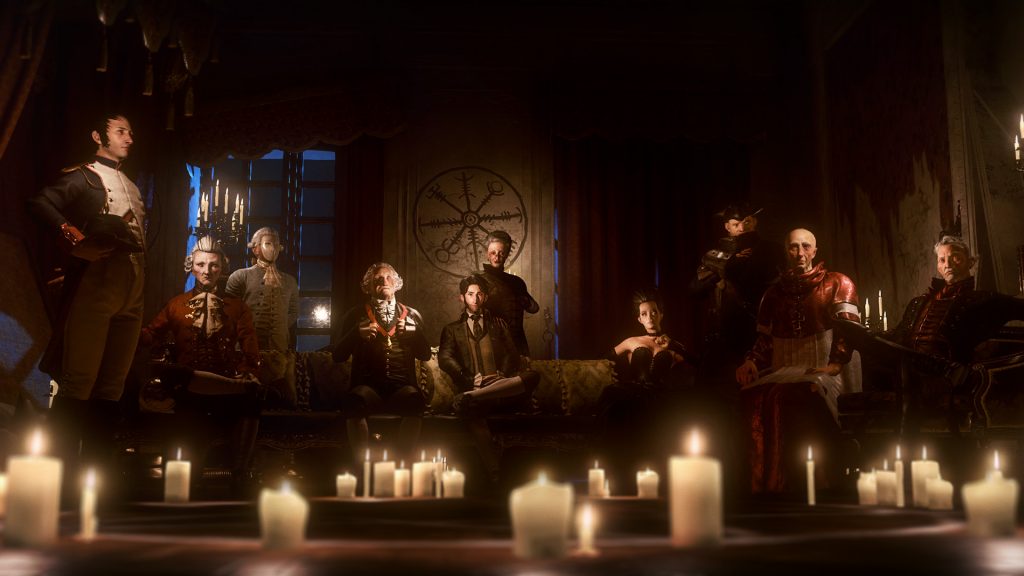 Checkmate is the fifth and final episode that will conclude the adventures of Louis De Richet within The Council. This narrative driven adventure has showcased the importance of dialogue and how a player’s choice can drastically alter the timeline of how events played out. We have experienced lies, treachery, uncovered secrets, and even investigated a murder after being welcomed into the mansion of Lord Mortimer on his secluded island.

Checkmate begins with the onset of the final gathering of the conference, but Lord Mortimer first requires your assistance to persuade the opposing members to switch loyalty and join his side. You are then tasked to arrive at the rooms of each individual and engage in conversation with the hopes of altering their mindset through narrative manipulation. However, arriving at Manuel Godoy’s room presented no dialogue selections and was instead a short cutscene where he quickly agreed and offered his support to Mortimer. This was the first example of the final episode being rushed as this interaction gave players no narrative interactions with Godoy. Shortly after interacting with other guests, Johann Von Wollner was the remaining individual that needed to be persuaded. I stumbled upon him talking to Sir Gregory Holm and was quickly told to vacate the premises as they were waiting for the arrival of Godoy. I then revisited Godoy in his chambers and another cutscene takes place where you gain control of him through your mind control powers that were previously acquired. Here was another missed opportunity within the episode as you do not engage in the mind control process, or control the movement of Godoy as another cutscene immediately places you arriving at Gregory and Wollner to carry out a conversation that will decide the ultimate fate of the conference.

The conclusion of the conference results in additional actions taking place that force Louis to switch loyalty back and forth between Mortimer and Gregory. This decision is tiresome as you have already devoted so much time and effort into deciding which path you wanted to follow only to be told that all of your hard work was for nothing, depending on which actions were taken throughout the previous episodes.

As you continue to be pulled deeper into the struggle between Mortimer and Gregory, solving puzzles will lead you closer to the light and the freedom from the evil interactions of the guests on Mortimer’s private island. First you are asked to reorganize the guests according to their affinities, which was more difficult due to the lack of available royal jelly in order to utilize your skills gained over the previous encounters to have key information revealed to make the sorting easier. This trial and error method will require patience and an allotment of time to uncover the correction positioning. The second major puzzle of the episode deals with selecting the proper order of memory segments that are depicted within canvases scattered across the catacombs. You must first understand what is occurring within each painting before making your selection. Each unsuccessful choice will also remove the previous selection, forcing you to run back and forth within the catacombs. The puzzles in Checkmate are at opposite ends of the spectrum in terms of difficulty as they are not balanced properly to keep the player intrigued as the conclusion of The Council unfolds.

The same visual issues persist within this final episode where certain character animations twitch and dialogue is given when there is no lip movement, resulting in the loss of an immersive atmosphere. It is unfortunate that these animation issues that presented themselves in the first episode were never corrected for the remainder of The Council. The final minutes of the episode reveals some shocking revelations, but information and items from previous episodes such as the Lance of Longinus also come into play and you are finally able to see if your attention to detail paid off with choosing the correct spear. Decisions are made alongside guests who were once enemies, and it is through this joint effort that the conclusion of The Council unfolds. A constant thought throughout the experience is not knowing what path the story would take if different choices were made during the conversations with guests. However, this greatly benefits the replayability aspect as players can relive the entire experience, choosing different resolutions to uncover what other storylines may arise.

While the final episode, Checkmate, does not offer a memorable experience as the previous episodes did, The Council as a whole is successful in creating a narrative adventure that keeps the player captivated throughout each episode, solving the many mysteries that arise within Lord Mortimer’s estate.