The good ‘ole days of couch co-op are sadly for the most part, behind us with modern gaming. One of my fondest co-op memories was a sleepover at a friend’s house, where we began playing Rampage 2 on the Nintendo 64 around 10 PM. It eventually got late, so we paused it and left the console on overnight. We managed to wrap up the last 20 or so levels immediately after breakfast the next morning. It was fun, rewarding, and amazing finishing Rampage 2 with four people the whole time.

I didn’t have that same experience with Terror of Hemasaurus (I played it solo) but I did experience a game with a similar feel, a more adult-oriented sense of humour and violence, and a great mix of gameplay that builds off of classics like the Midway arcades from the ’80s and ’90s.

The Real Terror, Is Us

Terror of Hemasaurus is full of commentary about humans’ inability to react to saving the environment and taking climate change seriously It then tosses in a fresh dose of humour on the state of the gaming industry, and certain news agencies in North America and how they cover the world around us. Sure, that all sounds deep and all-too-real, but developer Loren Lemcke uses these as jumping-off points for a game that ultimately comes down to terrorizing cities and destroying as much property as possible. Check out the video above for a couple of examples. 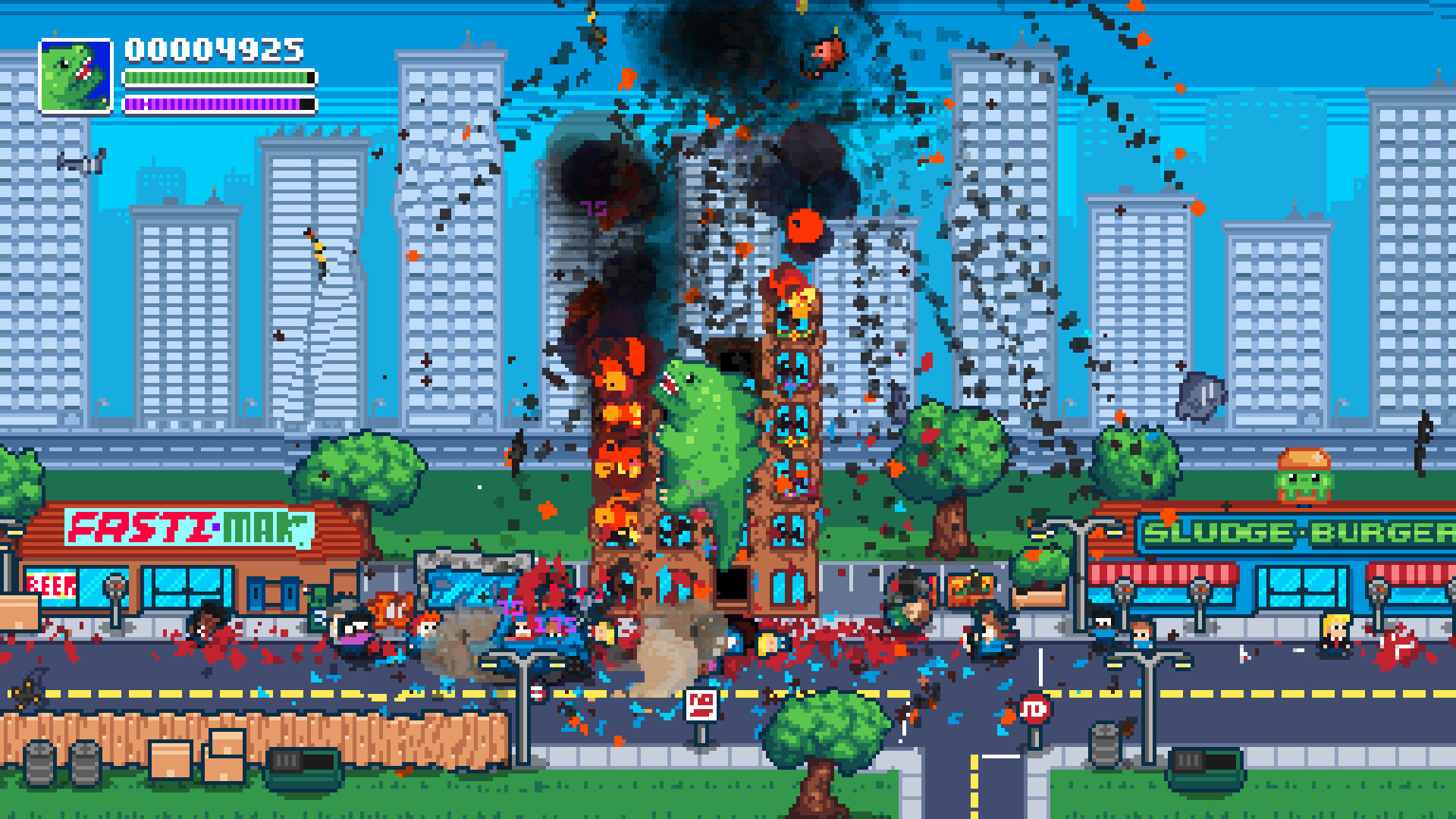 The core experience isn’t really about the story, but I did thoroughly enjoy the commentary that came from the cult that worships the Hemasaurus, to the greedy gazillionaire big bad. This angle helps differentiate itself from inspirations like Rampage, where those games were simply just about destroying as much as possible, as quickly as possible. 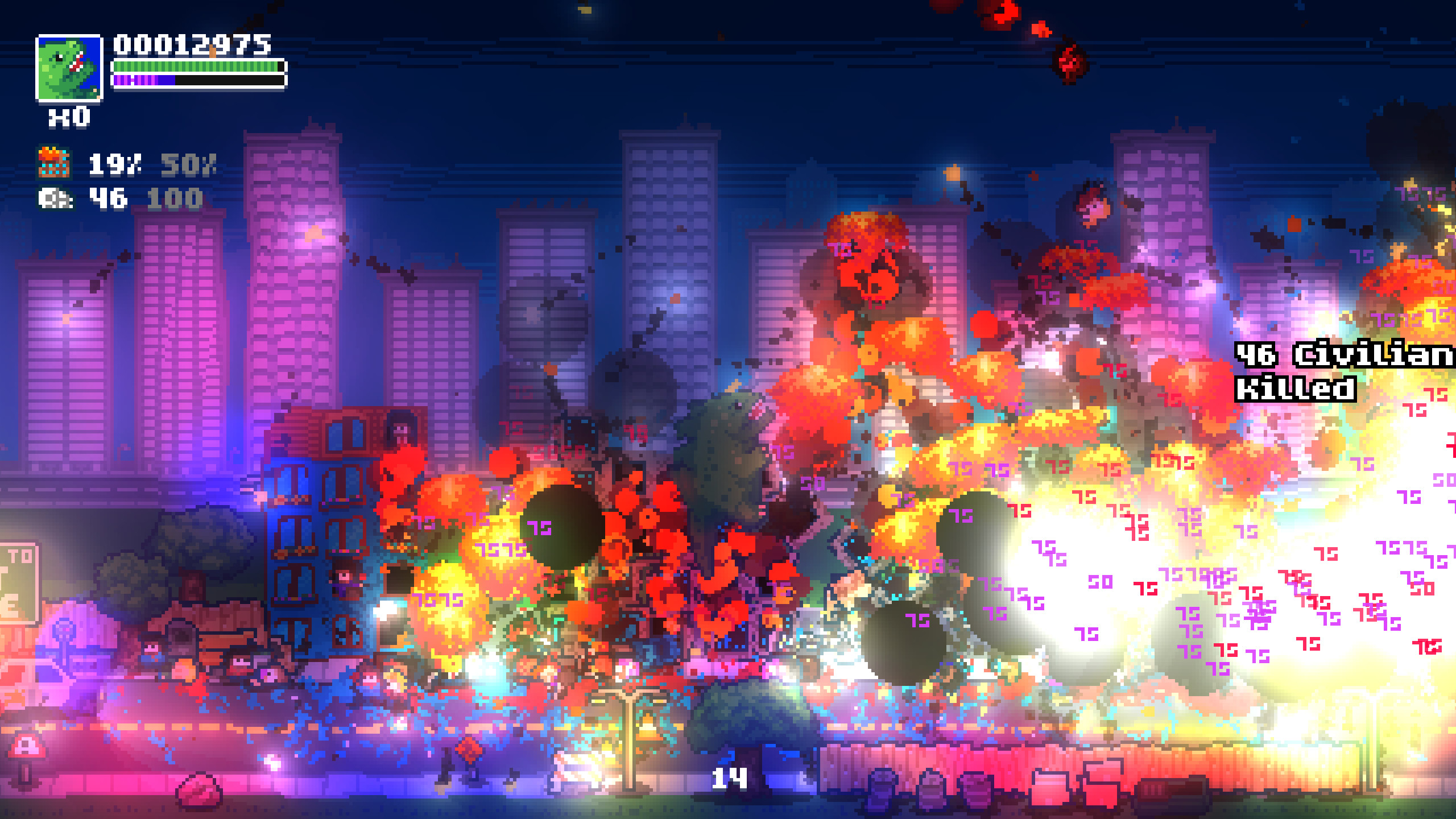 Terror Has Many Forms

Terror of Hemasaurus gets going quite quickly. You’re transported to various cities throughout the game; all part of the three chapters and 23 stages you’ll play through. Right off the bat, you have the choice of playing as one of four monsters: the Hemasaurus, a Mech-Hemasaurus, a giant salamander, and a massive sloth. To start, they all control the same way, but once you’re able to bust out your special ability, more variety is immediately available with a single button press. Each monster has its own that range from fire-breathing, to a huge shockwave that pushes vehicles and crushes a building’s foundation. A great addition from the get-go is that you can back out of a level, replay them at any time, and experiment with each monster, all while keeping an online leaderboard based on your score and time. 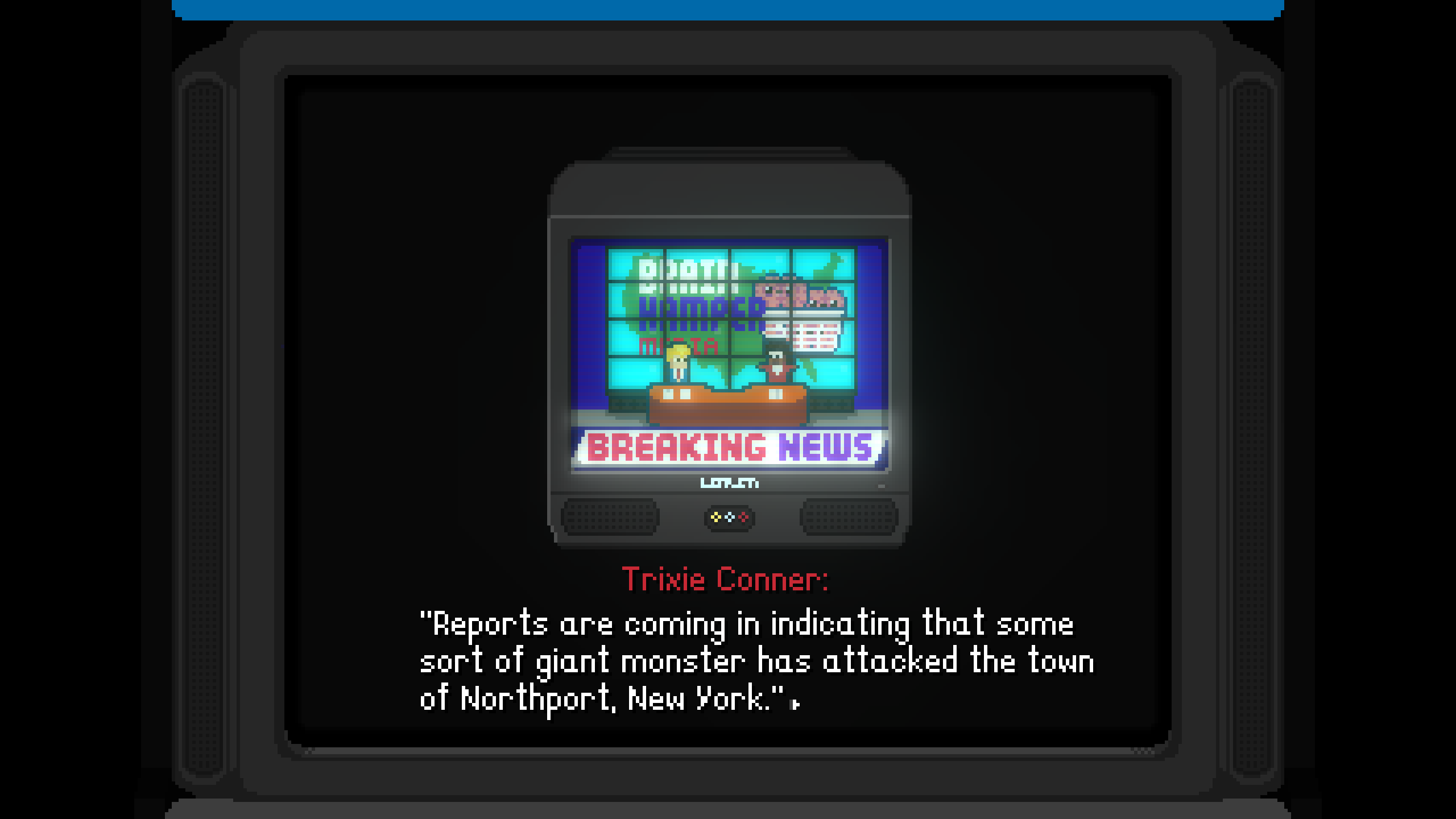 The general conceit of the Terror of Hemasaurus is to demolish a certain percentage of each city. You can jump and climb on buildings and chip away at them until their pixelated structures fall to the ground. The most fun I had, was finding the tallest high-rise on the block, breaking its foundation, and watching the Jenga-like pieces fall into neighbouring towers to create a domino effect. This is a blast to do, and it’s not the one and the only way to do things. Terror of Hemasaurus lets you kick cars around that will smash and explode when hitting a building. Or once the news cameras pick up on the destruction, why not climb onto the choppers and crash them for maximum damage. I felt that no matter what city I was tackling, each available option was fun and easy to execute. 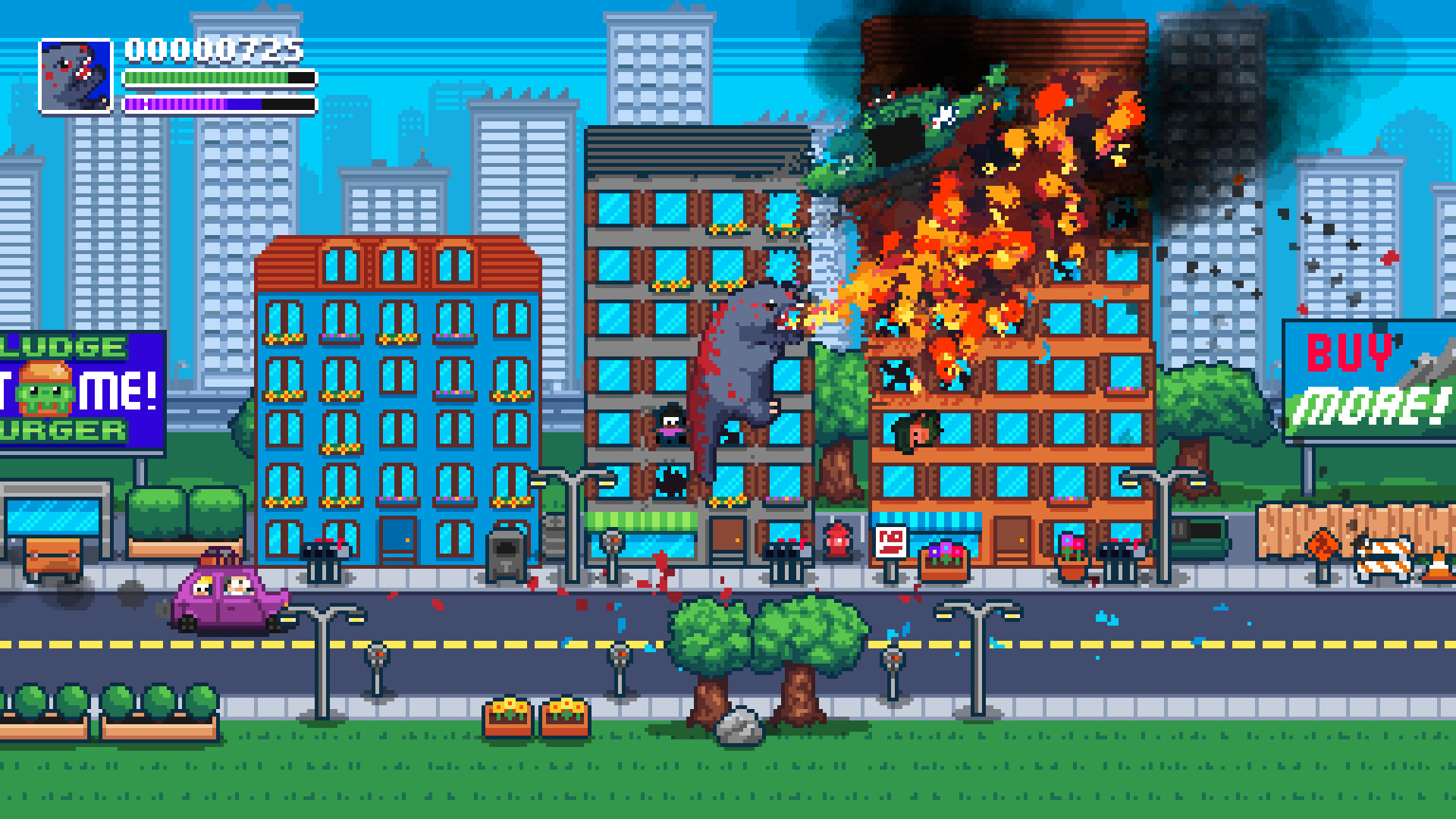 There are also some quick and fun bonus levels and objectives thrown in there along the way. The most random, and hilarious example comes when the game gets really meta and Lemcke himself presents Terror of Hemasaurus to gaming executives. To offset the violence, they ask him to create a stage where the monsters will cuddle with cats and dogs. You then go on to play that very stage. Oh, there are also giant trampolines, tanks, and huge bowling-like balls you can kick around, just to make things even weirder.

Terror of Hemasaurus goes right for the early 90s feels and grabs them by the horns. Just like Lemcke’s previous game Super Blood Hockey, the art-style and sound effects feel like they’re coming right out of your 20-inch RCA tube TV with an NES hooked up to it. There are a ton of pixel graphic indie games on the market, but I still find the mix of crazy crashing sound effects and the style of the characters in this game to be unique. Rampage was a hit in the 90s, but it never looked and felt quite like Terror of Hemasaurus does. 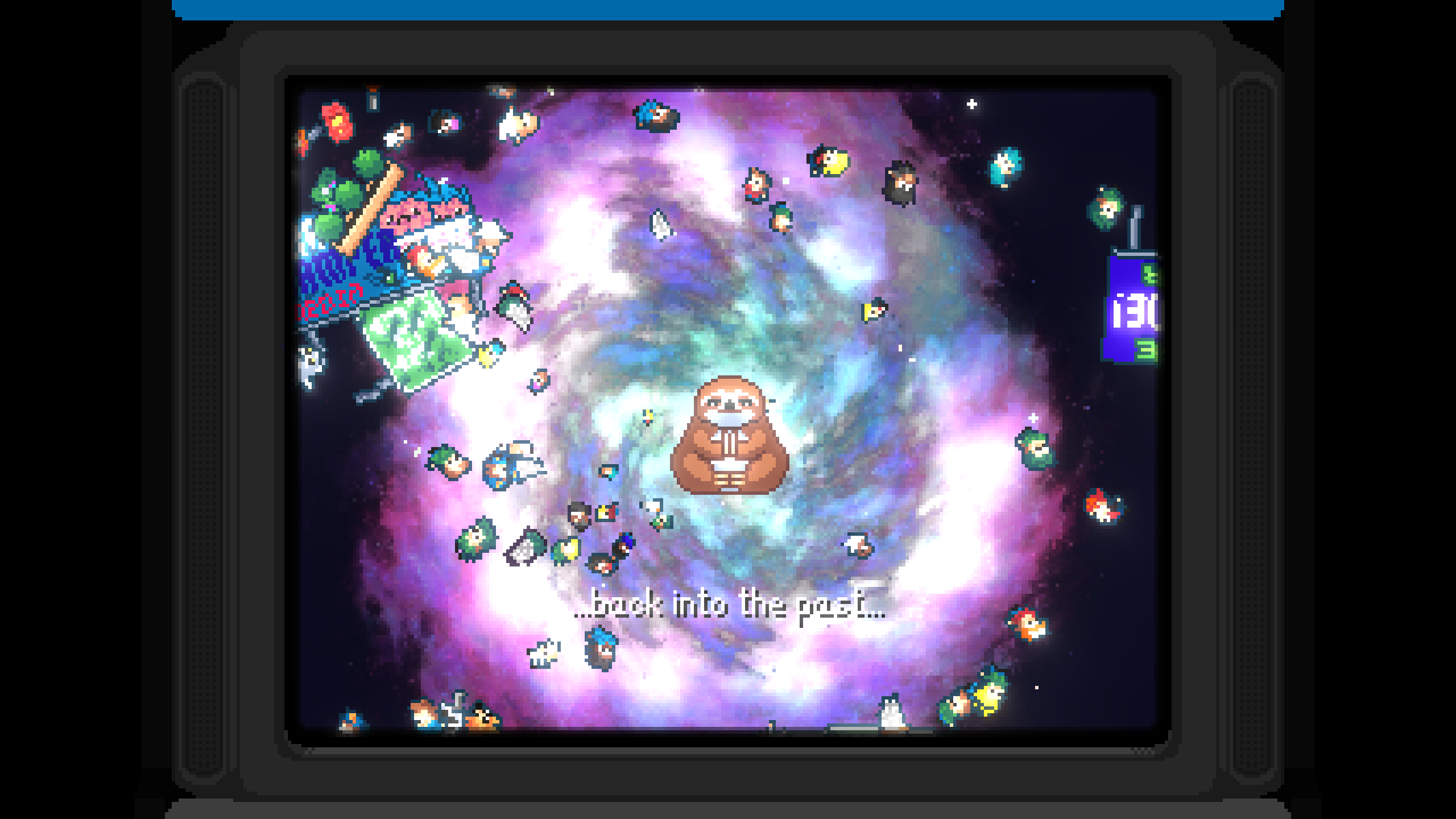 There’s a lot to love about this title. I enjoyed every aspect of the dark humour, art style, and gameplay. Terror of Hemasaurus is not a long game. Still, there are many opportunities to enjoy it beyond its 3-4 hour story with an endless mode or replaying story levels in order to top the leaderboards. Regardless of which monster you use and how you decide to crumble each city, this game will surely put a smile on your face as you topple building after building with satisfying results.

For now, the game is available on PC but the developer says console ports are scheduled for December of 2022.