Review: Sword of the Necromancer

What would you do to bring your loved one back? Would you commit the taboo of bringing back someone from the dead to the realm of the living to feel less guilty about not saving them? Well, Sword of the Necromancer asks that very question with a definitive ‘I would do everything’ answer very early in its story.

I honestly did not know what to expect from the game or know exactly what it was. I realized quickly that Sword of Necromancer was a rogue-lite type of game, which is a genre of games I don’t have a lot of experience with; I’ve played a lot of Rogue Legacy and that’s about it. 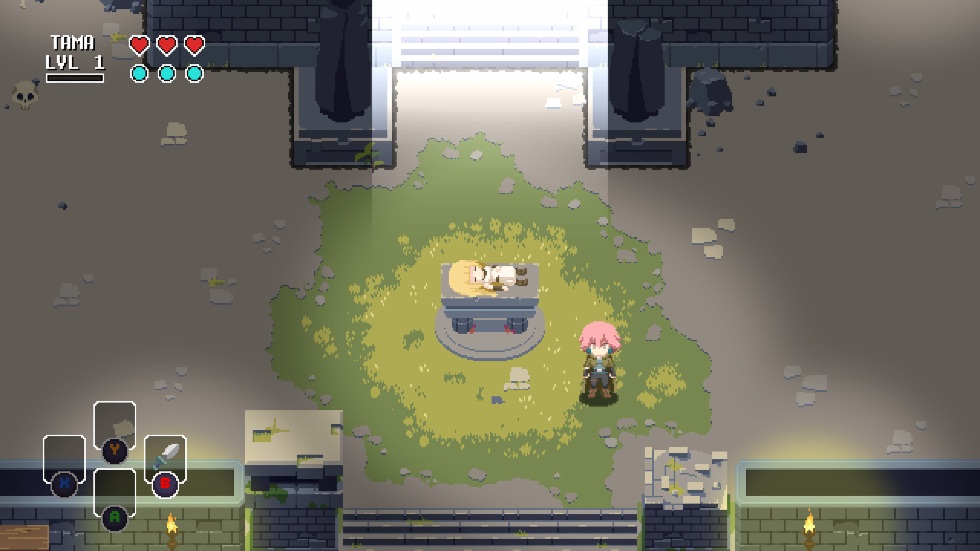 Getting into what exactly the game is, Sword of the Necromancer is a dungeon crawler action RPG with rogue-like elements and an anime art style. The game plays a lot like a top-down Legend of the Zelda game from the past with modern game mechanics, level progression and a quasi in-game party system of revived monsters. Sword of the Necromancer was kickstarted back in April, which accumulated 1300% of its initial goal in funding.

An Innocent Start to a Journey that turns Dark

The player is put into the shoes of Tama, a female thief turned bodyguard who is hired by the future high priestess of the Nodam religion, Koko. The two met each other when our main character broke into the Temple of Nodam, Koko’s home. After learning about each other, Koko proposed going on a journey.

Koko wants to explore the world while learning more about it and how people truly live. The Zelda looking character has been secluded all her life, she’s only read about the world while being bred to take up the Nodam priestess position when the current priest, her father, passes on. 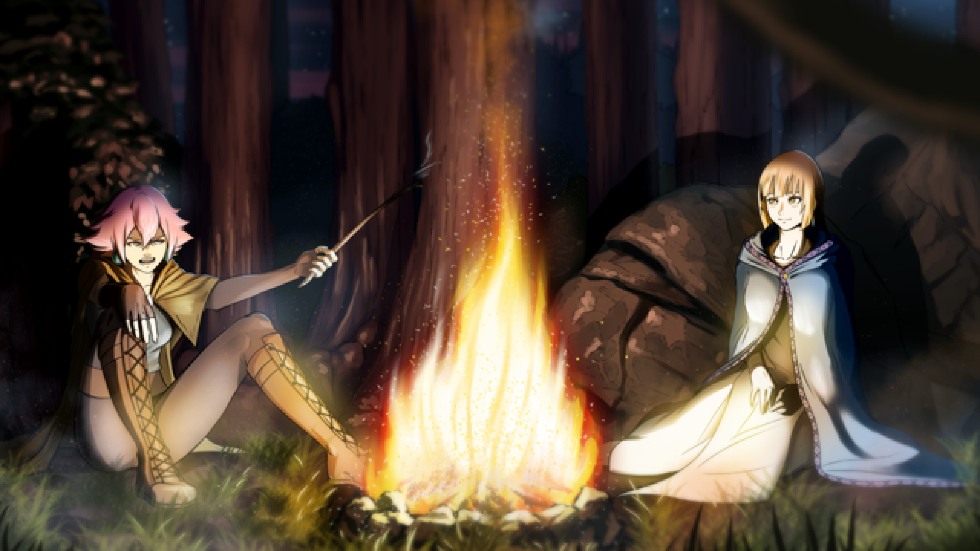 She feels her father is not truly helping or making a difference for the people that come to the religion for help. She wants to make a difference but sadly she dies before the start of the game, which doesn’t go into the exact details.

The game starts with Tama carrying her dead body to the necromancer crypt after hearing a legend of a tool that could grant immortality and even bring back the dead. That tool is the titular, Sword of the Necromancer which Tama easily finds and uses.

Revive your Enemies to Fight for you

After defeating any monster you can easily revive and have them fight for you, the sword only lets you team up to three monsters. The limitation is tied to the inventory you can equip in the game, so when you revive a monster it takes up one of four slots – your necromancer sword takes up a permanent slot – which you can switch to with your controller’s four face buttons. The amount of inventory was limited during my time playing the game but the developer, Grimorio of Games, has patched the game to increase your character’s inventory from four to eight. 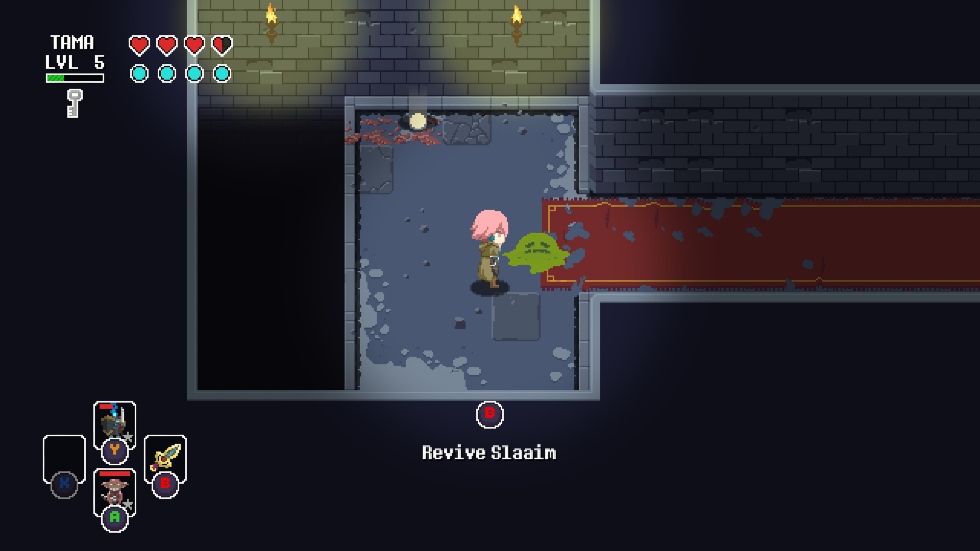 When you make it back to the crypt’s hub where Koko is lying lifeless in the middle on a stone bed, Tama tries to revive Koko but it doesn’t work; it’d be a very quick game if it was that easy, huh? While frustrated, Tama hears a voice from the door to the crypt’s deeper levels, they tell her to truly revive Koko she must find out how by diving deeper into the crypt.

All of that was just the prologue, once you dive into the procedurally generated dungeon is where the game starts. If you’ve ever played any of the 2D Legend of Zelda games, you know what to expect, you get into a lot of room with enemies that want to hurt you. Enemy types include classic monsters like slimes, bats, dullahan, goblins and so much more; the more you play the more you’ll different colour types of those classic monsters.

On every floor, you’ll get a chance to get an item out of a chest in one of the rooms. Chest items are completely optional, they are not integral to the dungeon-like The Legend of Zelda games; you can get a weapon that does better damage than your necromancer sword, bow, a stat booster and much more.

To proceed, your character must procure a boss key, which you’ll find on a slightly stronger enemy in the procedurally generated floor. Each floor has its unique boss you have to face to get lower into the crypt.

It’s the usual formula you expect from those types of games but with a rogue-lite twist. When you die you lose a couple of levels you earned during a playthrough and start at the very beginning of the dungeon, which is now an option in the settings. Thanks to a patch, the game now lets you restart from the previous dungeon – if you clear multiple floors of the dungeon – instead of the beginning. That makes the game way easier because restarting from the beginning after progressing through three or four levels was a bit depressing, a lot of progress was lost multiple times.

One of the cool things about Sword of the Necromancer is the very idea of reviving minions to fight your battles. There were times I just let my monsters fight all my battles as I looked on from a distance as the rogue general I am. It gave me this odd level of satisfaction as the game’s monster AI fought my battles, who can also level up the more you use them. If they survive long enough you can rank them from bronze to gold, each ranking replenishes your monster’s health and a stat boost.

A Human Story in a Dungeon Crawler

One of the more enjoyable aspects of the game is the story, which does a very great job of showcasing Tama and Koko’s relationship through Tama’s internal monologue in flashbacks. The more you progress through the crypt, the more you see of those interactions while getting an understanding of how Koko died. The characters are voice acted very well but sadly you only see the characters through visual novel style static images instead of actual expressions in animated cinematic cutscenes.

One enthralling part of the story was Tama’s motivation to bring back Koko, while generic in storytelling it hooked me. As someone who wishes they could bring someone back who isn’t here anymore that part of the game spoke to me, it’s the most human element I’ve seen any dungeon crawler I’ve played in recent memory.

While the art style feels very anime-inspired, it doesn’t take away from it. The opening is very well animated, but it’s the only cinematic animation in the game as the character interactions are told through text and audio with a static image.

From the many hours I’ve played/replayed the procedurally generated levels, Sword of the Necromancer is overall a good game that I got some enjoyment out of. It’s not a game I necessarily loved but I didn’t dislike it at the same time. I struggled to get into the rogue-lite aspect of the gameplay loop at times because it didn’t hook me as much as liked but rogue-lite fans might get a lot more out of it than I did.

The game has an enticing story told through flashbacks and its relatable main character. Its gameplay is fun in a ‘Legend of Zelda‘ kind of way but the rogue-lite elements feel tact on to extend the player’s time with the game. Being able to revive monsters to fight on my side is a unique gameplay mechanic I loved to use, especially using it strategically to advance your rogue general led monster squad. Grimorio of Game did a really good job putting out a unique take on the dungeon crawler genre.

Sword of the Necromancer is currently available on PC, PS4, Xbox One and Switch.