Review: Sword and Fairy: Together Forever

Sword and Fairy is likely a game franchise that most RPG fans may not be too familiar with but is fairly popular in its home country of China and has been going on for almost three decades exclusively in Asian markets. Until recently anyway, that all changed with EastAsiaSoft handling publishing duties to bring the franchise officially to the west starting by localizing 2015’s Sword and Fairy 6 which was released on PC in 2017 and PS4 in 2019. The series is based on Chinese mythology and its presence in the west continued with the seventh main entry, Sword and Fairy 7 known in the west as Sword and Fairy: Together Forever which was just released on PS4 and PS5 consoles this week following its PC launch back in October 2021.

The Seventh Entry of a Popular Chinese Game Series

Now, this is a series I understandably have no actual history with given that most games in the series haven’t been officially localized in the west so the chance to review this game was an opportunity to try and get into something new in the RPG genre. While I do have some criticisms of the game, at the end of the day I had a positive experience with Sword and Fairy: Together Forever. Going into the game, I had an idea that Sword and Fairy might be China’s Final Fantasy with each entry being a standalone story. That’s not entirely a one-to-one comparison (but still totally fair, there is even a “snowboarding” section in it like in Final Fantasy VII), from what I could find – each game strives to be a standalone story the series does take place in the same world, unlike Final Fantasy. The impact on the other mainline entries is not directly felt or referenced though, the developer approaches this game with a standalone experience in mind. In my experience, that is true with the seventh entry seemingly like past games but there is a main character from a past game that plays the supporting character role this time around but they aren’t all in your face about their past, actually, they are pretty secretive about it to make the focus on the current main characters. Sword and Fairy: Together Forever does a good job making each of the four main characters unique in its art style and stand out with their personality, the more I played the more I appreciated each of the main and supporting characters.

Speaking of story, the game kicks off in the demon realm as players are put into the shoes of Xia Wu, a god-like character known as a deity in the lore of Sword and Fairy who is on a mission from his superior. Aoxu from the Deity Realm. It’s during this sequence that players get a tutorial of Sword and Fairy: Together Forever‘s gameplay mechanics which are pretty robust, more than I thought going into it. Players get a small taste of how overpowered you can be in the early game but it doesn’t last too long as Xia Wu fails his mission and his powerful weapon, Chunzi Sword is taken away during a one-sided fight with the Demon Lord, Chonglou. Afterward, what’s left of Xia Wu is sent packing to the Human Realm after his battle with the Demon Lord. 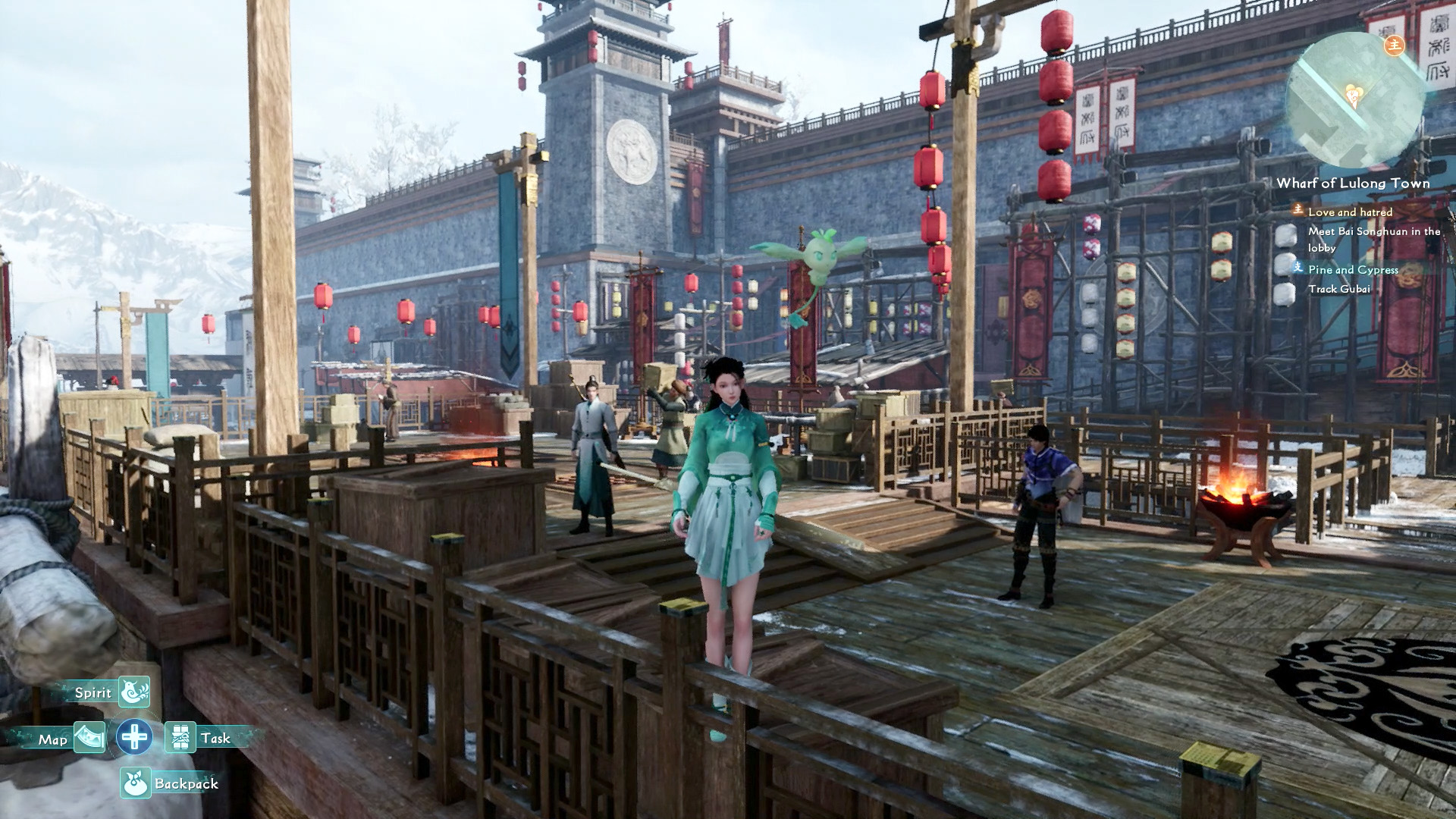 Following that, we are put into the shoes of Sword and Fairy: Together Forever‘s actual protagonist and heroine, Yue Qingshu. She is the oldest and at this point in the story the only disciple of the Mingshu Sect which is an immortal cultivation sect that helps citizens with protection from monsters and specializes in the art of spirit control. Noticing an unusual uptick in monster violence leads to Qingshu and Xia Wu finding each other in unique ways which kicks off a huge narrative involving all three realms.

As the player makes it through the game’s story, more party members and spirits will join you on your journey while unlocking new abilities that will help take down the tough bosses that will try to stop you which include hard-as-heck god-like characters. Throughout the whole narrative, my favourite part was the part members’ interactions with each other and the reveal of their motivation/backstory that was told in a way to serve the story. Players will explore a variety of environments including the greenest of forests, the snowy mountains, a huge valley, a civilian-filled town, and even the Demon Realm which you can fast-travel to by flying on the back of Qingshu’s trusty thunderbird spirit companion, Qiaoling. Sword and Fairy: Together Forever‘s narrative was one of my favourite aspects of the game which felt more like a romance than a ‘let’s save the world’ kind of story which is still there but it isn’t quite the main focus which is breath of fresh air. I also enjoyed the direction they took it with the expectation of these heaven-like characters being the good guys and hell-like characters being the bad guys, the writers of this story definitely took that idea and flipped it on its head with the reveal of the game’s puppet master antagonist. While no spoilers, I found the ending to be a little sad while the goal was accomplished there were stakes involved that had to be paid in the end which is directly related to a previously mentioned aspect of the game. Sword and Fairy: Together Forever‘s gameplay is familiar to anyone like me who has played a lot of action RPGs like the most recent Witcher, Final Fantasy, Kingdom Hearts, or Soulborne games. When getting into combat you can attack enemies with either light or heavy attacks which you can combine between the two combos, you can learn new ones throughout the game. Players can also use the right trigger to reveal two wheels of four abilities, a grand total of eight that use MP, which can be replenished little by hitting enemies or using MP items. Combat and dodging feel good as the obvious inspiration of similar games is felt so the gameplay really feels like riding a bike.

Upgrading to the Best Gear Will Only Help

As you go through the game you will earn experience and gold, the latter of which is really important as you can use it to upgrade to better weapons, armour (upper body, lower body, and footwear), and accessories for your party. This is an important part of the gameplay loop as enemies get tougher as you go through the game so any extra offence and defence will only help but it will cost you a lot as the best gear will cost a couple of thousand gold each in the end game. It does help to level up and farm experience but new gear is a fast track to better stats. Speaking of experience, one criticism I have about Sword and Fairy: Together Forever is that there is no huge celebration when a character levels up, you can see your level-up status in the backend of the game and isn’t really in your face in the UI like other RPGs. When it comes to Chinese-developed AAA games, I honestly had no idea what level they were striving for as far as the production value of AAA RPGs and I was a little shocked at what the game presents to players.  Also, the game’s cutscenes are impressive, striking and beautifully rendered. As far as Sword and Fairy: Together Forever‘s game design, there is room for improvement in a world of open-world RPGs – it comes across more like an early last-gen title than any recently released games in this genre. Even though I played the PS5 version of Sword and Fairy: Together Forever there was no real enhancement like playing in 60 fps but load times were relatively fast but like recently released I wish they weren’t there, to begin with.

All this could be due to the game’s budget as making a AAA RPG isn’t cheap but when you do compare it to other games in this genre I love so much. It makes the game seem like a lesser version which from what I played isn’t true, the series has the foundation to be so much more in a possible Sword and Fairy 8. Anyway, a critique I have about the Sword and Fairy: Together Forever‘s presentation is its weird approach to audio design, when you hit enemies the sound that’s heard doesn’t sound what I’d expect – almost alien to what a hit sound would actually sound like. I don’t mind listening to the Chinese voice cast they honestly do a stellar job but the lack of an English voice cast option might put off the gas,e like people who don’t enjoy reading subtitles. Even as someone who likes reading subtitles some of the cutscenes were hard to pay attention to as there was a lot of dialogue that I had to read which is a bit inaccessible as the text is pretty freakin’ small with no way to increase it. The game just doesn’t just have the main campaign but a bevy of side content but side stories and mini-games. Players who complete and win the ‘Free Leaf Fairy’ obstacle courses and the card game, ‘Journey Heaven-Earth’ will earn players the right to get the game’s eighth and final spirit, Xiaoqi to join their spirit squad. Throughout the game, you will find “Spirit Fruits” which help level up your spirits giving them increased stats for when you summon them their real forms in battle.

Sword and Fairy: Together Forever is an enjoyable RPG that fans of the genre should pick as it includes a lore-rich story filled with deities and demons while flipping obvious expectations on their head with an unexpected romance-focused story. The game features some truly impressive visuals that have been enhanced by the developer’s character designs and the fun yet familiar combat during gameplay. It’s not a perfect game by any stretch, it does have its faults in the developer’s approach to design and the lack of an English voice cast but if you don’t mind reading subtitles, I think RPG fans should take a chance on the game.

Sword and Fairy: Together Forever is the latest entry in a long-running franchise and while the game’s world has told many different stories throughout the years it’s not felt at all and is very much a standalone experience for first-timers like me. I honestly got more enjoyment than I thought going into the game that you can beat in 15 to 25 hours if you don’t get easily distracted by side quests like myself.