I didn’t truly appreciate what Nintendo’s hotly anticipated brawler, Super Smash Bros. Ultimate was trying to do until I finally got home and popped in the cartridge. For months, all Nintendo allowed us to test out was multiplayer at local events and some of those play sessions (okay almost all of them) included me getting demolished by expert players or Riley Little. Mostly though, it was Riley.

Since the original way back on the Nintendo 64, I was a fan of the absurdity Nintendo released. This was a fighting game that featured some of my childhood heroes duking it out in spectacular fashion. While the roster was only that of 12 fighters and 9 stages, the series has since ballooned and grown with each release.

I can’t say what drew me away from the series. I grew up with friends who always wanted to play the game, but likely it was my love for narrative and stories growing up. I grew up playing Super Smash Bros. Melee on the GameCube after having traded my copy of Soulcalibur II for it. I think I got the better deal with that one, but my brother was now at the same age I was when his friends came over and they spent all night playing Melee. I left the game with him and never got a chance to dive into the updated game with a bigger roster, more stages, and unlockable content.

After months of waiting, the anticipation of the massive roster reveal, and the uproar of leaving Waluigi out of the game, the ultimate party game is finally here. The roster is largely unchanged but now includes new fighters Simon Belmont, King K. Rool, Inkling, Ridley, Isabelle, Incineroar, and Piranha Plant later. In addition to those fighters, we’re getting DLC combatants, but we don’t know who just yet.

Then, you meet the Echo Fighters. These are combatants who are fundamentally like existing characters but are entirely different characters. We have Ken, Daisy, Richter, Chrom, and Dark Samus. There’s enough difference between each character that they aren’t a simple reskin (having looked into the terminology of previous games) that they don’t simply full a roster slot but add to it in their own way. Ken and Ryu are the perfect examples of this. Ryu is slower but powerful, whereas Ken is faster and flashier.

Let Light Be Your Guide

I spent the majority of my first three days playing the adventure mode. Dubbed World of Light, the mode is the successor to previous games and is one of my favourite things about Ultimate.  World of Light features a shocking cutscene that sees the entire roster, minus Kirby, defeated by the wizard Galeem. The wizard uses his defeated enemies to create moulds of them and add them to his army.

Dropping onto a gorgeous watercolour map as Kirby, you move around the map on predetermined paths as you encounter fighters like Mario. Upon defeating a fighter, they join the selectable roster and are usable when moving around the map. At first, I found battles easy but soon my tune changed. Each battle includes several conditions and usually that favour our opponent. At times, enemies might begin with an item already or have unbreakable armour, making them harder to hit. Others might include more stamina and their movement speed doubled, or they might be slower than normal but hit twice as hard. These conditions only become trickier and more involved but provide a challenge and coming up with a good strategy to overcome them is what makes success sweeter.

Much to my surprise, the map is large, and I underestimated how long my playtime took to finish. Clocking in at around 30 hours, I chipped away at the overworld. Finding places like mines and sending your spirits to explore them to bring back items means they aren’t available in battle, but the risk is worth the reward. Branching paths mean you have choices to make on your trajectory but exploring is so worth it.

What ties into this though, is the inclusion of Spirits. I can’t imagine playing World of Light without them. Spirits are characters that can give your fighters a boost in battle. By equipping your fighter with spirits, you borrow their power in battle and can equip up to one primary and three support spirits. Primary spirits raise your fighter’s attack power, while the three supports allow your fighter to equip additional skills. With an estimated total of 1,297 spirits to acquire, you’ll need to invest your time in earning them.

Also, there’s the Spirit Board, another mode that allows you to gain new Spirts for battle. The Spirit Board is essentially, a bounty board and features 10 random spirits. Selecting the one you want to pursue means facing them in battle. From there it’s up to you to defeat them and acquire their powers, ranging from dozens of franchises and including characters like Daruk, Big the Cat, Revolver Ocelot, and more.

What makes the Spirit Board so fun though, is the difficulty. That’s right, this isn’t an easy mode that doles out free spirits. You need to shed blood, sweat, and tears to acquire these spirits. As I mentioned, some battles are harder than others but the way this works is you can initially equip a stronger spirit and easily win the match, but you earn fewer bonuses. By intentionally underpowering yourself and winning the match, your bonuses are better. There’s also a shared Skill Tree that grants power and defence boosts, enhances movement speed, and more.

It keeps on going and going

At one point, I faced a minor bout of dread. As I explored the menus I simply became overwhelmed at the amount of content there was. There’s a tournament mode for up to 32 players, there’s a classic mode, there’s also Squad Strike and Smashdown, too. Squad Strike is an elimination style mode where either 3 versus 3 or 5 versus 4 battle it out with one character at a time, then swapping to the next fighter as the previous one is eliminated. Then, we have Smashdown, which I enjoyed the most. In this mode, players battle it out and as your team is eliminated, they are omitted from the next round, dwindling the roster with each subsequent match.

I haven’t even mentioned the music player in Ultimate. There are so many tracks I still haven’t had a chance to check each song out. With over 800 tracks available, there’s so many collaborators and remixes thrown in that you won’t likely come across the same song. Creating playlists of my favourite songs is easy and the ability to turn the screen off and jam along is a welcome surprise.

Switching between docked mode and handheld mode I noticed little difference. That’s good because the game runs smoothly in both capacities. While I prefer playing this game docked at home and on a big screen taking Ultimate on the go works. I expected minor performance issues but am I glad I was wrong here because a game of this magnitude suffering those issues would not be good.

Super Smash Bros. Ultimate is the ultimate party game. Masahiro Sakurai’s created a game that appeals to every time of gamer, be it a casual brawler or a high-level professional. With one of the biggest rosters to date and the addicting World of Light adventure mode, this is a game that features a single-player mode as good as the chaotic multiplayer it’s known for. Celebrating the history of not only Nintendo’s franchises but the all others brought to create this meticulously-crafted game is no joke. In the years since I’ve left the series behind, jumping in with Ultimate feels like the best time to return to the iconic Nintendo series. I might have missed out the previous games, but this version consolidates the best parts of every other entry and delivers on all fronts. With gameplay that’s fast and fluid, and constant rewards for success, this a game that’s going to dominate the charts for a long time. The expansive roster, stages, and music are chock-full of history and nostalgia and there’s something so refreshing about seeing so much variety in one game.

[A copy of the game was provided to us by the publisher for review purposes and while online funtionality isn’t available just yet, we will return and talk about that]

Bobby has been gaming since he was old enough to walk. Since then, the interest has only grown stronger, and here we are today. 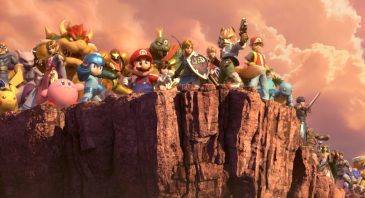