Stop me if you’ve heard this before – I missed out on Super Mario 3D World back on the Wii U because I didn’t own the system. I’ve said this about nearly every exclusive title that launched on the console but it’s true, I had zero incentive to buy the console or even consider it because it felt like a huge misfire for Nintendo. Not that it was necessarily a bad ecosystem but it certainly wasn’t the one for one at the time but thankfully Nintendo delivered a wildly successful follow-up with the Nintendo Switch and it’s all but absorbed all the exclusives now.

Missing out on Super Mario 3D World was always a sore spot for me, I’ve played every Mario game since I could remember. I’ve collected every console and built a small collection over the years with one exception. Coming back to an older title after completing Super Mario Odyssey feels like cheating since Nintendo continually improves and perfects the platforming genre with each new game but in this case, after spending time playing Super Mario 3D World, the fact of the matter is that Nintendo perfected the genre years ago.

Now I know that this is the more traditional 2D Mario game but it’s also the one that I’ve found that caters to fans of the more classical iteration of Super Mario titles and fans of the 3D adventures that continually impress. Nintendo has this impossible task that’s absolutely daunting to me – continually improving on perfection and make it fun for everyone. And somewhere, they continue to manage expectancies and deliver thoughtful, engaging, and exciting gameplay with every new (and in this case old) game. 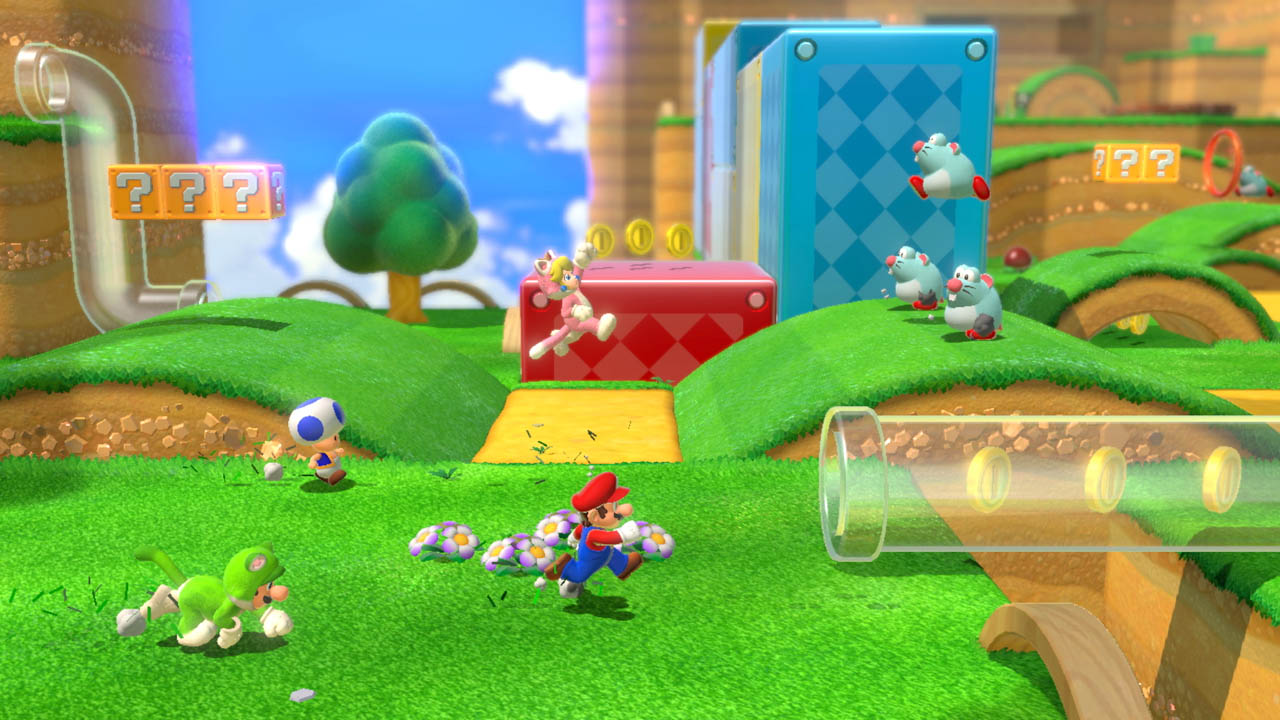 Serving as a jumping point from Super Mario 3D Land, the team at Nintendo expanded on the success with Super Mario 3D World. It’s an excellent game because it expands on everything that made 3D Land so great, completely refining the experience for a new console. The core experience is playing with friends but because of the current ongoing pandemic, gathering four friends locally to play this is impossible but it’s also an experience I’m looking forward to when things open up. That said, Nintendo has added online multiplayer but as of this review, it wasn’t available to test out and I’ll report back once I spend some time exploring the added online multiplayer.

Whether you play with friends or alone, you’ll have a blast

For starters, it is nice to be able to play as either Mario, Luigi, Peach, or Toad and switch between them on a whim. The four included characters have their own strengths and weaknesses. If you’ve played Super Mario Bros. 2, the characters move the same. 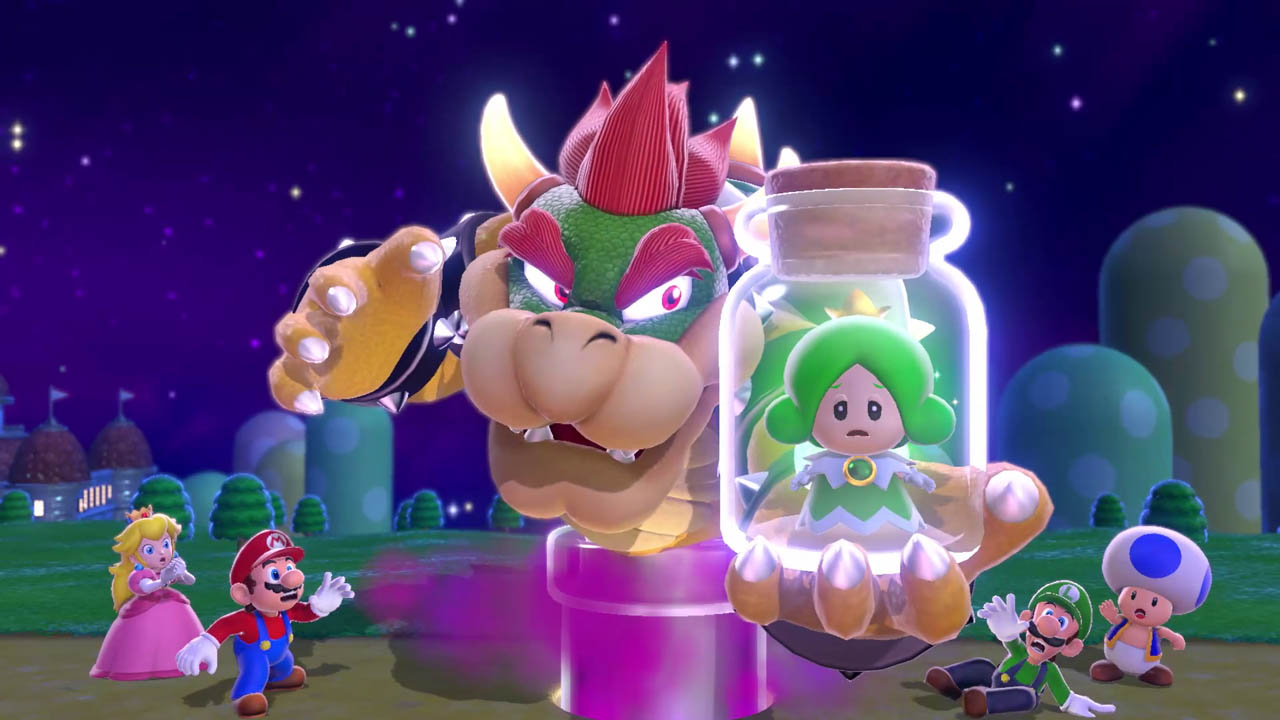 Mario, for example, is the most balanced while Luigi jumps higher and has lower traction. Peach can float but runs slower, and Toad is the faster but his jump is weakest. In Super Mario 3D World, up to four players can play together in each level. Years ago, I’d likely stick to playing as Mario from start to finish but I actively engaged with the other characters to see how different they each were. I’m left impressed by how much fun Luigi plays and the added challenge of timing jumps precisely to press forward. On the flip side, playing as Toad taught me that speed is not necessarily your friend in a game where timing and patience are practically required. Taking Peach through a gauntlet of levels is as much fun as I remember from when I was a kid – the Sprixie Kingdom has no chance of falling in the wrong hands.

From the level design to the soundtrack, I’m impressed. This game is excellent and this game plays and sounds both in handheld mode and while docked. Many of the levels are short and a ton of fun to complete. Even replaying said levels is fun because of how smart each level is. 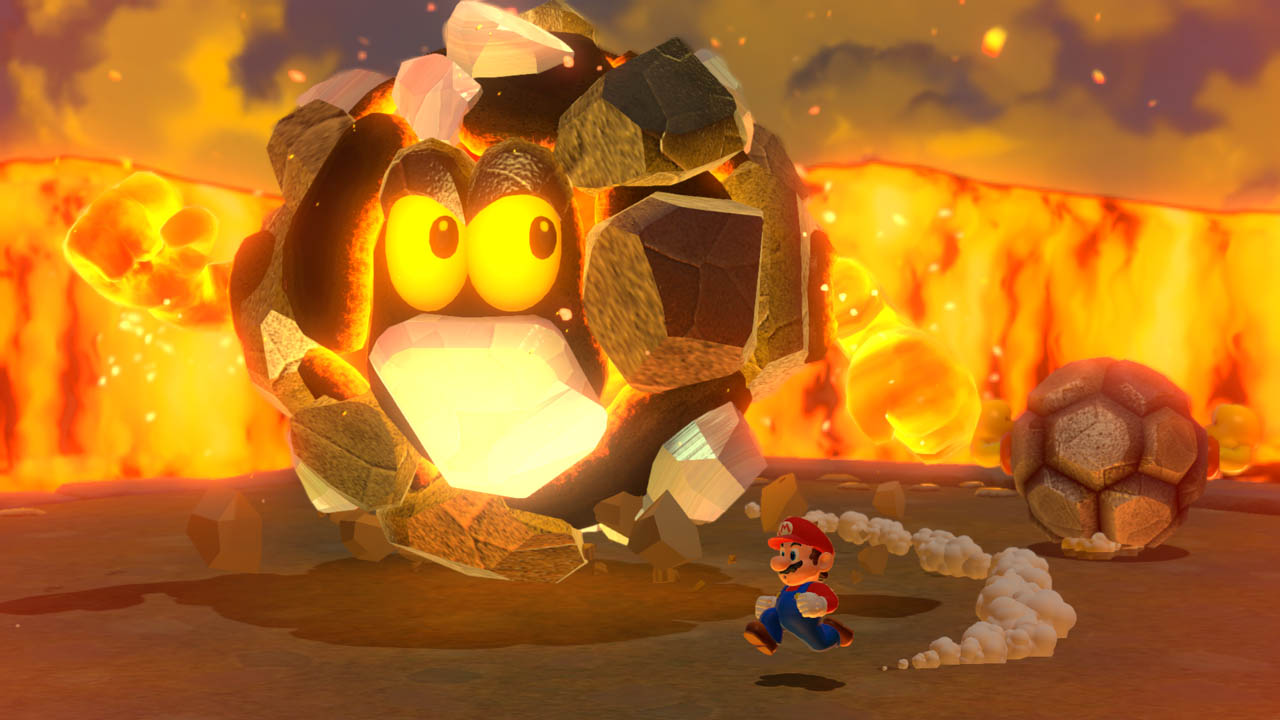 The biggest addition, of course, is Bowser’s Fury, a new mode that sees Mario and Bowser Jr. travel to Lake Lapcat. Bowser has been tainted by a mysterious black goo that makes him unruly and you’ll need to travel across several islands in an open world to gather the Cat Shines to stop him. Each one is acquired by completing a series of platform challenges and when brought together are strong enough to stop Fury Bowser. 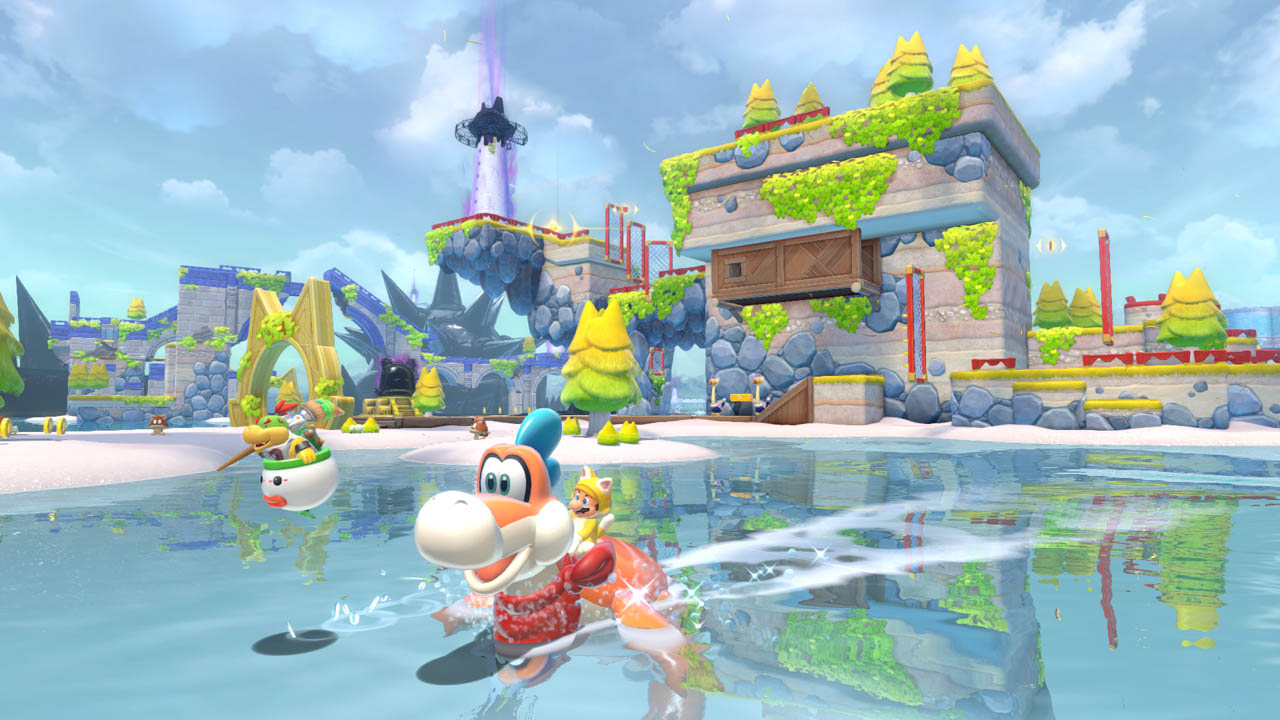 You and one other player can work together in Bowser’s Fury, one playing as Mario and the other playing as Bowser Jr, who uses his Koopa Clown Car to get around. In total, you’ll collect 100 Cat Shines across several islands. The idea here is to collect all the Cat Chines so Mario can combine them into the Giga Bell, this allows Mario to transform into Giga Cat Mario, allowing him to tackle Fury Bowser. And while you’re collecting the Cat Shines, you’ll need to watch the horizon for the Fury Sun, as the weather gradually gets worse, it means Fury Bowser is emerging and he’s ready to devastate Lake Lapcat.

When Bowser decides to get up and cause a scene, you’ll likely be in the middle of collecting another Cat Shine somewhere on the island. If you end up being caught in the middle of a temper tantrum from Bowser, you have limited options: make a beeline for the Cat Shine or do your best not to be caught by the fire and rage Bowser is about to drop on you. I found the best thing to do is stay afloat because too many times I’d end up trying to complete a tricky platforming section whilst dodging massive fireballs. The chaotic nature of Bowser’s means you need to be ready to drop everything. 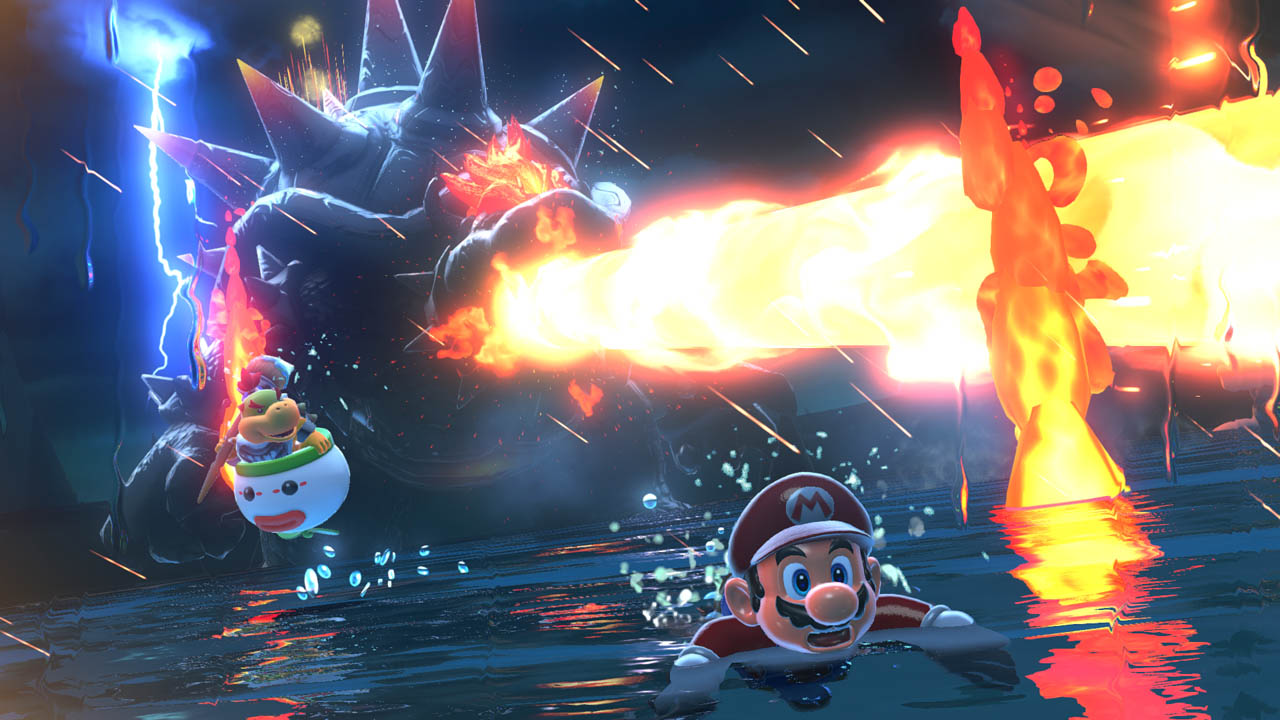 As great as Bowser’s Fury is to play, there are noticeable issues when playing handheld. For most of my time collecting Cat Shines, I had few issues. When Bowser is awake and grumpy, the game’s frame rate drops considerably and it makes playing in handheld mode much harder. For a nearly four-year-old console, I hope the rumblings of a more powerful machine ring true. Nintendo’s beautiful, colourful worlds are bolstered with tech that’s a generation behind.

Super Mario 3D World + Bowser’s Fury is an absolute must-play on the Nintendo Switch. It’s got so much charm and engaging gameplay that I can’t stress how important this game is to the legacy of the Super Mario series. It’s the culmination of 30 years of improvement and reiteration and it is paired with innovation that only Nintendo consistently delivers. If you can gather four friends to play together post-pandemic (or online with others!), you won’t find a better game to enjoy as a group (except maybe for Super Smash Bros. Ultimate) but with online multiplayer built-in, you may have an alternate way to enjoy each other’s company these days.