Nintendo properties sell like hotcakes. So, the limited-time release of Super Mario 3D All-Stars, a new compilation that includes Super Mario 64, Super Mario Sunshine, and Super Mario Galaxy, has already succeeded expectations. It’s sold out on Amazon, Walmart, Gamestop, and a best-seller before even launching.  Even in the UK, Base, an electronics retailed is cancelling pre-orders due to “woefully short” allocation of units. Nintendo is following the Disney trend of releasing media before sunsetting it into the illustrious Disney Vault. As a kid, it made me ask my parents to pick the VHS tape up before it was gone for good.

I’ve played every Mario game a dozen times over, none more than Super Mario 64, the game that I was given when my relative handed his Nintendo 64 over to me. I haven’t played the original in years, but I dabbled in the Nintendo DS port which was a great upgrade at the time. On the Nintendo Switch, the original game is as much fun today as it was in 1997. Big Boo’s Haunt, Peach’s Castle, Dire, Dire Docks, Jolly Roger Bay to name a few, all receive a visual overhaul. Testing Super Mario 64 docked and on my Nintendo Switch Lite, the game runs at 720p and keeps it’s 4:3 aspect ratio from the original. 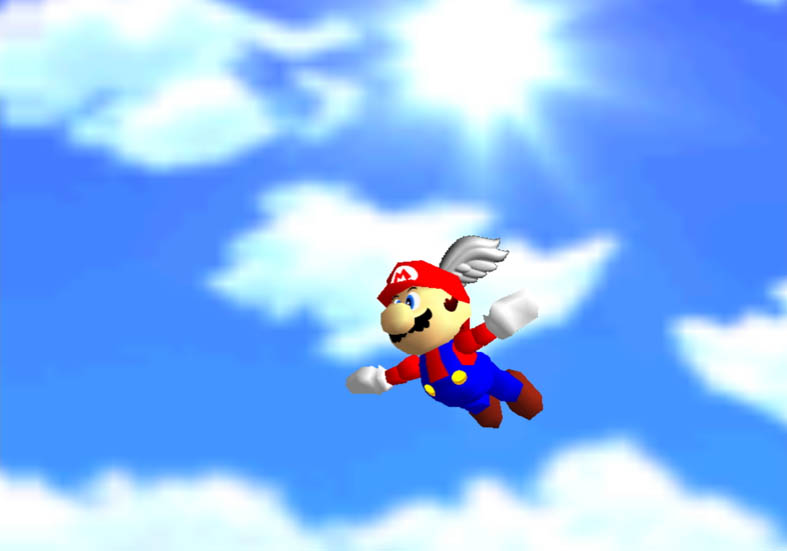 Thankfully, it’s such a classic game that it continues to be fun because the core gameplay is so simple. Nintendo includes Joy-Con support and HD Rumble is a nice touch, to top it off, the entire soundtrack comes as a bonus in-game so you’ll have the luxury of checking out dozens of tracks whenever you desire.

The biggest drawback for me is the camera, while the levels all hold up, the camera is fixed and having been blessed with newer games offering an adjustable camera. It’s a novelty we’ve come to not even think about and games 20 years ago worked with fixed viewpoints; any freedom felt novel at the time. Thankfully, the fundamentals of gaming have evolved over the years and exploring 3D environments changed over time. Having to remember the camera’s position to time jumps and line up movement can be a nuisance. 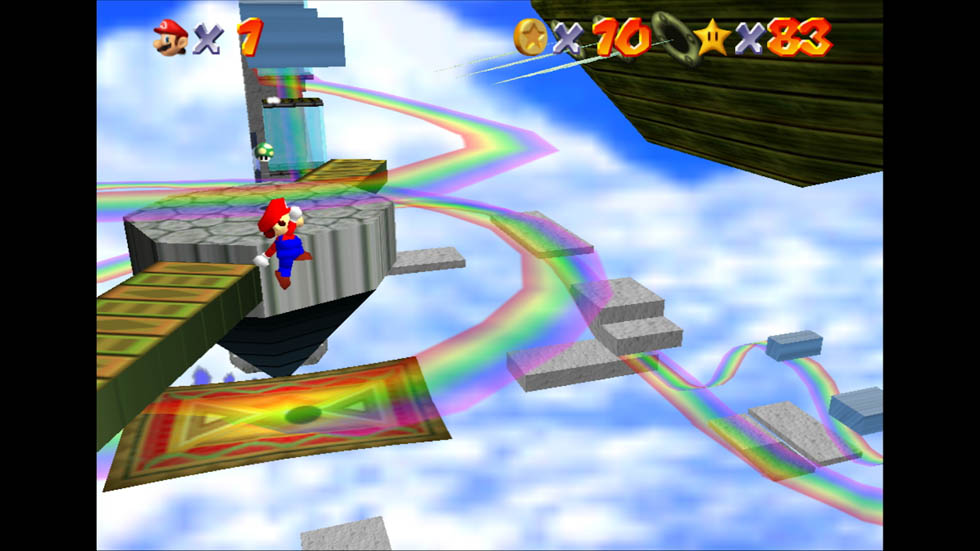 Thank you for purchasing from Gadd Science

In 2002, Super Mario Sunshine arrived on the Nintendo GameCube. Travelling with Princess Peach and Toadsworth, and the royal outfit to Isle Delfino for a nice vacation, things go awry the minute Mario deplanes. On the Delfino Airstrip, Mario is accused of defacing the town with graffiti and he is sentenced to clear the mess up with the help of FLUDD With his new tool, Mario must clean up the mess made by Shadow Mario, an evil doppelganger that resembles Mario but uses a magic paintbrush to mark the town in graffiti. 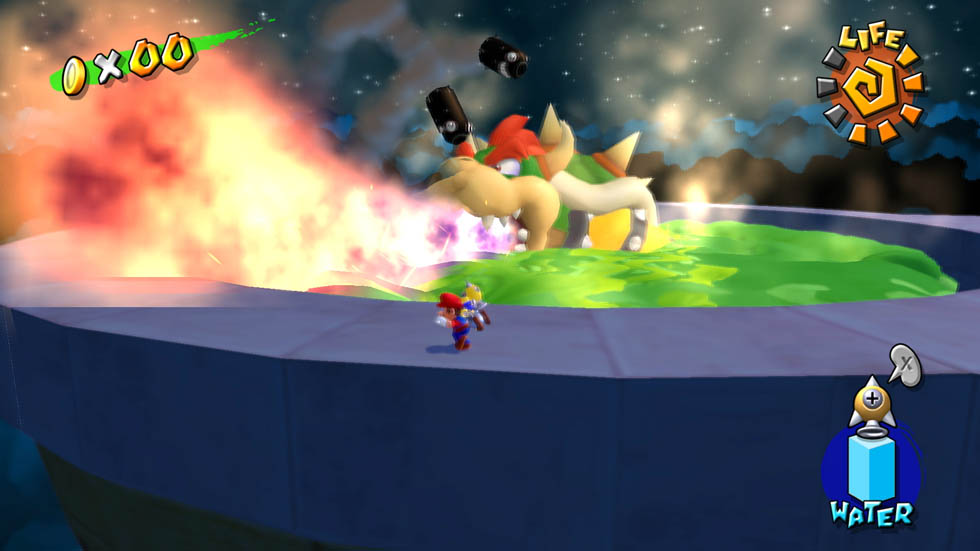 At the time of release, Super Mario Sunshine was touted as an evolution of Super Mario 64, a game that had previously revolutionized the 3D platformer. Nintendo refined the controls and mechanics and dropped Mario into a new location and the idea was hit. With the help of FLUDD, Mario’s gameplay had something new that wasn’t just about the platforming, and by having a backpack that sprays water is an innovative wrench into the iconic style we’ve known for so long. Mario’s new backpack not only sprays water but it turns into a jetpack,  it helps when platforming and the additional nozzles for FLUDD include the Rocket Nozzle and the Turbo Nozzle. 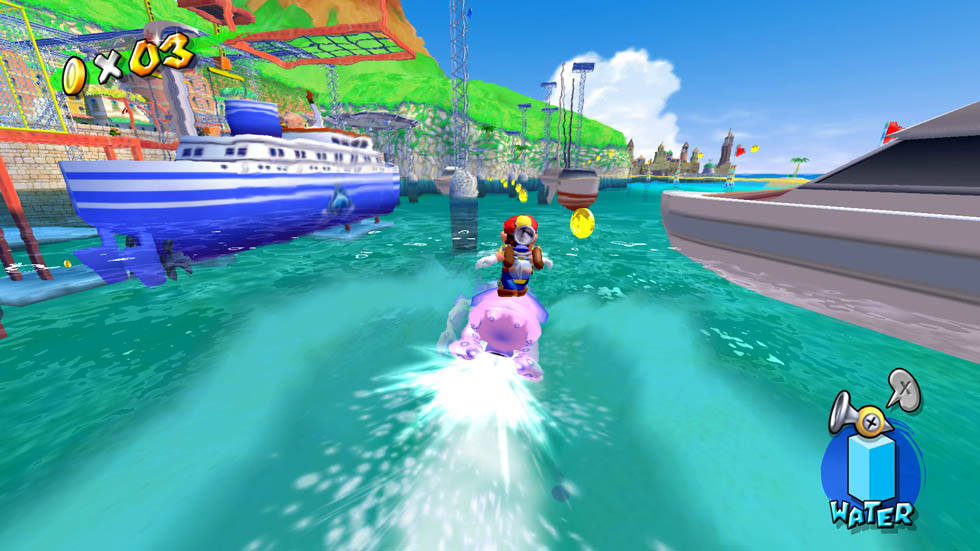 Playing through Super Mario Sunshine is a nostalgia-filled vacation for me. All those years ago, I remember staying up late to play every night. Learning how to use the F.L.U.D.D to navigate the trickier platforms later on in the game. By the end of it and through the years, I find the FLUDD mechanic to be more of a burden than anything and effectively becoming a lifeline when mistiming a jump or awkwardly reacting to the situation.

Super Mario Sunshine runs well on the Nintendo Switch with both docked and handheld mode performing extremely well. In Docked mode, Super Mario Sunshine chugs along at 1080p, and handheld mode 720p with no issues. If you told me this is a brand new game, I’d believe you. My biggest gripe is still the controls, which even with an update feel lacklustre.

What I found to be counter-intuitive in Super Mario Sunshine, is balancing the fantastic platforming sections with awful camera angles. Sure, you’re free to maneuver the camera but the way this was designed had little to do with how it worked when playing. Things turn cumbersome when trying to land jumps an having to ensure the camera doesn’t think for itself and auto-corrects what I’m looking at. 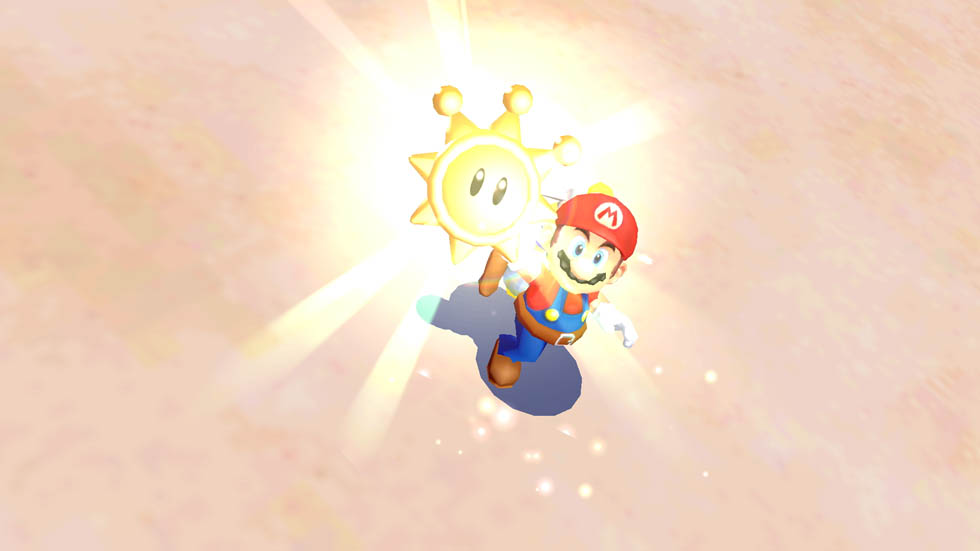 Welcome to the Comet Observatory!

Nintendo also included my personal favourite iteration of the 3D Mario titles in the Super Mario 3D All-Stars: Super Mario Galaxy. When this game launched in 2007, I was over the moon with excitement. Like many Mario games, Princess Peach invites Mario to the castle to celebrate the Star Festival, before being abducted by Bowser and a fleet of airships wreak havoc across the Mushroom Kingdom. Not long after all the commotion, Kamek ejects Mario into space, where he meets Rosalina and the Lumas (star-like creatures that appear and support Rosalina). 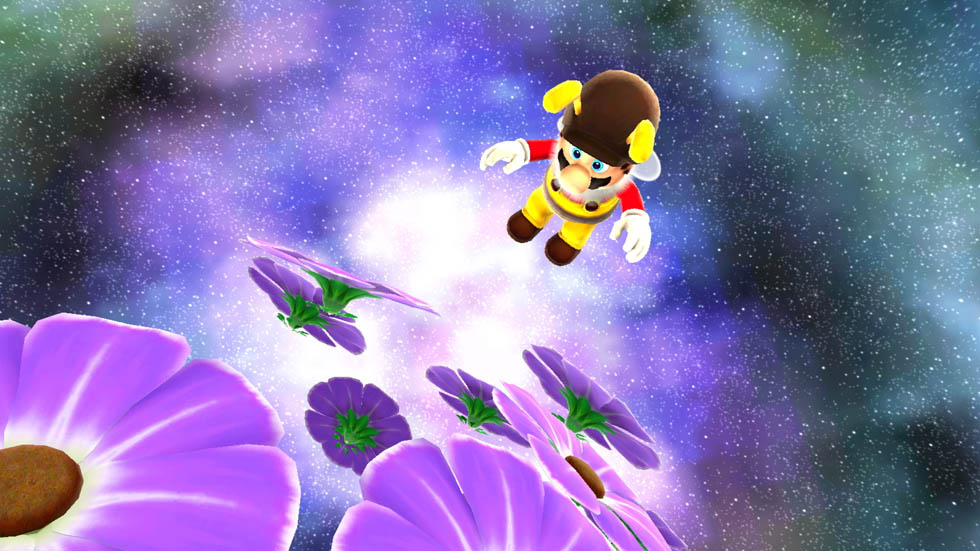 Incidentally, I didn’t find the jump from Super Mario 64 to Super Mario Sunshine that to be that much of a shakeup. Instead, it took Nintendo until Super Mario Galaxy to make a huge splash. Everything that made Super Mario 64 an iconic title was found here: great controls and excellent levels. And the use of the Wii Remote and Nunchuk were intuitive and easy to use. Those things are what made this a special game and by Nintendo realizing this, they crafted one of the best Super Mario games of all time. In 2007, Super Mario Galaxy was an inventive and mind-blowing experience. In 2020, Galaxy is still as charming and exhilarating to play, thanks to the timeless design of the game. 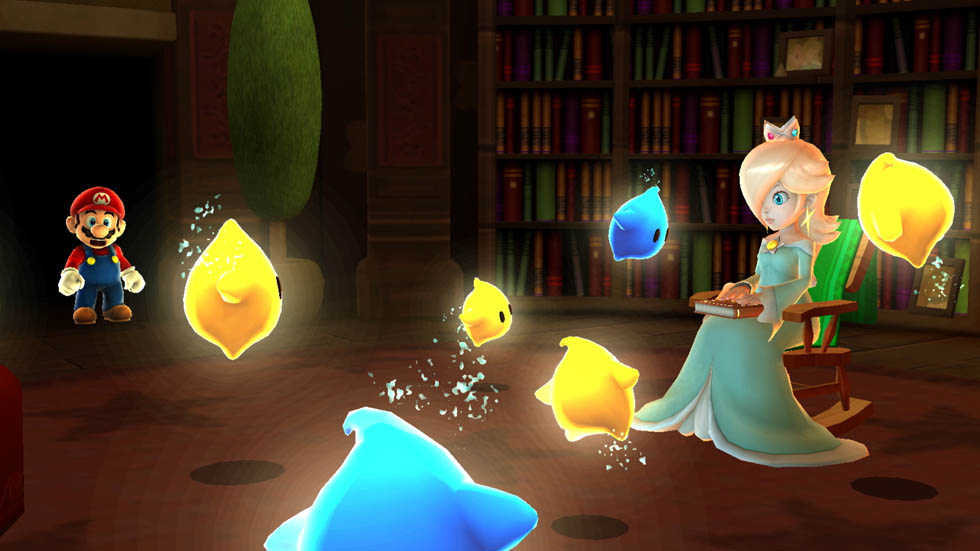 Conversely, the gimmick the Wii Remote brought forth is still used today with the Joy-Con controllers. Wagging around the Star Cursor returns and thankfully works well. The Star Cursor enables Mario the ability to collect Star Bits, shoot Star Bits and enemies to daze. Also, you use the Star Cursor to control the Sling Pods and Pull Stars to get around the galaxy. Being included in the Super Mario Bros. 3D All-Stars means Nintendo updated the mechanic for Nintendo Switch Lite. You’ll find the experience to be the same when docked at home, and you can even use the Pro Controller but in handheld mode, you can use the touchscreen to grab Star Bits. 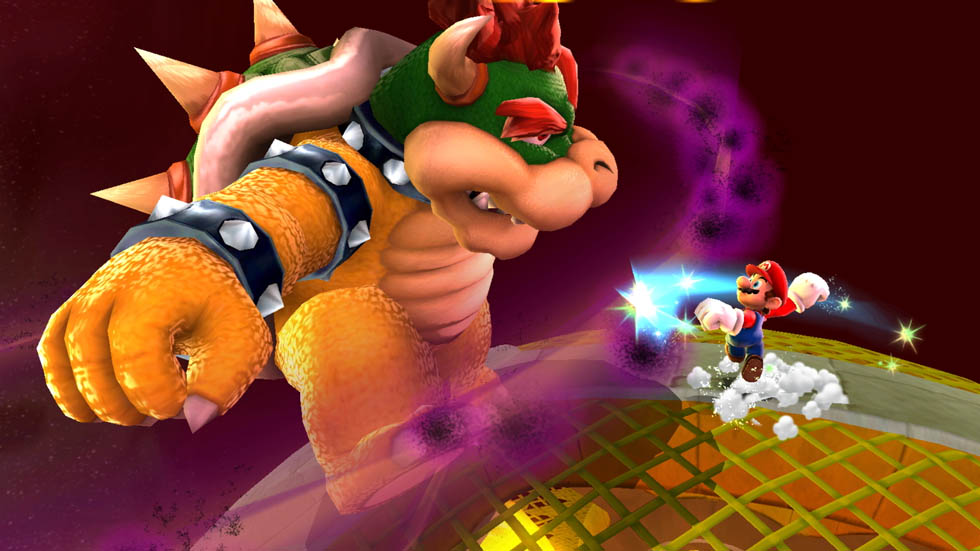 Out of all three games included in the Super Mario Bros. 3D All-Stars bundle, Super Mario Galaxy benefits the most from being enhanced for the Nintendo Switch. Docked, the game runs at a smooth 1080p while handheld runs at 720p. I noticed no slowdown, no lag and generally the port is wonderful.

My biggest disappointment is Super Mario Bros. 3D All-Stars only includes the first Super Mario Galaxy but not the second game, which was an overall improved game with bigger galaxies, better bosses, power-ups and offered more of a challenge. Not including the superior game is a head-scratcher that I hope Nintendo sheds some light on in the future. 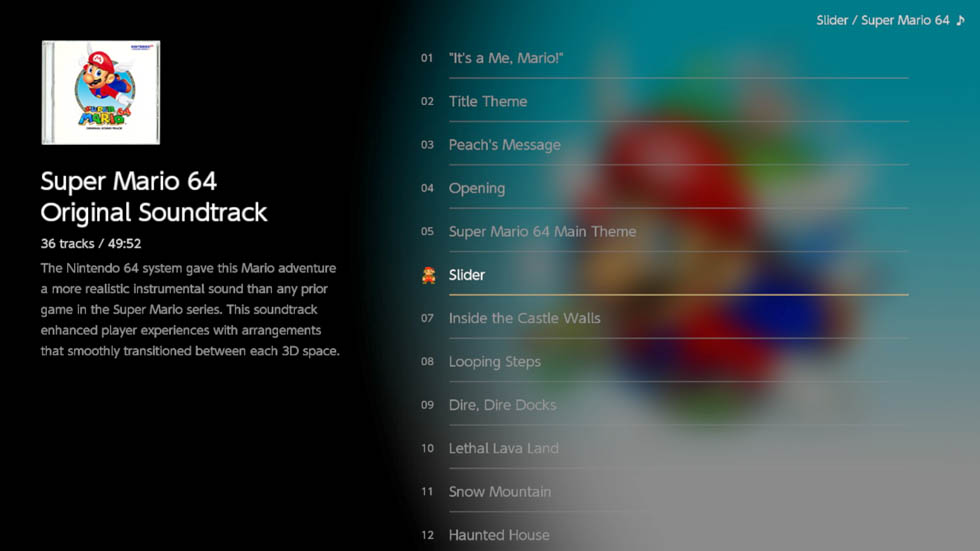 Nintendo is having a great year once again and while I know there is a mixed reception on their game output this year, but I’m happy they have fall gaps in place to give their consumers some options. Even if you’ve already played any of three games in this bundle, Nintendo’s art direction is timeless and the graphical upgrades prove how thoughtful Nintendo’s game design is. While there aren’t many extras included, the included soundtracks for Super Mario 64, Super Mario Sunshine, and Super Mario Galaxy are a nice touch.