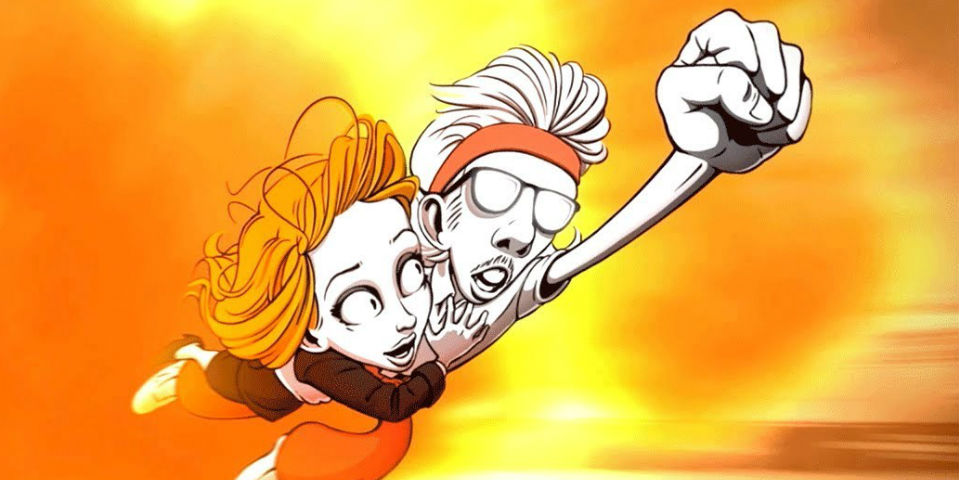 A lot of people look back in horror at their days in High School. Whether it be struggling with grades, bullies, or just general disdain for school. But I’m sure none have had it quite as bad as the titular hero of Super Daryl Deluxe. Daryl is the newest student at Water Falls High School, a derelict institution that he wants to be the most popular resident of. Unfortunately, this sends him down a road that gets him involved in a textbook racket, brawls with science class beakers, and a mystery that he basically has no choice but to try and solve.

Easily (and by far) the best thing about this game is it’s looks. I absolutely love the art style used for the game. It uses colors in ways I’ve never really imagined. Somehow this game has managed to make greys pop! The artist seemed to really know his colors. Having Daryl wearing vibrant colors like red and making the backdrops matte, off-shade colors was genius because it makes this tall lanky dude stand out even more. The character designs are all really cool. The villains all look cool. Even each student stands out in the school with their own style and color scheme. Super Daryl Deluxe is really…stupid. But definitely in a good way. The same way Napoleon Dynamite is a good movie, but also a really stupid one. It helps when the game doesn’t take itself too seriously as well. The humor in the game is great. Lots of fourth-wall breaks too, like telling you the controls per the keyboard and then remembering you’re playing it on a console. There’s a lot of small references and easter eggs to popular nerd culture thrown in which I love, for instance; the vice principal is a robot and his name is Mr. Robatto and the Styx fan in my became excited by this.

I love the story that this game tells. It manages to tell a pretty solid story while still being full of hilarious dialogue and dumb jokes. The writing manages to be as smart as it is stupid in parts. When you’re a bit along in the game you’ll start to meet famous people from the past and this is where the writing truly shines as these figureheads start joking about their accomplishments and their own importance to the world. Super Daryl Deluxe at the end of the day is a platformer. That being said, the platforming elements are great and they work without any issues and it’s a lot of fun. Throughout my multiple hours of experiencing the game I never once had an issue with the platforming and that’s rare to say because I usually have trouble with shoddy platforming mechanics.

Unfortunately, I found the combat to be extremely tedious. I grew tiresome of battles very quick and that’s not exactly ideal for a game of this nature. The prologue/tutorial intro is where this blemish makes itself very apparent. It’s just wave after wave of the same bad guy. The combat moves are boring and I couldn’t really get a hang of any of the moves you’re provided with as they all had odd cooldown rates. This isn’t all bad as later on in the game you get the ability to switch out moves so I eventually found something I did like. But if I judged the game based on the intro alone there would be issues. The enemies took a surprising amount of time to defeat compared to enemies encountered later on in the game. I’m a little bit disappointed by the lack of VA work in the game. The only voice work in the game comes from the cutscenes meaning all in-game dialogue is left to your own imagination. When I saw the trailer I assumed the game would have a decent amount of voice acting but I guess I was wrong. Although making up voices for some of the characters was a bit fun.

Super Daryl Deluxe is a $19.99 game that is worth every penny but priced any higher would be pushing it. I had fun with the game through its campaign and despite my issues, the good prevailed. The stupid nature of the game is definitely not a turnoff, as it doesn’t overdo it. I loved all the jokes and references, and the story was definitely a highlight. The game’s look is definitely where everything shines, though. From the animations to the scene art and character designs, everything about the look is great. If you like Napoleon Dynamite then maybe this game is worth checking out.