When The Stanley Parable first came to PC in 2013, it was always a game I wanted to experience first-hand but didn’t really have the motivation to pick it up on Steam as I’m more a console player than anything. So getting the chance to experience the game in a quasi re-imagining and expanded version in The Stanley Parable: Ultra Deluxe on consoles was a dream come true. Finally getting into the game, my first impression of the first-person narrative adventure at the time was that the game’s writing is absolutely brilliant and in my later playthrough, my opinion of the game’s narrative did not change one bit.

Getting into the game’s story, The Stanley Parable: Ultra Deluxe‘s narrator introduces the player to the titular character, Stanley aka employee 427 where his job is clicking a bunch of buttons and how long to push them following order prompts at his office computer. That all changed one day when Stanley noticed no orders were coming in after an hour he wonder what was going on and decided to leave his office, this is where the game actually starts.  After finally getting control over Stanley, it’s easily noticeable that the office is completely empty and no one is around which continues to be a fixture throughout the game as Stanley is physically alone in the game. The voice of the narrator, played by Kevan Brighting, however, is what keeps Stanley company for better or for worse with his British delivery that is both intentionally annoying and amusing as the voice of The Stanley Parable: Ultra Deluxe.

Can the Narrator be Trusted?

The player has the choice (which is a concept that is constantly revisited) of following the narrator’s direction, going through the left door as instructed by the narrator you head towards the office of Stanley’s boss. The narrator helps out Stanley and gives the player a code to a secret door that reveals the underlining plot of the company Stanley works for which is that they have been mine controlling Stanley and every employee the whole time. After going through the mind control facility, the player has the choice of turning off the power to the facility. Doing so reveals the exit and Stanley is free to leave, that’s the end of the story of The Stanley Parable: Ultra Deluxe… or is it? 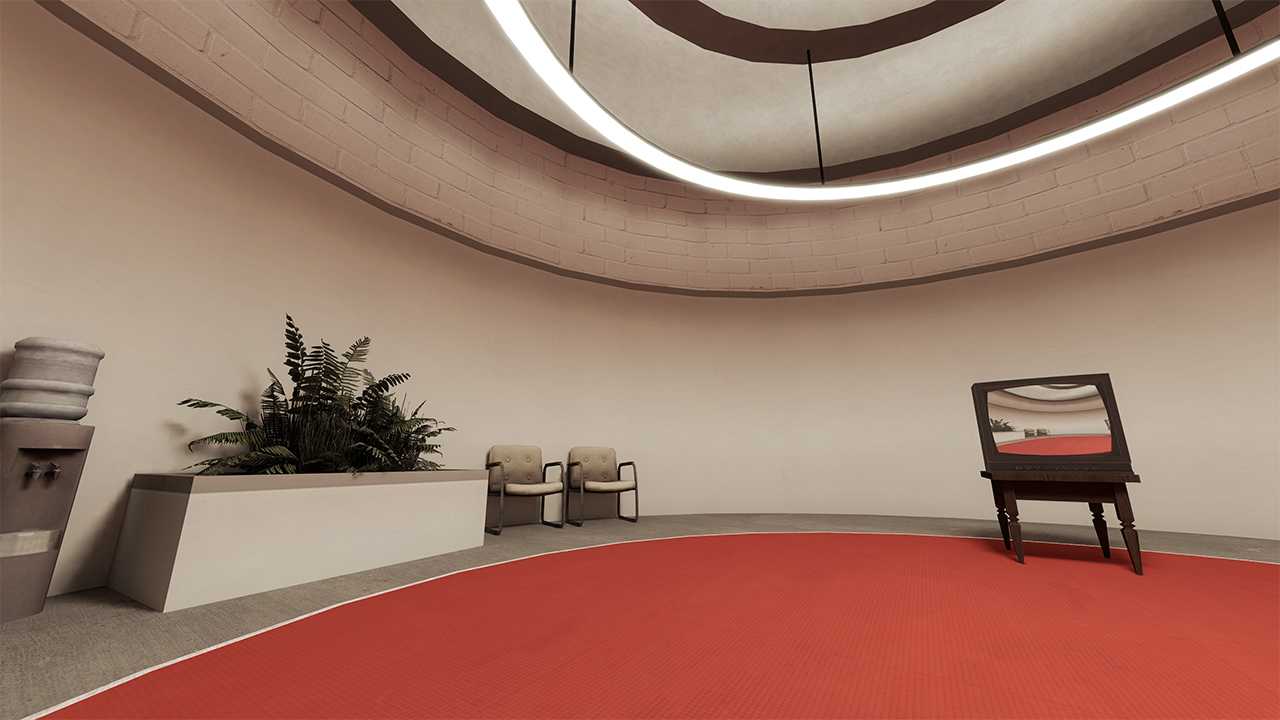 It’s not as it’s never that simple with these games as that ending we’ve gone through is actually one of the many endings in the game, only 20-ish of which are from the original game as there is a combined 40+ endings in the expanded versions of the game. This is where the idea of choice comes back into play, as you can choose to completely ignore the narrator and do what you want, whatever that choice may be the narrator is begrudgingly there for the ride to do his job and narrate those diverging paths you as the player want to take. Most endings lead to the player respawning back to the beginning of the game in Stanley’s office and doing everything over again but with a different approach.

There Are a lot of Endings to Dive Into

If you’re like me then you’re probably determined to see every ending, right? Well, not every ending is made equally as there are some ridiculous endings. One that I love is the broom closet ending, which is comedic at times if you choose to spend multiple times in a broom closet for a long period of time. The reason is the narrator can’t stand the player doing nothing in the room, the narrator gets to a point where he insults the player and when that doesn’t work just leaves you to your “business” until you come out, revisiting the broom ending more leads to the narrator nailing wood planks to the door frame to stop you from going back in there. For me, the ending is a great reminder of annoying someone becoming entertainment, I got a lot of joy from annoying the narrator which is very easy but it’s not it works the other way around. 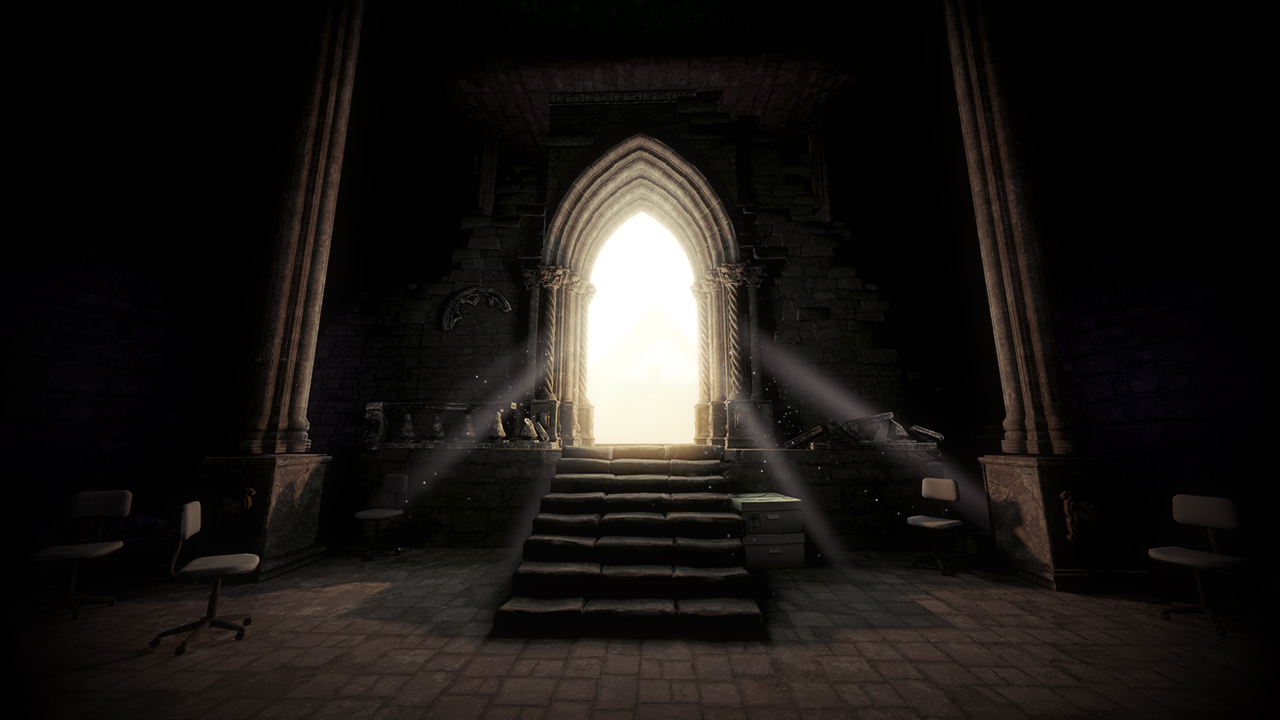 Other more serious endings involve you trying to take control of the mind facility which leads to the narrator blowing up the whole building in a countdown sequence. The brilliant thing about this ending is the time the narrator gives you, like in any game when you’re given that much time the thought of ‘oh there must be something in this room I can use to avoid this.” The narrator brilliant takes that expectation and puts that on its head as you are searching and searching but nope absolutely nothing can be done. The narrator even smugly mocks you for even thinking that way “oh Stanley you’d think I would make it that easy?” The ending leads to the game’s rare deaths it feels inconsequential as you are respawned back in Stanley’s office.

The Narrator is Very Self Aware

Going through the other endings really helped me get a better understanding of the game’s story. I mentioned choice, in order to get more story you really need to go against the story that the narrator has laid out for the player. I do really consider the narrator as the game’s villain as it’s just you and him in the game making each other go crazy. His commentary and your choices go hand and hand, they push the narrative forward to a new height. I do love how self-aware the narrator can get, as the more you play the narrator realizes that the one going against him can’t be Stanley as it’s not in his nature and realizes that he has been dealing with ‘you’ the player which at times get’s really meta how the narrator is breaking the fourth wall in his self-awareness. 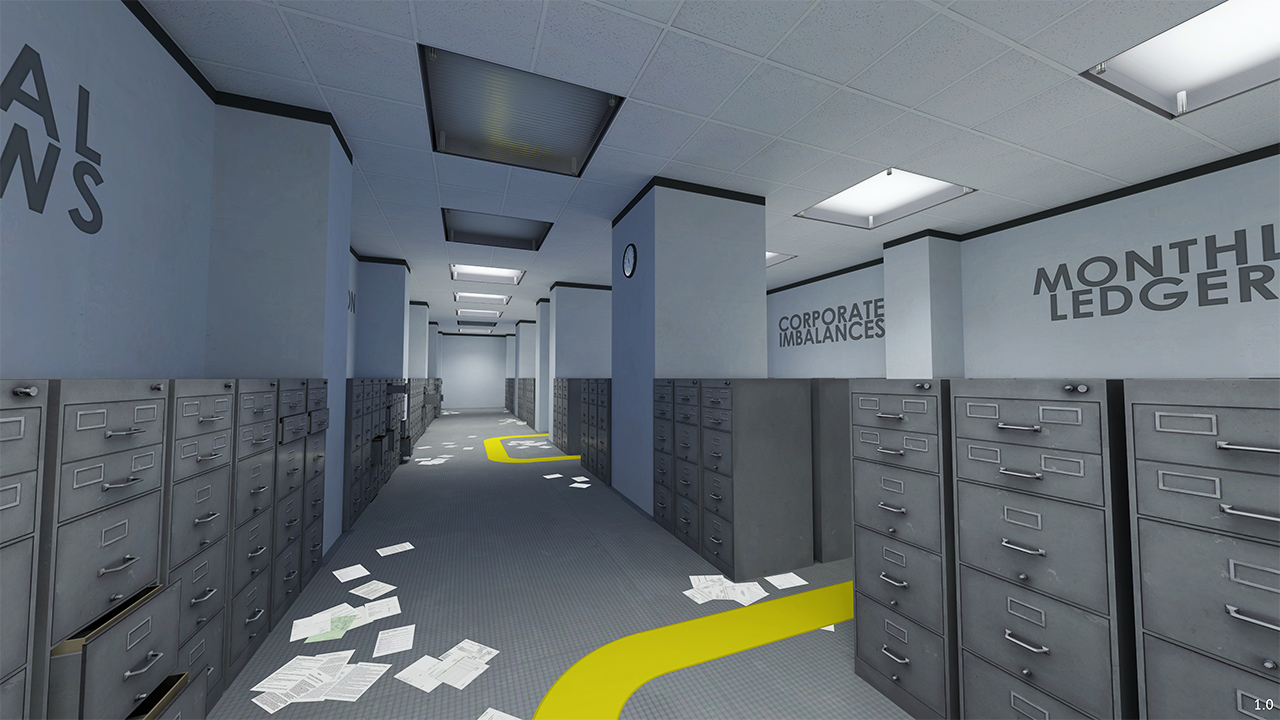 The expanded version goes an extra step with the narrator complaining about the added new content not being good enough for his standards and saying he’s gonna complain to the devs, tell them they don’t know what they are doing and that they are not good. So all that is brilliantly a commentary on current gaming culture with ‘gamers’ need and want to put down game developers for not doing what they wanted be it motivated through misogynist, racist, or other hateful reasons. This sequence leads to another The commentary on gaming culture with the narrator going on a nostalgic trip of what made the original Stanley Parable so great featuring some old reviews from outlets like Destructoid; even rightly correctly changing the original reviewer’s name from Jim Sterling to Stephanie James Sterling which was great to see. Overall the new content warrants this new release just not content alone but the context of this game is available to consoles, an audience that never had a chance to pick up the original The Stanley Parable. 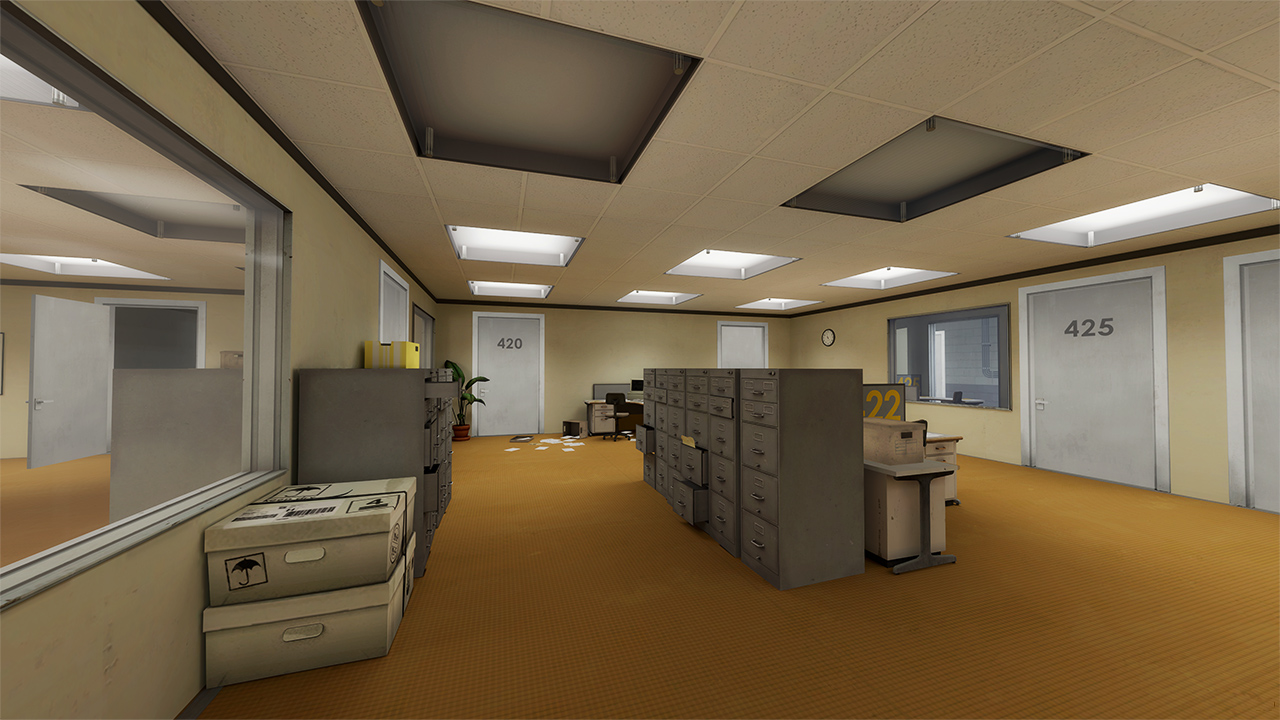 The Stanley Parable is More Story Than Anything Else

I’ve talked a lot about the game story but as for the gameplay there really isn’t much to say, if you played walking simulators like Gone Home you know what to expect – a lot of walking around, clicking and not being able to look down at your legs; which the game jokingly acknowledges. For certain endings, the gameplay can be annoying, one ending, in particular. In the baby clicker ending, Stanley clicks a button every couple of seconds for four hours that is really annoying if you go down that road but is totally optional with no real award so it can be avoided if the player wants.

Similar to the gameplay, The Stanley Parable: Ultra Deluxe‘s visuals and graphics are not something I would go up to bat for. This is a part of the game where 2013 stuck around, specifically with Stanley’s character model which shows up thankfully from a distance during a credit sequence but still doesn’t look that great. Environments however while looking remastered from what I can tell look just OK, presentation-wise The Stanley Parable: Ultra Deluxe doesn’t have anything that will blow you away or will disgust the most critical eye; just a nice balance of bland I guess. Music-wise, other than the basic soundtrack music is used more as a tool for a comedic effect to bring out more Looney Tunes energy in some of the endings. 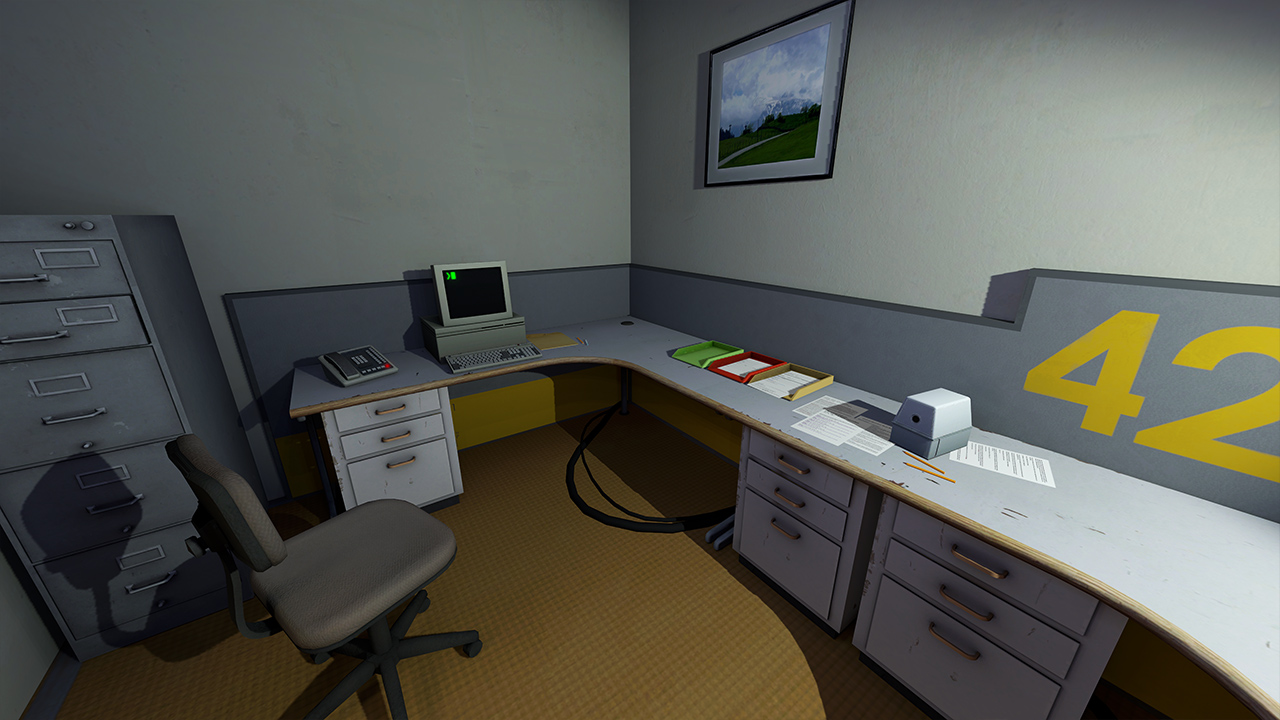 As far as technical difficulties I had with the game when I was an hour into the new content my game crashed and the door that gives players access to it disappeared. No matter how many times I booted up the game or completed an ending it never show up again, this would only change if I reinstalled the game with a fresh save. It was something that kind of took me out of the whole game but not enough to make me think less of it.

The Stanley Parable: Ultra Deluxe is an immaculate game that showcases a deep understanding of narrative and character work carried by the performance of Kevan Brighting as the narrator that gets meta in the best ways possible. While its visual presentation is less than to be desired, it’s not enough to bring the game down as it does one thing, story very well and that alone presented in the game is enough to recommend to anyone who never picked up the original game. For players of the original game, the new content also adds a ton of content that honours the legacy of the 2013 game so it will warrant a revisit of this great game.